PORTLAND — Fresh out of art school in North Carolina in 2002, Jeremy Okai Davis wanted to book a gallery show, but he knew he needed a body of work and a style all his own. So he grabbed the only thing he had – a bunch of portraits he’d taken of friends on a simple digital camera. He printed them out on his dad’s computer, then blew them up so he could paint them.

When Davis blew them up he saw something new: hundreds of pixels; the greens, blues and reds that make up skin tones. Instead of trying to blend those colors back into a smooth flesh tone, he emphasized these colorful pixels in a modern take on pointillistic painting. And he created a style all his own. 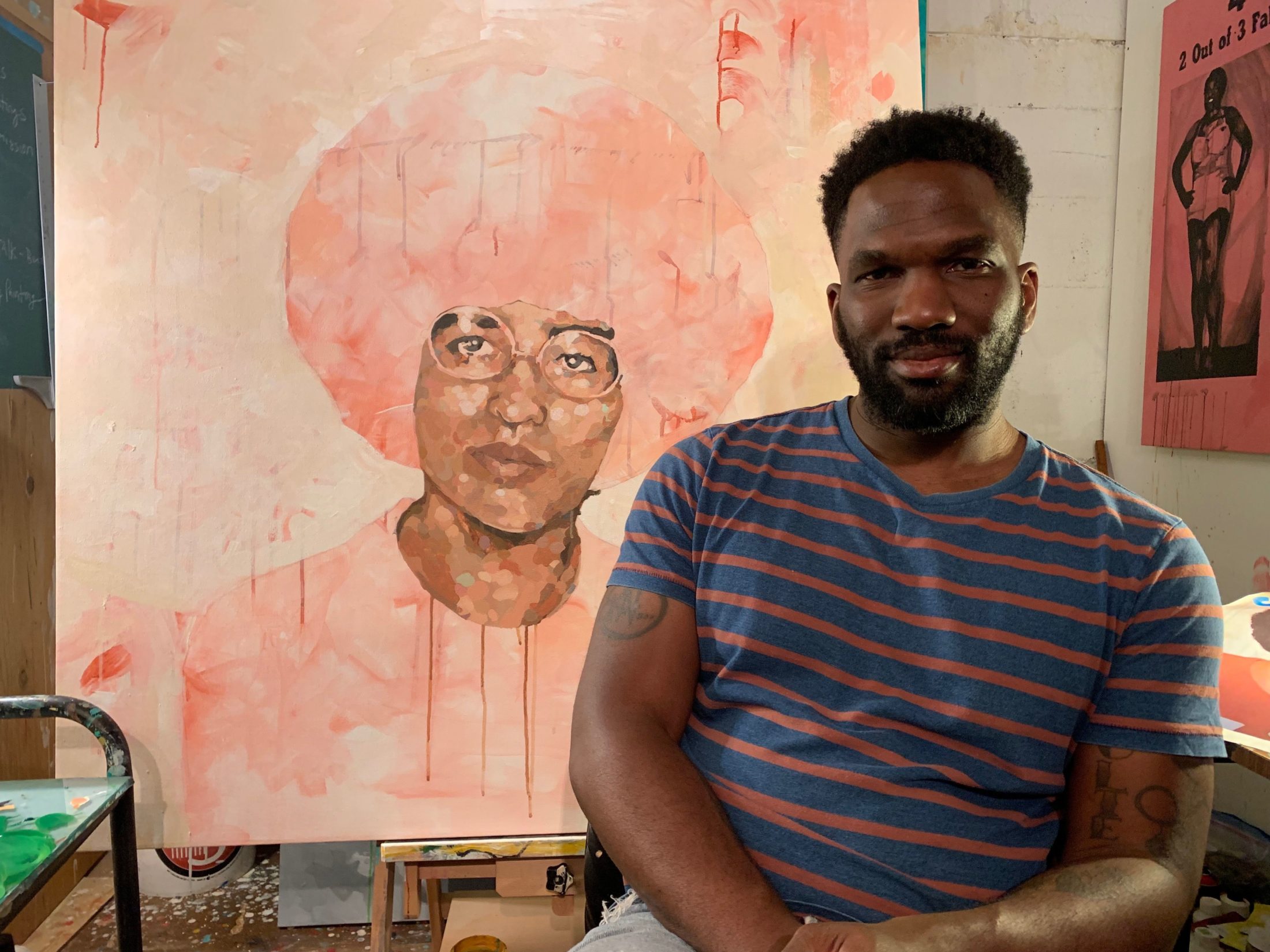 Jeremy Okai Davis in his Portland studio with his portrait of activist Angela Davis from his show “Presence of Color.” Photo by Eric Slade/OPB

His pixelated approach gives him a chance to explore the bold, graphic style of his art school heroes Andy Warhol, Robert Rauschenberg and Jasper Johns. But it’s also his attempt to unify people, Davis said. No matter what the skin tone of his subjects, the pixels show a commonality. “We’re all kind of built with the same material,” he said.

His new body of work did lead to shows and a steady, yearslong gig creating cover art for American Songwriter magazine, with portraits of artists like Tom Petty, Blind Boy Fuller, and Taylor Swift.

Since moving to Portland in 2007, he’s had plenty of group and solo shows around town, including a solo effort at P:ear Gallery titled “An Education.” The show was his response to both the 2016 presidential election, and the shootings of young, unarmed black men. Rather than making overtly political work, Davis for the first time created a show centered on portraits of himself and his family. 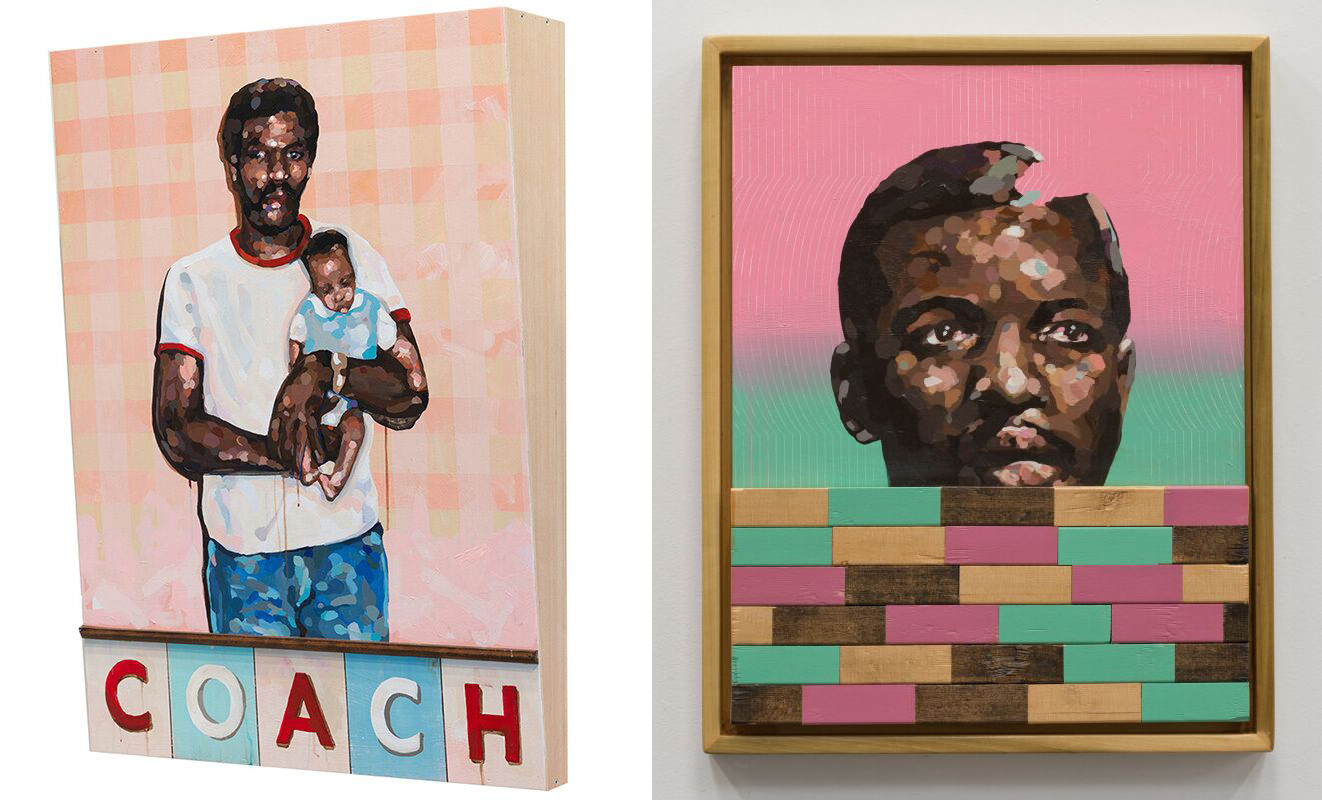 “It was like self-investigation,” Davis said. “It’s a long-form self-portrait without an actual portrait of myself. In that show, there’s pieces of my father holding my big brother. There’s a painting of my mom and my big brother and my sister together. The show ended up being just 10 paintings of different elements that basically fed me as a person.”

Most recently, he completed “The Presence of Color,” through the Stumptown Artist Fellowship program. The show explores the Kodak “Shirley” card, the iconic image that was used to gauge color in early photography and film. But until the 1970s, the “Shirley” card only showed white women.

“So I thought that it would be really interesting to do some research on that idea,” Davis said, “but also end up doing these paintings that I see as basically black Shirley cards.”

His six large paintings, drawn from the pages of Jet and Hue magazines, celebrate the black people who were featured on their covers. 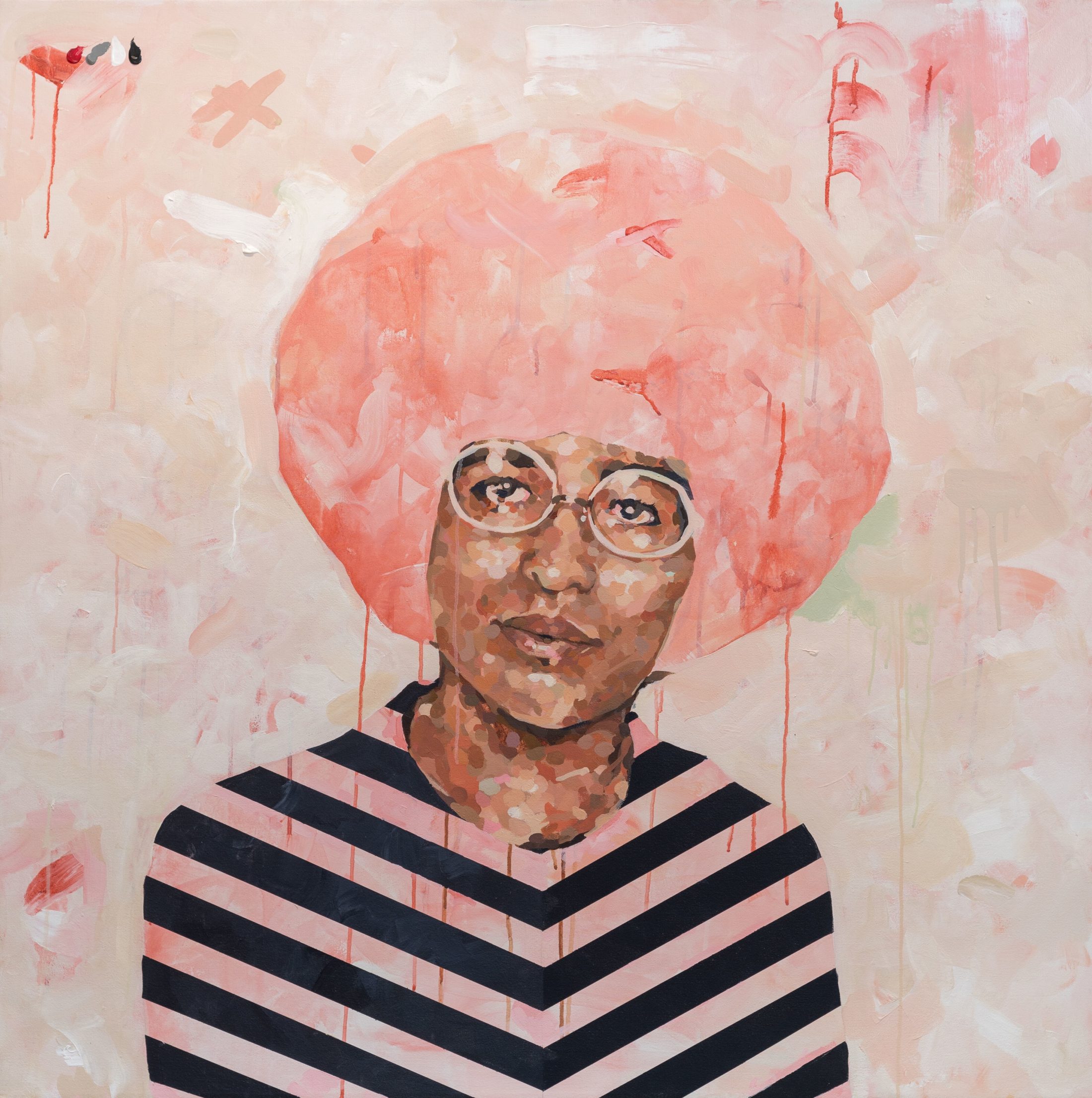 One of those paintings is “Metering,” a portrait of activist Angela Davis, drawn from a 1971 Jet magazine cover. She “sacrificed a lot of her life,” Davis said. “She spent time in jail trying to get her voice out and get her message across. So I wanted to honor her with a piece that spoke directly to her.”

Dots of pink, white, brown, and grey emerge on the activist’s face. When building his portraits, Davis said he likes working with smaller elements and different colors because “the things that make a person are many.”