In most traditional weaving, there are two strands, winding around each other. But this style introduces a third element, the corn husk, that wraps around the outer string to create the decorative pattern. “That little piece of adding in the corn husk kind of throws people off,” Palmer said. “Because by then you need three hands to weave!”

Corn husk baskets have been around for hundreds of years. Traditionally they were used in Native American communities for food storage. The outer layer of corn husk made the baskets nearly airtight, keeping out bugs and keeping grains fresh.

“Nowadays,” Palmer said, “Corn husk is more for show. It’s beautiful, it’s rare. It’s getting out there, being shown.” Palmer’s work has been featured at the Museum of Warm Springs, University of Oregon and the Fuller Craft Museum in Massachusetts.

Palmer, an enrolled member of the Confederated Tribes of Warm Springs, first tried weaving when she was 12 years old at a tribal culture camp. “You had a choice of drum making, basket weaving, beadwork,” Palmer recalled, “And I picked baskets. Made my first basket, went home, showed my mom, ‘Look what I made.’ She’s like, ‘Oh, I make baskets too.’ So that was when I was 12.”

When Palmer turned 20 her mom began to show her weaving techniques and secrets she hadn’t shared before. Palmer said her mom was waiting to see that she was serious about weaving. “So I was really lucky, in the sense that my mom ultimately was my teacher, and my mentor in baskets.” 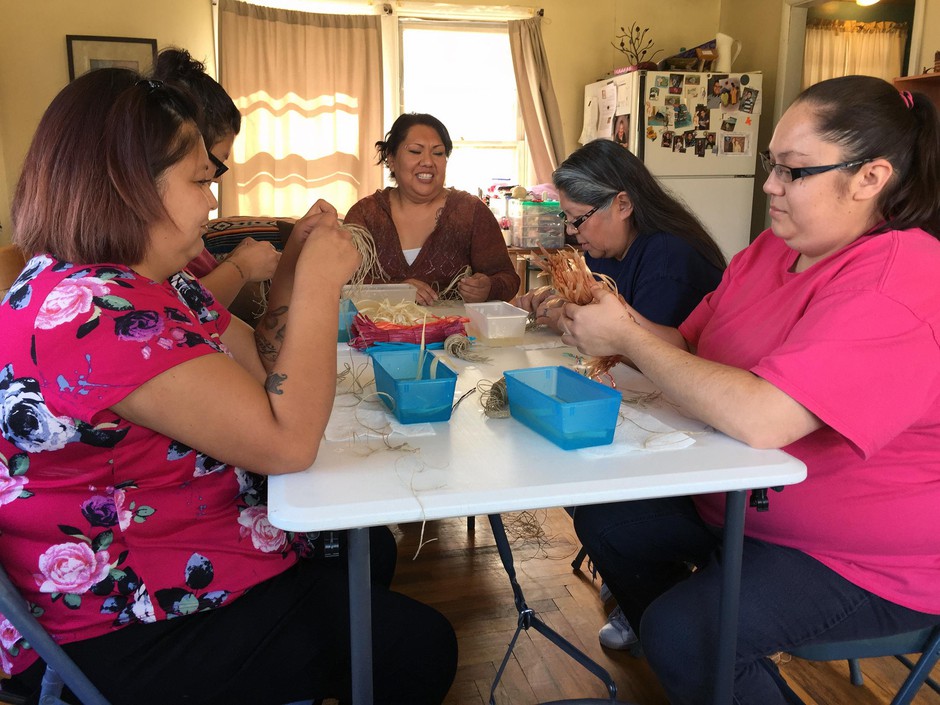 These days Palmer, a health technician, travels and teaches corn husk weaving whenever she can. “Corn husk basket technique is important to me because it is a little bit of our culture. And I want that to keep going within our own people. It’s a beautiful thing when somebody does pick it up and says, ‘I’m from Warm Springs. I make these baskets.’ It’s just nice to hear it’s going somewhere.”

And for Palmer, weaving is a kind of meditation, perhaps even therapy: “It’s someplace where my mind can go where nothing else bothers me. Half the time I forget to drink water or even get up, but it’s a place where I can basically find my Zen. Whenever I feel lost or there’s a conflict in my life, I’ll sit down and weave. It’s a piece of home for me.”