Obsessed with movement, this artist brings wiry sculptures to life

RIVERSIDE, Wash. — Sculptor Loren Doner rustles himself awake to walk 10 feet from the one-room hut he built on his father’s land to the garage that doubles as his studio. Spray-painted murals and torn sketches adorn the walls. Hand tools and welding equipment sit strewn across a large work bench. Doner walks to the back of the room and approaches a tangle of metal resembling a sea creature on stilts.

“All right, buddy, ready for some more tie wire?” he says, as he snips and bends pieces of straight steel cord into curls and circles. 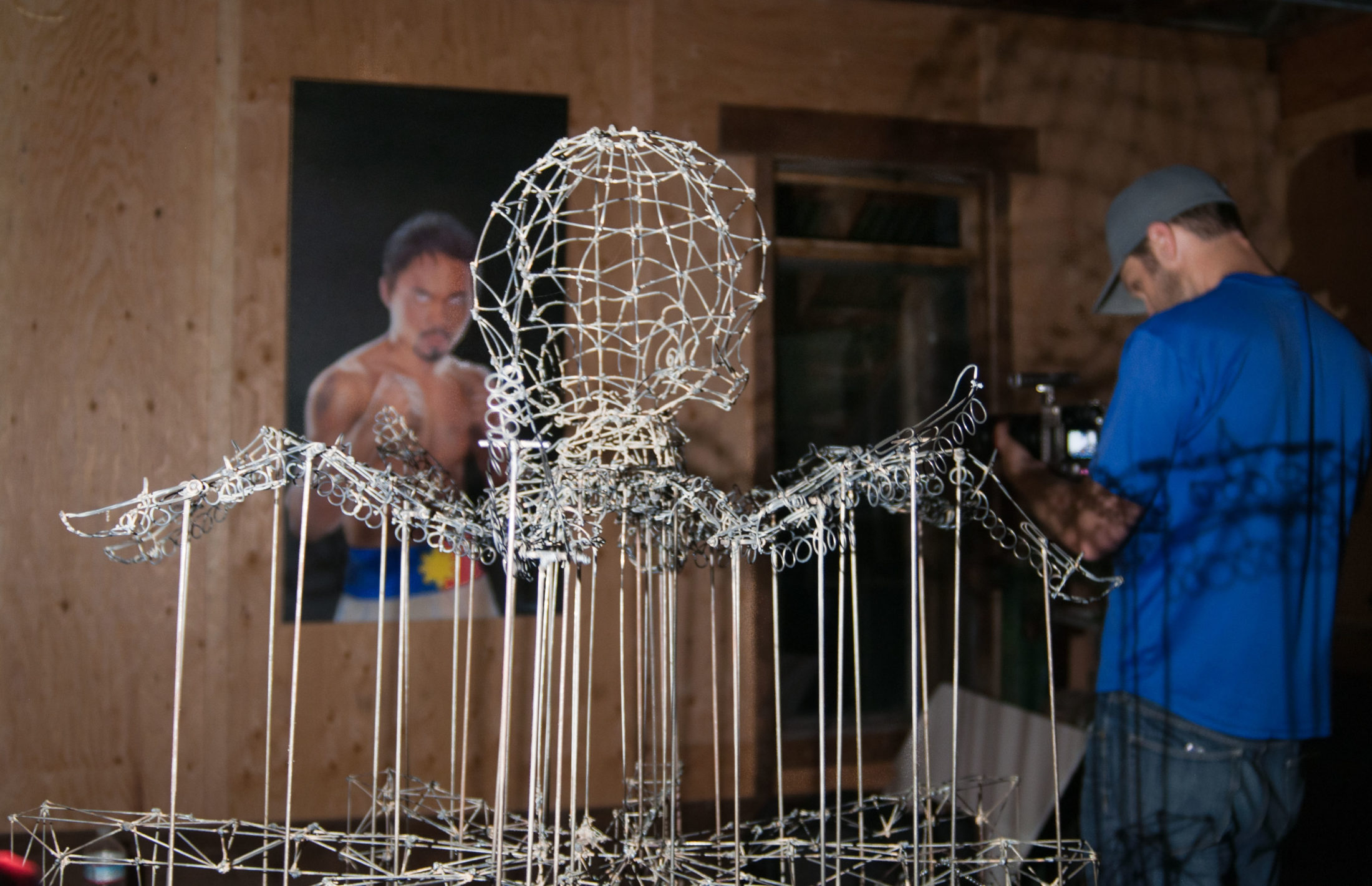 He approaches the sculpture — by now, quite obviously an octopus — and begins welding the cheap wire together. Crude bits of metal transform into suction cups and connective tissue. Doner tugs a section of ball-chain cord, the kind that might hang from a basement light, threaded through the sculpture. The octopus rattles and clicks as its arms lurch up and down. Its head bends and dips as Doner inspects the movement.

“Good,” he says, “only about a thousand more welds to go.” 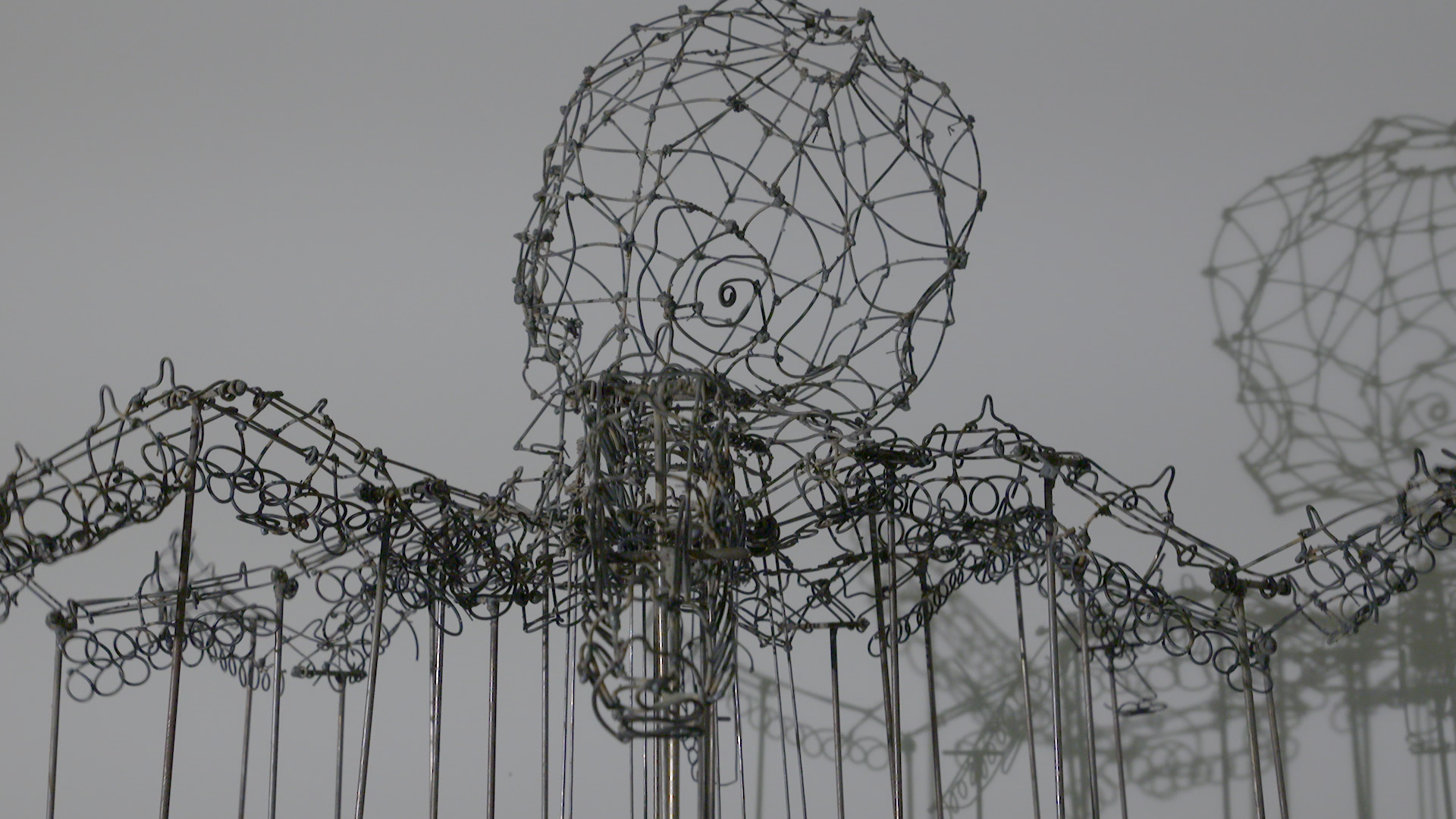 A close-up of “Octopus.” Photo by Marc Pingry/KCTS 9/Crosscut

He smiles and returns to the roll of wire as the sculpture grinds to a halt behind him.

Doner comes from a line of inventor-pioneers who worked scrubby lands along the Okanogan River. His great-great grandfather, Deak, walked with his wife more than 1,000 miles from Indiana to build a small house overlooking the river.

“They somehow carried a cast iron, pedal-operated sewing machine the whole way, and it became a critical piece of equipment that helped them clothe their young family and become friends with the Wenatchi and Okanagan tribes,” Doner says.

Other family members built the first water wheel on the Wenatchee River and constructed equipment used to harvest crops and irrigate fields.

Some of the family eventually moved north to Tonasket, Washington, where Doner was born on the same couch as his brother. They grew up without phones or plumbing, riding horses to school and spending much of the year working outdoors.

“I would spend hours just looking at animals, and the ways things move in this landscape,” he says. “I also became infatuated with how things work. As a kid I would take radios and other gadgets apart, just to see how they worked.” 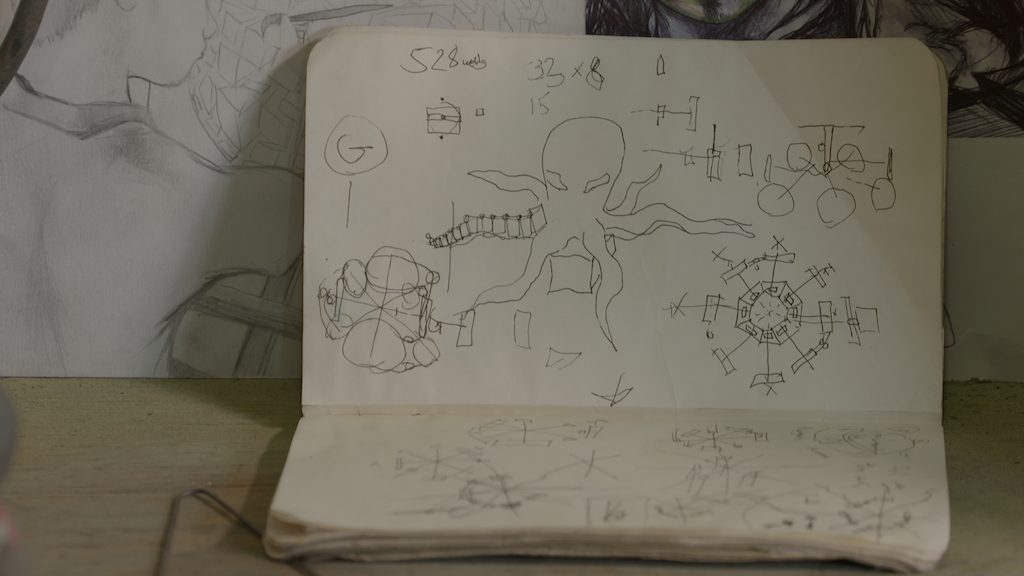 Doner’s artistic talents led a friend’s mother to suggest he apply for a Bill & Melinda Gates Millennium Scholarship. At the last minute, he sent off a portfolio of colored pencil drawings and watercolors. A few months later he was awarded a four-year scholarship. He was accepted to Cornish College of the Arts in Seattle, and soon found himself surrounded by the dynamic urban life of the city’s Capitol Hill neighborhood.

“It was so different to where I had grown up, so loud and chaotic,” he says. “But it was also so exciting and inspiring to be there.”

Wanting his work to stand out but without much money, Doner decided to work with what he had.

“I found an old box of hobby motors in an alleyway and found a bunch of cheap tie wire at the hardware store and I figured I could try to build some cool-looking pieces with that,” he says. 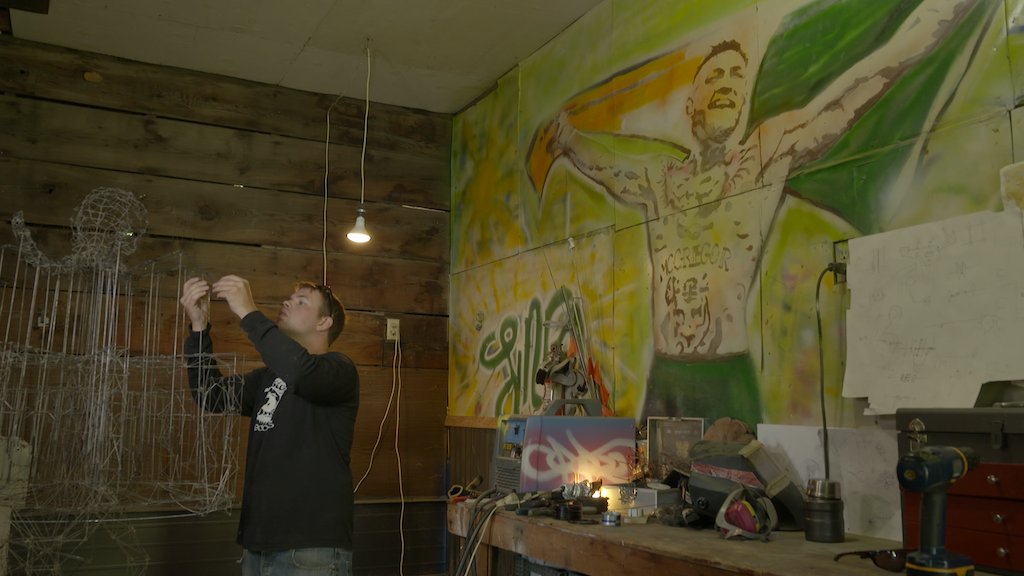 Loren Doner at work in his studio. Photo by Marc Pingry/KCTS 9/Crosscut

After some promising early results, a few crude, toylike sculptures made an impression at Cornish gallery shows and at an exhibition at the Fred Hutchinson Cancer Research Center campus. By the time Doner graduated in 2008 he felt ready to take his kinetic sculpture to a new level.

He and his girlfriend, photographer Mary Parilla, split for the Okanogan to give their art the time it required. They built a hexagonal hut on his father’s land and converted the garage into a studio. Doner leaned into the work, establishing a set of simple rules to guide his sculpting.

“They have to be handmade and hand-welded from raw materials — tie wire, ball chain — and they can only have a single gear motor. That motor spins in one direction only,” he says.

“It’s liberating in a way because it gives me a framework to work within […] but it also means I spend a lot of time at the beginning, thinking and working out how to produce the movement I want and to make it look natural while also being functional. A lot of times they’ll have some tragic flaw that makes them crash to the floor after hundreds of hours of work. But that just gives me more of a challenge.”

Through this trial and error, Doner produces elaborate sculptures inspired by the natural world and the machines of the agricultural heartland.

“Leviathan,” a sculpture of a huge prehistoric sea monster that swam over these prairies when they were seafloor, took more than five years to complete. The octopus has taken almost two years to design and weld. His magnum opus, “Flower,” a 7-foot-tall sunflower that opens and closes under the power of a single motor, required nearly 10 years of engineering, experimentation and intricate handwork. 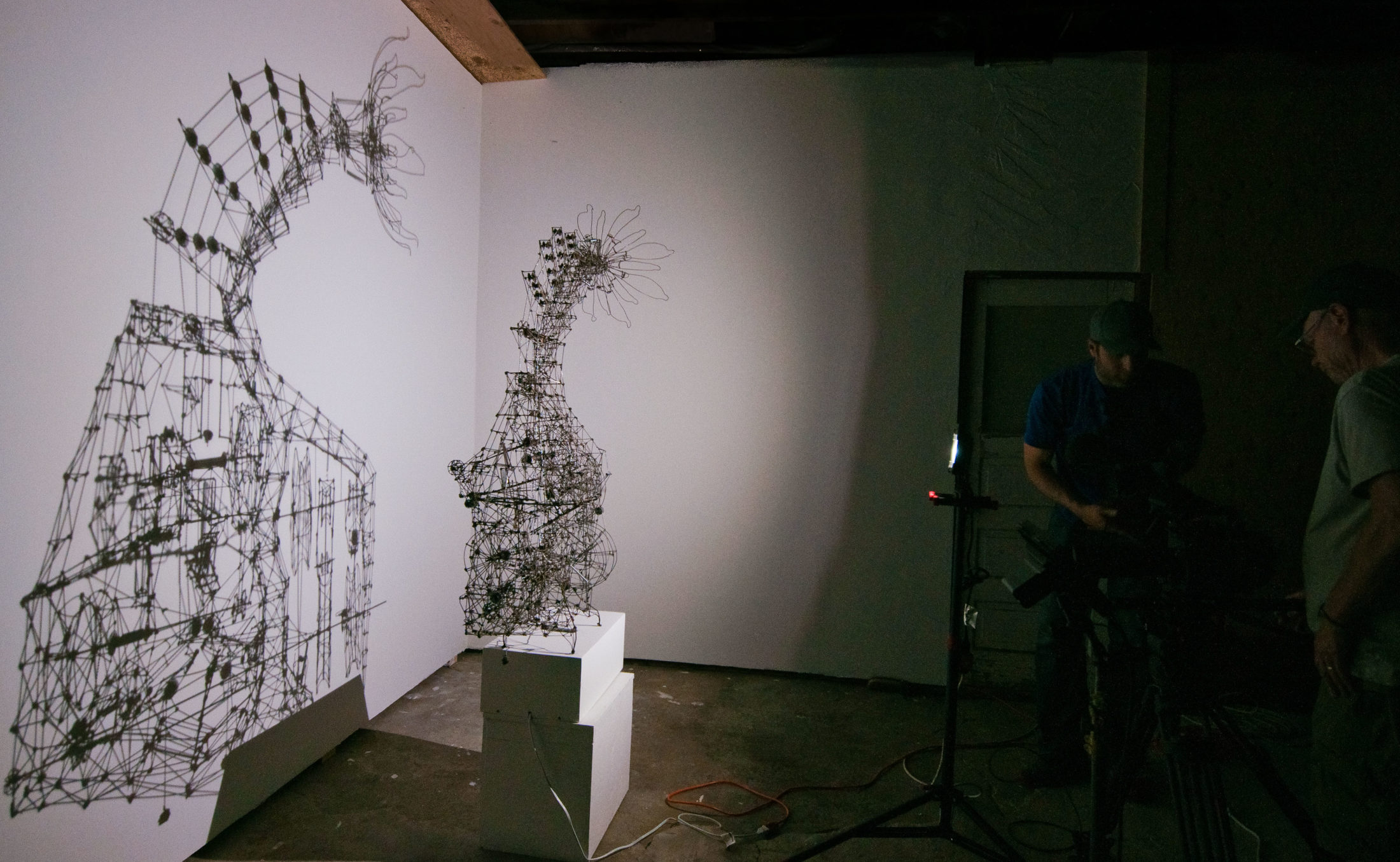 On one side of the studio, he and Parilla built a 9-foot backdrop surrounded by lights. One day, they carefully shuffle each sculpture in front of the screen and set up Parilla’s camera across the room.

The sculptures loom overhead, lifeless like the abandoned combines and hay balers scattered in fallow fields in the surrounding countryside. With the flip of a switch, each sculpture clicks and clatters to life, building to an irresistible metallic din that fills the room with a low symphony.

Doner stands motionless, awed by the thousands of small levers, gears and simple machines woven together to create uncannily realistic movement. As Parilla takes photos and video of each sculpture, Doner walks to the octopus and waves his arms, proudly mimicking the movement he worked so long to recreate.

“When I first turn each one on, it’s so exciting,” Doner says. “I love just hanging out with it, almost like another being.”

When the work is done, he flips the switch again. The work lights blaze and the sculptures creak and clang, winding down to their inanimate state.

“Almost done,” Doner says as he wheels the octopus back to his shop and once again begins bending and welding, eyes aglow with excited energy.