"California In-Store Limo Ride" (left) and "Londontown Limo Ride." Both depict Prince in moments before or after an appearance -- one in the late 1970s, the other in the late 2000s. Artist Troy Gua sought to capture shades of nervous excitement, exhausted resignation and heavy contemplation in both depictions. Photos by Troy Gua
Music KCTS 9 Washington

There are Prince fans who know every lyric of his songs. Fans with Prince tattoos. Fans with a penchant for purple blazers. And then there is Troy Gua.

Since 2011, the Seattle artist has been translating his lifelong love of the music giant into a tiny, artistic homage: a handcrafted Prince doll that Gua sculpts, outfits and photographs in miniature scenarios inspired by the singer’s storied career. 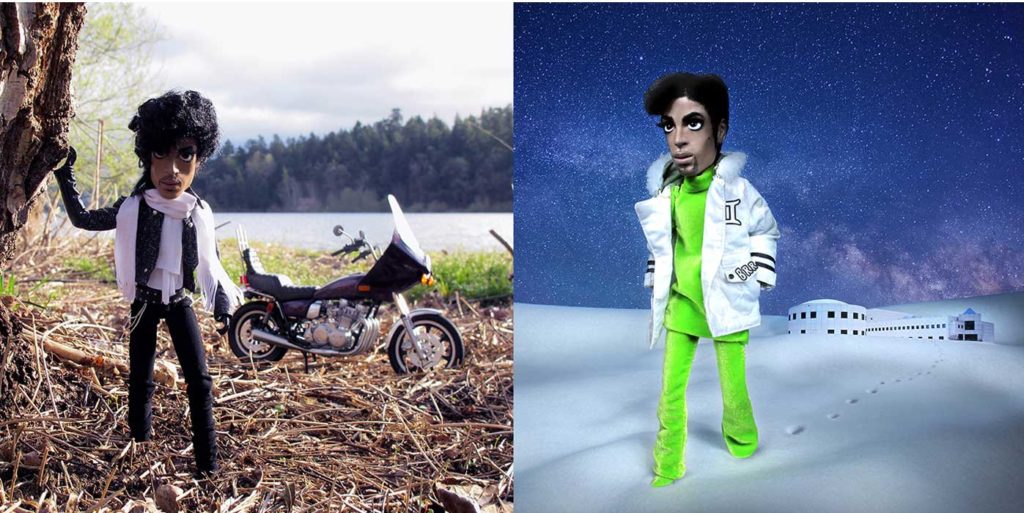 This LPP pairing is an homage to Prince’s (and Gua’s mother’s) home state of Minnesota: “That Ain’t Lake Minnetonka” (left) and “Big White Mansion.” The snow in the latter was created with a blanket of white felt. Photos by Troy Gua

The images featured in the exhibit represent only a small fraction of Gua’s body of work. The 48-year-old artist has created hundreds of “Le Petit Prince” (LPP) portraits, and posts one every week on Instagram with the hashtag #LPPSaturday.

Unlike his idol, who was 5 feet, 2 inches, Gua is tall, made even taller by his upward swoosh of thick, black hair featuring a pronounced white streak. He jokes that while most action figures are one-sixth human scale, LPP is likely one-fifth scale, because the singer was such a compact powerhouse.

There is only one LPP doll, customized to Prince’s proportions, but Gua constantly changes the outfits, the body hair (made of fuzz from black cashmere socks) and the oversized head (made of Sculpey clay).

“Some people might find this morbid,” he said, holding a box of five Prince heads in various states of completion. He meticulously carves the clay, styles doll wigs and facial hair, creates teeth and paints facial features to capture Prince’s expression — sultry, smiling or mid-song. “The most challenging part,” Gua said, “is infusing him with life.”

Gua first discovered Prince at age 13, when he was an awkward high school student in SeaTac, Washington. “I was a geeky art kid, uncomfortable in my own skin,” Gua said. “Then I discovered this guy, flying his freak flag, walking around in ruffles — he was so weird, so different and so confident about it. It was life-changing for me.”

When his older sister took him to a Prince concert at the Tacoma Dome in 1985, it sealed his devotion. The 1988 “LoveSexy” concert at the Seattle Center Coliseum earned a rave review from Gua in his high school newspaper. 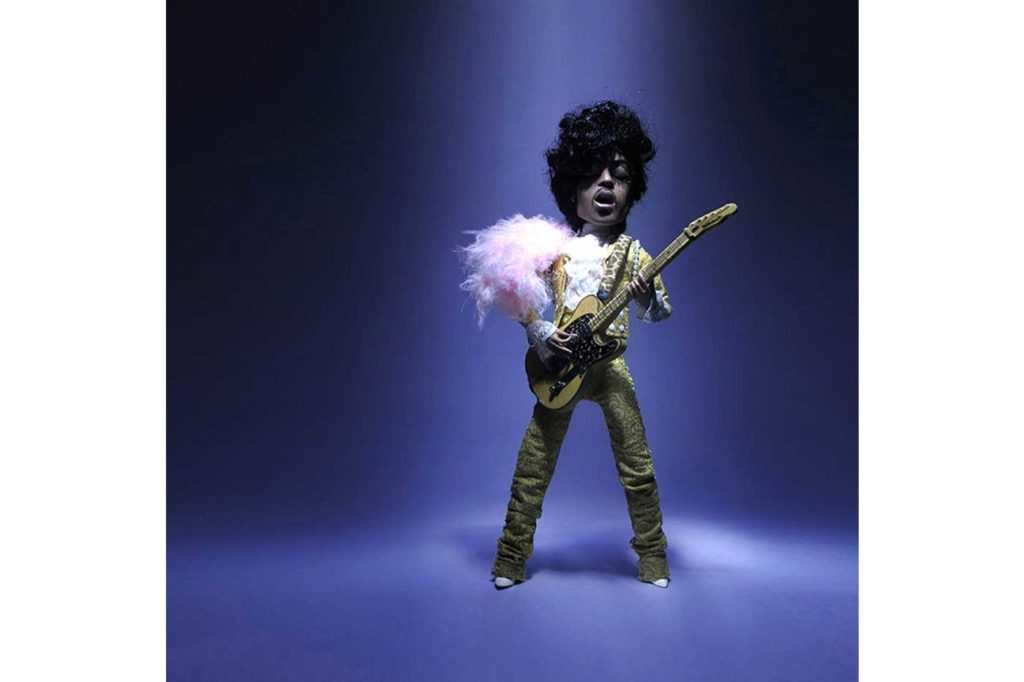 “Punch a Higher Floor.” This is Gua’s effort to capture the essence of the 1985 “Purple Rain” tour, when he first saw the Purple One in concert with his band The Revolution. Photo by Troy Gua 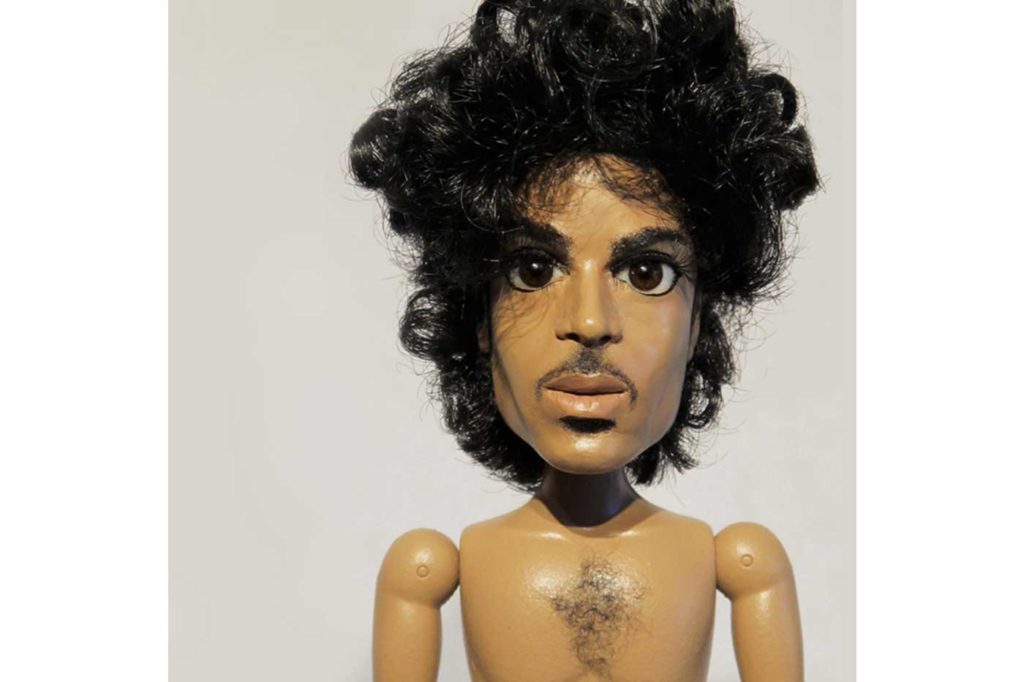 The first-ever photo of the freshly completed Le Petit Prince, in early 2012. Gua had begun the sculpting process in late 2011, and had not yet figured out how to make clothing for his creation. Photo by Troy Gua

Gua’s studio is adorned with Prince paintings and drawings from those teen years — when he was already exaggerating the star’s soulful eyes and elaborate costumes.

But Prince wasn’t Gua’s first prince. He remembers an early obsession with Tutankhamen, which prompted his first-ever handmade art object: a cardboard reproduction of King Tut’s tomb that he buried in his mother’s flower bed. “It disappeared in a matter of days,” he says, “which, as a 7-year-old, I attributed to the curse of the mummy, but was in reality the annoyance of the mommy.”

He was also a huge “Star Wars” fan, and has several collections of vintage action figures looking down over his studio to prove it. “I remember asking my mom to sew outfits for my action figures,” he said. “So maybe that’s where it started.”

The first spark of the LPP project came from the movie “Team America: World Police,” with its “supermarionation” puppets in the style of the 1960s-‘70s British television show, “Thunderbirds.” With a friend, he tried making puppets in their own likenesses, without success. Disappointed, Gua let the idea go.

Then in 2011, he was playing around with a handful of clay, and, “all of a sudden, I had a Prince head.” He created the full Prince figure, and his wife, Catherine, sewed a tiny purple suit. “Initially I was just doing it for myself,” Gua said. He snapped a photo and put it on social media. People started to share it.

“When I was a kid, I felt like Prince belonged to me. But with the internet, I realized there are thousands of us who felt the same way.” He sounded grateful when he said, “A lot of folks tell me it keeps him alive.” 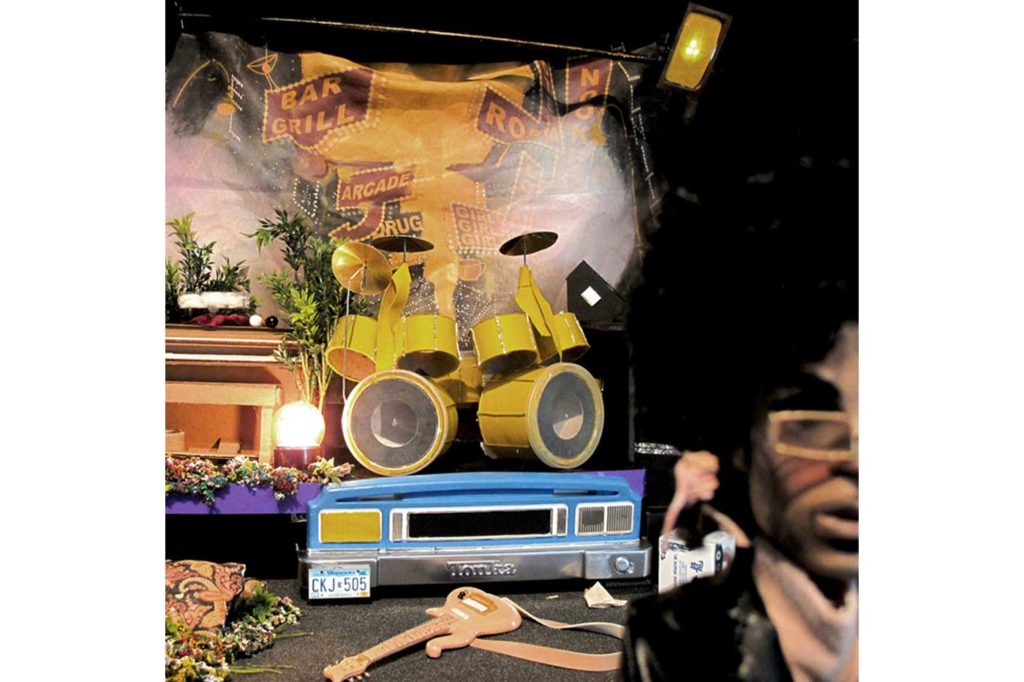 When Questlove of The Roots tweeted an image of one of Gua’s Prince scenes, it went viral.

The widespread share got the attention of Prince’s lawyers, who sent a cease-and-desist letter regarding the sale of LPP merchandise. “I thought — and still think — it’s far enough removed from original artwork [e.g. album covers] that I was free and clear under fair use law,” Gua said.

For a time, he switched to using a doll in his own image (Le Petit Troy), which he dressed as Prince, Michael Jackson, David Bowie and other pop figures.

But the pull of Prince was strong. Gua returned to his LPP project, making sure not to replicate trademarks, and added a disclaimer to his site explaining that LPP is in no way affiliated with or endorsed by the Prince Estate, per their request. 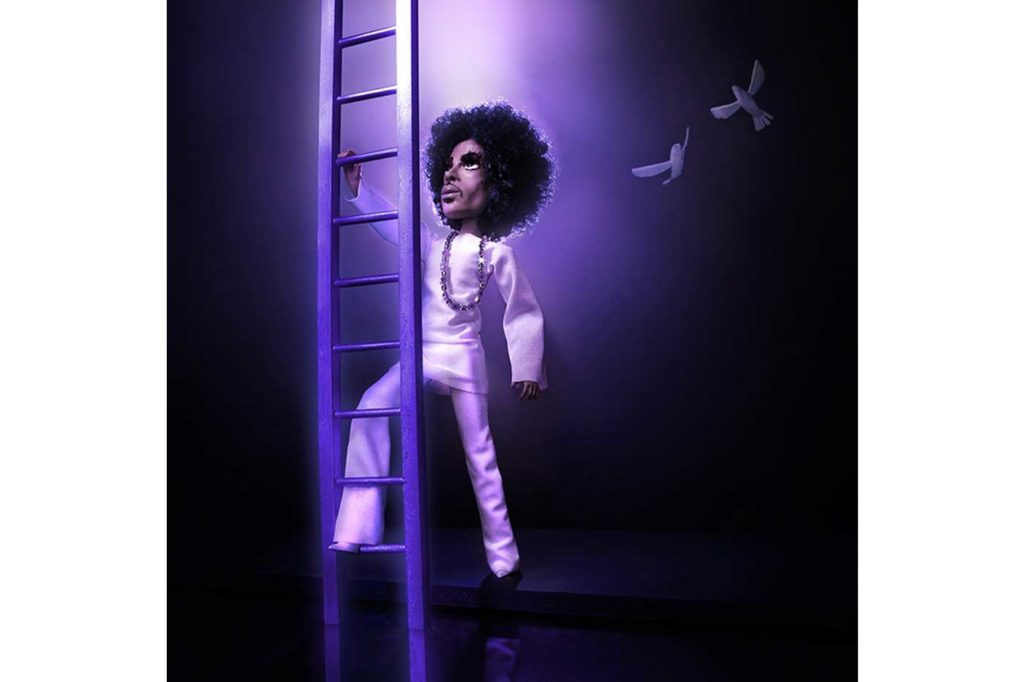 “The Ladder” is the image Gua created upon Prince’s death. He says it ushered in a new phase of the series, which shifted from a celebration of a hero to a memorial — and a way for Gua to share Prince’s story in his own fashion. Photo by Troy Gua

Back in his studio, Gua is at work on a new LPP scenario — inspired by a story publicly recounted by Dez Dickerson, the guitarist in Prince’s one-time band The Revolution. Dickerson said that when they first started out, a manager told Prince to stop wearing spandex pants without underwear on stage. It was too obscene, the manager said. So naturally, the next time Prince played live, he was wearing only underwear, zebra-striped briefs.

For his photo, Gua wants LPP dressed in shiny gold pants and a graphic tee, brandishing the striped underwear in his raised hands and sporting a look of defiance. He’s still trying to get the arms right.

LPP isn’t Gua’s only art series. In a separate project called “Pop Hybrids,” he transposes iconic faces on top of one another in high-gloss resin. (Think Grace Kelly and Grace Jones, George Washington and Mona Lisa, Jeff Bezos and Lex Luthor.) His series “Portals” consists of neon-colored, ’80s-influenced landscapes that pull you in like a tractor beam. “These are about getting from a dark into a light place,” Gua said. “A way to escape.” 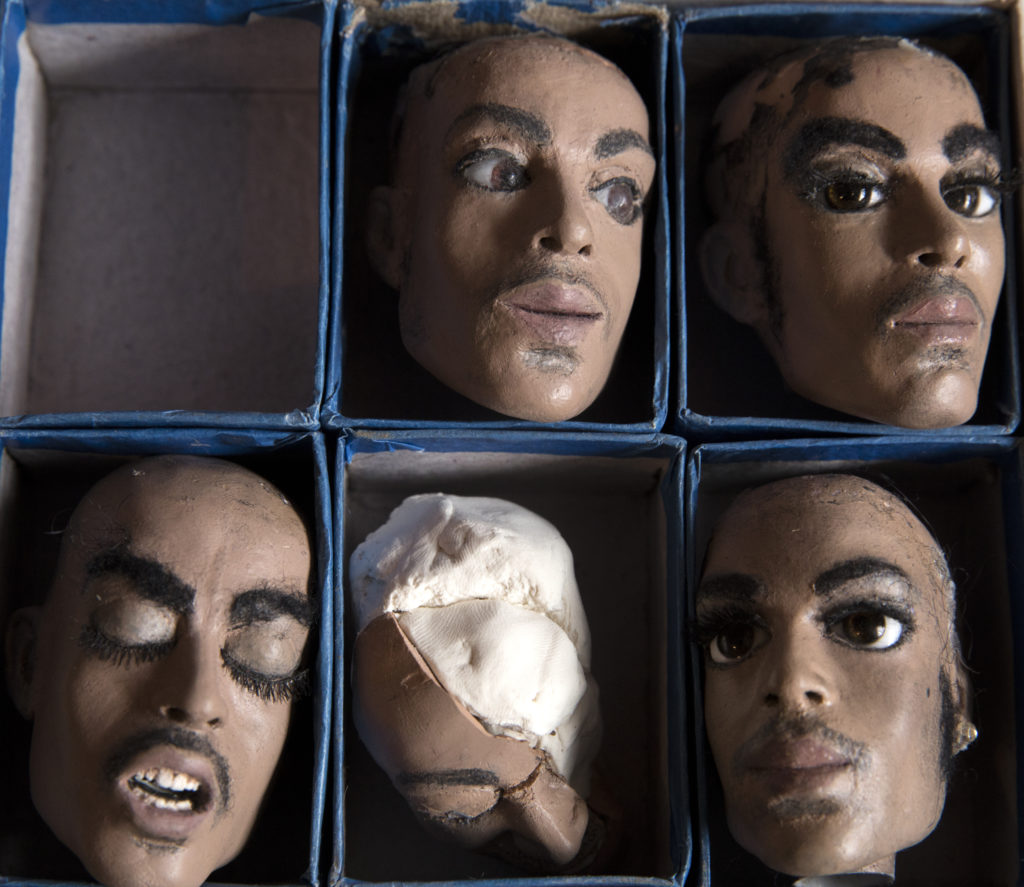 Gua never went to art school, but considers himself “MacGyver-y.” He taught himself to carve Prince’s likeness out of clay, to make miniature guitars from fiberboard and fishing line, to set up stage lighting and use a fog machine, to sew outfit replicas that are perfectly precise, down to the number of buttons.

“I know a lot of people think I’ve lost my mind,” Gua said. He knows people dismiss his work as fan art. “But that’s fine.”

He says part of what he’s always loved about Prince is how the artist didn’t care what people thought. “He moved from genre to genre, exploring a need to express himself,” he said. “That’s been monumentally influential for me.”