Meet the photographer who captures the superhero in all of us

In a building at the southwest edge of Seattle’s Chinatown-International District, American superheroes have been assembling — or at least people dressed up as superheroes. They’re a diverse league of teachers, politicians, immigrants, veterans and students who have come to strike a pose for Seattle photographer Nate Gowdy.

“It’s about being American,” Gowdy said of “The American Superhero,” his ongoing, collaborative, patriotic portrait project for which he is photographing people of all ages, genders, races, creeds and abilities. “It’s about embracing our differences, which always ends up highlighting our commonalities.”

Some picked their red, white, and blue costumes from out of a large cardboard box — tights, shiny gloves and star-spangled plastic shields, while others have brought their own accessories. The setting is Gowdy’s photo studio, inside a former immigration center where newcomers were detained, deported or granted citizenship for over seven decades. Until 1955, the building was also where fortune seekers from the Klondike Gold Rush brought their treasure to have its worth assessed. 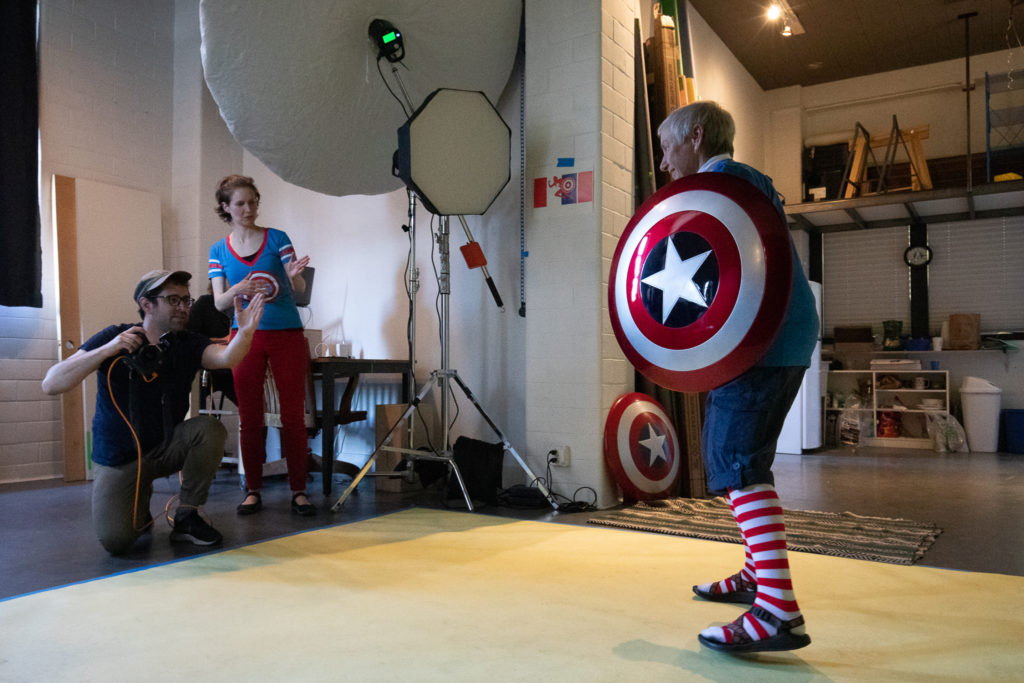 For Gowdy, gold comes in the form of the personal histories he hears from the people he photographs.

“The photos are a hook; they’re bright and shiny,” he said, sitting in his studio, where a Captain America helium balloon was slowly sinking from the ceiling. “But it’s really about the stories beneath.” 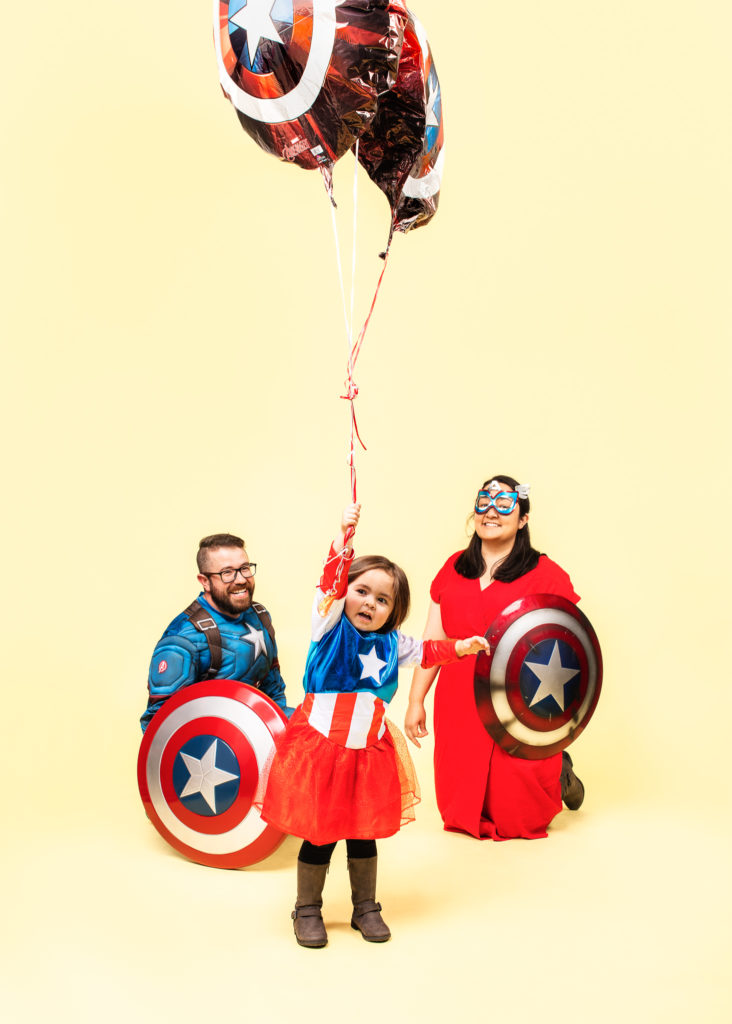 The Vasilez family: Jennifer, 34; Josh, 36; Maya, 3, Tacoma, Wash. “My grandparents bought into and valued the idea that if you just assimilated you could be successful. As a result, I don’t speak Spanish and my native indigenous language fluently. But it’s not just me who’s had to re-indigenize myself, it’s much of Indian country. … Now I’m the principal of a tribal school, where we’re incorporating native knowledge and practices into all subject areas.” Excerpted from Jennifer’s interview with Nate Gowdy. Photos by Nate Gowdy

He has asked the subjects: “What is your superpower?” “What is your vulnerability?” “What does it mean to you to be an American?” There was the survivor of Cambodian genocide, the college student whose Mexican mother was deported in September, the ALS patient helping Microsoft develop eye-triggered technology, the Filipina activist and drag queen who became an American citizen in the very same building as the photo shoot. They each shared their individual American story, revealing a collective narrative with countless chapters, twists and turns. 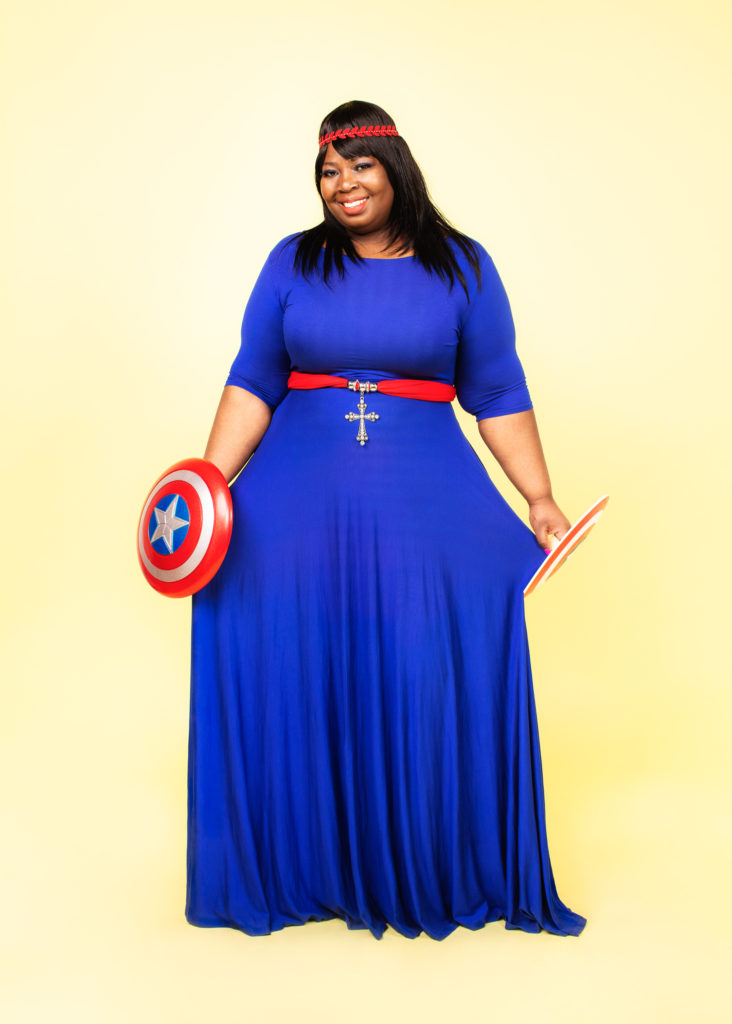 Tammy Davis, 37, entrepreneur, curator, influencer, Everett, Wash. “What I stand for — a world where all body types matter, all sizes matter, all skin colors matter, all races matter. That is my superpower.” Excerpted from Davis’ interview with Nate Gowdy.

Originally from Indiana, Gowdy came to Seattle 10 years ago. A hobbyist photographer, he was given his first “real” camera in 2011, and landed a gig shooting photos for Seattle Gay News. On his first assignment he took a traditional photojournalistic approach, attempting to be a fly on the wall. But when he brought the photos back to his editor, he said, “We agreed they were really bad.” Then his editor gave him the best advice he says he’s ever received: “Engage people.” On his next shoot (a rave for the “bear” community), instead of trying to be invisible he started asking, “Can I get your picture?” The subjects obliged gleefully and the photos captured the energy of that specific night. “It’s so much better when you let people take control,” Gowdy said. “That’s when they let me in.”

He became the official Seattle Pride photographer in 2011 (and still is), and shot many political fundraisers and events during the campaign to legalize gay marriage. Driven by his interest in politics, Gowdy decided to follow the 2016 presidential campaign trail. He traveled to Iowa and New Hampshire, shooting photos and sleeping in his car. He landed a shot of Bernie Sanders on the cover of Time magazine. He also attended the Republican National Convention in Cleveland, where he first encountered the inspiration for “The American Superhero” project: Vishavjit Singh. 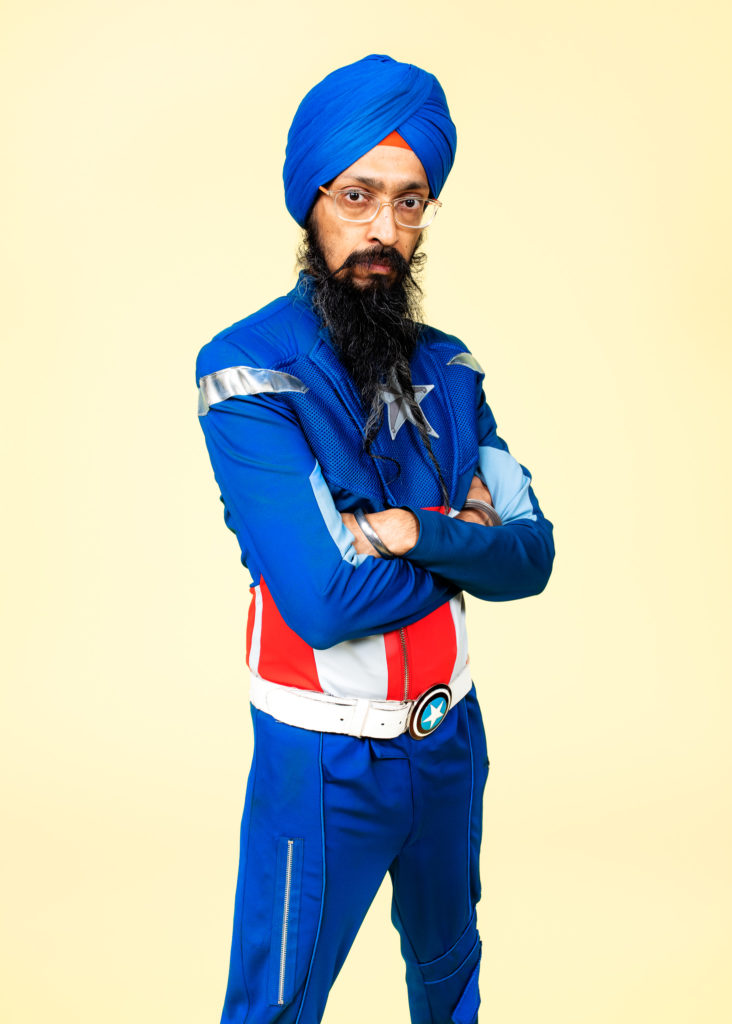 Vishavjit Singh, 48, cartoonist, speaker and performance artist, New York City. “America to me is a collage of incredibly diverse stories with twists and plots spanning the globe. There is darkness, there is light, there is tragedy, there is redemption, there is intransigence, there is innovation, there is hate, and there is love. To me, our greatest strength and vulnerability is this amazing collection of tales. To create a space for each one of our stories to be told and heard is our greatest pursuit.” Excerpted from Singh’s interview with Nate Gowdy.

“Captain America with a beard and a turban,” Gowdy said of his first impression. “I hadn’t seen that before — it made an impact.” Singh, who was born in Washington, D.C., and later survived the 1984 Sikh massacre in Delhi, India, adopted the character and costume of Sikh Captain America in 2013, after a white supremacist massacred six Sikhs in a Wisconsin house of worship. His aim was to encourage tolerance and confront stereotypes in a playful way that couldn’t be achieved in street clothes. Gowdy thought Singh’s concept was brilliant in its simplicity. The two met briefly but amid the chaos of the GOP convention, Gowdy didn’t think much more about it.

That is until back in Seattle, in the spring of 2018, Gowdy learned Singh would be in town to launch the Wing Luke Museum exhibit of his illustrations, “Wham! Bam! Pow! Cartoons, Turbans and Confronting Hate.” He asked Singh to come by his studio so he could take his photo, in costume, against a yellow backdrop. That was going to be that — the portrait of the bearded, turbaned Sikh Captain America would live among Gowdy’s other political shots, including Barack Obama, Donald Trump, Hillary Clinton, Joe Biden, Ted Cruz, Elizabeth Warren, Mike Pence and Bernie Sanders, as well as their supporters and protesters. 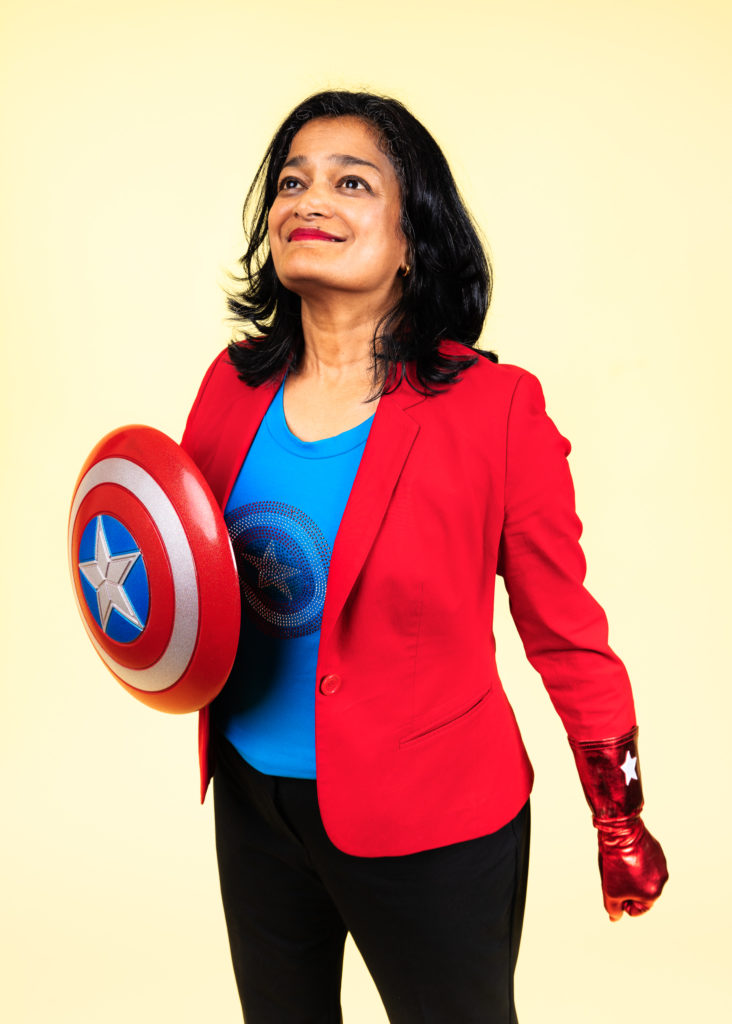 Democratic Rep. Pramila Jayapal of Seattle, 53. “Defining moments for me have been coming to the United States when I was 16 years old, by myself, as an immigrant, with really nobody around me, and really feeling what that meant — to be in a whole new country with no family. … And now, getting to be an immigrant in Congress, one of only 14 of 535 members of Congress who is actually an immigrant — the first Indian-American woman.” Excerpted from Jayapal’s interview with Nate Gowdy.

But then something happened that Gowdy said was “literally life changing.” In October, he attended a talk Singh was giving at Town Hall Seattle. During the Q&A, the woman just ahead of Gowdy in line said to Singh, “You mentioned that anyone can be Captain America. Have you ever thought about having a photo shoot where people from all walks of life are dressed up like Captain America?” Singh and Gowdy thought it was a really good idea, and started talking excitedly with the woman — Christie Skoorsmith, a local mother of twin transgender boys — about how to accomplish it. The three planted the seed for the project that night.

In March, 40 people responded to a call on social media, showing up at Gowdy’s studio in various states of superhero gear to be photographed for the project. During the shoot, Gowdy and his team of volunteers also captured the individual stories beneath the costumes, which he and Singh have been editing down for “The American Superhero” website. 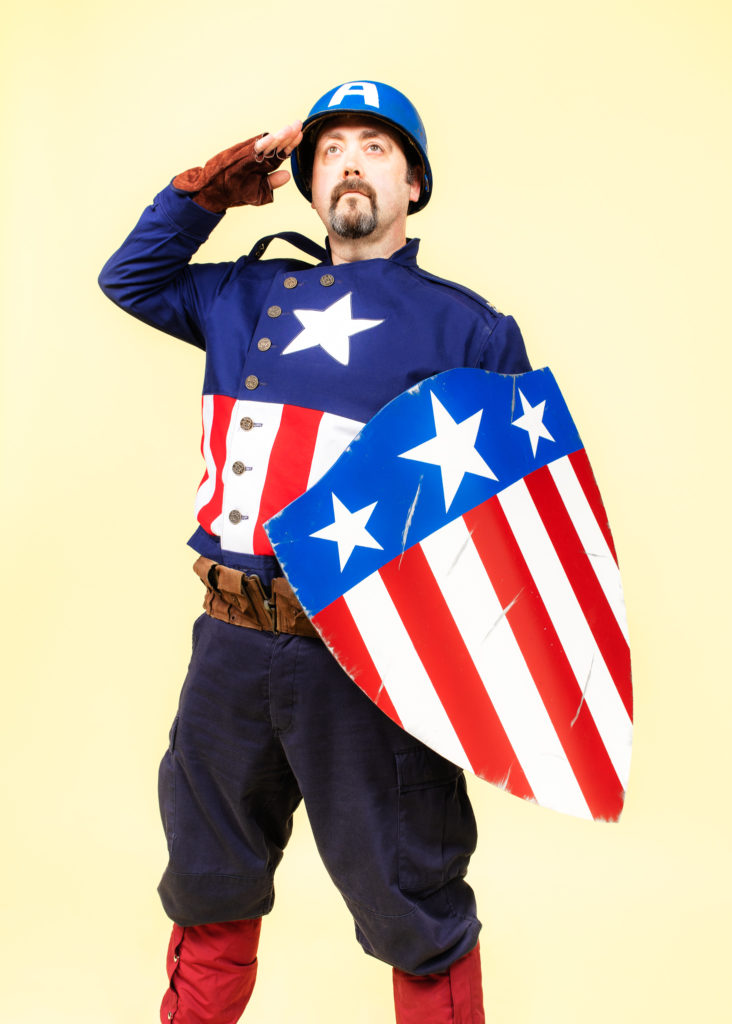 Mike Martin, 52, concept artist for pop culture collectibles, Seattle. “I served four years in the Idaho Guard, then four years in Washington. I learned discipline and self-confidence, and it was the best thing I did for myself as a teenager. … Respected by all and universally recognizable, Captain America is more than just a flag and a symbol — he’s a friendly, approachable character. Little kids always come up to me for photos, so I know that I’m portraying something that’s really, really good.” Excerpted from Martin’s interview with Nate Gowdy.

The first shoot went so well Gowdy coordinated a second one, and continues to do more targeted sessions. He had no trouble convincing Democratic Rep. Pramila Jayapal, who represents Seattle, to dress for the occasion, and earlier this month he photographed Annise Parker, the former mayor of Houston, who wore a pearl necklace and earrings along with her shiny red gloves. Gowdy currently has his sights on fellow Hoosier and South Bend Mayor Pete Buttigieg.

“My dream is getting ‘the Squad,’” he said, referring to Democratic Reps. Alexandria Ocasio-Cortez of New York, Ilhan Omar of Minnesota, Ayanna Pressley of Massachusetts and Rashida Tlaib of Michigan. “That would be incredible.” But just as he gets excited, he emphasizes the intentional democracy of the project. “For every public figure, we want to include 10 to 20 people whose names you don’t know.” He’s also determined to include people on the other side of the political spectrum. Asked if any of his superhero subjects are Republicans, he says he doesn’t ask that question but thinks there are likely a few. 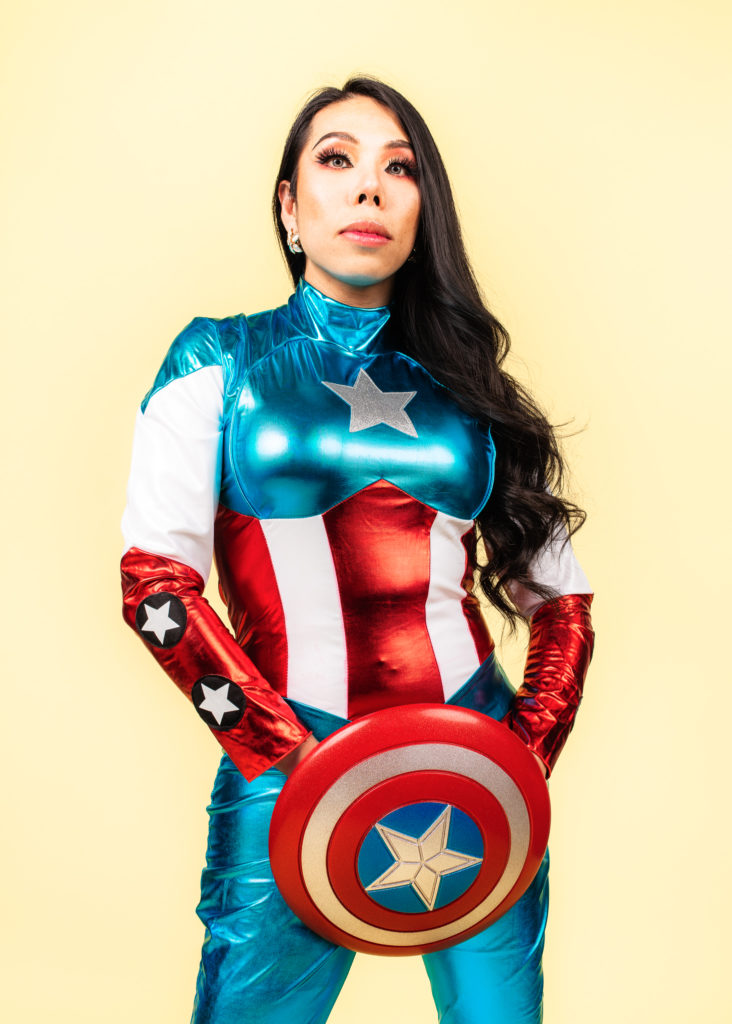 Tanya Rachinee, 37, Thai cuisine chef, fashion designer, gamer, Seattle. “Moving from Thailand when I was 19 totally changed my perspective. I had to adopt a new country and to everything that I’d never seen before. I did kind of know what America was about from the movies, but life and movies are different. It’s pretty tough, but eventually you adapt, you learn.” Excerpted from Rachinee’s interview with Nate Gowdy

Gowdy has published about 20 photos so far, with several dozen more in the pipeline. He debuted 35 of the portraits at the University of Washington’s Tower Mezzanine Lounge in an exhibit that opened last month. And he’s not stopping there. Gowdy hopes to take the show on the road to eight cities across the country, including in more conservative areas, during the 2020 election. Though Gowdy said his premise is nothing new, he believes in it fiercely: “We can achieve change by listening to each other.”