TACOMA, Wash. — In the outbuilding behind her 1907 home, RYAN! Feddersen is making coyote bones. The artist’s worktable is covered in what looks like the remains of a strange and vibrant feast: two slow cookers spackled with a rainbow of burbled colors next to a sheet pan scattered with sticks of green, purple and indigo. Also visible: a soup ladle, funnel and paring knife, all coated in wax.

Feddersen gently opens a rubbery blue mold to reveal voids in the shape of metatarsal bones. This is how she forms “Coyote Bones,” which are the crayons used in her interactive art installation series called “Coyote Now.” With wall-sized scrolls of coloring-book panels, Feddersen shares her modern take on traditional Native American Coyote stories. (Coyote is addicted to technology; Coyote gets caught up in Russian propaganda online.) In the lore of the Interior Salish peoples, she explains, “When Coyote is killed at the end of the story, all it takes is a scrap of bone or fur to bring him back to life.” 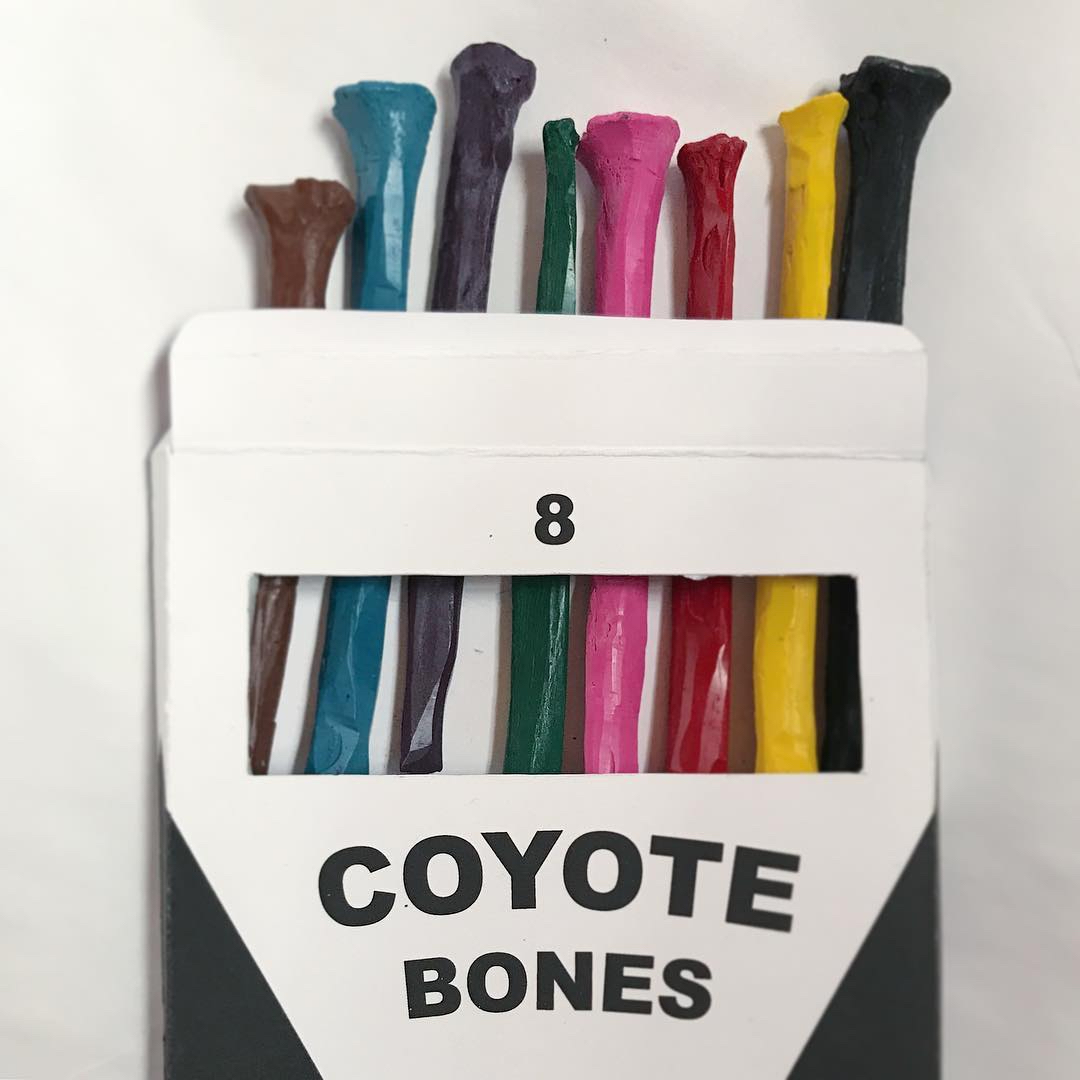 A sample box of Feddersen’s “Coyote Bones” crayons, which viewers use to color in her Coyote Now wall installations. Photo courtesy of RYAN! Feddersen

An enrolled member of the Confederated Tribes of the Colville Reservation (her heritage includes Okanogan and Arrow Lakes), Feddersen sees a connection between Coyote’s immortality trick and contemporary Native American identity. “As long as we continue to wield our creativity,” she says, “our culture will stay alive.”

And while she’s been putting that belief into action with a huge output of work, Feddersen, who is 35, didn’t always want to be an artist. Growing up off-reservation in Wenatchee, Washington, she was surrounded by an art-making family, including her uncle Joe Feddersen, an acclaimed printmaker, weaver and sculptor.

But as a kid, she says, “I wanted to be a Supreme Court justice.”

That alternate judicial life is easy to imagine, given her measured vibe and studied point of view. She would make a cool justice, too — a streak of teal in her dark brown hair, a coyote pendant around her neck, her first name spelled all in capital letters with an exclamation point. (Feddersen uses RYAN! professionally because she is tired of being asked about why she has a “boy’s name” and also, she thinks the punctuation is more feminine.) 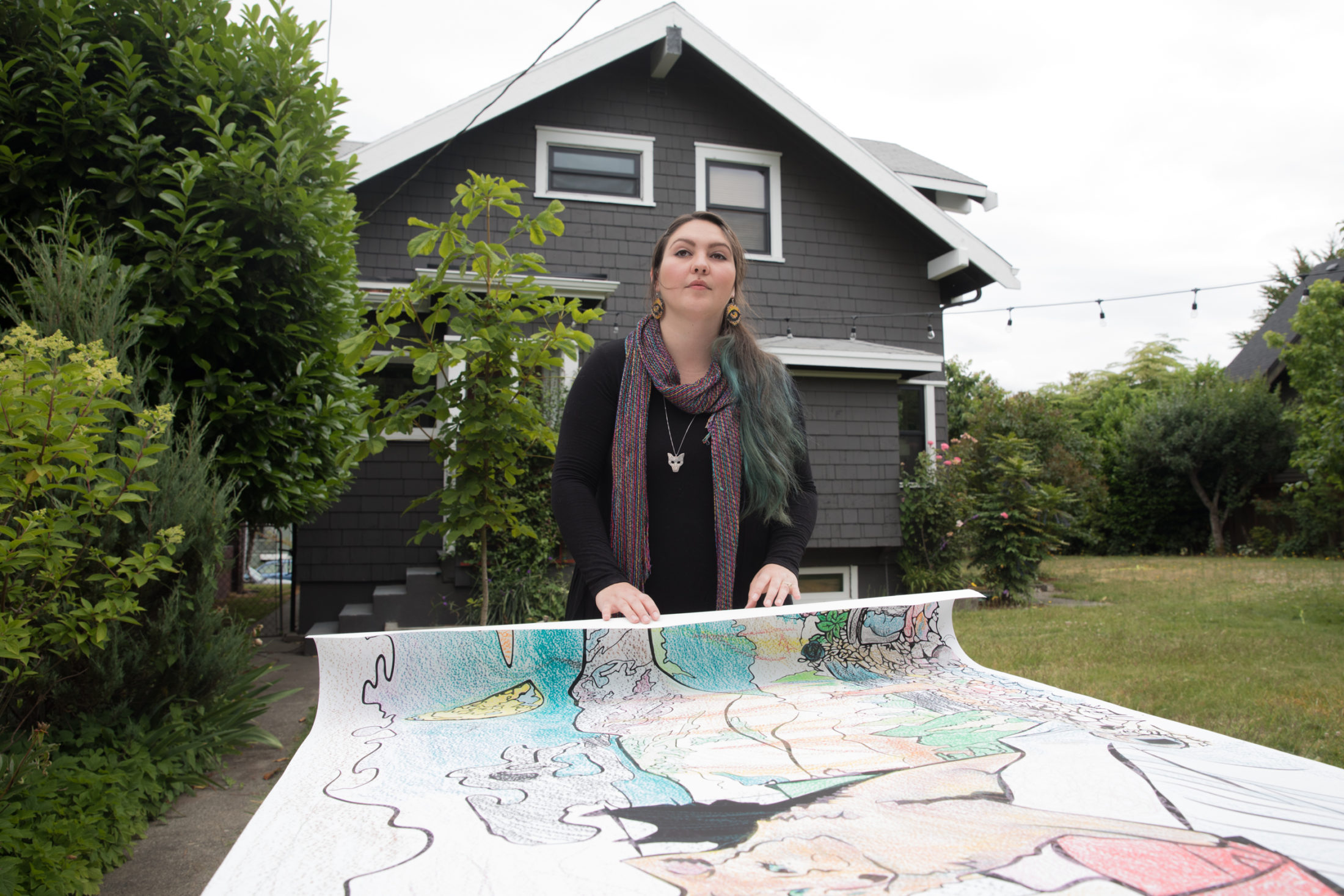 RYAN! Feddersen displays one of her “Coyote Now” panels (which viewers are asked to color in) outside her backyard studio in Tacoma, Washington. Photo by Matt M. McKnight/Crosscut

Instead, she attended the Institute of American Indian Arts in Santa Fe, New Mexico, and earned a BFA from Cornish College of the Arts in 2009. After graduating, Feddersen tried to juggle arts administration work with art making. But a few years ago, she realized she wasn’t able to do both, so she decided to quit her job at 4Culture and fully commit to her art. “I wanted to take advantage of the opportunities I was being offered,” Feddersen says. “And then see how it goes.”

One of her recent projects is “Synecdoche,” a three-story, indoor mural unveiled last month at the Burke Museum of Natural History and Culture in Seattle. In the artwork, columns of black hieroglyphics on a white wall serve as a “language” Feddersen created, based partly on artifacts from the museum’s collection. Over the course of one row of symbols, a fish hook morphs into a gas pump; a piece of Native pottery becomes a biohazard symbol; an animal skull turns into a cartoon moneybag. As familiar images — plastic six-pack rings, buses, wifi symbols — devolve and evolve, the wall becomes a scroll through human history. 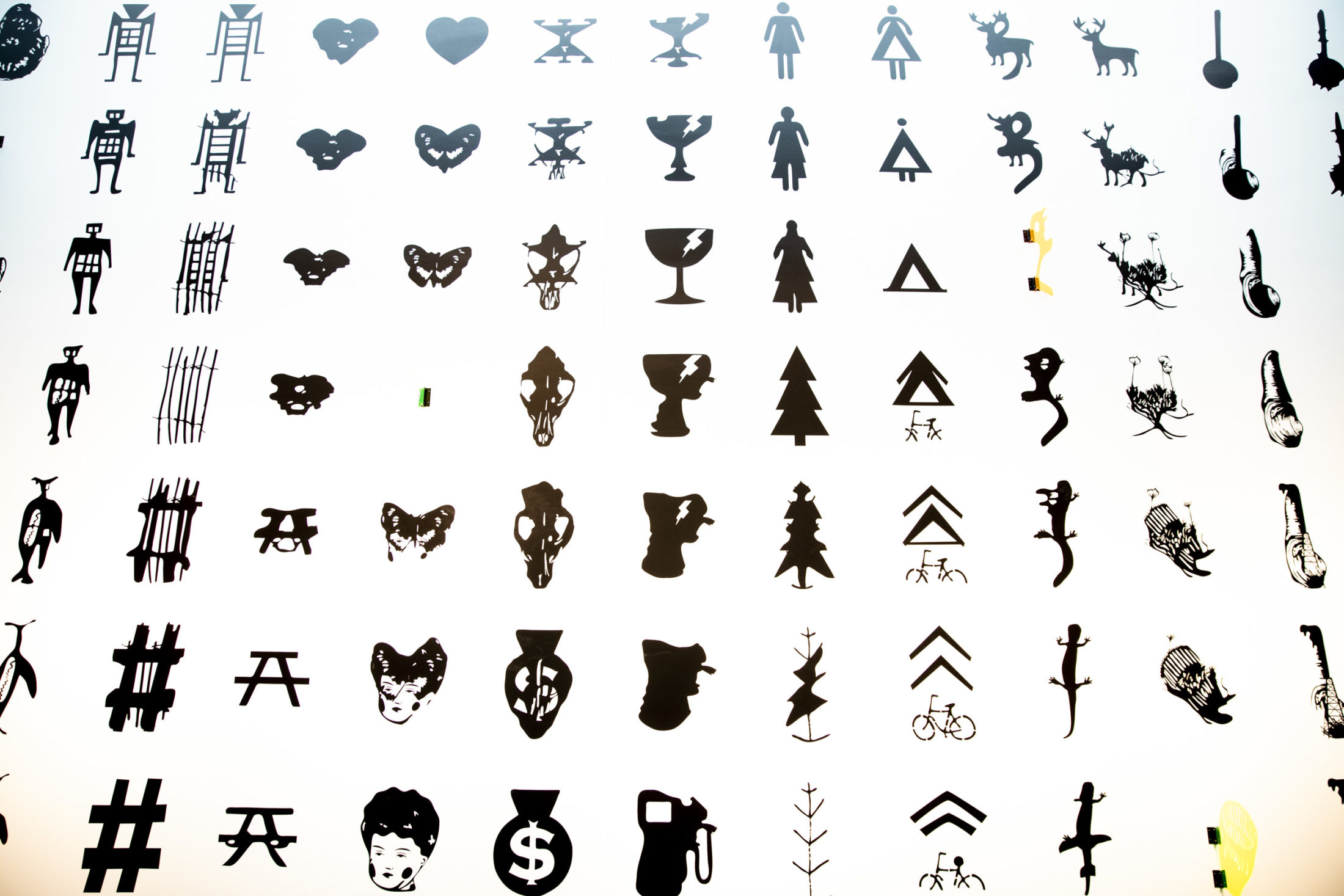 The mural titled “Synecdoche” by artist RYAN! Feddersen at the Burke Museum of Natural History and Culture during a media preview in September. Photo by Dorothy Edwards/Crosscut

Many of her pieces employ pop culture references, she says, “because Native culture is continuously informed by the contemporary American culture we are living in.”

It’s a point emphasized by The Post Human Archive, a 2018 immersive installation Feddersen created for Seattle Art Museum in response to the exhibit “Double Exposure: Edward S. Curtis, Marianne Nicolson, Tracy Rector, Will Wilson.” Curtis was a white photographer based in Seattle at the turn of the 20th century, who staged portraits of Native people from more than 80 tribes. “There is such a romantic legacy of his work,” she says. “People think it’s historical, but it neglects history.”

Feddersen says that Native people are still thwarted by Curtis’s legacy, and points out that the photographer’s vast documentation of Native Americans was funded by J.P. Morgan, “who had a vested interest in destroying the Native way of life” in the name of Manifest Destiny. “Curtis had to portray Natives as incapable of existing in the modern world, so they could be moved somewhere else,” she says.

In her SAM piece, visitors took a photo of themselves in front of a background (either an office cube or viewpoint on the Puget Sound). Feddersen then “documented” them in an online archive, in the guise of the “A.I. Center for Ethnography.” Like Curtis, she didn’t use names in the photos, just “types” (“A Picnic Goer,” “CEO’s Daughter”). “I am trying to give people the experience of having an outside force define and document you,” she said at the time.

Giving people lasting experiences is key to much of Feddersen’s work. “I don’t generally make things that are salable,” she says. “I think about action and how action can amplify metaphor.” In previous work, she’s used thermochromatic ink, which becomes transparent when touched by a warm hand, to reveal truths hiding behind misconceptions about Native history. A map of the U.S. uncovers the vast number of boarding schools where Native children were forced to unlearn their traditions and language. Famous paintings of Native meetings with Lewis and Clark are revealed as inaccurate in both intent and environmental detail.

“In Native communities, art isn’t supposed to be put on a pedestal or in a vitrine. It’s for community use,” Feddersen says. “That’s why my work can be touched. My art exists as people are interacting with it.” 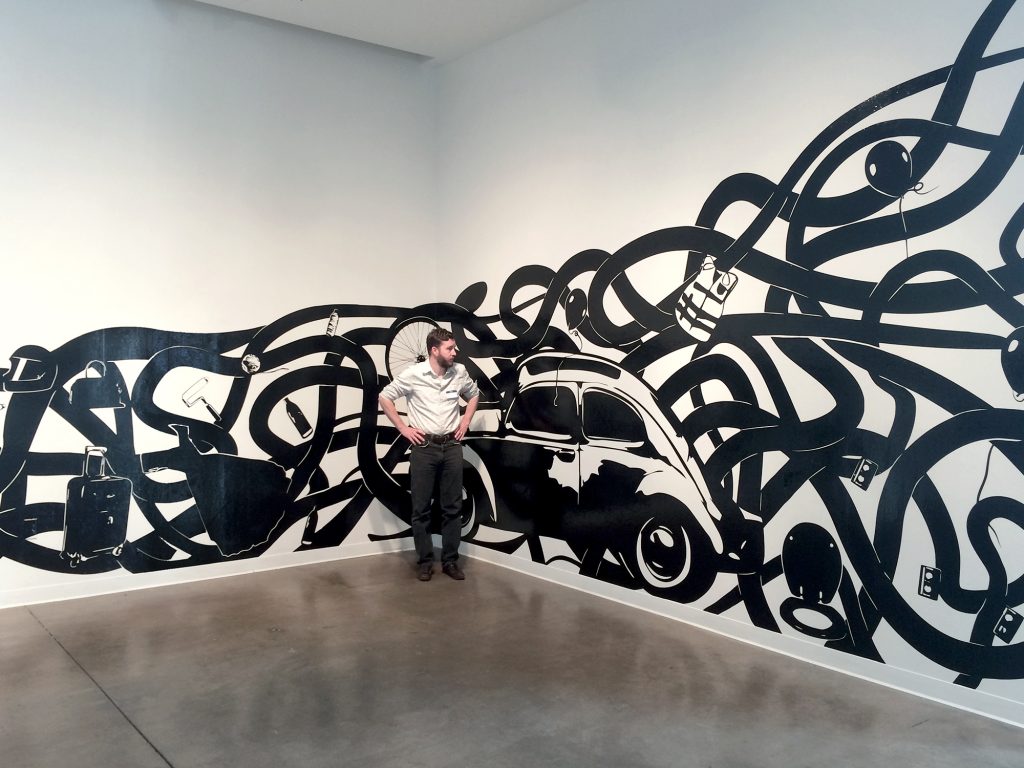 “Nexus,” her permanent installation for Tacoma’s Prairie Line Trail (along the tracks of a retired railroad line) allows visitors to play at trading items — antler tools, obsidian, shells — that were exchanged between tribes across North America long before white settlers arrived and “established” trade via railway. In “Black Snake Rising,” an evolving wall-piece originally created for a Standing Rock benefit, sinister ropes of snaky oil are entangled with human detritus, from plastic bottles to a VW Bug. Visitors are invited to stick decals on the wall, contributing more pollution to the mess, and reenacting the environmental damage we do in real life.

While her subject matter is weighty, she creates deliberately playful entry points (coloring, stickering, snapshots) to draw people in. “I want to be a provocateur,” Feddersen says, “but I want the audience to come with me by choice, not because they were pushed.” Using the age-old tools of folklore — warnings coated in wisdom and wit — she’s shaping a new genre: the lore of the here and now.