ANCHORAGE, Alaska — Skin stitching is a more intimate form of tattooing than the modern tattoo gun. It is a slower process and allows for more time for reconnection, reflection, and healing. To Sarah Whalen-Lunn, this process has been life-changing.

“It just has boiled me down to the absolute most true core of myself that I have ever been,” Whalen-Lunn told “Indie Alaska.”

She and Holly Nordlum are accomplished artists and part of a group of women reviving traditional Inuit tattoos and tattooing methods. Nordlum was born in Kotzebue, an Alaskan village, and is currently based in Anchorage where she works with Whalen-Lunn as traditional skin stitching and hand poke artists. 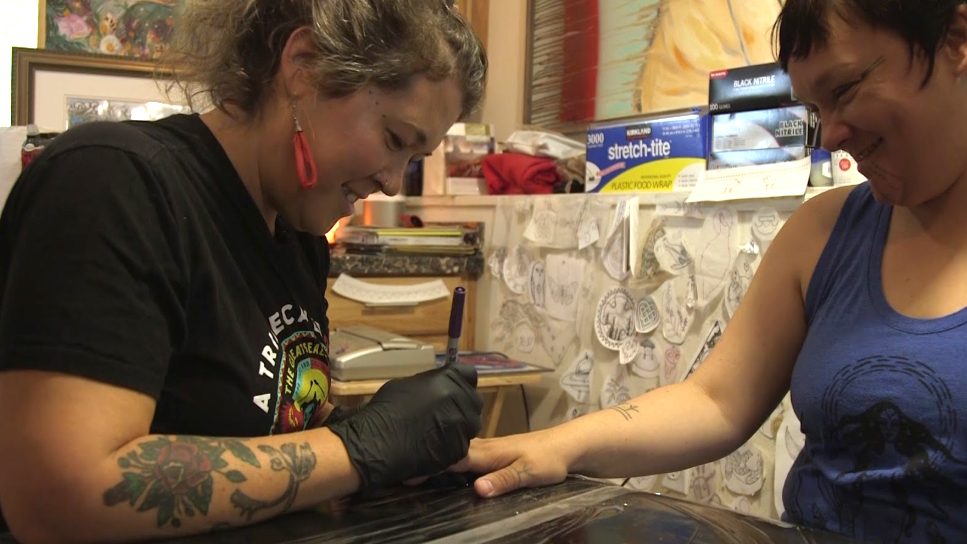 Sarah Whalen-Lunn (L) specializes in traditional Inuit tattoos and tattooing methods, which involves sewing into the skin or using a needle dipped in dye. Image by Hannah Lies/Alaska Public Media

In Nordlum’s experience, she is often approached in coffee lines and grocery stores and asked what her tattoos mean. The expectation that something like a tattoo can have a definitive meaning is an idea that cannot really be applied to these very personal markings. The Inuit culture and stories behind these markings are not something that can be boiled down into a few sentences.

“People get them for different reasons, they signify different things in their lives. I just like to keep an open mind and an open book always,” Nordlum said.

Nordlum started traditional tattooing because she wanted to give back. “I had been thinking about it for 20 years. And how can I not just get one, but do it right? What am I doing for my own people that is going to make it better,” she said.

Holly and Sarah are continuing to create community through these markings by training other Inuit women as apprentices. They are also currently working on a film, “Tupik: Inuit Ink.” that tells their story of reviving the traditional art form.