How artists are remembering Tamir Rice, 5 years after his death

Five years ago, 12-year-old Tamir Rice was shot and killed in a public park by a Cleveland police officer. The incident quickly became a rallying point for a growing national conversation about violence against black people at the hands of the police, and Rice continues to be a source of inspiration for artists.

Rice had just stood up from a concrete picnic bench under a wooden gazebo at Cudell Park when a squad car pulled up alongside him. The officer who shot the boy said the child was reaching for a weapon, which turned out to be a replica toy gun with its orange safety tip removed. Amanda King was a law student at the time.

“I was just getting out of class,” she said. “And I got an email from the Black Law Students Association saying that a child had been murdered at a recreation center on the West Side.”

Activists called the police shooting a murder. A Cleveland police consultant’s report stated that the officer had an “objectively reasonable” motive to fire. King’s reaction was to turn to the arts as a vehicle for social change.

“That day really told me to break the rules,” she told ideastream.

Her goal ever since has been to foster a new generation of social activists via the art of photography. She started an organization called “Shooting Without Bullets.” Its goal is to help young Clevelanders document the reality of their lives in pictures. 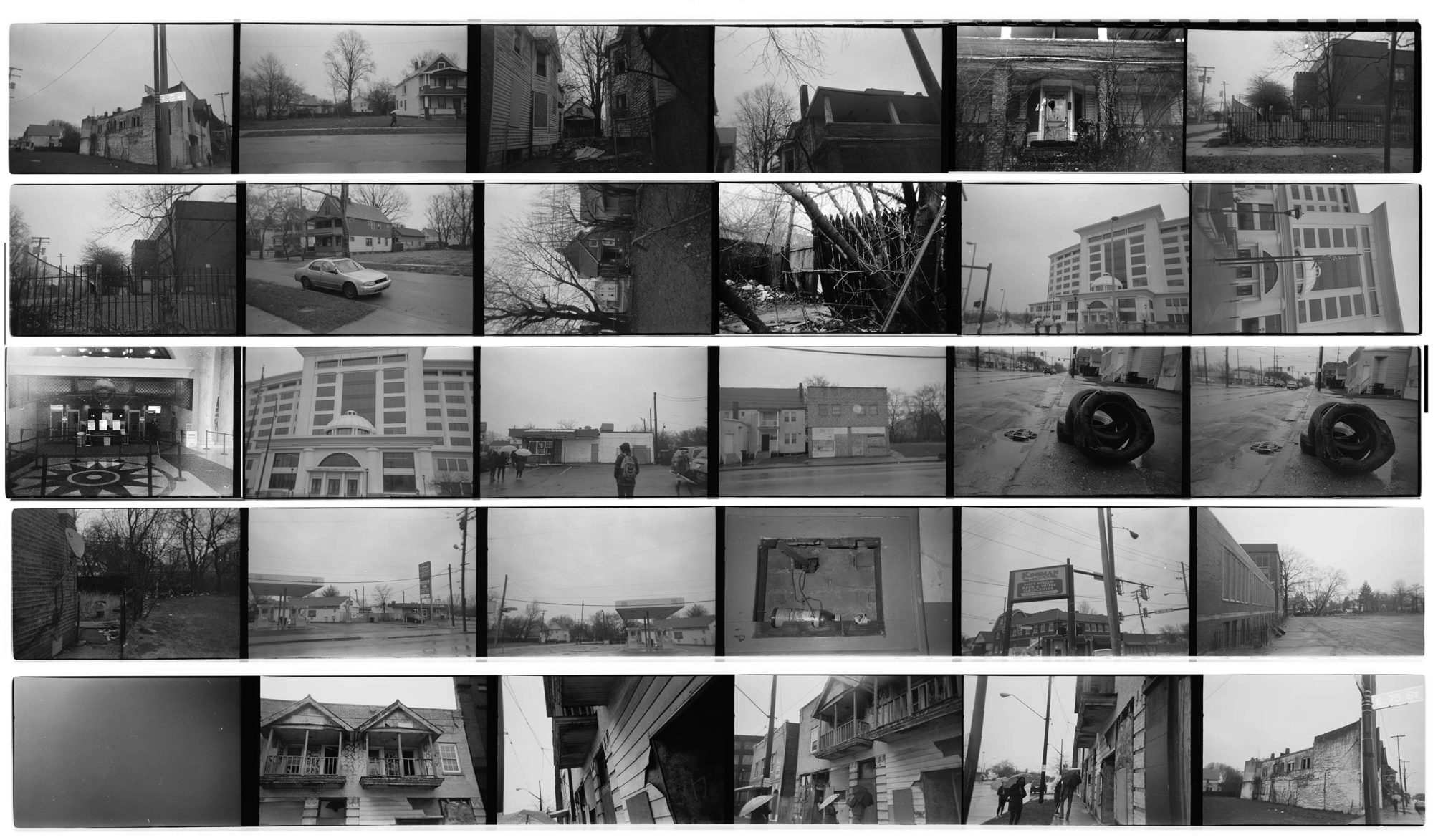 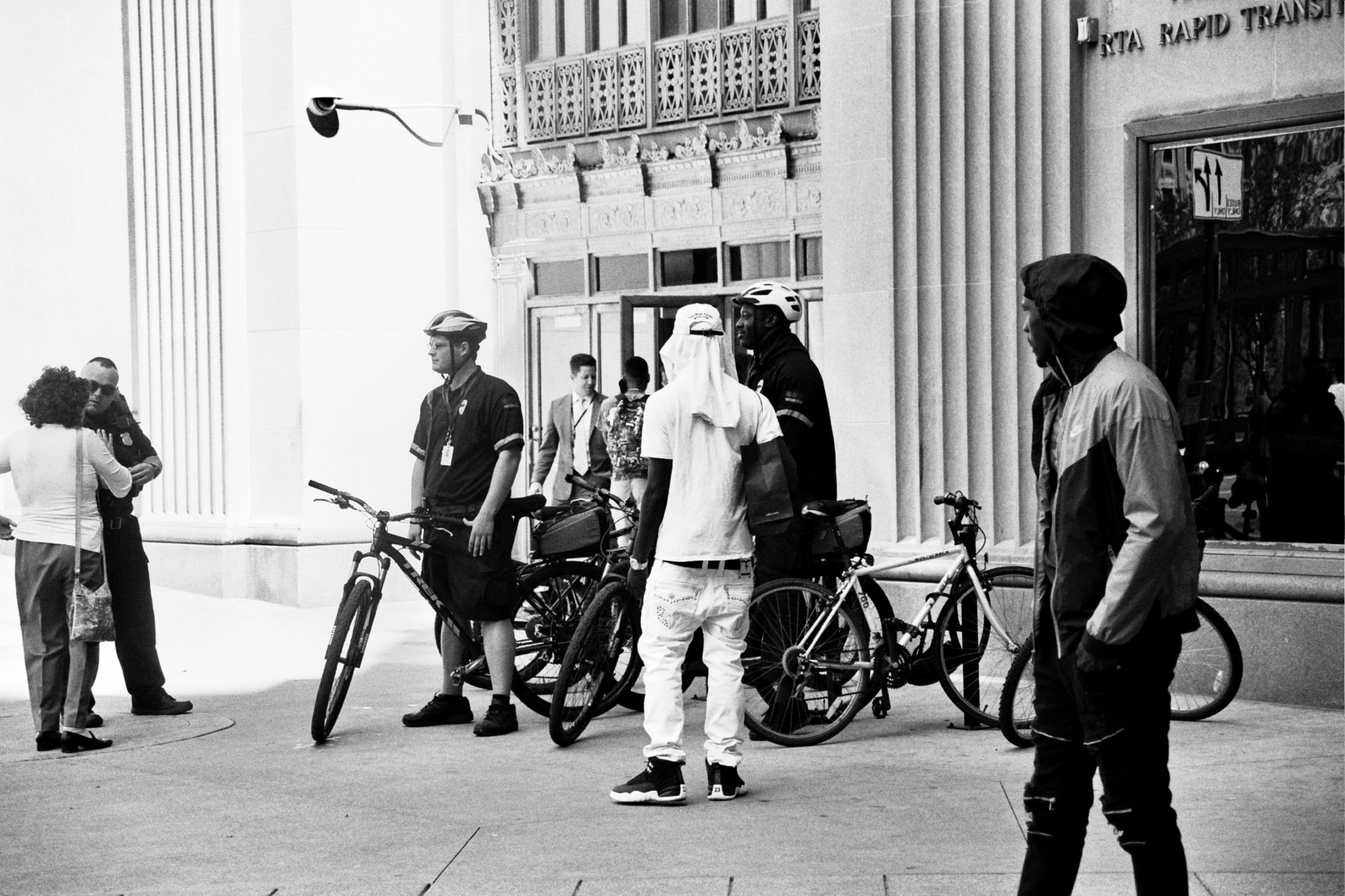 “I am very drawn to the arts, because artists are setting the moral standard for this country in a way that some lawyers and people in the legal community are not,” she said. 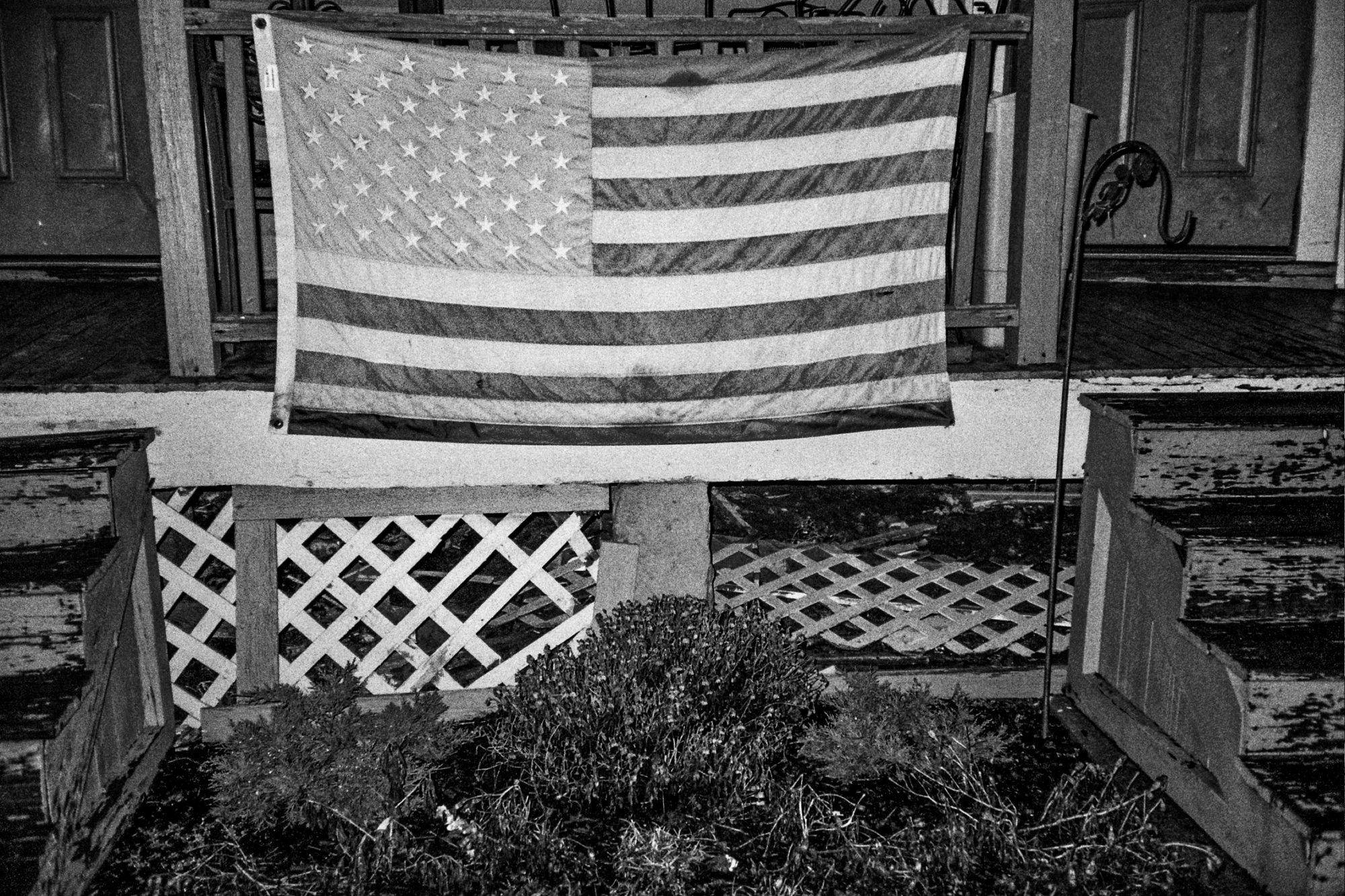 “Flag” by Charles Mosely, (2017). Photo courtesy of Shooting Without Bullets

The Cudell gazebo where Tamir was shot was removed from Cleveland in 2016 and relocated to Chicago, where another artist turned it into a very different form of art. Theaster Gates is the founder of the Stony Island Arts Bank, a museum and cultural center founded on Chicago’s South Side. He arranged to have the structure moved when he heard the city of Cleveland was planning to demolish it. Julie Yost directs public programming at the museum and said the gazebo can be seen in a number of different ways.

“It’s a tribute to Tamir, it is a memorial to him,” she said. “But I do also think that it is more than that. It’s a living object that can contextualize this ongoing issue of racial violence on black and brown young people. It’s as relevant to Chicago as it is to Cleveland, unfortunately.”

Rice’s story has motivated artists across the country. In 2017, Grammy-winning jazz trumpeter Terence Blanchard staged a multimedia production in Cleveland, partially based on the boy’s death. Earlier this year, Los Angeles-based EJ Hill created an art installation, the “University of St. Tamir, which imagined a fictional institution of higher education that catered to the needs of marginalized communities. In 2016, a group of Cleveland playwrights collaborated on a documentary production based on interviews with Cleveland community members about their hopes and fears, called “Objectively/Reasonable.” And, last year, Chicago artist Michael Rakowitz set-up a special exhibit in Cleveland related to the leaving of objects at the gazebo, such as teddy bears, candles, and handwritten letters.

“It leaves me speechless when I see a makeshift memorial anywhere, because it happens without the sanctioning or the permission of the city,” he said. “Nobody says you can do this. It happens and it happens as an impulse of people’s grief.” 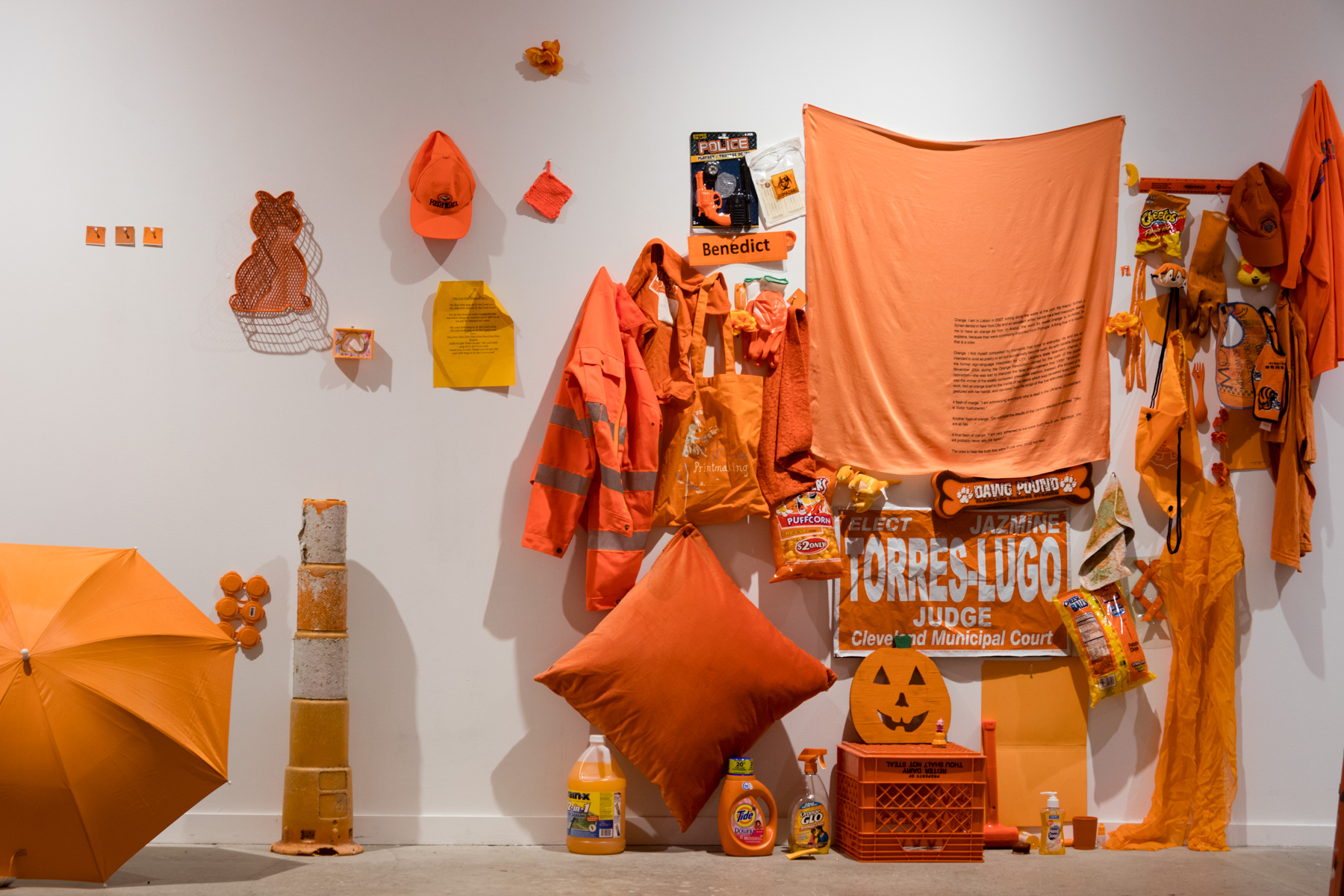 A makeshift memorial of orange-colored items on display in the 2018 “A Color Removed” participatory art project in Cleveland, led by Michael Rakowitz. The all-orange approach was meant to highlight the removed orange safety tip from the toy gun that Tamir was holding when he shot and killed by a police officer. Photo courtesy of SPACES for FRONT International: Cleveland Triennial for Contemporary Art 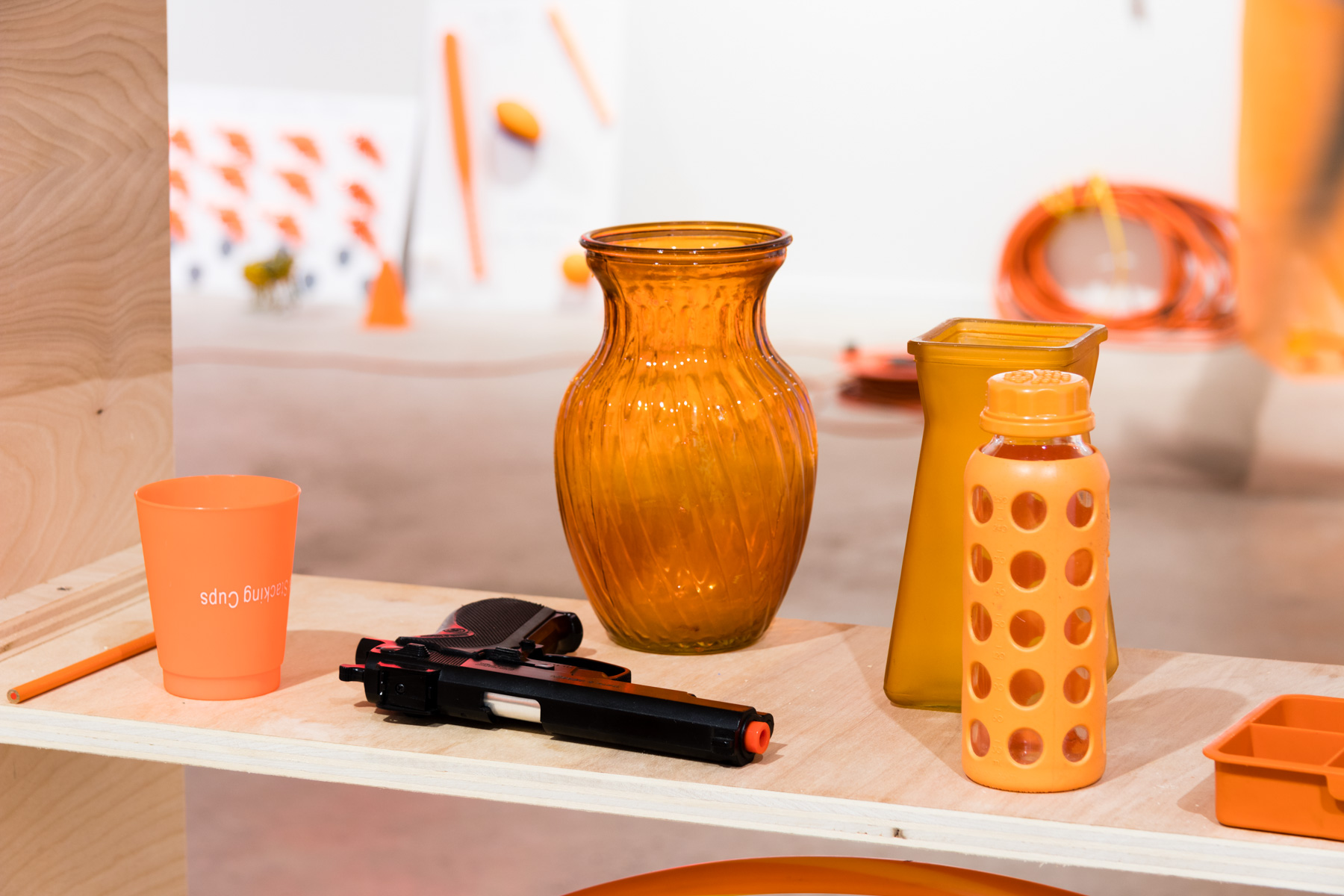 A closer-up of some of the orange items in the gallery tribute to Tamir. Photo courtesy of SPACES for FRONT International: Cleveland Triennial for Contemporary Art

Rakowitz’s idea was for people to collect orange-colored items from their lives so that they could be put on display in a Cleveland gallery. His objective was to highlight the removal of the orange safety tip from the toy gun that Tamir was holding when he died. But Rakowitz said the accumulation of personal objects had an unanticipated significance.

“This exhibition featured the orange objects that Clevelanders would surrender as a kind of votive, as a kind of surrogate for their mourning,” he said.

Rice’s mother, Samaria, also wants the arts to be a part of her son’s legacy. She’s looking to open the Tamir Rice Afrocentric Cultural Center in the city’s St. Clair-Superior Arts District. Gates, Hill, Rakowitz and King were part of an event this week at the Cleveland Museum of Art to promote that effort.

Simone Leigh will be first Black woman to represent U.S. at Biennale

Simone Leigh will be first Black woman to represent U.S. at Biennale