COLORADO SPRINGS, Colo. — “I love it!” actor Cheech Marin exclaimed, seeing the walls of the Fine Arts Center for the first time via Zoom.

Of course, he’s seen the works before — he owns them.

Sharing Chicano community, history and art is a full-time passion for Marin, who became famous during the 1970s as one half of the iconic comedy duo Cheech & Chong. Two dozen films, television series and countless comedy tours later, Marin, now 74, found himself in the perfect position to begin to acquire a lifelong love: art. 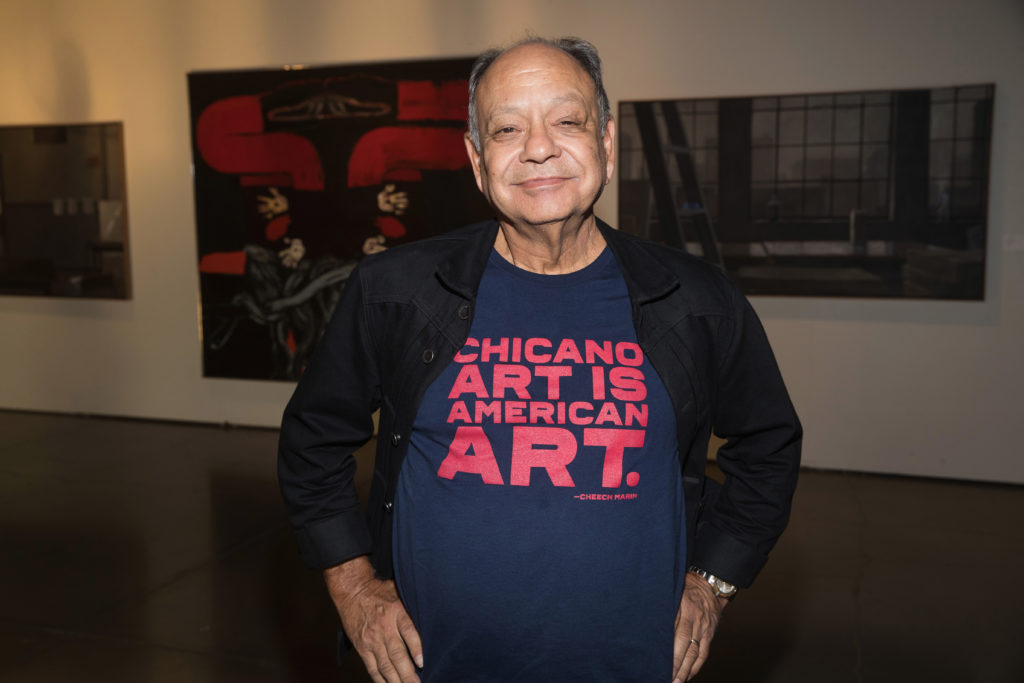 Comedian and actor Cheech Marin poses for a photo during the Seattle Art Fair in August 2017. Photo by Mat Hayward/WireImage

The exhibit, on tour in various forms since 2016, is called “Papel Chicano Dos: Works on Paper from the Collection of Cheech Marin.” It is on display at the Colorado Springs Fine Arts Center at Colorado College until June 26.

Marin said the exhibit represents “a small fraction” of a personal collection he’s been adding to for more than 30 years.

“It took a long time to get to a point where we had a building that would show it,” Marin said. “Museums are highly political organizations. In the beginning, no curator, no director of a museum, wanted to show this art – because they didn’t want to put their head on the block. Being Cheech was a double-edged sword. They thought I was pushing my cousin’s art, or something,” he laughed.

“But the art was great. And all of a sudden, the perception of what I was doing changed.” The collection, he said, routinely breaks attendance records at venues around the nation. “You don’t have to push it after awhile. You just have to show it. When you get to that point, it’s great.” 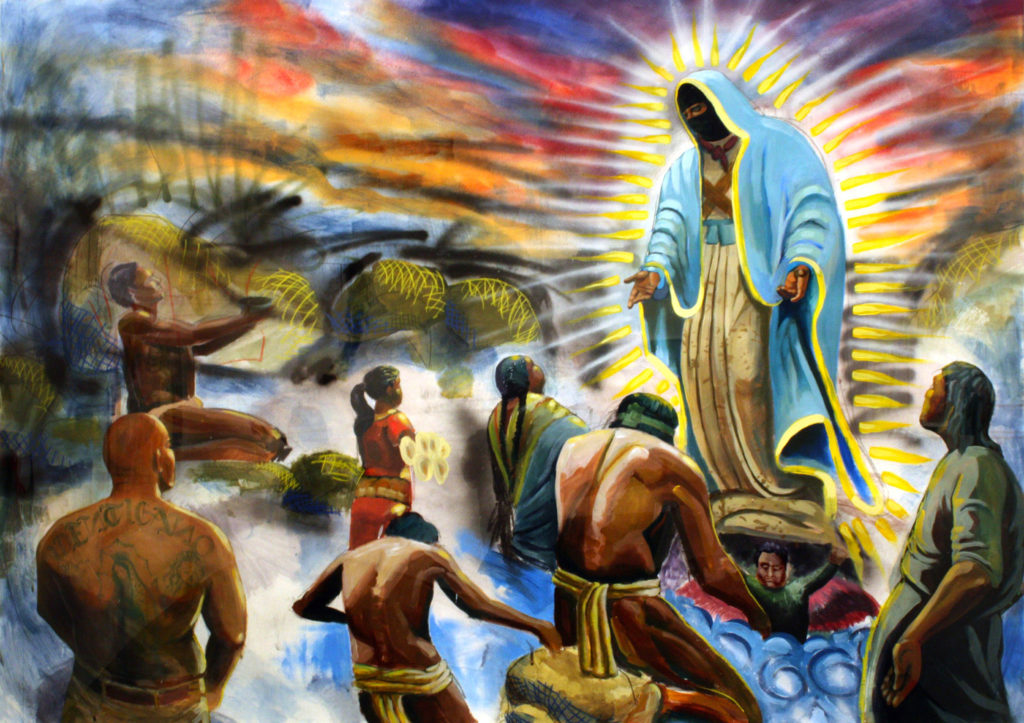 “It’s socially relevant, and fun – it’s not often those two paths convene,” Marin said. “It is a plus for our nation, as we’re accepting and appreciating the diversity of our country.”

Viewing the exhibit through his computer, a set of a half dozen ink, chalk, gesso, and watercolor works by Sonya Fe, “Retold Story of La Llorona #1-6,” caught his eye. 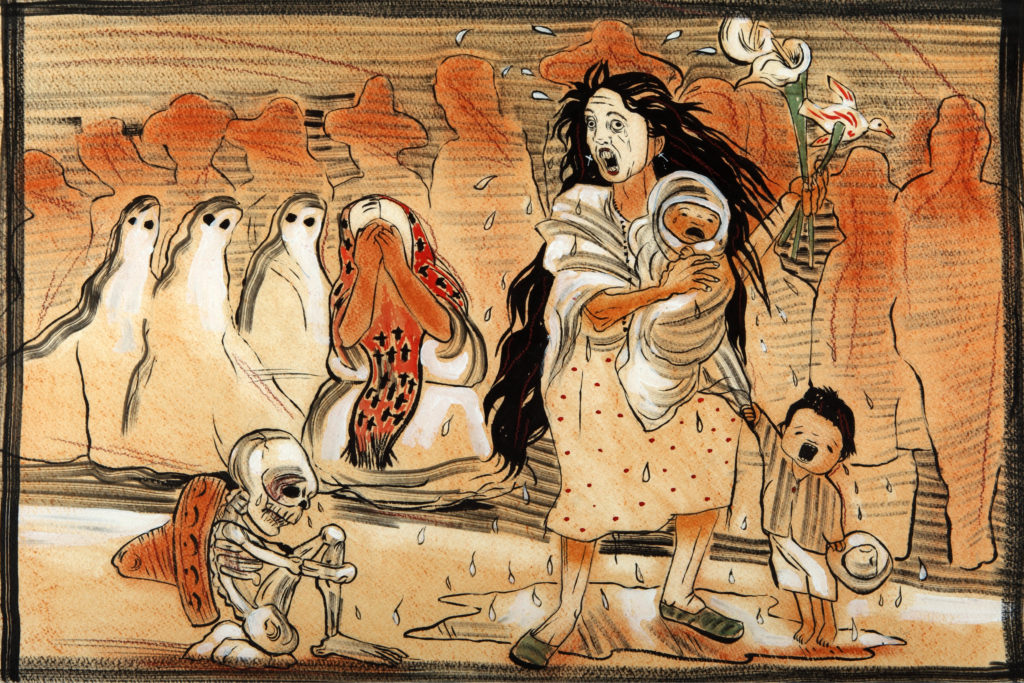 “Shunned by Her Pueblo” is the fourth painting in Sonya Fe’s six-painting series, titled “Retold Story of La Llorona” (2000). The Chicana artist depicted the traditional Mexican legend of the weeping woman through a feminist lens.

A studied art history buff and collector, Marin sought out each artist’s work himself.

“I wasn’t a zillionaire hiring other people to collect for me,” he told Rocky Mountain PBS. “So the pieces in the collection are very heartfelt. I don’t pick art just to have it.”

Raised in a blue-collar, working-class Chicano family in Los Angeles, Marin grew up with a playful competitiveness with his cousins, who urged each other to pursue academics.

“My cousin Louie assigned us all subjects to learn about and bring back to the group,” he said. “And I got art! So I studied art from a very early age.”

After looking at every art book in the library, Marin said he was hooked, finding joy in identifying major and minor artists, methods and techniques.

“By the time I got to actually being able to purchase some art, I knew a lot about it,” he said.

Marin said he found himself in a “lucky position” to begin amassing works by Chicano artists, both celebrated and unknown.

“I was the right guy at the right time, with money — and I was a known celebrity,” he said. “All those factors came together.”

His collection now has about 700 pieces. The distinction? “I always look for craftsmanship,” he said.

The idea to share his art collection came from friends.

“I had this big collection, and I showed my art friends. And they said, ‘Well, you’ve got to show it! Because it does you no good in storage, or under the bed. People have to see this,’” he said.

Following a decade of planning, parts of his collection have visited more than 55 museums and galleries nationwide — unheard of, Marin said, for a private art stash.

Marin said his collection of Chicano art often outnumbered most venues’ where the art was shown.

“At most museums, I was telling them, ‘I have this collection — because you don’t,’” he said.

“Chicano art is American art,” he continued. “Chicano is one definition of America — European plus Mexican — it defines a lot of what America is now. Chicano art is where traditional Mexican meets American pop.” 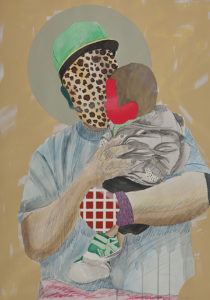 The Chicano art movement began as the visual arm of the Chicano civil rights movement in the 1960s, often featuring vibrant iconic cultural and folkloric imagery.

“Original Chicano artists like Carlos Almaraz and Frank Romero were the sign painters for that revolution,” Marin said. “They did the backdrops and the placards to show a visual sense of the political aspiration.”

Sonia Romero — the daughter of Frank Romero — has contemporary work depicted in this show.

“This exhibit lends itself to an appreciation of the diversity of our country. A lot of people don’t even know what a Chicano is. They think it’s a tasty cheese snack or something. ‘Ooh, a Chicano! I love crispy Chicanos, they’re so good!’” he laughed.

“It’s a gradual understanding,” he continued. “And the only way there is a gradual acceptance, is if you see it. And that’s what this touring exhibit is all about.”

After stewarding a large exhibit for many years, Marin decided to bring facets of his collection to more specific audiences, designing smaller shows that could easily fit into regional museums and galleries. It cuts down on the long lead times required for larger museums — often years, he said — and allows the works to enter communities that are usually overlooked by larger art exhibits.

“It’s nice to play the Smithsonian, it’s nice to play LACMA. Those are important institutions, and it’s a verification of the work, to be sure,” he said. “But I wanted to get this work into spaces that really serve their communities. To play a Waco, Texas, or a Colorado Springs, Colorado — it ultimately helps more people see the work.”

“My mantra has always been, ‘You can’t love or hate Chicano art unless you see it,’” Marin said. “And now when I see art that says something, then I’m on a mission to get it and to show it. I’m so glad we can bring it to people.”

In fall 2021, Marin will help unveil The Cheech Marin Center for Chicano Art, Culture & Industry, or simply “The Cheech,” a 61,420-square-foot art and cultural center in Riverside, California. It’s one of the largest Chicano art collections in the United States.

“It’s going to be a dynamic interaction between the community and the museum,” Marin said. “It feels very empowering.”

Marin said he’ll give the majority of his collection — including paintings, videos, sculpture and photography — to The Cheech for permanent display, while a portion of the work will continue to tour nationally and internationally.

“It was so much fun collecting this art,” Marin said. “I don’t know if I’ve ever done anything that was more fun.”