A drag king couple on the power of their art

LITTLETON, Colo. — Styler Ells and Jax Nelson are side by side, sharing the space in their small bathroom. Styler dips a brush into a makeup container. Jax is working on the contour on his face.

“Drag is art,” Jax says, “everybody has their own different style, which is amazing. Some people love it, some people don’t, but it’s your art.”

The pair are drag kings, or entertainers who dress and perform stylized forms of masculinity, whereas drag queens perform femininity. People of any gender can perform drag. As the drag community grows, so do the types of performances. “Drag used to be so binary,” Styler says. “You were either a drag king or a drag queen … and now, I feel like drag is really any way that you want to express your art. It’s just this amazing exploration of self.” 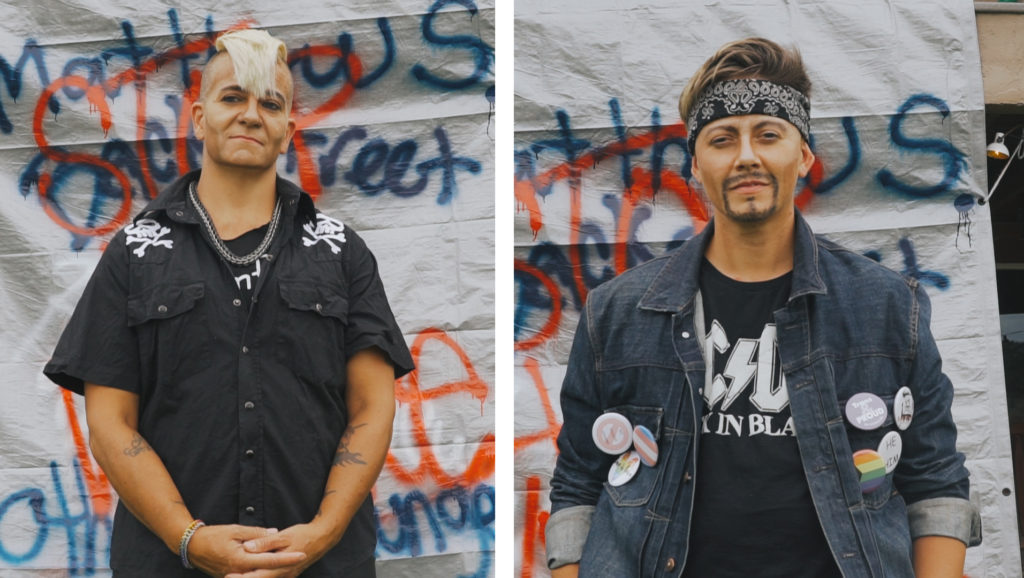 Styler, who doesn’t have a preference on pronouns, used to do drag years ago, but revisited the art form two years ago, when their youngest child came out as queer. With two children who identify as LGBTQ, “I thought this might be the time for me to get back into the community and really try to start making an impact.”

Styler has been supportive of their kids, just as their parents were. “I had amazing parents, when I told them I was gay, my mom was like, ‘It’s about time.’”

They’ve been performing as Styler since they started drag, but recently started using the same name as their out-of-drag persona as well.

“I’ve been going through an identity crisis,” Styler says, laughing. “I do identify as nonbinary, so I feel like I’m experiencing an intertwining right now, of my drag persona and my real-life persona.”

Jax, who performs as Justin Time, came out as trans about a year and a half ago. Coming from a religious household made coming out difficult for him.

“[My family] had a hard time with the gay part, but coming out as trans, it was not okay. I don’t really talk to them anymore.”

Since coming out, Jax says his drag is now more campy and funny. “I think it’s because I finally realized who I am.”

In the couple’s backyard, there’s a large chicken coop, along with rabbits, two goats and a pig. They feed the chickens a large piece of a watermelon.

“When I was little, I always wanted a farm,” Jax says. “I always loved animals … something about them, they don’t judge you.”

“Pride is really an opportunity for us as a community to come together and show solidarity for everyone, and that’s everyone who lives in that alphabet soup that we call the queer community,” Styler says, “and to keep an open mind because you have no idea what the person next to you has gone through or experienced and if we protect each other then we’re going to be solid.”