COLORADO SPRINGS, Colo. — On a hot summer morning, in a parking lot near the Colorado Springs Pioneers Museum, several vehicles have a common bumper sticker for the state: an image of a license plate, proclaiming, in all caps, “NATIVE.”

The stickers are meant to distinguish between those who were born in Colorado and out-of-state transplants.

But to people of Indigenous descent, non-Native settlers are all relative newcomers. What is now Colorado Springs was once inhabited or frequented by nearly 50 Native tribes that had trade and cultural ties to the area for hundreds to thousands of years before colonization.

Misrepresenting that history is a cultural disservice, said Gregg Deal, who’s an enrolled member of the Pyramid Lake Paiute Tribe.

“There are Native people in this community that have been in this community for a long time,” Deal told Rocky Mountain PBS. “Spaces like Colorado Springs need to take that step, to engage the process of even just recognizing that Indigenous people were here before any sort of settlement or colonization happened.” 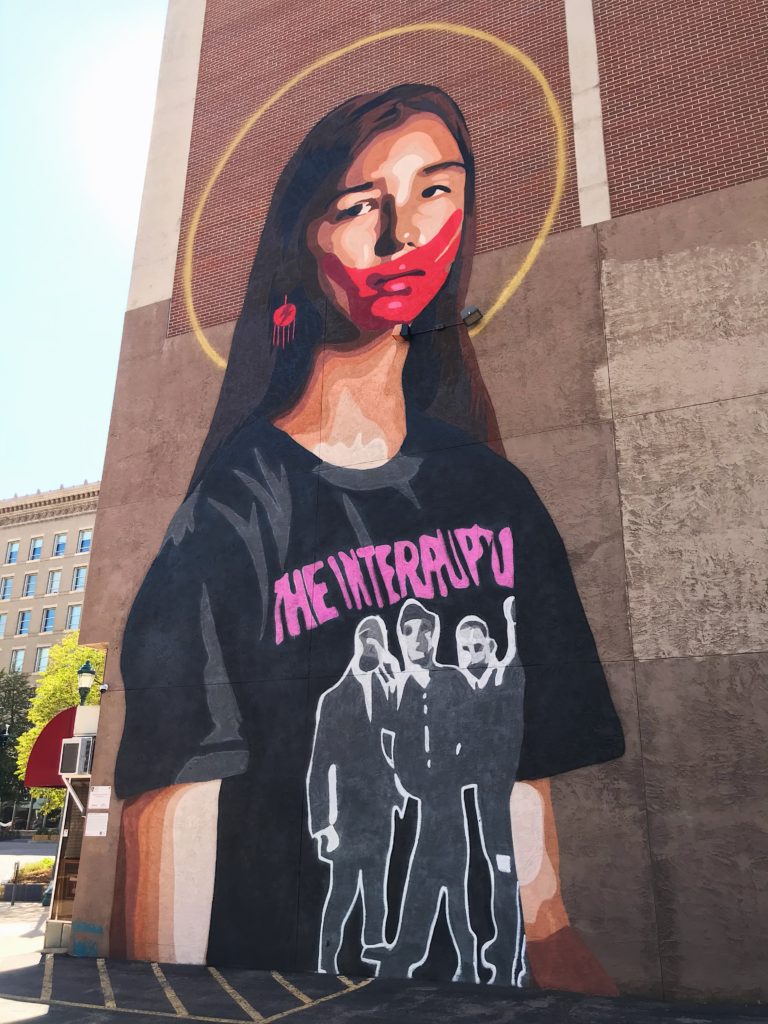 Artist and activist Gregg Deal addresses the disproportionate statistics of violence against indigenous women, girls, and “two-spirit” individuals in a new, 60-foot-tall mural in the heart of downtown Colorado Springs, part of the 2020 Art on the Streets program. Photo by Kate Perdoni/Rocky Mountain PBS

Today, Deal offers a 60-foot-tall conversation starter via an original mural he has painted on an exterior wall at the corner of Tejon Street and Pikes Peak Avenue, in the heart of downtown Colorado Springs.

Supported by a telescopic boom lift and working day and night, Deal brings Indigenous experiences to the forefront of the city scape. The mural, titled “Take Back the Power,” is part of the 2020 Downtown Colorado Springs Art on the Streets public art program.

“It’s going to get hot today,” Deal laughed as the lift rose toward the largest mural he has ever painted.

Colorado gained statehood in 1876, five years after the city of Colorado Springs was officially colonized in 1871. Absent in many recollections of its celebratory foundation are the brutal means to the end that cleared the way for settlers to capitalize on the area’s natural resources.

“There’s an omission of history,” Deal said. “And if we don’t talk about Native people in history, and their contributions, or even their existence within spaces that have been settled and colonized, then they don’t exist. And that does a disservice not only to American history, but also to Indigenous people — particularly to youth, who are looking for representation of themselves in public spaces.”

The mural depicts a portrait of Deal’s 14-year-old daughter, Sage, wearing a T-shirt of The Interrupters, her favorite band, while a large red hand print covers her mouth.

The red hand print is symbolic of a continuation of missing and murdered Indigenous women, girls, and “two-spirit” individuals, Deal said. (“Two-spirit” refers to a person who identifies as having both a masculine and a feminine spirit, and is used by some Indigenous people to describe their sexual, gender and/or spiritual identity.) In the United States and in Canada, violence against Native women, girls, and two-spirit individuals is endemic, and they disproportionately face domestic abuse, sexual assault, rape and murder.

According to a National Institute of Justice research report, more than four in five Native American and Alaska Native women suffer domestic or sexual violence at some point in their lives. And according to the U.S. Department of Justice, at least 86 percent of reported cases of rape or sexual assault against Native women are inflicted by non-Native perpetrators.

“As an Indigenous person who cares about their relatives, and as a father who has two daughters, I care about their safety,” Deal said. 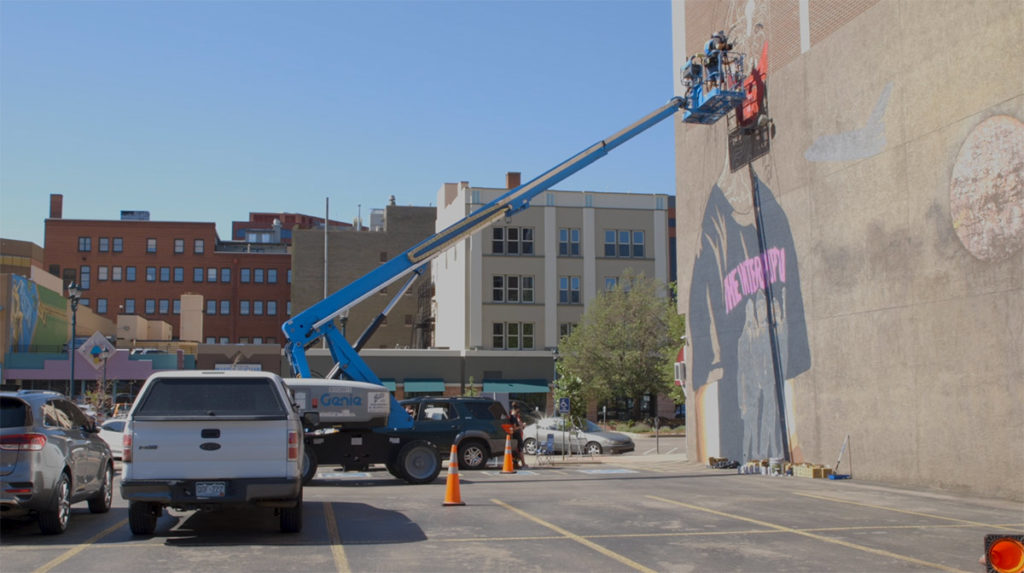 Snowbird said this disparity of justice exists in large part because of the absence of federal investigation and prosecution when crimes are committed within the jurisdiction of tribal law.

According to the National Institute of Justice, in 1978, the U.S. Supreme Court ruled that tribes did not have criminal jurisdiction over non-Native perpetrators. This means that federally recognized tribes have no authority to criminally prosecute non-Native offenders — even for crimes committed on tribal lands.

The 2013 reauthorization of the Violence Against Women Act also reaffirmed the power of tribal authorities to prosecute non-Natives in domestic violence cases. But, Snowbird said, the measure “just isn’t across-the-board yet due to lack of capacity, funding and other issues.”

Snowbird’s work stands in prevention, as well as in memory of those lost. Like Sheree Barker, whose family is Hunkpapa Band of Lakota from the Standing Rock reservation. “Sheree is a local woman who was born, raised, and murdered here in Colorado Springs,” Snowbird said. “She was killed in front of her 6-year-old son.”

The Haseya Advocate Program provides support and advocacy for Natives, fostering a sisterhood for survivors in El Paso County. “We can hopefully prevent even one more missing or murdered Indigenous woman,” Snowbird said. “We have to stop our sisters, our mothers, and our grandmas from being another statistic.”

According to the FBI’s National Crime Information Center, in 2019, 5,600 Native women were reported missing in the United States.

Deal said U.S. government statistics are not properly followed or taken care of because Native Americans are a smaller part of the demographics in the country.

“We just kind of fall blind,” he said. “I wanted to do a portrait that would have a significant nod towards the missing and murdered Indigenous women, girls and Two-Spirit individuals, and also the intersection of just regular American life.”

Authentic representation of the modern Native experience, he said, means a lot to those who do not see their likeness reflected within Americans’ portrayal of Native voices.

“That’s why you get into mascots, and you get into stereotypes, and all these other things that create a misrepresentation of Indigenous people,” Deal added.

For Claire Swinford, urban engagement manager for downtown Colorado Springs and coordinator of Art on the Streets, the message is a necessary one to incorporate into downtown’s cultural sphere.

“This is a work that is truly site-specific,” Swinford said, “not only specifically created for the building that it’s on, but specific to this community.” The mural provides context and a message that is “immensely powerful,” she added.

Deal credited Swinford and the Art on the Streets program for its perseverance in supporting Indigenous issues with a visual presence downtown.

“I think we’re really lucky to have allies that are in spaces that recognize and realize they need to make room for these marginalized voices,” he said. “We’re seeing this across the country right now, with this national discussion of race and equity among people of color, particularly Black, Indigenous, Latinx, and even the gender spectrum. These are conversations that need to be happening, and I’m excited to be participating in that on some level.”