KANSAS CITY, Mo. — For artist Emily Alvarez, painting images of people like her and her family helps establish their place in society.

Alvarez’s works are on display in several public spaces in Kansas City metro such as the Aquatic Center locker room for a local Girl Scouts council and Bridge Space, a coworking space in Lee’s Summit, Missouri.

The mural she’s painting now in Overland Park, Kansas, represents agricultural workers. In it, two women with brown skin work the fields; one woman looks up, her yellow hat shielding her from the sun. The second looks down, her head wrapped in a blue scarf.

The daughter of immigrants from the Dominican Republic and Cuba, Alvarez is one of the few Latina muralists in Kansas City, and her work depicting Hispanic and Latino people is personal to her.

“At every opportunity I get, I try to elevate them and represent them and let them be seen,” she said.

Too often though, many Latinos don’t feel seen. Isaac Tapia, an artist from Kansas City who works out of his studio space at InterUrban ArtHouse, had one word to express how he felt about not feeling represented.

This is why, during a First Fridays bash at Mattie Rhodes Center in May, Tapia scribbled a note to Kansas City PBS’ curiousKC:

“Why aren’t there more Latinx murals in Kansas City?” 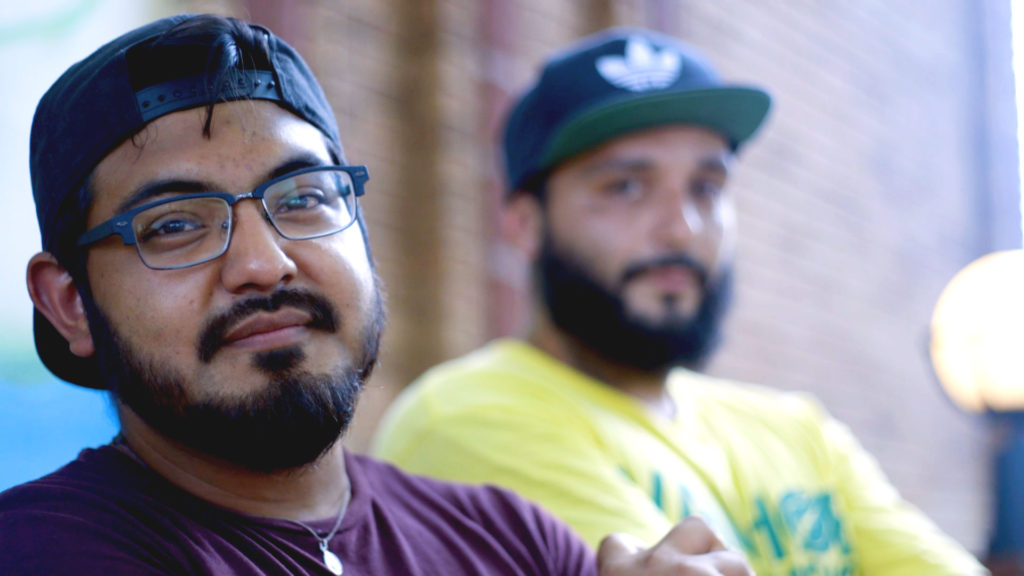 The Flatland team reached out to historians, cultural directors, curators, sociologists and artists, many of whom identify as Hispanic or Latinx. (Hispanic refers to people from Spanish-speaking countries. “Latinx” is a gender-neutral word for people from Latin America or of Latin American descent.)

Their answers show what is lacking in the area: publicity, resources and perspective. But it also shows that artists are willing to take up the palette for the next generation.

What a mural can mean to the community

Like its fountains, Kansas City has a lot of public art. The art represents what and who the city is.

Yet, a quick scroll through a Kansas City, Missouri, tourism site that shows a group of “iconic murals in KC” doesn’t feature any murals that represent the Latino community. That doesn’t mean there aren’t any Latino murals.

Through email, the tourism board VisitKC said its article was “not intended to be a comprehensive rundown of all the city’s murals or the artists behind them,” but that they plan “to enhance the representation of both.” And representatives from both Kansas City, Missouri, and Kansas City, Kansas, said there’s no way currently to track art in the city’s public spaces. The Office of Culture and Creative Services in KCMO hopes to create a database with that information next summer.

For many Latino artists, murals help illuminate what it means to be Hispanic in the here and now.

Take, for instance, the Argentine mural by José Faus, a well-known Kansas City artist, poet and teacher. When he got to the neighborhood, overgrown weeds and graffiti were rampant. But the mural transformed the area into a hub for conversation and community. 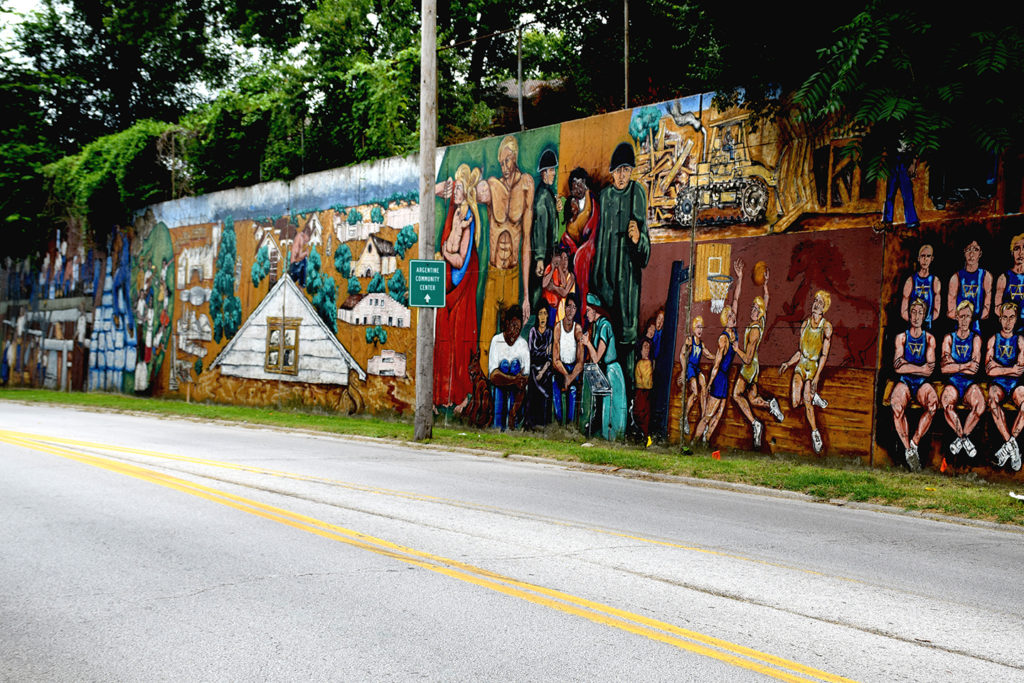 The Argentine mural in Kansas City, Kansas, is a work that spans 220-yards on Metropolitan Avenue. It’s a visual history of the neighborhood. Photo by Sandy Woodson/KCPT

“(It’s) a community staking a claim to their own history and their presence in Kansas City,” said Theresa Torres, a sociologist at the University of Missouri-Kansas City. “And I think that’s what murals are really all about.”

How to make a living making art

A big reason for the dearth of Latino murals is business.

Overall, the arts are profitable. ArtsKC – a nonprofit arts organization that provides research and programs – found that the arts and culture sector is the city’s third-largest private sector employer.

However, Latino art in public spaces might not be evident because, for many, a career in art doesn’t seem secure. Young artists often lack knowledge about how to value their work monetarily.

“It’s hard to sustain when you constantly have to fund it yourselves,” Faus said.

Faus has painted almost 25 walls in the Kansas City metro area, as well as Lawrence, Kansas, and said he’s witnessed young artists give their work away for free. Young artists don’t always know how to negotiate pay, which goes beyond the price of paint and other supplies.

Rodrigo “Rico” Alvarez agrees. Alvarez is also Tapia’s friend and business partner. The artists met at Paseo Academy of Fine and Performing Arts in high school and have their own company called ITRA, which stands for each of their initials. Through their work, they hope to inspire young artists.

“I feel like our youth, people of Latin (descent), don’t see art as a form of living that could be self-sustainable, so they shy away from it. So money right now could be the factor that’s making these kids running for the hills,” Alvarez said.

Young artists who are eager to paint a wall might do it for free, only asking patrons to pay for supplies. But Rico and Tapia want to educate up-and-coming artists so they know how to work the art and business in tandem.

In Kansas City, the tides are shifting.

Alvarez, Tapia and Alvarez are working on a series of murals in downtown Overland Park, which was unheard of years ago.

Faus knows that’s true because he tried almost 30 years ago. He said, then, there was a lack of community support for Latino art in public spaces. But now, years later, he’s hopeful for the future.

“(The) culture is changing. I see the streets in Kansas City are looking kind of hipster in a way – embracing the style that they used to hate. I think it’s just a matter of time,” he said. 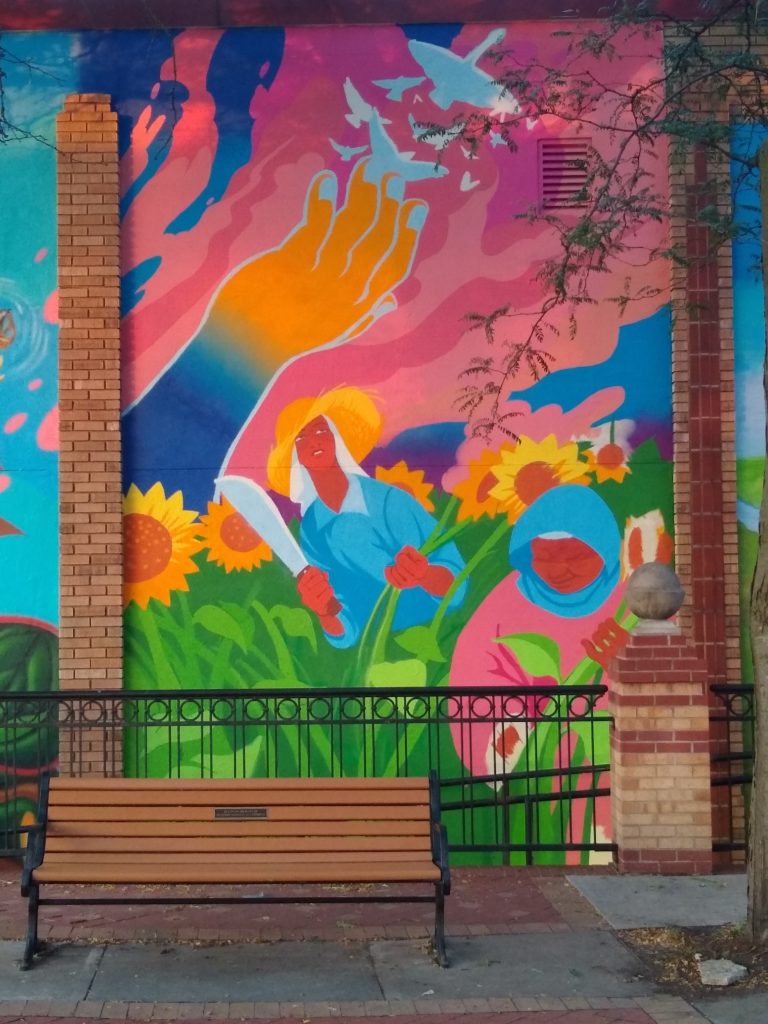 For Emily Alvarez, her mural ”Esperanza” is a chance to represent agriculture workers. Photo courtesy of Emily Alvarez

They are satisfying a need that even Deanna Muñoz, CEO of the Latino Arts Foundation, said has been missing. Her new office, which is across from city hall, dons a mural that “is all me.” For her, that means lowrider cars, and a woman with brown skin, hoop earrings and lips outlined in wine-colored paint. The mural makes her feel seen.

“You don’t have to go to L.A. to see this,” she said. “It’s right here.” She smiled because she saw herself, someone who looks like her, in Kansas City.

Tapia’s question came from a place of wanting to know his community leaders and to find a way to represent them in art. Rico wants to teach the next generation of artists to be business savvy. And Alvarez wants to display the different layers of Latinidad, of being Hispanic or Latinx.

“(There are) so many cultural backgrounds, such colorful heritage, that I think needs to be represented more in the variety that it exists in,” she said. “I would like to do my part if I can.”