A performance that brings Black stories to white-dominated spaces

HARPERSVILLE, Ala. — About four years ago, while at an art symposium in Germany, Tanya Wideman-Davis and Thaddeus Davis found themselves wondering, “Where do Black bodies matter, do they matter, and in what spaces do they find confidence?”

The two directors of Wideman Davis Dance were then inspired to create a performance that reflected Black lives in places where their presence hasn’t been thoroughly considered. With the Black Lives Matter movement heavily on their minds, they worked with visual and performance artist Michaela Pilar Brown, curator and scholar of performance theory Myron M. Beasley, and dramaturg Gina Kohler to create an immersive, site-specific dance performance that explores the enslaved existence of Africans and their descendants in America. The chosen setting for that dance, called “Migratuse Ataraxia,” was historically oppressive to Black people: antebellum plantations.

A snapshot of how performers from Wideman Davis Dance move within Klein-Wallace Plantation in Harpersville, Alabama, for “Migratuse Ataraxia.” Video by Kelsey Harrison/APT

“In order for Black lives to matter in 2016, we needed to go back to the beginning of Black lives on this soil,” Thaddeus Davis told APT about developing the project. “If we can unearth the kind of humanity and the sense of Black lives mattering in say, 1800, then we have a legacy of Black lives mattering, so then when we go ‘Black Lives Matter,’ well, of course they do, because they’ve always mattered. But we have to imagine their mattering in historically oppressive places, we don’t visit spaces where they first lived and see the evidence.”

For the show inside the Klein-Wallace Plantation in Harpersville, dancers and artists facilitate the way audiences move through the rooms, witnessing vignettes. They include a young Black man learning survival from an older Black man, a dancer in conversation with their ancestor, a church scene, and one in a barber shop where historically all information is exchanged between Black men. Close proximity is an intentional element of the performance that blurs the line between audience and performer so all are participants.

“Audiences can expect to be fully integrated into the show, immersed in an experience that has multiple sensory engagements,” Tanya Wideman-Davis said of the show. 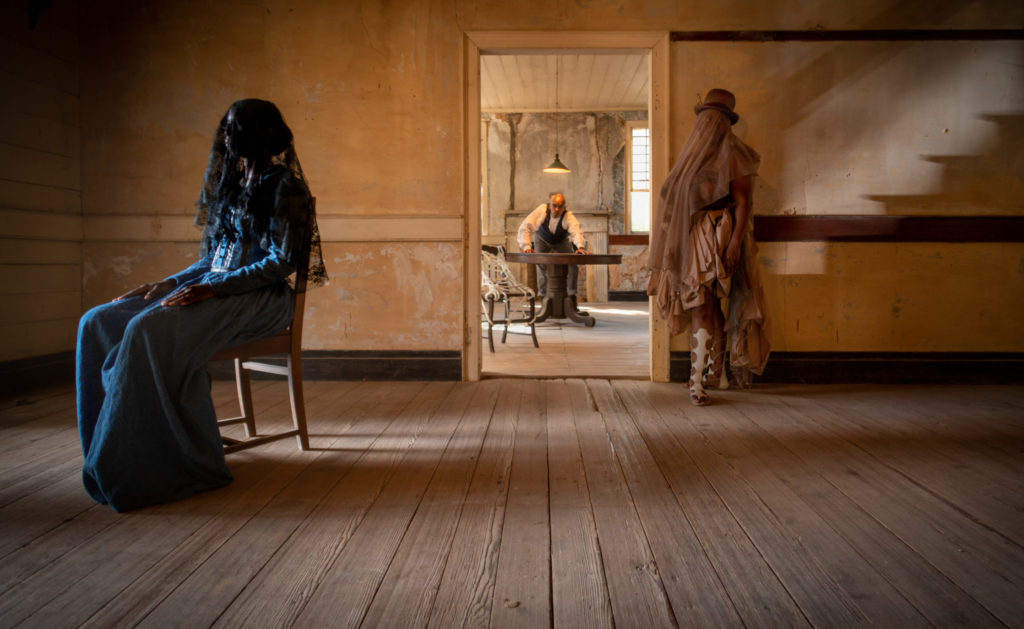 Michaela Pilar Brown, whose art installation can be found inside the plantation, tailored her work specifically to the community hosting “Migratuse Ataraxia,” incorporating objects brought by community members that speak to their history. Installation elements included cotton picked from nearby fields, tools used on the land, as well as photographs and books provided by descendants of the property to various parts of the plantation.

Unlike their original vision of an antebellum museum space, “Migratuse Ataraxia” debuted in January 2020 at a much more raw venue. The plantation, located 45 minutes outside Birmingham, Alabama, had no running water, no air or heat. Everything had to be brought there. Klein Arts and Culture, the nonprofit that owns the plantation, is dedicated to re-enlivening the space with art to facilitate racial reconciliation, and “Migratuse Ataraxia” was their first public event.

After debuting in Harpersville, the show was scheduled to tour antebellum historical sites throughout 2020. Performances have been postponed due to the COVID-19 pandemic, and Wideman Davis Dance reports that they will be reengaging with presenters in spring of 2021. In light of the protests this year over racial injustice and police violence against Black Americans, Tanya Wideman Davis and Thaddeus Davis said they have been discussing new veins of the project, wondering, “How does ‘Migratuse Ataraxia’ come forward in time?” While performances are on hold, they are incubating and exploring new creative experiments to address the present moment.