Los Angeles — With a growing fan base, all-women mariachi groups have been making significant inroads in the historically male-dominated music genre. Their artistry has taken them to the White House, and as far as Beijing for the Olympics, and earned Grammy and Latin Grammy Awards. They even have their own festival, the annual International Women’s Mariachi Festival, that’s taken place since 2014.
“Los Angeles has historically been the center of innovation, leadership and opportunity for women in mariachi music,” said Leonor Xóchitl Pérez, the executive director of the festival and the Mariachi Women’s Foundation.

During the 1950s and ‘60s, all-women mariachi groups from Mexico traveled to Los Angeles and played at the historic Million Dollar Theatre downtown. In the ‘70s, “mariachi women pioneers Rebecca Gonzales and Laura Sobrino and then in the ‘80s, Monica Treviño were given the opportunity to perform alongside the world’s best male mariachis, Nati Cano’s Mariachi Los Camperos and Sol de Mexico,” Pérez added. Years later, in 1994, Cuban American producer Rodri J. Rodriguez hosted all-women mariachi groups at the Hollywood Bowl’s Mariachi USA Festival that drew thousands of fans.

L.A.’s all-women bands continue to make history with each performance. To date, they include Mariachi Reyna de Los Angeles, Las Colibrí, Mariachi Divas de Cindy Shea, Mariachi Las Catrinas, Mariachi Lindas Mexicanas and the Mariachi Conservatory All-Female Ensemble. Unlike their counterparts in Mexico, which tend to have male conductors, the majority of these groups are managed and led by the members themselves, Pérez said. 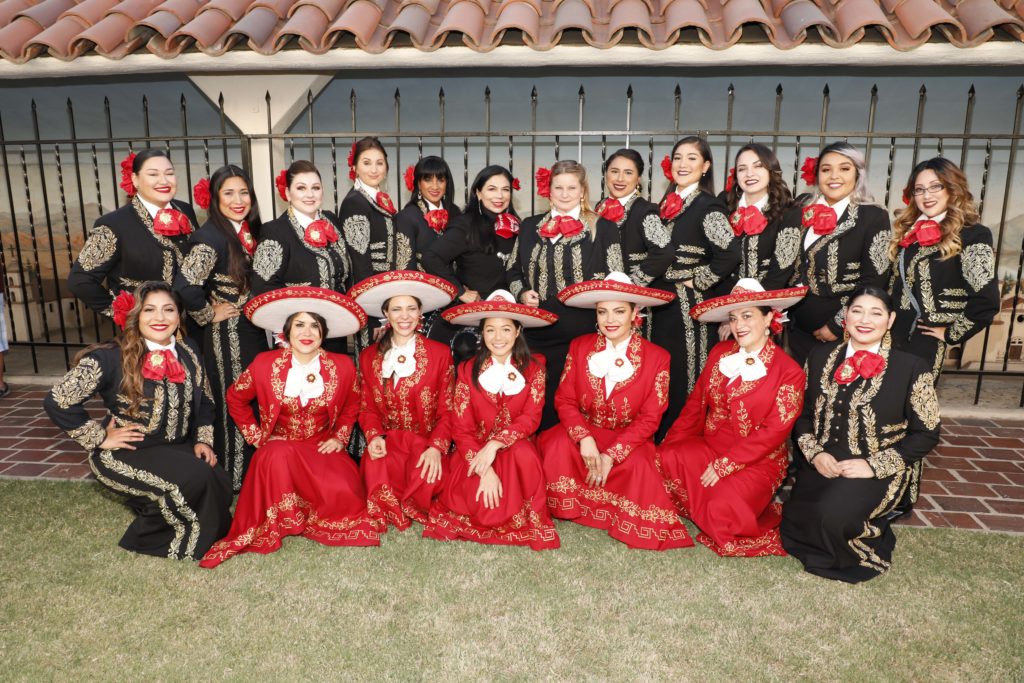 Mariachi, which originated in Mexico, is influenced by the rhythms and lyrics of African culture, and all the instruments long associated with the genre — the vihuela, guitarrón, guitar, harp, trumpet and violin — evolved from those that arrived from Europe.

The emergence of the mariachi women

Pérez places the earliest reference to mariachi music at 1852.

“Through the writings of a priest, we learned that mariachi music was performed [by men] in rural areas of Mexico,” she said. “These musicians performed in functions where alcohol was consumed, and they also traveled, which at that time was not an acceptable environment for women.”

This context created what became a male musical tradition, she added.

Pérez, who grew up in East Los Angeles, started playing mariachi music in 1973 and became a founding member of female group Mariachi Mujer 2000. “We know of at least one courageous woman, Rosa Quirino, who broke that rule of tradition, and in 1903, as a 13-year-old, joined an all-male mariachi,” she said. “Quirino eventually led her own group and was known to be tough, resilient, and to carry a gun to protect herself and members of her group if she needed to.” 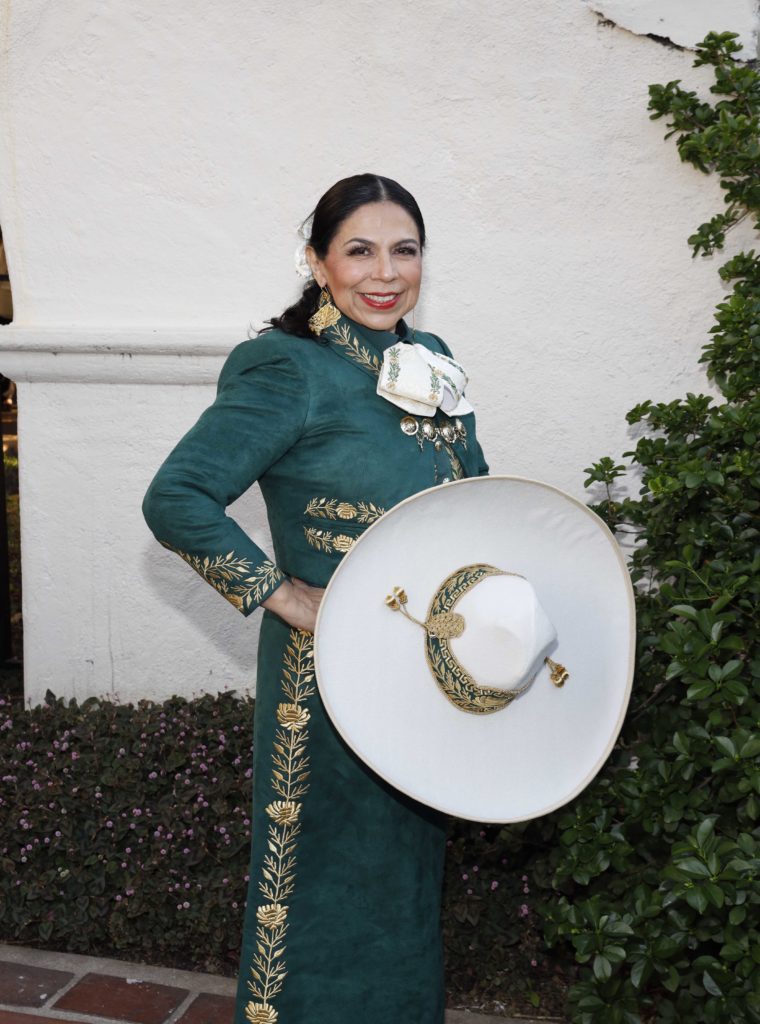 Later in the 20th century, a number of events would draw more women to mariachi in the U.S., starting with the Chicano Movement of the 1960s and “its focus on reclaiming and preserving cultural identity, roots and traditions encouraged youth, particularly college-aged Mexican Americans to listen to and perform mariachi music,” Pérez said.

The creation of ethnomusicology departments at colleges during the early ’60s would also see young women taking to the genre without being hindered by the male mariachi tradition. The Bilingual Education Act of 1968 then introduced multilingual and multicultural education, including Latino arts and culture, into elementary and high schools, attracting girls to mariachi without regard for whether they were raised with an appreciation for the genre.

While today’s all-women mariachi bands in Los Angeles may be united in their affinity for the music — especially the deep emotion and storytelling that comes with it — the way each woman came to be part of the tradition (and forging new ones) is different.

“Not all mariachi women are from the same background, ethnically, socially and culturally,” Pérez said. The genre’s appeal is truly global. In Southern California, some were born into Mexican households listening to the music or took mariachi classes as kids, while others not of Mexican descent were introduced to the genre as adults.

Some Mexican American women initially resisted mariachi altogether, such as 24-year-old Angelica Mata, whose parents have been performing in mariachi bands since they were teenagers. “My first sentence was ‘No maliachi,’ she said. “I didn’t like mariachi because when I was a kid, whenever I thought of mariachi, I thought, ‘My parents are going to leave me with my grandma and grandpa [to perform].’”

Angelica, her 22-year-old sister, America, and their mom, Esperanza Juarez, are all members of the Mariachi Conservatory All-Female Ensemble. They also teach at their family-run Mariachi Conservatory, a community-based music program founded in 2014 by Juarez and husband, Richard Mata, in the Boyle Heights neighborhood of Los Angeles.

“What transformed my thinking was when I went to go see my parents sing and perform mariachi for the first time as an audience member [when I was 12], not backstage or off to the side. I heard them singing a duet together, and that was the moment I told myself, ‘I need to learn how to play like this. I want to do that when I grow up.’” 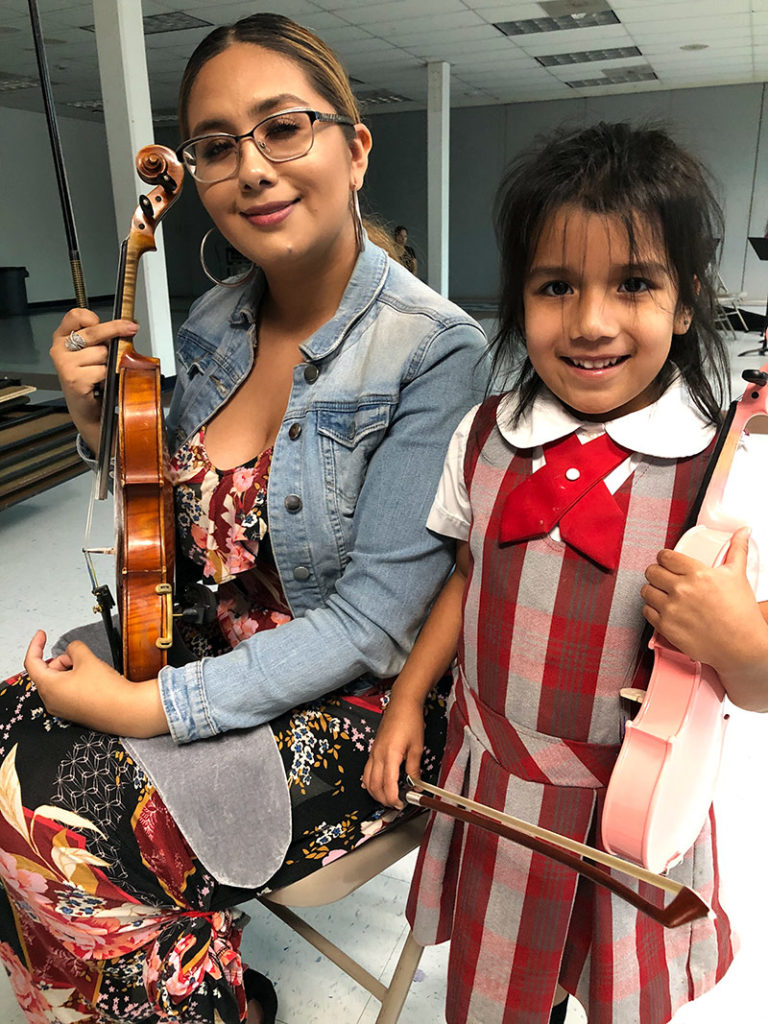 America Mata with a young student from her introduction to violin class. Photo courtesy of Richard Mata

The 11-member Mariachi Conservatory All-Female Ensemble ranges in age from 12 to 42. Mata plays the guitarrón (bass) in the group, which has performed at the International Women’s Mariachi Festival each year. Pérez was actually the catalyst for starting the ensemble when she inquired if the conservatory had an all-female group that could perform.

“It’s really beautiful to see these girls starting [in our conservatory] at age 8 and seeing them turn into these young women who are really empowering themselves through mariachi music and teaching the next generation,” America, a violinist and teacher in the group, said. “As someone who grew up not really seeing many female musicians especially in mariachi, it’s a surreal moment seeing that whole growth.”

At mariachi conferences and other educational events, Juarez sees a greater number of female students participating in mariachi classes than boys. “But there’s a large discrepancy between the women learning how to play an instrument and who gets to be in a professional group,” she added.

Among the reasons she believes women formed their own mariachi groups is because men did not consider the women as equals in the craft, or existing all-men bands may have thought that by adding women, it meant making additional allowances on the road, such as booking separate rooms.

“It’s that machismo that sometimes gets in the way of letting a lot of the women that are really, really good musicians be part of those groups,” Juarez said. “Consequently, there’s been a lot more women who have taken on the leadership role. The female groups are representing themselves differently and very uniquely within each group. None of the female groups are the same; everybody has their own uniqueness.” 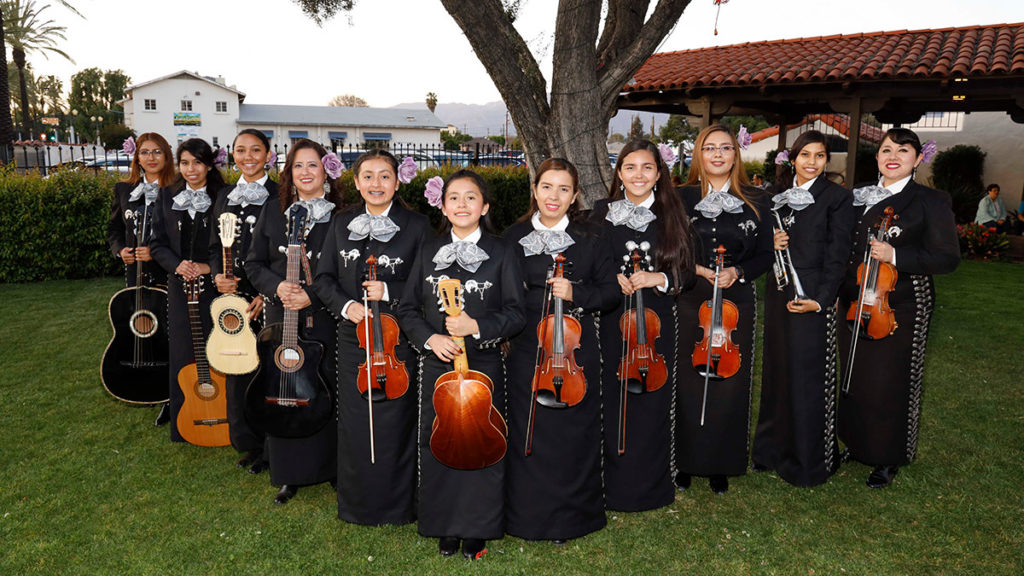 “From the beginning, we decided not to use a trumpet and revert back to the most traditional mariachi ensemble. Trumpets were not introduced in mariachi until the 1940s,” said founder Susie García, a violinist. “Our vocal abilities and harmonies became more interesting and started to stand out because we weren’t drowned out by the loud horn sound.”

García has been playing in all-women bands since 1997, starting with Mariachi Adelitas, followed by Mariachi Las Alondras and Mariachi Divas. In 2009, she formed Las Colibrí, which favors the early traditional composition of mariachi instruments rather than perform in the familiar traje de charro. Instead, group members opt for “something more feminine and festive,” letting each woman express themselves uniquely.“Each musician wears her own color, which I think adds a nice touch of individuality to the mariachi ensemble,” García said.

Mariachi Divas, founded in 1999 by Cindy Shea, is the most prolific female mariachi band in the country, having just released its 16th album, “Esta Distancia,” recorded during quarantine. Disney made them its official mariachi ensemble 17 years ago, with regular performances in recent years at Disney California Adventure Park and El Capitan Theatre. With a demanding performing schedule, Mariachi Divas does not have a set number of members, because the lineup has to be flexible for all the touring and events, such as quinceañeras and weddings, the group does. Shea likens the Divas as an “agency of divas” with members “always on rotation, so nobody ever gets bored.” Many of them have played (or play) with other female mariachi bands in the area, and earlier members also formed their own groups.

Before starting Divas, Shea was a member of Mariachi Las Alondras in the late ‘90s, which recruited her to play trumpet. Before that, she was part of salsa musician Yari More’s orchestra at age 18. The orchestra backed such icons as Celia Cruz. Shea is of Italian and Irish heritage but was exposed to many Latin music styles while studying music in Miami and remembers discovering many mariachi musicians were of different or mixed heritages: Mexican, Mexican American, Puerto Rican and Cuban. “And I wanted to celebrate that in Divas. I didn’t want a group that sounded like everybody else,” she said.

“I always thought that everybody’s individuality should be celebrated — instead of closing the door on me like many did because I was a gringa — I didn’t want to do that to others. To me, this music was beautiful, and I wanted to showcase the love everyone can have for it and to create new sounds,” which has garnered the group two Grammy Awards and a total of 11 nominations for Best Regional Mexican Music Album (including Tejano).

Pérez estimates there are around 25 all-female mariachi bands in the U.S. She sees this number growing “with more funding in training, programs and services” for girls and women. “and greater understanding of how the connections and skills developed in mariachi performance are a catalyst for greater social, economic and professional opportunity.” 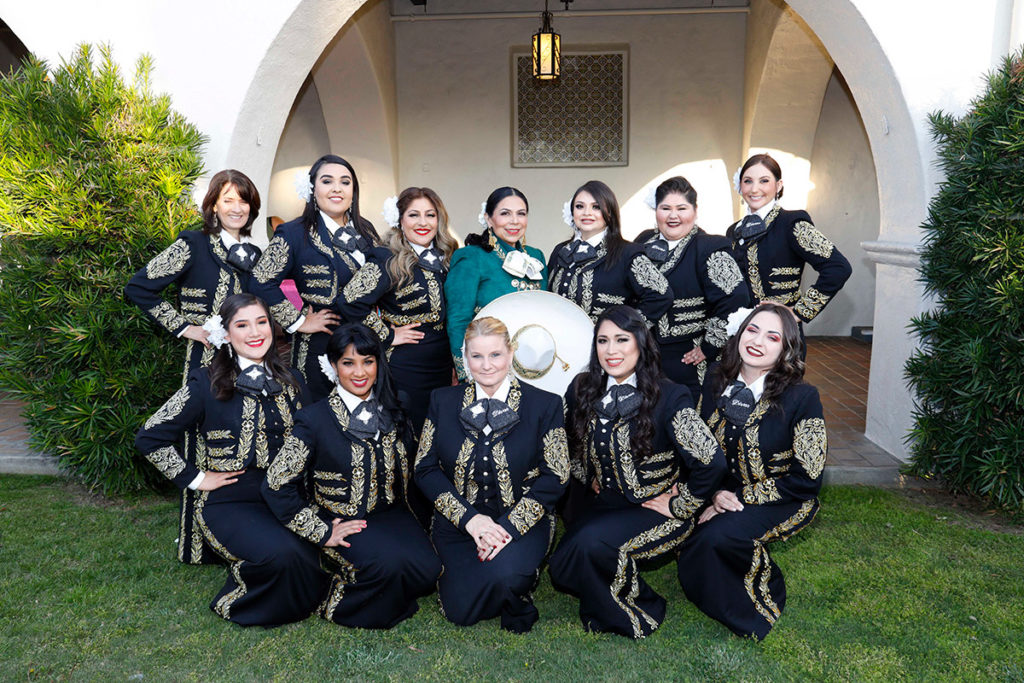 The Mata family of the Mariachi Conservatory agrees that funding is of utmost importance, especially in Los Angeles. “Going to mariachi conferences has really given me a different perspective of the L.A. mariachi scene versus Texas, Arizona and New Mexico. We see the difference not only in the level of a mariachi musician compared to someone in Vegas, as a prime example,” Angelica said. “They have everything they need, including budgets for conferences where they can meet one-on-one with these masters from Mexico. They have that access, while someone from L.A. has to travel and have that expense.”

This makes her family even more determined to preserve mariachi’s legacy, especially for young girls.“I see that because we are so passionate, we’re very much resilient when it comes down to mariachi music,” she said. “So we feel the responsibility of learning from whomever we can and bringing that back to our community.”