Deon Jones suffered two fractured bones in the back of his cheek and below his temple after police hit him with batons and shot him with rubber bullets. Photos by Shayan Asgharnia
Arts & Culture KCET California

Editor’s note: Images below show graphic injuries that may be disturbing to readers.

Los Angeles — When you scroll through Shayan Asgharnia’s Instagram account, you’ll find striking portraits of Hollywood stars and political luminaries, from Lupita Nyong’o and Nicole Kidman to Los Angeles Mayor Eric Garcetti. However, juxtaposed with those images are recent pictures of Black Lives Matter protesters, still healing from wounds on their faces, appendages and torsos.

As an ongoing personal project, Asgharnia, 30, an L.A.-based commercial and editorial photographer, has been documenting the injuries that peaceful demonstrators have sustained from the hands of police officers. He’s been telling their sobering yet hopeful stories about protesting while facing police brutality to his 16,000-plus followers on the social media platform.

In one image, a close-up of Deon Jones’ face reveals scars on his right cheekbone. Jones said he suffered two fractured bones in the back of his cheek and below his temple when a police officer hit him with a baton at a May protest at Pan Pacific Park in the Fairfax District. In the photo, he’s donning the denim cap he was wearing that day, which is now stained with dried blood.

In Asgharnia’s caption of the image, he quoted Jones as saying: “There are two times in my life where I thought I was going to die. The first was during swimming lessons when I was a child. The second was … when I was beat with a baton by the LAPD and shot in the face with a rubber bullet by one of their officers while protesting peacefully for the right for Black folks to live.” 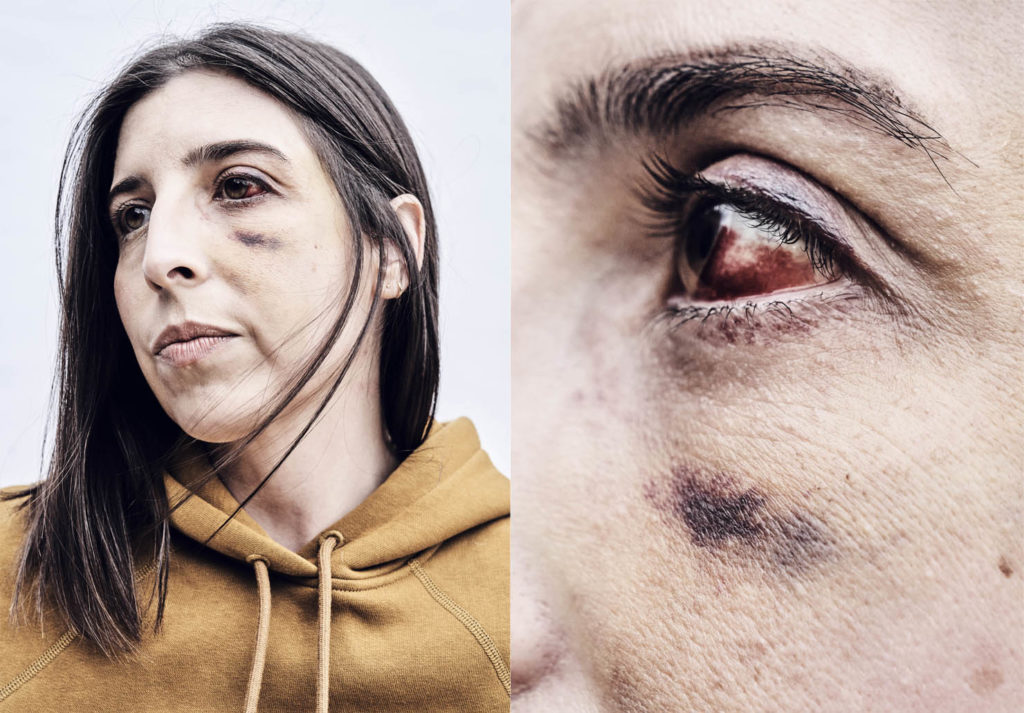 Rachel was shot with a rubber bullet to the head (left) during the Black Lives Matter rally off Fairfax/Melrose near CBS Studios. In the right photo, Rachel’s bloody eye is shown in detail. Photos by Shayan Asgharnia

Asgharnia was at that same demonstration, which began as a peaceful protest and later became violent as it spilled out of the park and into the Fairfax District and surrounding neighborhoods. He described the protest as “one of the most brutal ones in L.A. during this uprising.”

Tensions between protesters and police officers escalated during the demonstrations that day. Officers shot rubber bullets and tear gas into the crowds and brandished their batons. Several LAPD cruisers and shops were set on fire and vandalized. Protesters have said that the people inciting violence were not associated with Black Lives Matter movement.

In a June 11 article, Los Angeles Times staff reported their review of dozens of accounts of people who have been protesting the death of George Floyd, a Minneapolis Black man who was killed when a police officer kneeled on his neck for nearly nine minutes. They found that LAPD’s use of weapons had appeared to violate department policies, and some protesters were seriously injured. Even LAPD Chief Michel Moore said he didn’t approve of how some officers used their batons. 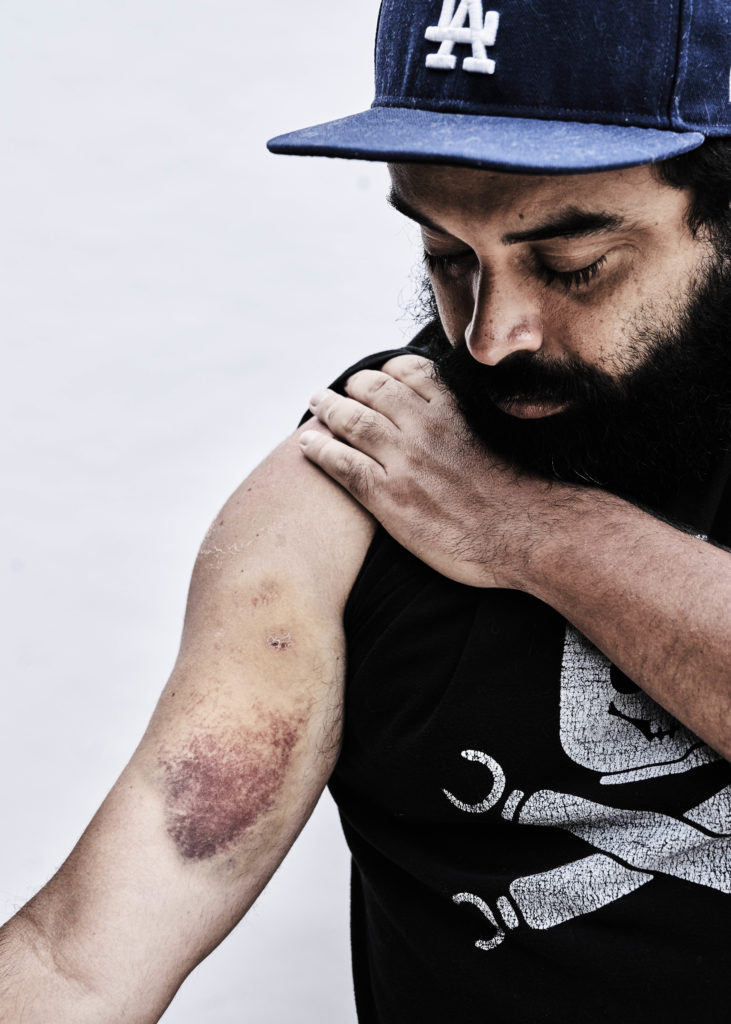 Daniel Chavez was shot in the arm and in the back of the head while filming LA County sheriffs deputies launch tear gas at peaceful protesters. The rubber bullet to his head hit the rim of his cap. Photo by Shayan Asgharnia

The idea for this photo project came to Asgharnia shortly after that Pan Pacific Park protest. He found his subjects through social media and asked his activist friends to share what he was doing with others. He wanted to contribute to the Black Lives Matter movement by bringing awareness to police brutality at these protests through his lenses.

Asgharnia, who is Iranian American, said he is adamant about representing a diverse group of protesters throughout his documentation. Some of the non-Black protesters who had agreed to have Asgharnia take their portraits were hesitant to do so at first for the same reasons.

Asgharnia said one Latina protester was worried that her photo would distract from the Black Lives Matter cause because she is white-presenting. Asgharnia said the woman needed reassurance that he would photograph a diverse group of people and not make martyrs out of protesters who are not BIPOC (Black, Indigenous, People of Color).

At the same time, Asgharnia said, picturing white subjects participating in protests is documenting allyship. “It’s essential that they are part of the narrative now,” added Asgharnia, “I think it’s vital that their voices and their faces and wounds are also shared with the general public.”

In another image, Trish Hill, who was also at that Pan Pacific Park protest, has stitches alongside her nose. She told Asgharnia that after calmly putting her hands up in the air when police arrived, she was shot in the face with a rubber bullet. Her nose was bashed under her right eye. 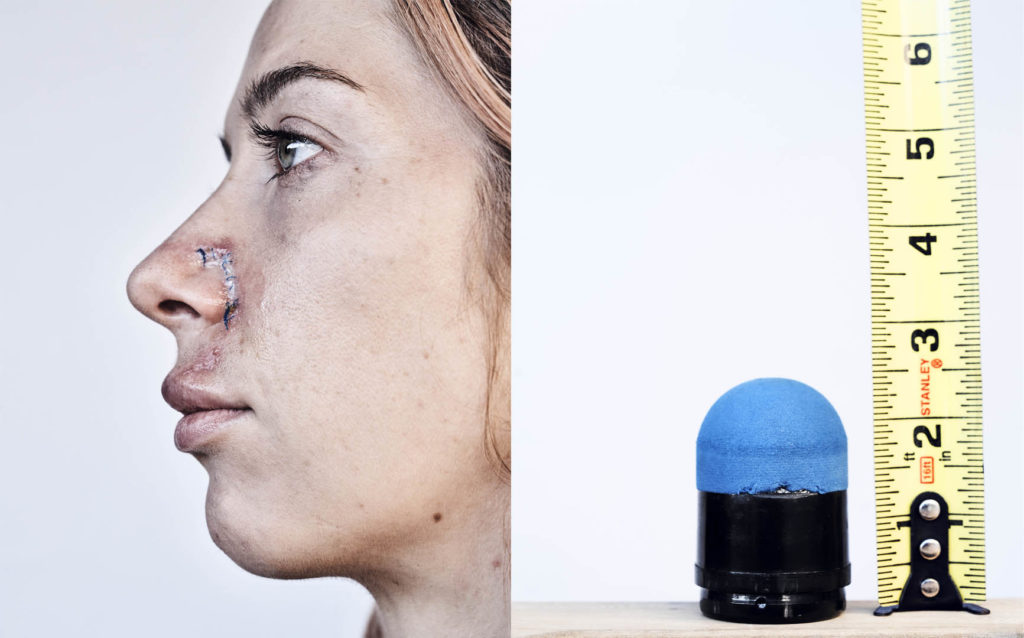 Trish Hill, who had her hands up in the air, had to get stitches on her nose after police shot her in the face with a rubber bullet. A 2.5-inch rubber bullet (right) like the one that hit Hill on her face. Photos by Shayan Asgharnia

In addition to Asgharnia’s portraits of these protesters, he also includes in his posts photos taken by the demonstrators of their own injuries right after the incidents occurred. Hill’s accompanying photos at the hospital are graphic and bloody.

Asgharnia quoted Hill as saying, “If I could do it all over again, I’d still be out there putting myself peaceably between the police and Black protesters. Hell, I even bought a face shield so I can go out again on Pride because I will not be silenced. I can say proudly that my community is behind me, that more and more people I know have been inspired since to find their own activism.”

So far, Asgharnia has been taking photographs of protesters at his home, but he’s also more than willing to shoot them at the subject’s residence. Since he isn’t flying during the pandemic, he’s also offering portraits of protesters done through FaceTime for people outside of Los Angeles. He talked about how this is a new trend in photography, as when Collier Schorr recently took a photo of musician Janelle Monáe through the Zoom video conferencing app for the cover of Vanity Fair.

Asgharnia often relates what’s happening in the U.S. to what has happened in the country where he was born. His family left Iran when he was just over a year old in 1990 and immigrated to Dallas.

“I think [about] how lucky I am that I have parents who decided to move from that country and bring me to suburban Texas, where I could live pretty freely and be able to express my opinions without fear of imprisonment,” Asgharnia said. “That’s why I think it’s important to fight for that right now because I don’t want to be in a country where I can’t voice my opinions, where I can’t talk to you right now without fear of having somebody show up and put me away, which is what would happen in Iran.”

Related Content
Music
How the soundtrack to today’s protests against racism has roots in the blues
Arts & Culture
On Broadway, Black artists push for racial equity
Arts & Culture Twin Cities PBS Minnesota
This Minnesota project is building a map of every George Floyd mural in the world
Arts & Culture
In zines, LGBTQ creators find a place to tell their own stories
Top Stories
Film & TV
Pandemic eats into LGBTQ representation on network TV, study shows