How this zine creates a skating world ‘where everyone feels welcome’

PORTLAND, Ore. — Amelia Bjesse-Puffin picked up her first skateboard late in life — at age 29. And she never put it down.

“I love the sensation of skating. I love dropping in and I love skating really high. It’s just the best” she told Oregon Art Beat.

But as one of the few women in the skate park, she ran into a lot of sexism. In response, she created a zine that celebrated women skaters. Two years ago, she expanded her mission, creating a separate zine that tackles all forms of oppression. “Smash the Skatriarchy” is a submission-focused zine that aims to lower barriers to skating, she said.

For her latest issue, Bjesse-Puffin met up with roller derby stars Mick Rose, Gloria Big Back and Eden Hakala at Pier Park Skatepark in Portland, Oregon, for a day of skating, interviews and photos sessions. These Indigenous skaters are working to decolonize the world of derby – a goal that Amelia wants to elevate in “Smash the Skatriarchy.” 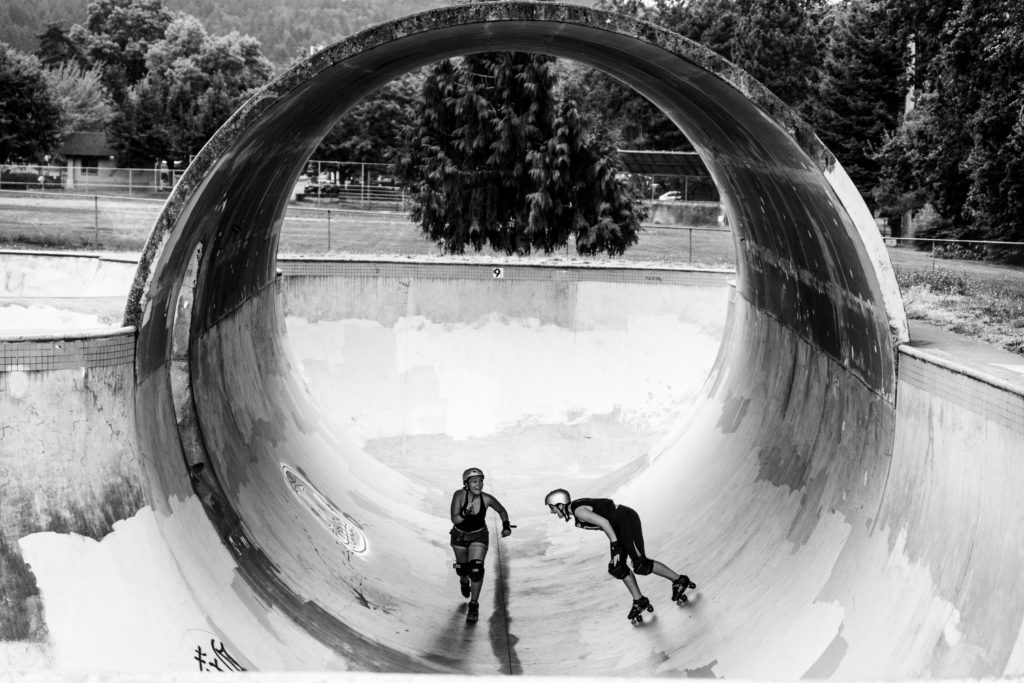 Rose is a co-founder of Team Indigenous, a borderless roller derby team made up of Indigenous skaters from different parts of the world. Most roller derby teams are associated with a country (like Team USA) – a concept that didn’t work for Rose, and many others.

“I love skating fast,” said Big Back, co-founder of Team Indigenous Youth. “It’s a really good feeling. Like, it just makes me feel safe.” But for Big Back, skating has a much bigger purpose. “I skate for missing and murdered Indigenous women. I’m a Native young woman. Native women go missing and are murdered all the time and they don’t get enough recognition. ‘No more stolen sisters’ basically is what I’m trying to say when I skate for them.”

For this issue of Smash the Skatriarchy, Bjesse-Puffin teamed up with Mika Martinez, a Portland photographer with a history of taking photos of derby skaters. To create authentic portraits, Martinez gets personal, engaging in deep conversations before ever shooting a frame.

“When I got an opportunity to talk to the skaters before today’s session, we talked about what does it mean to be an Indigenous skater in roller derby? How do you want to be seen and represented? And we talked quite a bit about some of the stereotypes that are associated with Native Americans and how we wanted to avoid that,” Martinez said.

On a foldout table on her back porch, Bjesse-Puffin carefully combined highlights of her interviews and a handful of Martinez’s best photos into this new issue of “Smash the Skatriarchy.” With the photocopied, collated and stapled issues in hand, Bjesse-Puffin liked what she saw.

“I feel pretty good about this edition. I’m proud to put it in the world, proud to have it out there,” she said.

Sitting on her porch, clouds above threatening rain, Bjesse-Puffin talked about wanting to create a skating world “where everyone feels welcome.”

“I think it’s super empowering to be able to move on your own wheels and especially like a skateboard or roller skates that you can just pick up and go,” she said. “And the fact that we have this culture that has created barriers to accessing that – I understand how it happened and its time is over. It needs to change.”