CLEVELAND — Lauren Yeager works with found objects. They are mostly items people toss to the curb, but she gives things like old booster seats and plastic coolers new life as sculptures.

“To try to add value back to the item is like a way of recovering it,” Yeager said. “In Cleveland, like everything that’s on the curb is going to a landfill right now.”


Listen to ideastream’s story above.

On a recent afternoon at her studio, the Cleveland Institute of Art alumna stacked together old plastic planters and boxes.

Yeager said she moves around pieces until she likes the way they come together or they begin to take the shape of classical or modern sculptures.

Many of the pieces Yeager works with are made of plastic — a material she said is quite prevalent on street curbs. 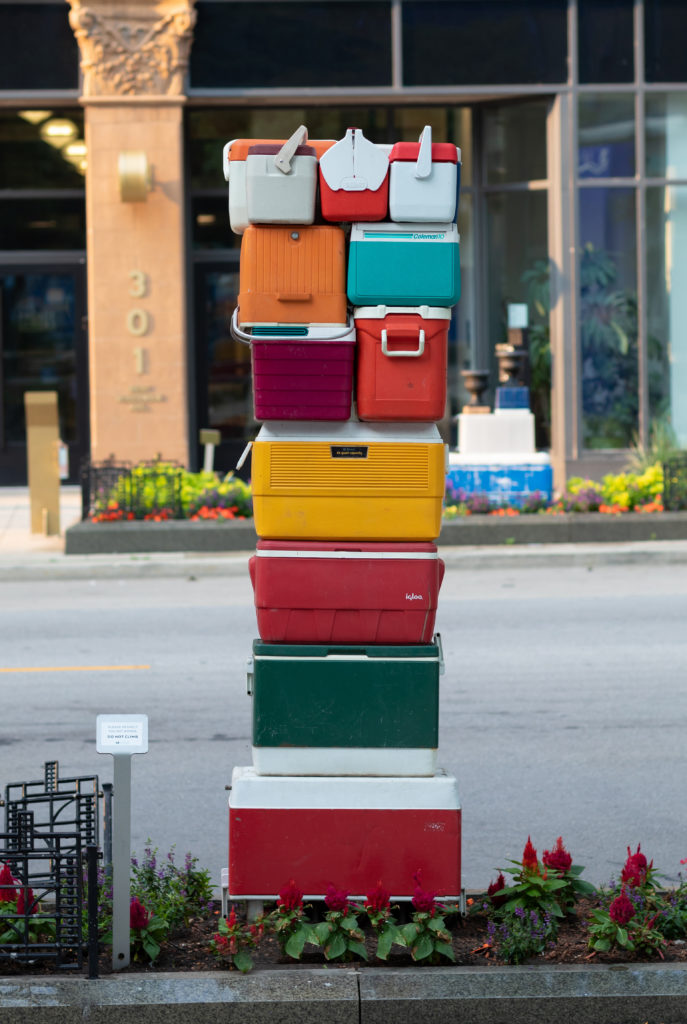 Lauren Yeager’s “Cooler Tower,” (2021), which is made from found objects. Photo by Meg Strobel/Sculpture Milwaukee

“These objects, specifically the plastic ones, are going to last for thousands of years,” she said, adding that by repurposing them she can give them a new use, even if temporary.

Yeager is one of two visual artists receiving a Cleveland Arts Prize this year. Corrie Slawson takes the other honor. While they work in different mediums, both artists inspire a more critical look at what people trash and what they treasure.

“Who gets to enjoy a nice environment, who gets to ruin it? And who ends up paying the price for that?” Slawson said.

Slawson said she began exploring questions like these through her art while she was pursuing her master’s degree at Kent State, where she also now teaches. Inside her Cleveland Heights studio, she works in mixed-media, creating collages that fuse together different symbols blended through her printmaking, drawing and painting.

“I have many, many, tens of almost hundreds of collages that I built using a combination of internet, National [Geographic magazines]… photos of animals, photos of endangered species,” she said.

Those photos made their way into her recent series, “Endangered,” where she combined images of animals, threatened or extinct, with luxuries like diamond jewelry.

“These things look so beautiful in the way that they present as part of the paintings or as part of the collages. But they’re doing some major harm,” she said.

Her artistic process helps her process what’s happening in the news and culture in general, she said. And it’s through that practice that she makes the connections that show up in her artwork.

“They’re not necessarily connections everyone would see when they see the work. But they’re definitely something that I’ve thought about each element that goes in there,” Slawson said.