How a Kansas City theater became a fixture for Latino cinema

Salsa music pulses in the background as owner Yosmel Serrano, a proud native of Camaguey, Cuba, flashes a grin and strikes up conversation about music. He’s specifically eager to discuss Cuban salsa.

“La soltura, la liberta’ en la salsa Cubana es evidente. Hay mucho más movimiento,” he said, noting how the agility and liberty found in Cuban salsa are evident. There’s a lot more movement, he added. As an example, he shows how a particular movement — pushing his shoulders forward and back, arms half bent and palms up — hails from rumba, and how that was mixed in with Cuban salsa.

Serrano beams with pride for his culture. His theater is named after “The Jungle of Clocks,” a poem by the Spanish poet Federico García Lorca.

By day, Serrano works as an electrician. And by night, he runs Selva de los Relojes, the only Latino theater of its kind nestled in Kansas City’s historic northeast area.

This theater, which opened in May 2019, only shows Spanish-language films. Serrano explains that opening an independent theater in the northeast neighborhood was a deliberate decision. The area‘s population is majority Hispanic but he wants to also attract non-Latinos who want to learn more about Latino cinema.

Inside, through two small curtains, the theater seats 30 people. The chairs are also removable. Serrano said he envisions using the space to host salsa dance lessons in addition to screening movies, when people are able to safely gather again. 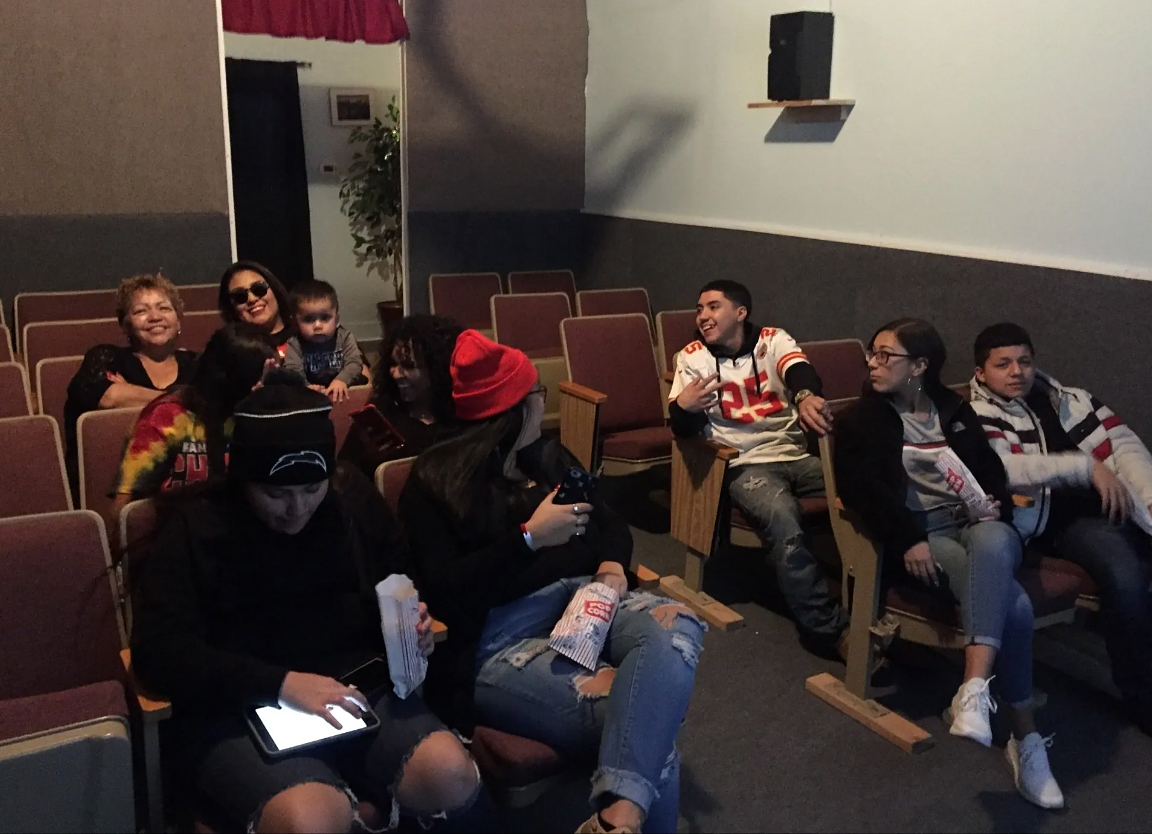 Yosmel Serrano sees his business as a way to educate the Kansas City community about Spanish-language films. This photo was taken before the coronavirus pandemic hit. Photo courtesy of Yosmel Serrano

The COVID-19 pandemic hit in March 2020, the same month he had planned to begin hosting events, so he’s had to rethink how to connect people with his carefully curated films.

For Serrano, his theater not only provides film education, but also a place to build community. As someone who’s moved around quite a bit in his life, he thrives on connecting with the people around him.

That’s how he got to Kansas City.

A Cop, A Dog and Cup of Yogurt

When Serrano left Cuba in 2010, he knew he wouldn’t return. The capital city of Havana was crumbling and his dreams of being a filmmaker would be impossible to make a reality. So he moved 90 miles away to Miami.

“Cuando yo venía en el avión,y empieza a ver la ciudad, yo casi pensaba que mi hiban virao pa’tra,” he says, chuckling. “When I was in the plane, I began to see the city and almost thought we’d turned back around.”

Houses in Miami were influenced by the Cuban migration in 1959, which is why Serrano felt as though he’d returned home. He settled in and prepared to study film production and cinematography at Miami Dade College. 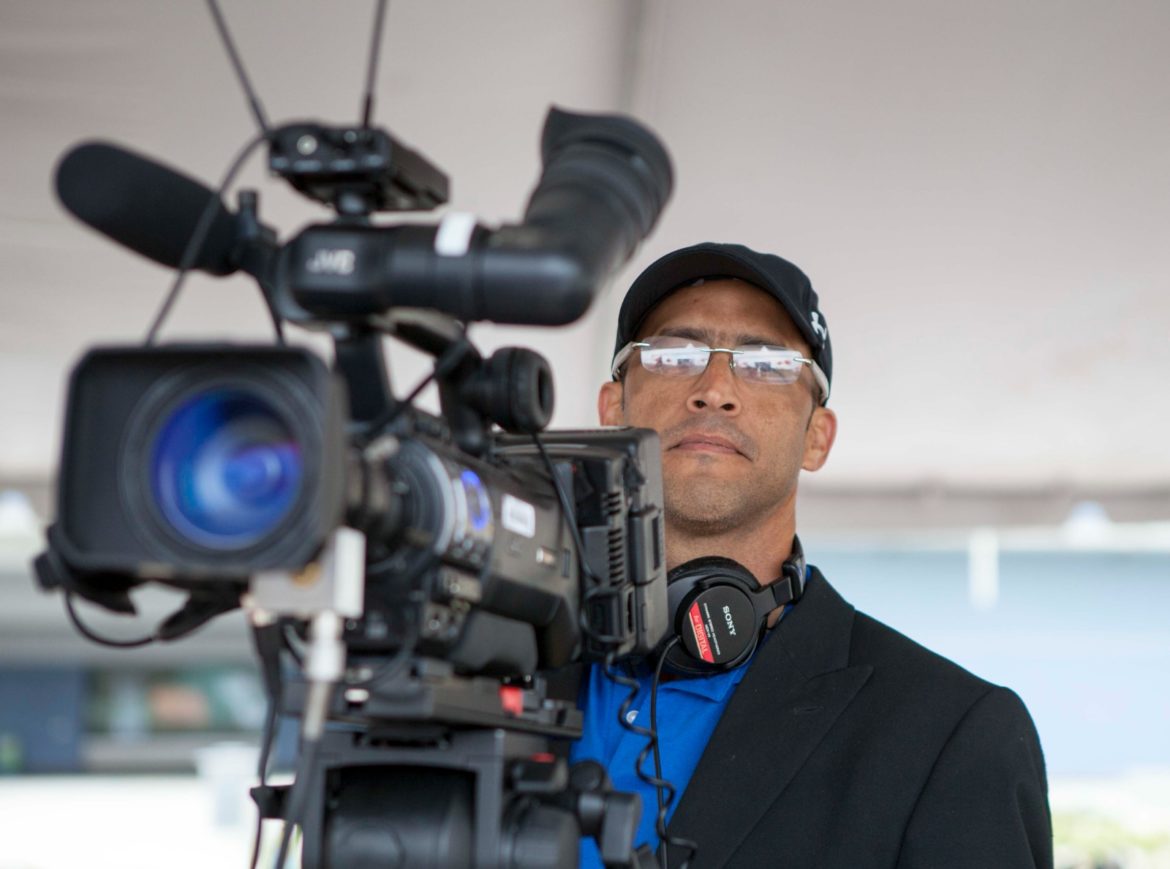 Yosmel Cerrano turned a degree in film into a business. Photo courtesy of Yosmel Serrano

But the city didn’t feel like home. A warm and amiable person, Serrano says Miami felt more like a transient place. Classmates didn’t stick around to discuss the material like his classmates from Cuba would. Life in the U.S., particularly Miami, was different.

During the holidays one year, he took a road trip to visit friends in Houston and the Kansas City area. That’s when his life changed forever. A one-week stop in the Midwest turned into a months-long stay.

Ironically, the moment he knew he wanted to stay was a run-in with Missouri policemen.

He had been stopped at around 2 a.m. for failure to signal a turn. But Serrano recalls he’d swerved because he didn’t know where he was going, thanks to a GPS glitch.

The police asked to check his car with their K-9 detection dogs.

He had nothing to hide and obliged. During the search, Serrano and one of the police officers chatted about life, and he quickly learned that the man also spoke Spanish. But then the dogs barked.

The dogs only alert when they detect marijuana or cocaine, the officer explained. So they pressed Serrano again and asked if he had anything hidden in the car.

Serrano, slightly in jest, explained he’d driven from Florida to Texas and then to Missouri. That’s a long road trip that requires a few snacks.

“Mire, ahí lo que se encontró fue yogurt,” Serrano told the police, chuckling as he reminisced. Serrano said the dog had found an old yogurt cup in the car door so he barked because he was hungry. Sure enough, the empty cup was there so the police conceded and let him go.

The experience inspired the Miami-based filmmaker to move to the Midwest in late 2017. But why?

“Aqui la gente converse,” he says. People talk here, Serrano said, and that conversation with the officer was the nudge that he needed.

So he moved and created a space that showcases Latino films for everyone in the metro area. Not only does his theater provide Spanish-language films for Latinos and Hispanics in the area, but it also provides education about the Latino culture through film to other communities in Kansas City. It seeks to bridge misunderstanding and connect people through art.

Oftentimes, his patrons stick around to discuss the movies. Serrano misses that most, but while the theater is closed he will begin renovations and reimagining his concessions.

“Esperamos que no haya complicaciones adicionales,” he said. Hopefully, there aren’t any more complications with the pandemic.

Serrano hopes that someday soon he and his patrons can reconvene, watch unseen movies, snack on free popcorn and sip on his café cubano, an in-house staple.

Because of restrictions for indoor gatherings, La Selva De Los Relojes now offers movies for rent and online streaming for a select group of Spanish-language films.