KANSAS CITY, Mo. — Angel Otero routinely punctuates his sentences with the words “It’s dope” and a chuckle. The 38-year-old artist from Santurce, Puerto Rico, is larger than life, but his 14-by-14-foot, mixed-media installation “Diario” at the Kemper Museum of Contemporary Art is even larger — his biggest work to date.

Taking cues from artists such as Jackson Pollock, Otero said his nouveau abstract expressionism is “organically moved … following these intuitions of what to do and what to not do.”

Called “Diario,” Otero’s piece “felt like it was the next chapter of someone’s diary,” said Erin Dziedzic, the director of curatorial affairs at the Kemper Museum who helped the artist choose the title. 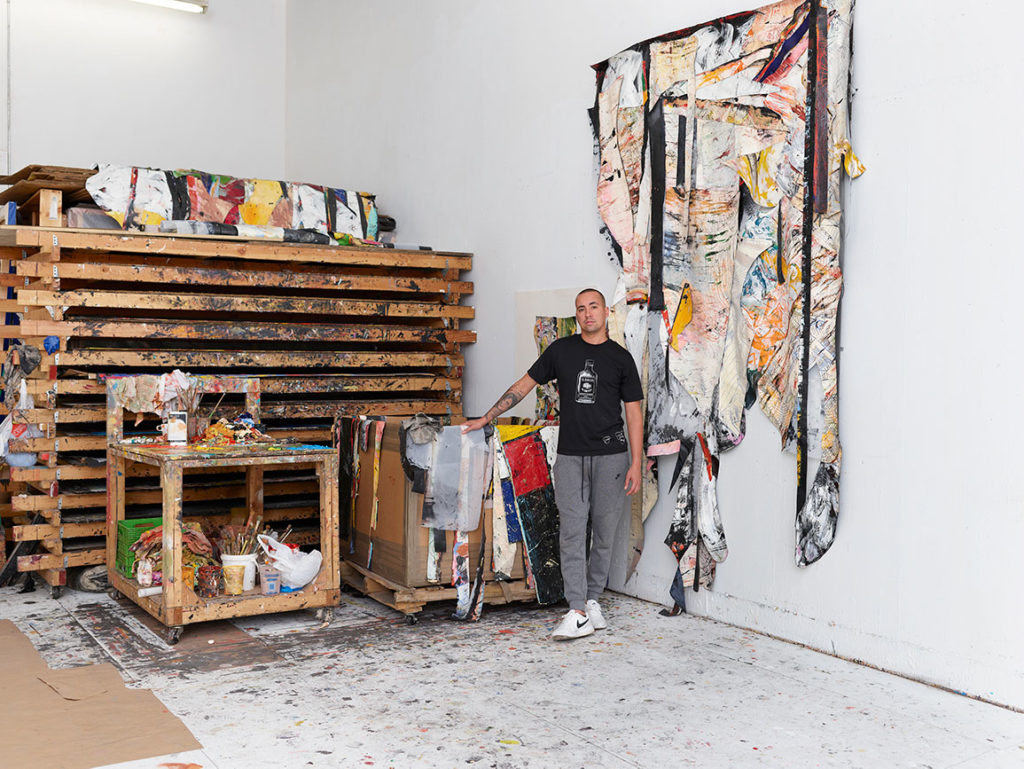 Angel Otero is known for reusing scraps of his older works – seen in the bin next to him – to create new compositions. Photo by Elisabeth Bernstein

The site-specific work is the fourth in the museum’s Atrium Project series curated by Dziedzic. The series’ aim is to highlight artists’ connections to the Kansas City metro area through a commissioned work at the museum entrance. It’s the first and last thing you see there.

Otero’s newest body of work, including “Diario,” is partly autobiographical, fueled by nostalgia and connection to family – in particular his grandmother. 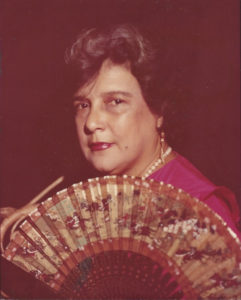 Angel Otero used this portrait of his grandmother for the tattoo on his forearm. Photo provided by Angel Otero Studio

“I’m a … grandma boy,” he said, flashing a grin. Then he laid his right arm on the table to reveal a tattooed portrait of her on his forearm.

“She was the only one who was a really big fan of me painting,” he said. “Everyone freaked out except my grandma.”

She died four years ago, and Otero held onto some of her trinkets. Because of his grandmother, Otero believes objects hold power, which is part of the reason why he’s recycled his old works and combined them with antiques.

For nearly a year, Otero collected antiques from the Kansas City area that reminded him of his grandma’s house in Puerto Rico. He grew up in Ocean Park on Calle Loiza, one of the most popular streets in Santurce. As a child, he was fascinated with old and distressed objects, like tangible links to history.

Elements of home — “like weird dining tables, weird flower pots, puzzles” — have been represented in his art before, but not like this. This time, he took scrapped pieces of his old paintings and began to patch those together and then filled holes with antiques. The result was a physical representation of memory fragments – flashes of childhood games and kitschy home decor.

“If you were to say, ‘I’m going to write a memory,’ you can never really put it the right way it was,” Otero said. “You have the right feeling, but … there’s all these interesting gaps as we grow.”

Angel Otero’s grandmother has been a motivating force for him since he was a child. Photos provided by Angel Otero Studios

“Always wanted to do that”

Otero started off at the University of Puerto Rico. But when he was in his early 20s, his father brought him to take a test for aspiring insurance agents. That career wasn’t what he wanted, but it was a job, and he took it. He earned money, had the house, the car, but he wanted more.

“Seeing books, and artist in their lofts in New York, and I was like, ‘I always wanted to do that’,” he says.

One day, an alumnus from the School of the Arts Institute of Chicago saw his work and wrote a letter to the school about “the kid who dropped out and had a portfolio.” The Arts Institute offered Otero a scholarship and, in 2003, he left Puerto Rico for the Midwest.

“It was quite a cultural shock. I was all alone. I had no friends, no family – no nothing,” Otero said.

But almost 20 years later, the artist has become known for his experimental methods and kinetic works. He even developed a process while at the School of the Arts Institute of Chicago that consists of dried, crinkled oil paint laid over canvas. He calls the texture “oil skins,” which is dried-up oil paint, and scraped-off pieces of glass placed on canvas.

Through incorporating this process with found objects, Otero said, “I have learned slowly that my work is definitely about me, my relationship to family and relationship to history.”

Otero’s mixed-media painting “Diario” is at the Kemper Museum of Contemporary Art and will be on display until July 19, 2020.