HOUSTON — Norman Rockwell’s name was already synonymous with the warm depictions of American life on the covers of “The Saturday Evening Post” when he decided he wanted to help out the war effort. 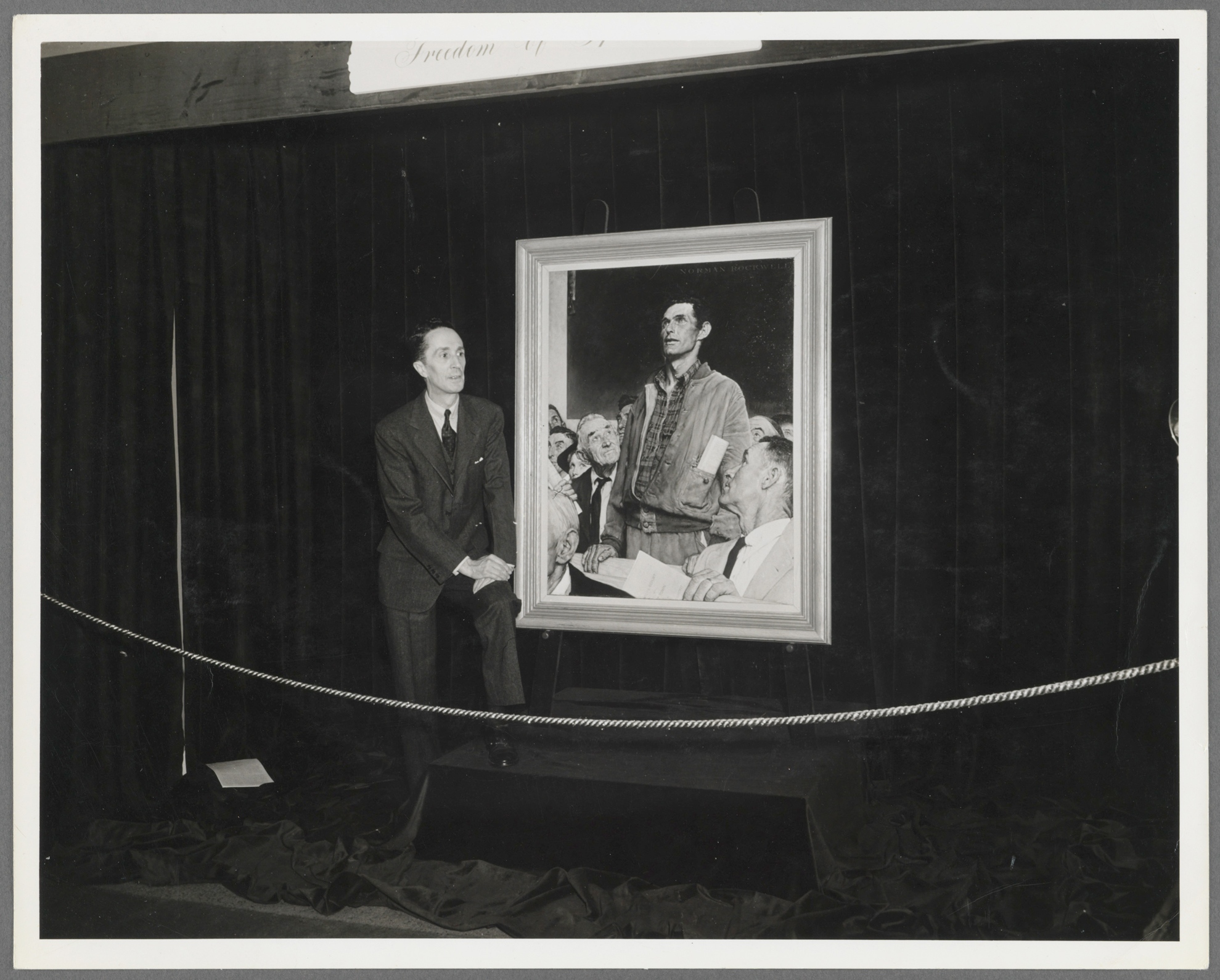 Rockwell visualized “Freedom of Speech” as a man in work clothes, standing up in a crowd at a community meeting. That first painting, along with three others based on FDR’s “Four Freedoms,” were published in the Post in 1943 and then traveled in a nationwide exhibit that reframed the president’s words in a way that resonated with Americans. That exhibit is said to have helped the U.S. raise more than $130 million in war bonds. 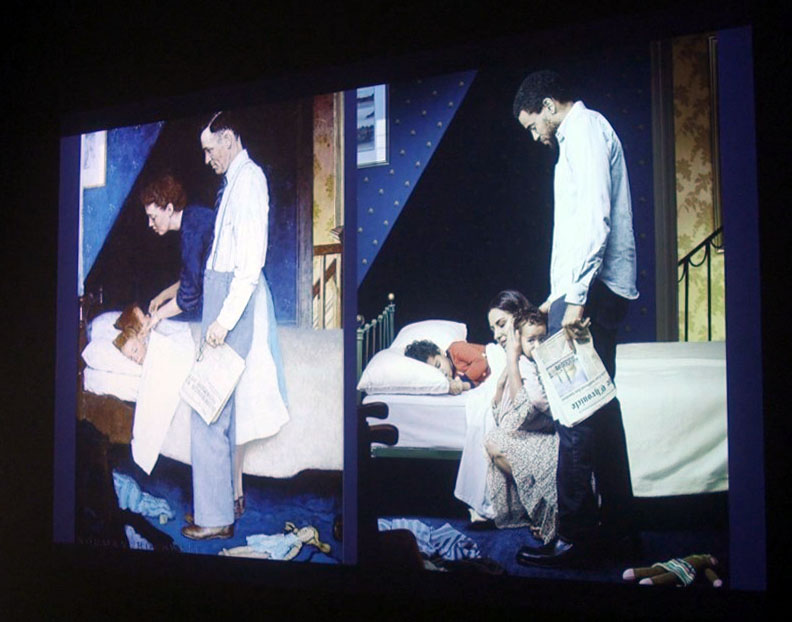 On the left is Norman Rockwell’s “Freedom From Fear.” On the right is a modern take on Rockwell’s painting by Hank Willis Thomas and Emily Shur. Image by Matthew Brawley/Houston Public Media

Today, the “Norman Rockwell: American Freedom” exhibit at the Museum of Fine Arts Houston (MFAH) again features his “Four Freedoms,” alongside more modern, photographic interpretations of Rockwell’s paintings. While paying homage to his familiar composition and lighting, these new portraits feature diverse subjects and 21st century visual cues. In the modern take on “Freedom From Fear,” there is an updated headline on the newspaper the father holds which references turmoil in the Middle East.

Rockwell’s civil rights-era masterpiece “The Problem We All Live With,” also appears in the exhibit. The 1964 painting depicts a 6-year-old Ruby Bridges walking to an all-white school amid New Orleans’ 1960 desegregation crisis. 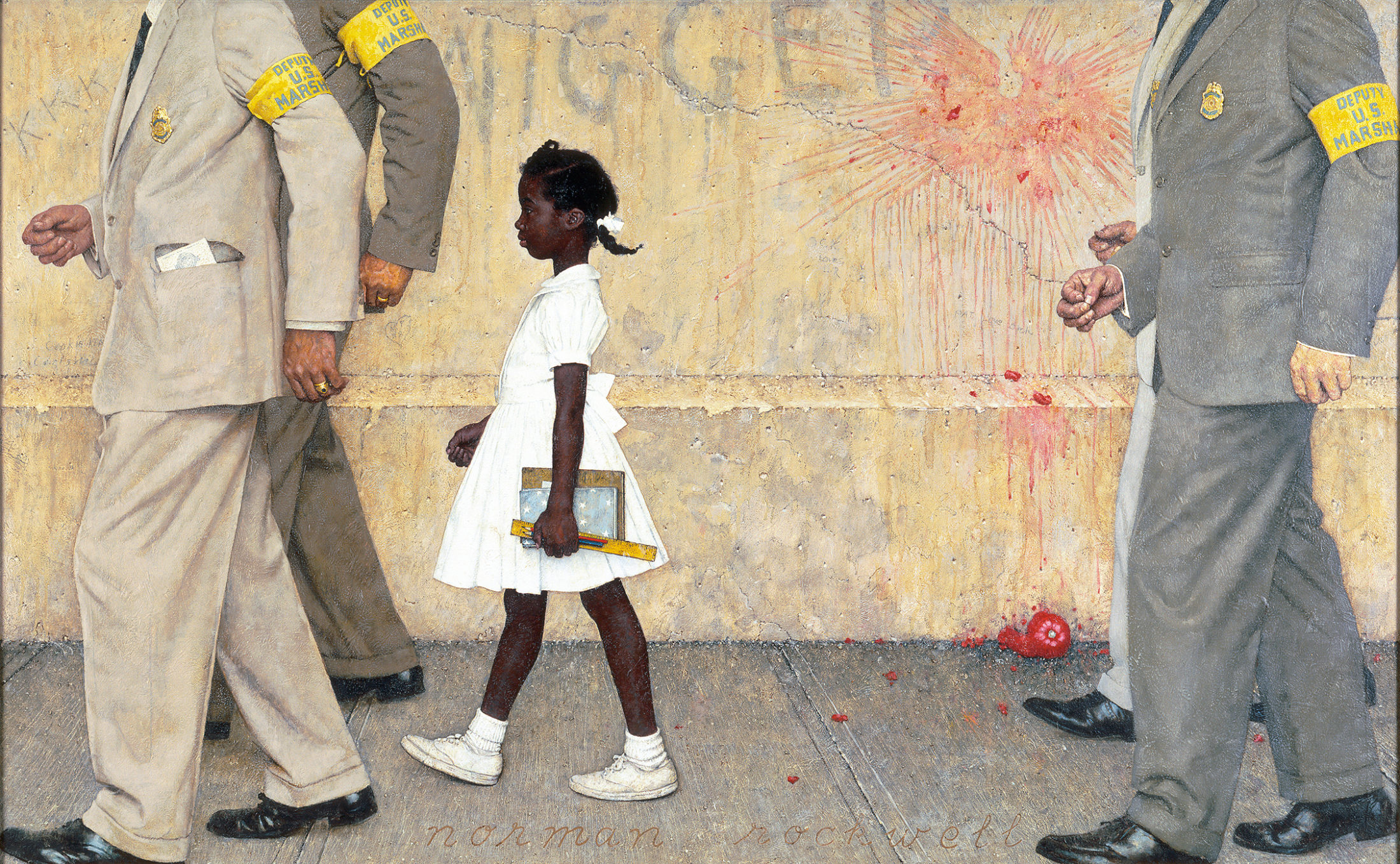 Rockwell’s “The Problem We All Live With” (1963). Photo courtesy of the Norman Rockwell Museum and Museum of Fine Arts, Houston

While many Americans may be familiar with Rockwell through reproductions of his work, curator Kaylin H. Weber told Houston Public Media that seeing these paintings in person is a powerful experience that sheds new light on both the artist and his art.
“When you see these works in person, you get a much greater sense of him as a master technician, as a wonderful draftsman and as a storyteller,” she said.

“Norman Rockwell: American Freedom” will be on display at MFAH until March 22.

The lighting memorial ceremony is scheduled to begin at 5:30 p.m. ET today. Watch the event here.