SOUTH BRISTOL, Maine — Ice harvesting was a thriving industry in the 19th century, employing tens of thousands of workers in New England alone. Big blocks of ice were removed with jagged-toothed saws from frozen rivers, lakes and ponds, packed in sawdust, and shipped around the world.

Having access to ice year-round changed the way people kept and ate food. Then came the advent of electric refrigeration. Cutting natural ice by hand became virtually obsolete. But there are still a few places where the tradition is carried on, like in South Bristol, Maine. 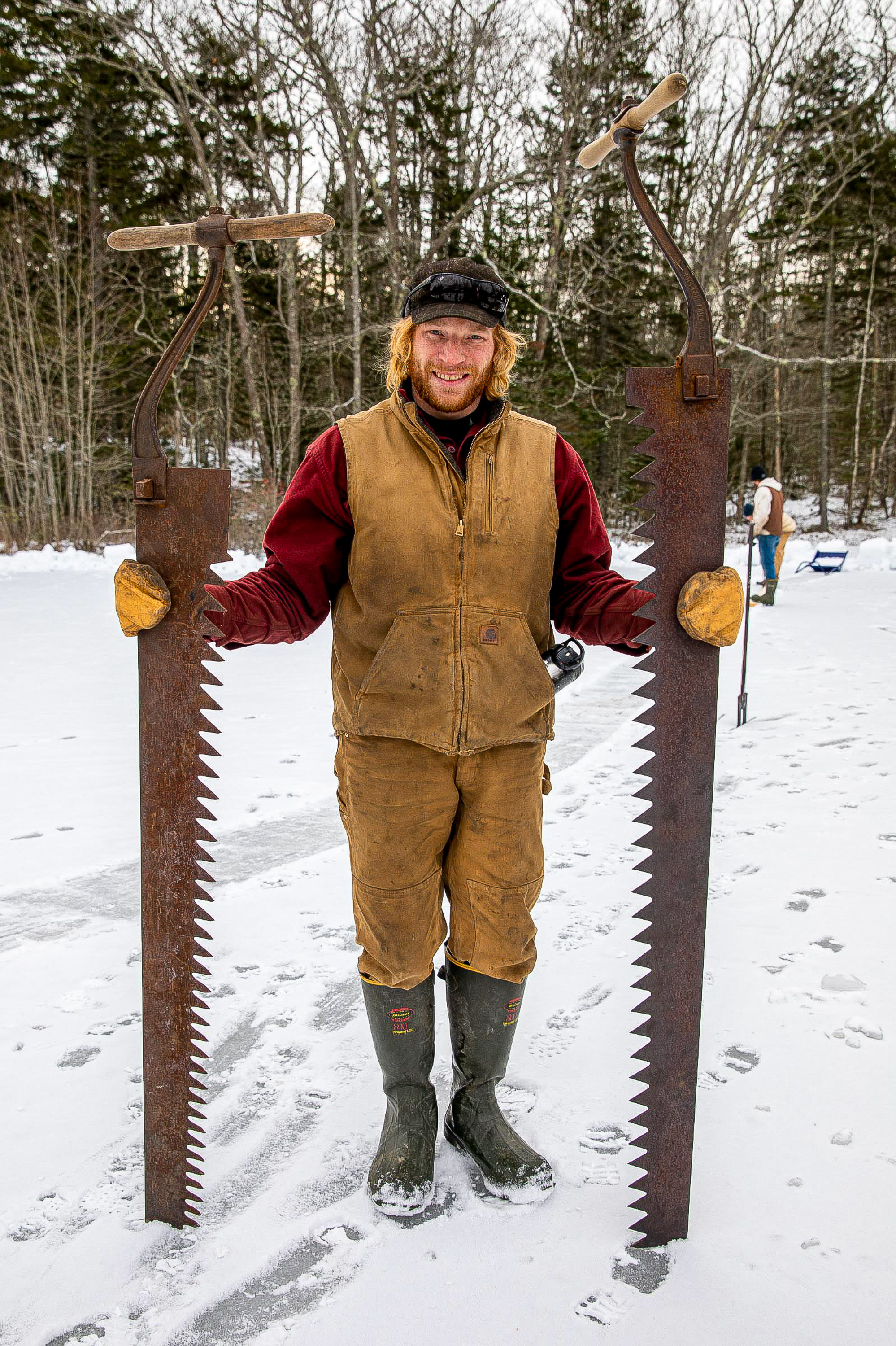 Every Presidents’ Day weekend, hundreds of people from the coastal community and beyond turn out for an old-fashioned ice harvest. It takes place on a small pond framed by tall trees and a rustic barn. Ken Lincoln, his brother Todd, and several other men rise early in the morning to do what they learned more than 40 years ago as kids — lay out the long saws and ice picks to take out the first few blocks of ice from the pond.

Lincoln is president of the Thompson Ice House Preservation Corporation, which operates an onsite museum and sponsors the annual event. He wears thick coveralls, a flannel shirt and ice grippers on his boots. This is slippery business.

“Every year someone ends up in the pond, but no tragedies,” Lincoln said. “We grab ’em out pretty quick.”

Lincoln lives just around the corner, and he grew up skating on the pond. At 9, he got involved with ice harvest, learning everything he could about the process. As he got older, he helped out with a small commercial ice operation that was still going in the 1970s. But he said it wasn’t lucrative and by the following decade it had dried up.

Then the owners of the property, Herbert and Glenn Thompson, had an idea. They donated the land, the pond and the ice house to the newly formed preservation corporation to keep the annual ice harvest going and they asked Lincoln to be in charge. He still finds the job rewarding. 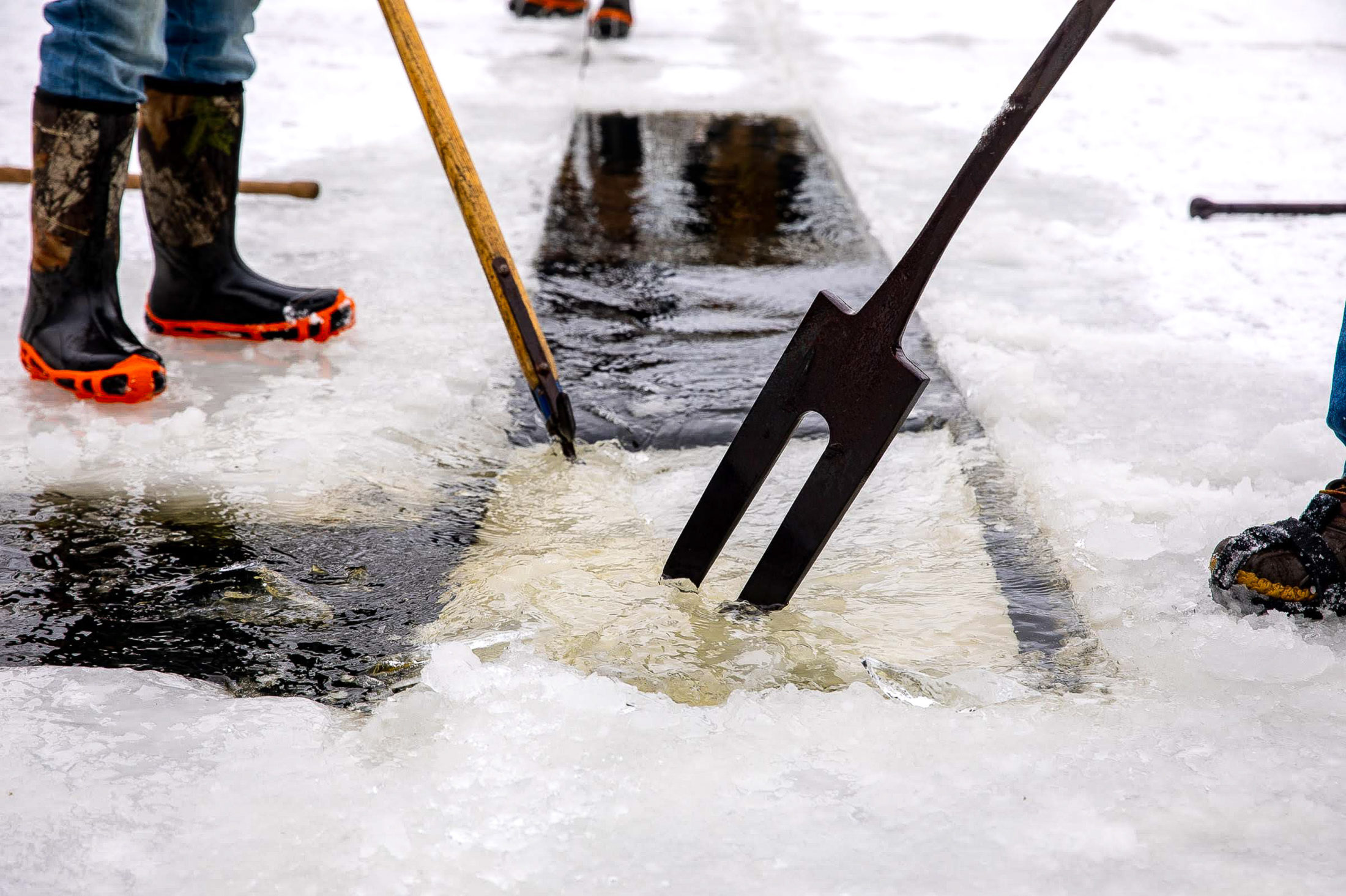 “You know, if we didn’t do this it would just go away and be forgotten,” he said. “I just hate to see tradition and history disappear, and this is one way to keep it a working history.”

First, a checkerboard-style grid is carved onto the pond’s surface using a gas-powered tool called a scribe. Then, volunteers of all ages use hand saws and ice picks to break off the blocks one row at a time and float them down a channel in the ice toward the ice house which is insulated with saw dust. Lincoln says it’s essentially the same process that was used in the 1800s. 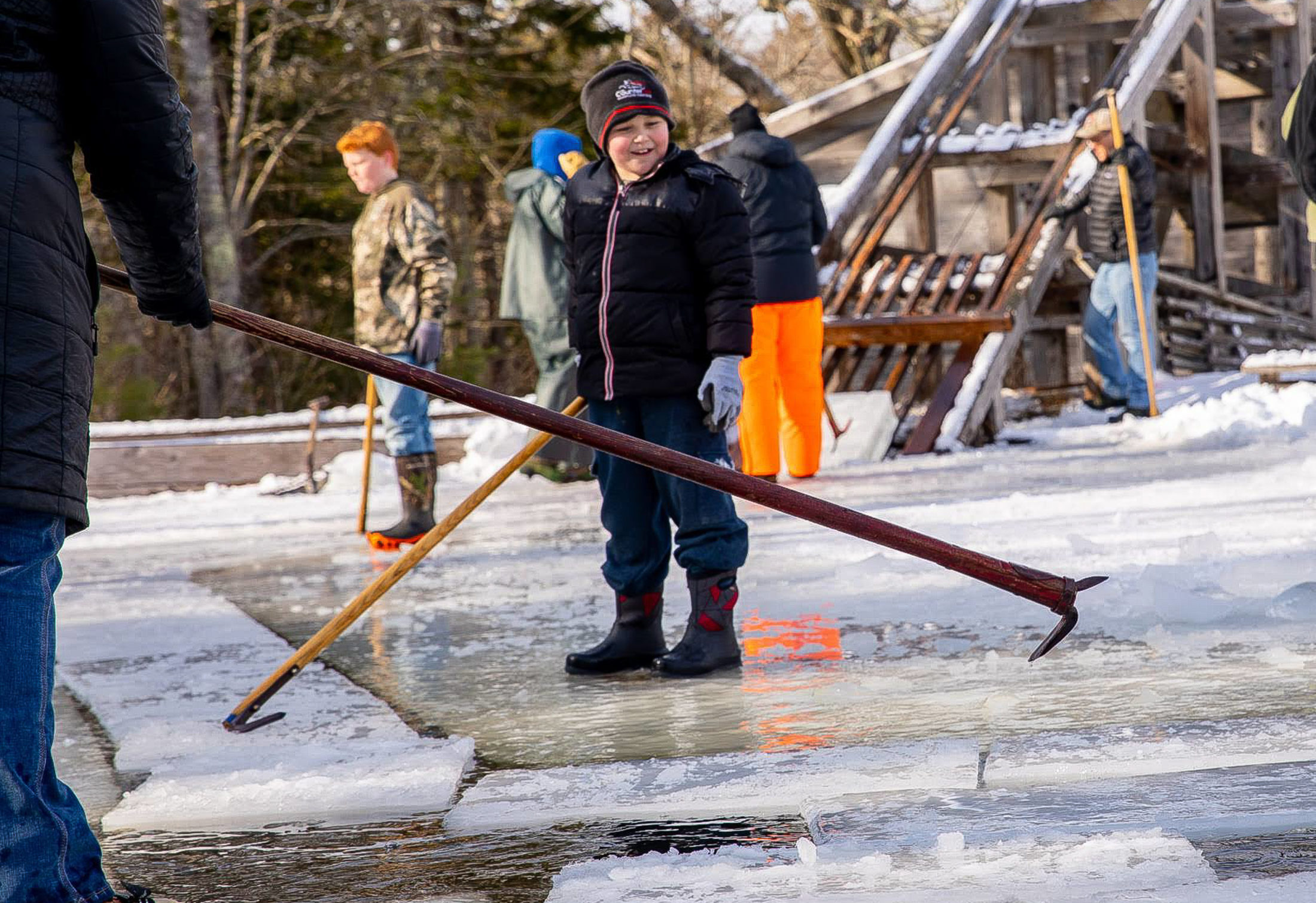 People of all ages are encouraged to participate. Photo by Rebecca Conley/Maine Public

Nine-year-old Isaac Ezell is volunteering with his father, James.

“I’ve been doing this since I was 6,” Isaac said, but his father corrects him.

“You did it before you were 6. I think we had you here when you were 4 for your first time,” James Ezell said.

Once the ice blocks are lined up, they’re pushed into a wooden chute and lifted, by pulley, into the ice house. A group of young, energetic “wranglers” takes over from there. The ice blocks glide in like giant, high-speed hockey pucks. The crew inside has to be capable of dodging the blocks, hooking them with an ice pick and then stacking the 250- to 300-lb. blocks one layer at a time until the ice house is nearly full. 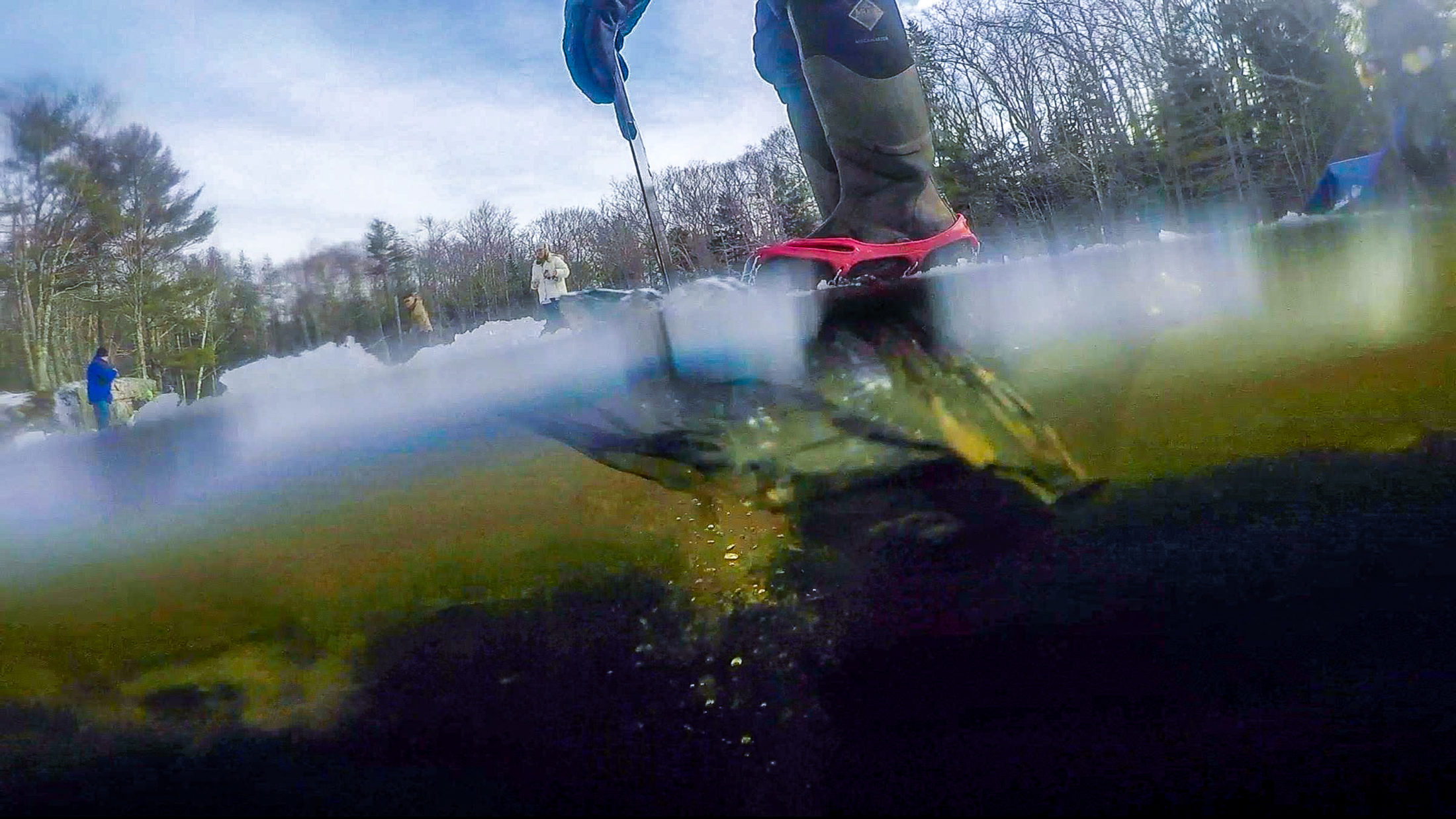 Cutting through the ice on Thompson pond. Photo by Rebecca Conley/Maine Public

“It’s very scary to watch,” said Karen Pride, who is visiting the ice harvest for the second year in a row. “You can see that if something did not go right it would be very bad.” Originally from California, Pride said she doesn’t like the idea of walking on frozen water. But her daughter Victoria, who lives nearby, gets into the action, stabbing the ice blocks to break them apart and sending them on down the channel.

By mid-morning, a crowd has gathered. There are dogs on leashes, babies being pushed in sleds and people in brightly colored hats and jackets trying out their ice cutting skills with 4-foot-long saws. One volunteer confides to a friend that he’s lost his to the bottom of the pond. 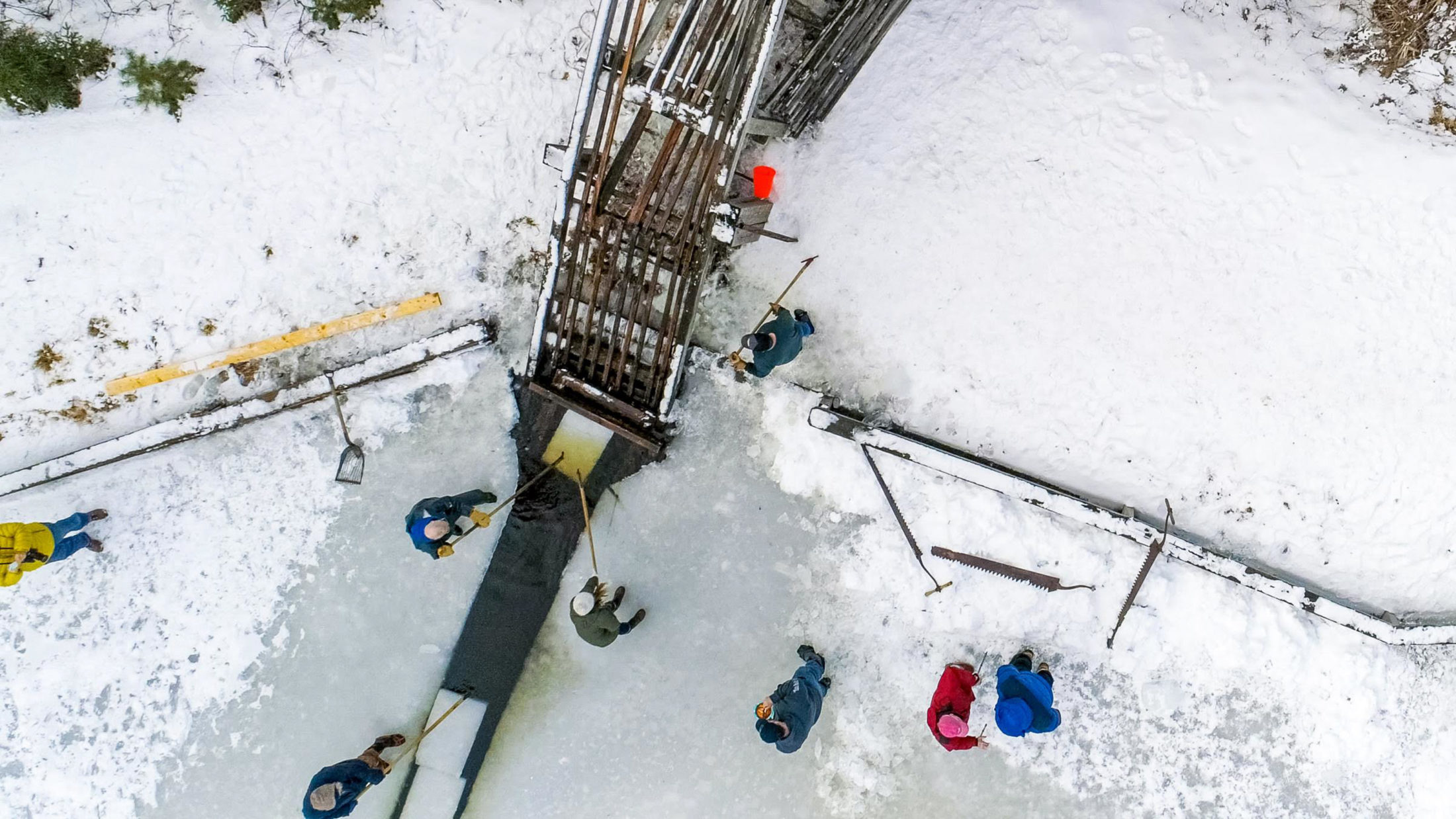 Birds eye view of the wooden ramp as the ice blocks are loaded. Photo by Rebecca Conley/Maine Public

Johanna Gauvreau and Justin Smith of Portland are sitting in heated folding chairs, eating chili and chowder, and watching three generations of volunteers take part in the effort. In the past, the couple has helped out but Gauvreau said this year they were concerned about the thickness of the ice.

“It looked a little slippery, a little thin, and I don’t have the greatest balance so we thought we’d just be spectators this year,” Gauvreau said.

The ice on the pond is about nine inches thick. That’s several inches less than normal, but Lincoln said winter seems to be arriving a little later each year. Still, it’s enough ice to sell to local fishermen and boaters throughout the summer. Sales of the ice help keep the museum running and they’re made on the honor system. 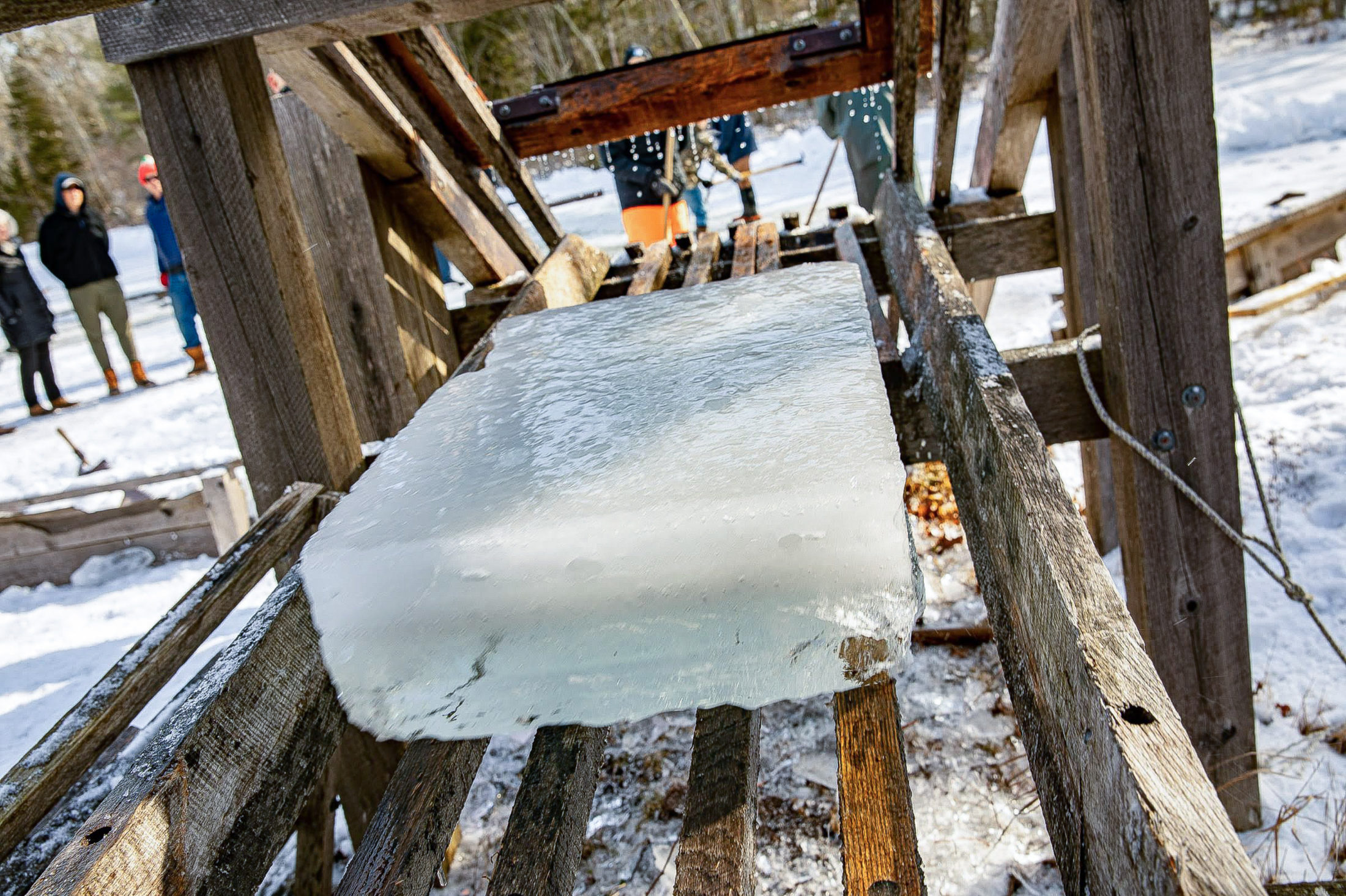 A block of ice glides down the ramp. Photo by Rebecca Conley/Maine Public

“We have a vending box,” Lincoln said. “You show up to take a block and there’s a little slot in the door where you’re supposed to put your dollar … but I would say for every 40 blocks we put in there we get about $10 back. But that’s society,” he said.

Some of the ice is also used for a popular ice cream social held each July. But more importantly, Lincoln said, it helps keep a chapter of New England history frozen in time.