The searchlights, which were stationed on both sides of the border, can be seen from up to 10 miles away. Photo by Carlos Morales/Marfa Public Radio
Arts & Culture KERA Texas

How this light installation connects strangers across the Mexico-U.S. border

EL PASO, Texas — For 12 nights this month, searchlights illuminated the sky on the U.S.-Mexico border between El Paso, Texas, and Ciudad Juárez, Mexico. They don’t have anything to do with border enforcement. Instead, they’re part of a binational art installation that aims to connect people on both sides of the Rio Grande.

The large-scale, interactive installation was called “Border Tuner.” Here’s how it worked: You step up to a microphone and turn a small wheel that controls a set of searchlights. Someone at another station just across the border does the same. When your lights intersect in the sky, it opens a bi-directional channel of communication and you can start a conversation. You can’t see each other’s faces but you can hear each other’s voices, booming from a loudspeaker.

There were six stations total: three at Bowie High School in El Paso and three at Chamizal Park in Juárez.

During the last week of the installation, Edna Leon leaned into a microphone at one of the stations outside Bowie.

“Buenas noches,” she said, tentatively, unsure who was on the other end. Three large searchlights flickered in time with her voice.

A response came back over the loudspeaker: “Buenas, buenas.”

Leon introduced herself. She explained that she lives in El Paso but is originally from Meoqui, in the Mexican state of Chihuahua.

“I have roots there but it’s a struggle to be able to go [and visit],” she said in Spanish. “So it makes me emotional to be able to communicate with my country without barriers, a passport, inspections.”

“How beautiful,” said her conversation partner. 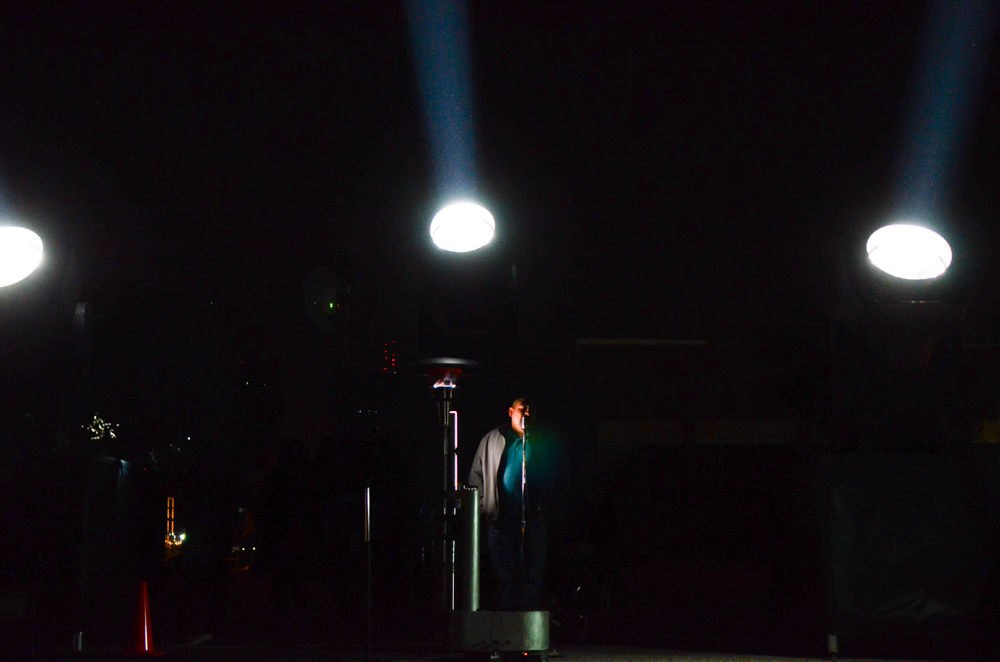 Surrounded by beams of lights, a man walks up to a microphone and tells the person across the border that he’s new to El Paso, Texas. He moved here a few years ago from Ciudad Juarez, Mexico, and says he misses it. Photo by Carlos Morales/Marfa Public Radio

Border Tuner was two years in the making. It’s the brainchild of electronic artist Rafael Lozano-Hemmer. He’s originally from Mexico City and is now based in Montreal.

Lozano-Hemmer has created interactive sound and light installations all over the world, including in Abu Dhabi and Dublin. He had been drawn to the U.S.-Mexico border for years, but his desire to work here intensified after President Donald Trump’s election. He began meeting with artists in the region.

“I realized that everybody in the field is tired of a very specific border story coming out about divisiveness, about racism, about militarization,” he said. “While all of this is true, there’s so many other narratives that are being missed about interdependence and coexistence and about the fact that connections between, at least, El Paso and Ciudad Juárez go deep historically, fraternally, socially, environmentally, economically.”

READ MORE: “No homeland, no fear”: A conversation with the radical art collective that imagines a borderless America

Lozano-Hemmer designed a project to highlight those connections, in partnership with the Rubin Center for the Visual Arts at the University of Texas at El Paso and the El Paso Community Foundation.

Pulling off a large-scale art installation across international lines was no easy feat.

Lozano-Hemmer had to coordinate with authorities on both sides of the border, including the Department of Homeland Security and the Federal Aviation Administration. When the U.S. government replaced a border fence between Bowie High School and Chamizal Park with new, stronger material, Lozano-Hemmer said he had to adapt his technology. For his “Border Tuner,” the searchlights formed a sort of bridge above the barrier.

“The idea that the artwork takes place above that wall to me is symbolically important because it’s almost like you’re trying to ignore it,” Lozano-Hemmer said. “You’re trying to say we still share the atmosphere.”

Each night of the installation began with a 30-minute curated performance by local artists, activists and historians. There was programming focused on indigenous voices, and voices from the LGBTQ community. There was a night dedicated to cumbia, and a night full of cover bands paying tribute to music icons Juan Gabriel and Selena.

“It becomes like a major concert spread out over six stations across the U.S.-Mexico border,” Lozano-Hemmer said.

But the most intimate moments came when strangers connected. Two children discussed their favorite animals. An attorney, who volunteers with asylum seekers, and a middle school art teacher thanked each other for their work. A woman in El Paso apologized for Trump; her conversation partner, in Juárez, told her not to worry and that “he’s only one person.”

Two women discovered they loved to sing, and performed a song together, their voices harmonizing through beams of light.

A young girl named Anabella celebrated her eighth birthday at the “Border Tuner.” Small crowds on both sides of the border sang “Happy Birthday” in English and Spanish.

“It was really cool for my daughter to be able to experience something this magical on her birthday,” said Anabella’s mother, Tracy Harris. She said the installation has been a learning opportunity for her two children. “It just kind of hits them like, ‘Hey, there’s other kids, there’s other people over there, and they’re like us.’”

KERA’s Art&Seek connects you to arts and culture in North Texas -- Dallas, Denton, Fort Worth and beyond.

Related Content
Arts & Culture
‘No homeland, no fear’: A conversation with the radical art collective that imagines a borderless America
Arts & Culture
How the writer behind the comic strip ‘Baldo’ blends humor with humanity
Arts & Culture
Why this artist used seesaws to protest at the border
Music KERA Texas
What does a mariachi opera sound like? This.
Top Stories
Arts & Culture KPBS California
Roger Dangel’s replica Oval Office holds historical artifacts that transcend time

For many Americans during the pandemic, the home office has seen a lot of activity. But, as Maya Trabulsi of…