COLORADO SPRINGS, Colo. — Virgil Dickerson, in a pandemic-era pivot, created a food offshoot of his marketing and consulting business when that work slowed.

K.R.E.A.M. Kimchi began as a way for Virgil to stay connected to his community after the emergence of COVID-19. And four months into operation, the food startup welcomed its first employee. The sole applicant had decades of first-hand experience and a passion for food.

At the heart of K.R.E.A.M. Kimchi is Chae’s take on the Korean staple. Five years ago, Virgil sat down with his mother to record her kimchi recipe, which she had memorized and shaped by instinct over the years.

“Everything she threw in the bowl, I caught, measured, wrote down, and took photos of,” he said. “And then I turned it into a recipe.”

The spicy, pungent recipe his mother made while growing up is the same one he uses today. Virgil said he sold more than 1,000 jars his first month in business.

“She’s so cute in her chef’s hat,” Dickerson said of his mother. 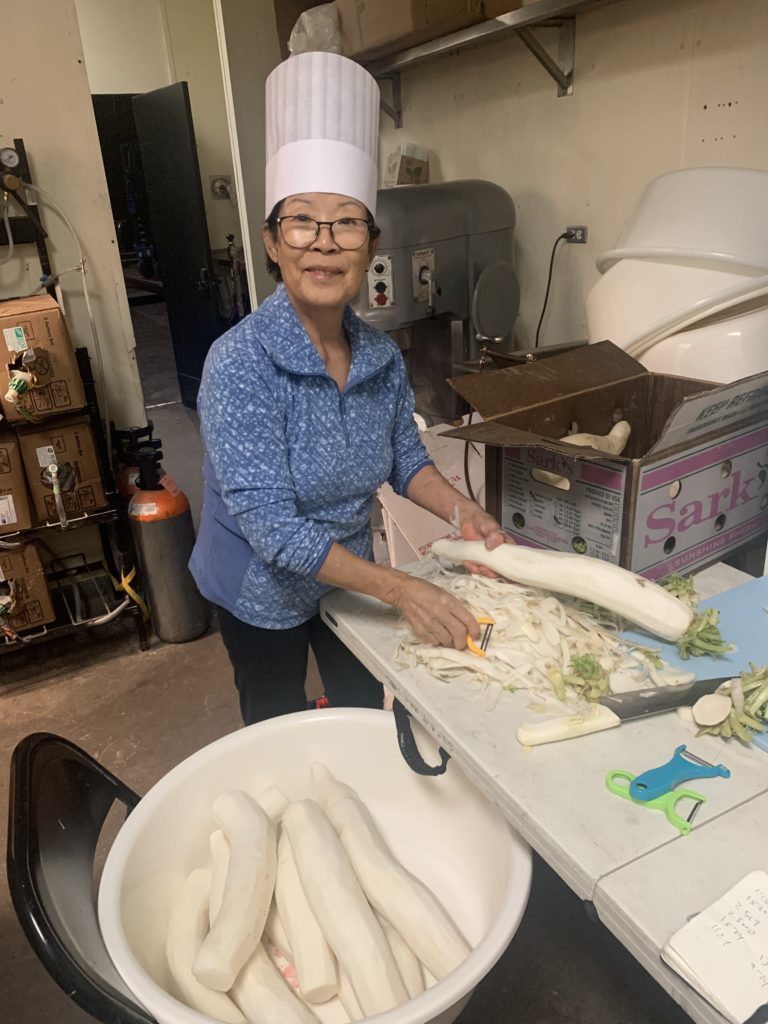 The importance of maintaining and passing down this family tradition is evident in Chae’s beaming smile of approval. “Most Koreans, when they leave home, the first thing they miss is kimchi and rice,” she said.

But for her son to start his own kimchi company?

“I would never have dreamt about it in a million years,” Chae laughed.

Kimchi, an iconic, fermented Korean dish, is based on napa cabbage and other vegetables, although ingredients can vary.

“When I started this business, I wanted to give a nod to the hip-hop that I love, but also to my Korean culture,” he said.

Born and raised in Korea, Virgil’s mother met his father, an American soldier, while he was stationed in Seoul. Shortly after Virgil’s birth in 1975, the young family emigrated from Korea to the United States. They moved south of Colorado Springs, to Fountain, positioned near the Army base of Fort Carson.

“It was really hard,” Chae said. For years, she deeply missed her family and Korea.

“There weren’t a lot of Korean Americans in our neighborhood,” Virgil said. “I grew up unsure of my identity.”

At an early age, when he had difficulty with English pronunciation, Virgil’s parents made the decision to stop teaching him Korean. “It was maybe not easy being a Korean in Colorado,” Virgil said. “I think growing up a person of color in the time that we did, we had confusing identities.” Virgil was slow to embrace traditional homemade Korean foods. As a youth in a world of ready-made, processed American fare, he thought of kimchi as an acquired taste.

“As a kid, I didn’t love kimchi,” Dickerson said. “I thought it was gross.”

“Growing up Korean American, but wanting to be American American, I just wanted to eat Totino’s pizza rolls, Chef Boyardee microwaved spaghetti, and Sizzlean. I feel like we ate Kraft Mac & Cheese at every dinner,” he said.

“We were eating biscuits and gravy and fried bologna,” Dickerson said. “But then we were also eating traditional Korean dishes, like bulgogi and galbi. We had a clash of food cultures.”

Wanting her sons to experience traditional Korean foods — and also wanting them to eat what she cooked — Chae sometimes created hybrid meals.

“My mom would make a dish called kimchi-jjigae, which is kind of a kimchi stew,” Dickerson said. “It typically has beef or pork. But for us, she made it with bacon and hot dogs. As American kids, we loved the bacon and hot dogs,” he remembered. “We loved the spice that the kimchi brought on. But we’d push all the kimchi to the side. It wasn’t until years later that I fell in love with kimchi.” 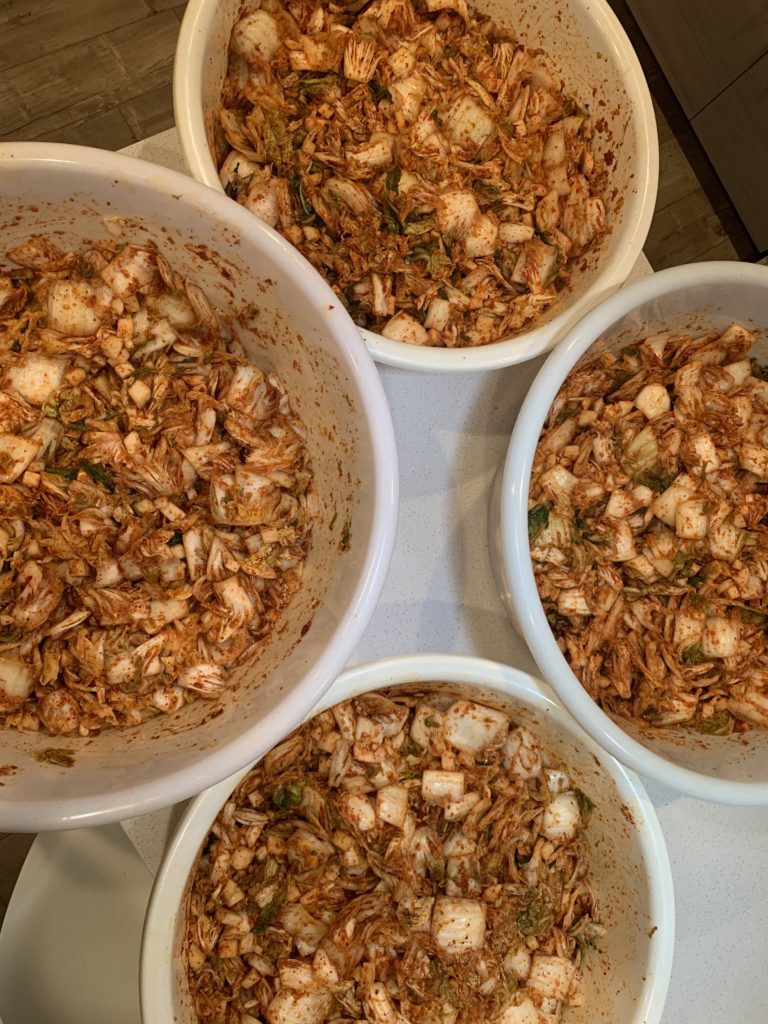 Dickerson remembers his mom’s cooking extending to feeding his friends and neighborhood kids.

“They were eating stuff they’d never had before, but man, they loved it,” he said.
It’s a tradition he continues.

“That’s how he is, too, with my friends,” said Logan, Dickerson’s 14-year-old son. “They’ll come over, and he cooks all this food. A lot of it is stuff they haven’t had before.”

Food remains a center of their family sphere.

“To this day, my mom always wants to make sure that we have plenty of food. It’s kind of like ‘My Big Fat Greek Wedding.’ She asks, ‘Are you hungry?’ I say, ‘No.’ She says, ‘Okay, I’ll go make you something,’” Dickerson laughs. “But I think it’s because, growing up in Korea, there were periods of time when people were starving.”

In the 1950s, the Korean War ravaged Chae’s native land, causing food shortages and a disruption of traditional agrarian life.

“We had a really hard time to grow up,” she said. “Lots of times, we barely had any food. And we never had this variety.”

K.R.E.A.M. Kimchi was born of demand — and a desire to spread the love.

In 2019, Dickerson, a one-time record label owner and music promoter, began a marketing and consulting business he dubbed K.R.E.A.M. Konsulting.

At the start of the pandemic, Dickerson maintained three regional marketing jobs, but work slowed considerably once the virus took hold in the U.S. Dickerson began making small-batch kimchi for friends to center himself, fill his time, and offer connections during uncertainty.

“A lot of my friends were suffering and having a hard time, and I said, ‘You know, I’m going to share a little love,’” Dickerson said.

Encouraged by his son Logan, Dickerson began delivering jars of his mother’s kimchi recipe to friends — mostly by bike. The brief, masked encounters with pals quickly became a critical element to stave off isolation throughout the pandemic.

“[For] a lot of people, I just dropped their jar off on their porch. Others I was able to see briefly at a distance,” Dickerson said. “Being able to talk to somebody for two minutes with our masks on made me feel like life was kind of normal for a short time. I got a lot out of that.”

“Everybody said, ‘What about my kimchi?’ Even strangers started reaching out to me,” he said. “I said yes to everybody who asked.”

Over the course of four months, Dickerson gave away more than 500 jars of kimchi.

“People were so excited,” he said. “They were cooking with it and taking photos of it.”

As more people prepared meals during Colorado’s “safer-at-home” public health recommendation, the jars of kimchi offered a variety of uses — as a side dish, prepared in recipes with other foods, or straight out of the jar.

Though he was offered money in exchange for his kimchi, Dickerson initially refused.

“But people still felt inclined to give me something. And so, we bartered,” he said. “And I got some of the craziest things! I have two bikes in my garage because of jars of kimchi. I got an hour-long massage for a jar of kimchi!”

He received baked goods, dinner, art, and so much beer that his beer fridge — a normal sized fridge, he emphasizes — couldn’t hold any more. “I had cases of beer outside of that fridge,” he said. “People are just so generous. It felt amazing. It was a beautiful thing.”

“It was so much fun to see what he’d bring home,” Logan said. “Desserts, pies. One of the bikes, I even ride now!”

The “Great Kimchi Giveaway of 2020” was a spirit-lifting success. So much so that when friends, family, and strangers-turned-friends hit the bottom of their jar, they clamored for more.

“I would never have guessed that I would start a kimchi business,” he said. “Had there not been a pandemic, I don’t know that I would have ever done this. I still can’t believe it.”

Dickerson has sliced through thousands of pounds of napa cabbage this year. As a fermented food, the kimchi process is critical.

“I chop and salt the cabbage, and get it kind of crisp, and take a lot of the liquid out,” he said. “I rinse it, and then I put in a combination of garlic, ginger, green onion, yellow onion, and Korean chili flake.” He carries vegan and traditional styles, which contain either red miso paste or fermented shrimp.

“Kimchi already is a pretty laboring and long process,” he said. Even so, he doesn’t hesitate to add extra personalized touches.

“I always write on the jar what I’m listening to,” he said. “So, it will say the date that I jarred it, and what music I had playing. Food and music are things that I love, and when I share that love, it feels so good.”

“It’s been great because this is something my mom showed me. It’s something that is part of our culture,” Dickerson said. “I’m so thankful to be able to do this with her. Being able to share this with Logan has been something that has made me even more proud of being Korean.”

“I think there are a lot of people out there who have hobbies or maybe side hustles, and they’ve been reluctant to take that first step and actually turn it into a business,” he said. “I think a lot of us have worked jobs where we haven’t felt appreciated, and we’ve had to stay there because we have to pay our bills. A lot of those people became unemployed and have time on their hands to maybe figure out a way to turn that side hustle into a business.”

On a warm fall Colorado night, three generations of Korean cooks prepared a feast in Chae’s kitchen in Colorado Springs.

“My mom is such a great cook,” Dickerson raved. “She can make pretty much anything, in addition to Korean food.”

Chae has been working at The Broadmoor’s La Taverne Kitchen in Colorado Springs as a cook for more than 40 years.

“We love to cook for people,” Dickerson said. “It’s kind of my love language. Because I saw my mom do that. She’ll make so much food for four or five people! And I’m guilty of that, too.”

Rare documents with 12 signatures of Dr. Martin Luther King Jr. sold on Wednesday for more than $130,000. They were…