NEW YORK — Chuck Close, a painter, photographer and printmaker best known for his monumental grid portraits and photo-based paintings of family and famous friends, has died. He was 81.

His attorney, John Silberman, said Close died Thursday at a hospital in Oceanside, New York. He did not give a cause of death.

Close, whose professional highlights include a solo exhibition at the Museum of Modern Art in New York in 1973, was known for using a grid structure for the representation of an image in nearly all of his works, which he said helped him break the face down into “incremental units.”

Time consuming and labor intensive, he produced a plethora of paintings that dissect the human face of such luminaries as President Bill Clinton, composer Philip Glass and the artist himself.

His works have been displayed in museums, galleries and even the New York City subway. 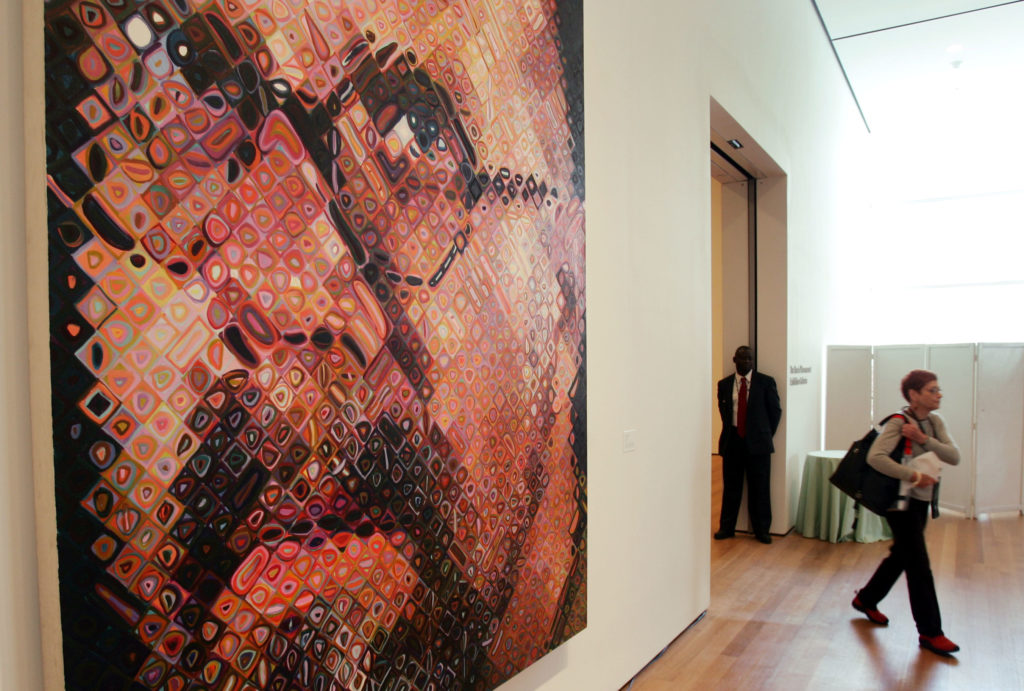 A visitor walks past Chuck Close’s oil on canvas painting “Self Portrait” (1997) in the newly renovated Museum of Modern Art in New York City, November 15, 2004. Photo by Mike Segar/REUTERS

In 2017, Close faced accusations of sexual harassment from some women who said he made inappropriate sexual comments when they had gone to his studio to potentially be models for him in prior years.

He told The New York Times that he had spoken to the women about their bodies as part of evaluating them as models, and apologized for causing any discomfort.

WATCH: In an age of #MeToo, artists accused of misconduct are seen in a different light

Close, who had been diagnosed with dementia-related conditions in 2013, also had mobility issues, requiring him to use a wheelchair.

In Close’s work, the “pixilated” images “are filled with tiny abstract colored shapes, individual brushstrokes or even the artist’s fingerprints. When viewed from a distance, the individual marks miraculously resolve into a surprisingly realistic face,” the Akron Art Museum in Ohio said in describing Close’s paintings and prints for an exhibition titled “Familiar Faces: Chuck Close in Ohio Collections.”

Born in Monroe, Wisconsin, Close graduated from the University of Washington, Seattle, and received a MFA from Yale University.