LAKEWOOD, Ohio — Painter Arabella Proffer’s art is out there. Her portraits of punks depicted as medieval royalty have international fans. But some of her most compelling work overlaps with her own health struggles.

Listen to ideastream’s story below.

At the start of a recent Zoom interview, there’s a glow to Proffer’s smile as she adjusts the camera on her end of the call. She says this is the first reason she’s had to get a little dressed up in weeks.

“I was so excited today because I got to actually get dressed and put on makeup and stuff,” she said. “I’ve just been lying in bed watching ‘Real Housewives,’ and barely eating because food sounds disgusting to me.”

Proffer was diagnosed last summer with inoperable cancer. When she announced it on her webpage, she wrote: “I don’t know what that will mean for my future. It is months, not years.”

Her artistic journey started as a child.

“When I was two, apparently, I drew an eye with a landscape in the iris, and my grandfather and my father were like, ‘Oh, she’s a genius and she’s going to be an artist,’” she said. “And they kind of decided for me that I was going to be an artist because I think their worst nightmare would be that I would become an accountant or something like that.”

As a teen, Proffer developed an interest in portraiture – with a twist. 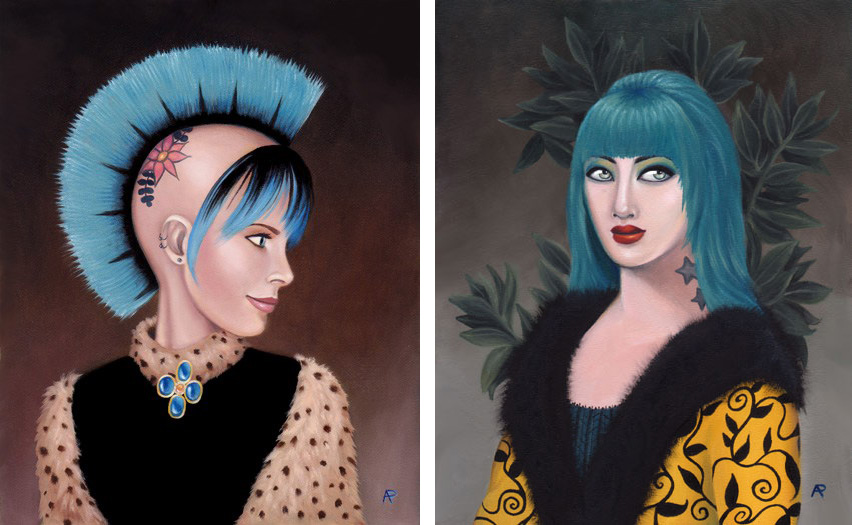 “I really loved aristocratic portraiture that you see in museums and stuff like that,” she said. “So, I kind of got this idea of having hair dye and mohawks and spike collars and the leather jacket. If this was the 1500s, you probably would do something outrageous like that just to show off, essentially.”

But, a little over 10 years ago, Proffer’s work began to change. 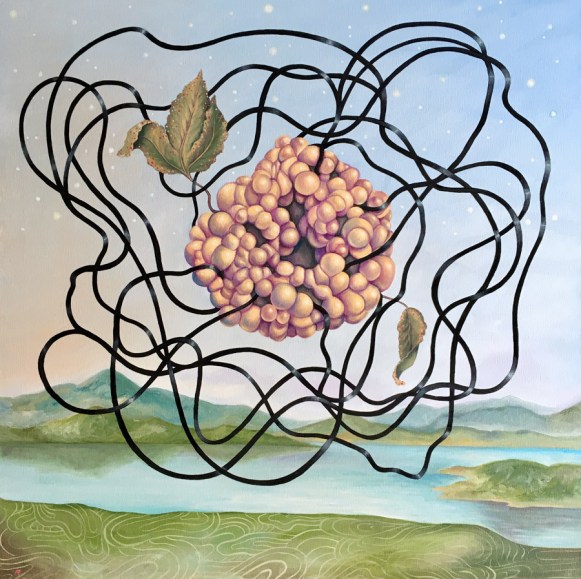 Recognizable faces and bodies disappeared, replaced by surrealistic landscapes of floating blobs, with drips and dark tendrils, weaving menacing webs. The change happened about the same time that she was diagnosed with a rare form of cancer in her leg.

“It was kind of strange because I had done these shapes for months before I even knew I had cancer,” she said. “And then, when they show me MRIs and scans, it actually looked exactly like what I’ve been painting.” 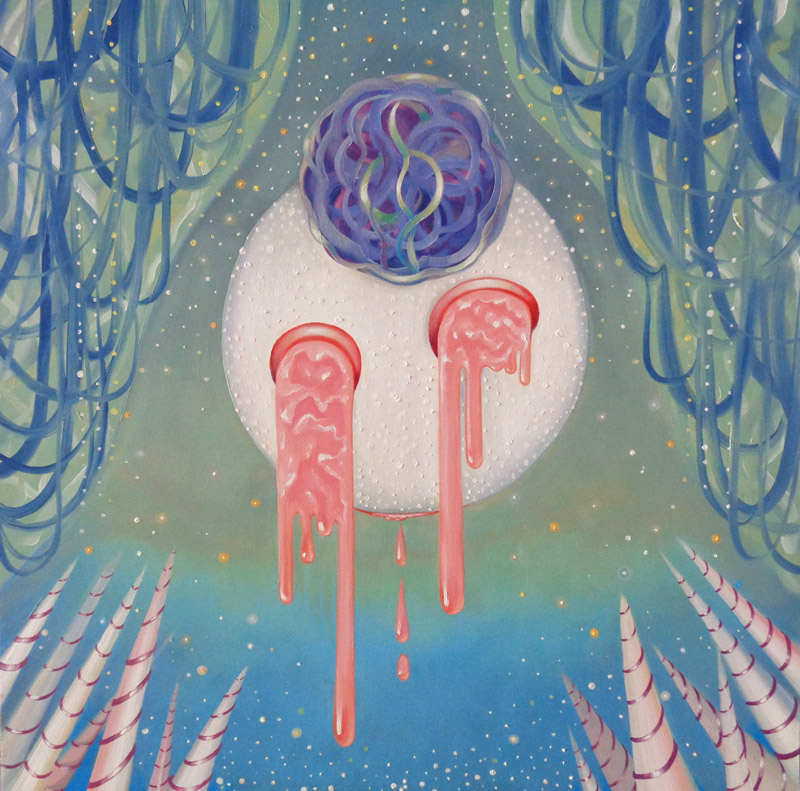 But she kept at it, especially after these abstract images started selling.

“My mom doesn’t like it,” Proffer said. “She thinks that they’re what’s making me sick, that I’m like doing these paintings and it’s somehow psychically making me sick in some way. But I don’t feel that way.”

After a series of operations, it seemed like she was over the worst of it. But then came the diagnosis that the cancer had returned. She’s now been through radiation, chemo and clinical trials. 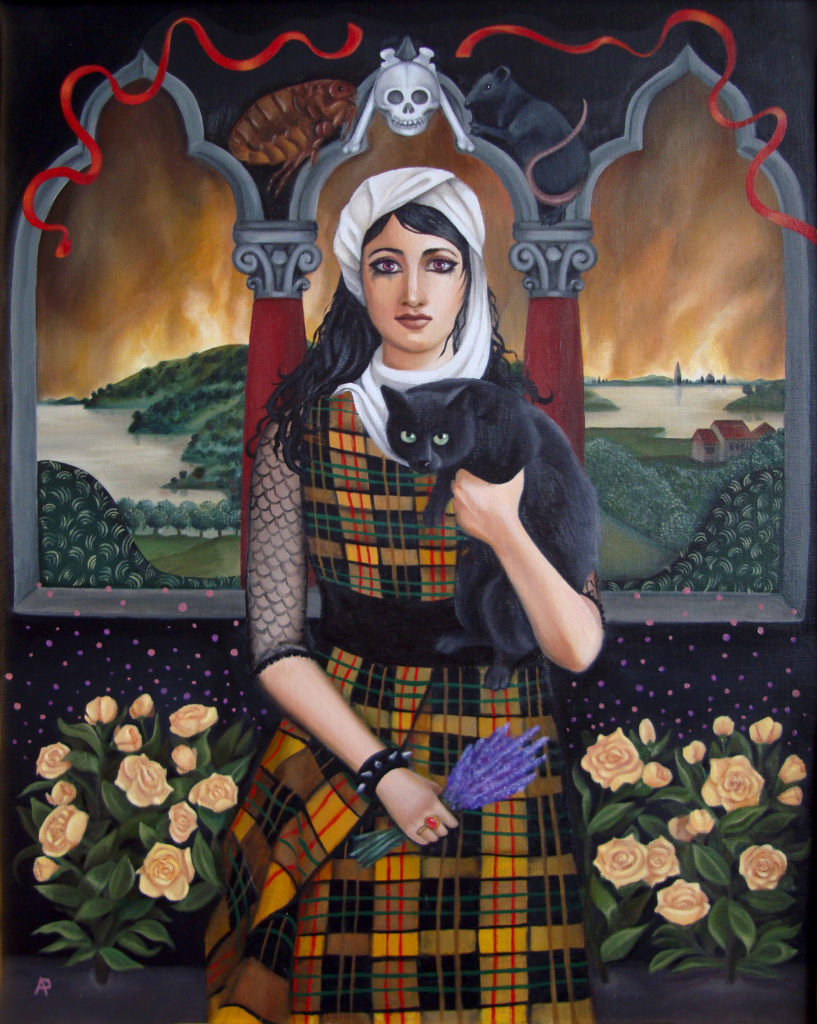 Visiting the hospital, during the coronavirus pandemic, has brought another level of surrealism to Proffer’s life. She described the empty corridors, filled with soothing New Age music, as scenes out of a dystopian novel. But, despite all she’s been through, she pushes forward with her life and keeps that smile as much as she can.

This past year, Proffer published a blog post during the coronavirus pandemic, with some advice:

“Go to that gig, that lecture, that exhibition, dinner party, and go on that date. Don’t be a dick and stay home watching TV because you’re too lazy and tired from a job you don’t like much anyway. I don’t care if you’re an introvert. Are you really going to say in your life, ‘Oh boy, I’m glad I stayed home scrolling through my phone,’ when you could have actually experienced something. Once this virus is gone, leave the damn house.”

Some tips about life, coming from someone living on the edge of it.