Editor’s note: Recognizing that artists of color face barriers in the art world, ideastream’s “Equity In Art” series seeks to amplify the work of those in Northeast Ohio. You can see all of ideastream’s features here. This story also includes imagery showing racial violence.

As a kid, dirt was a main ingredient for making mud pies, a cherished pastime for Spencer while growing up in Ann Arbor, Michigan. Now, as a sculptor, it’s one of the natural materials she turns to in her work. 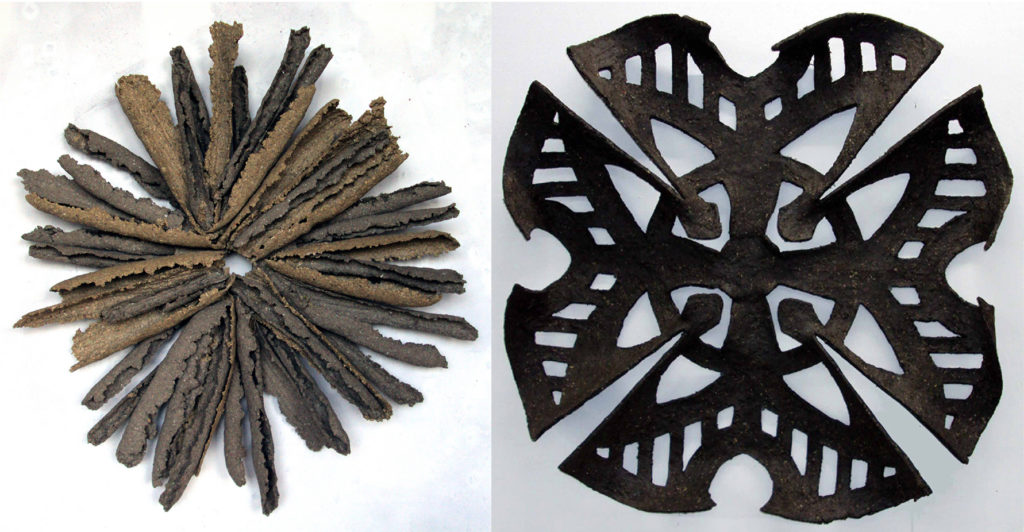 “Tusks” (L) is made of shredded newspaper. “Arms” (R) is made of compost and pulp. Photos courtesy of Charmaine Spencer

Her earthy works also reflect on cultural traditions. For instance, “Arms” resembles a European coat of arms, symbolic of identity and status. The sculpture is made of compost and pulp and vulnerable to a change in environment.

“Everything in it is biodegradable, so it will actually go back into the earth if you put it outside,” Spencer said.

One day roughly two decades ago, Spencer decided to visit the Cleveland Institute of Art (CIA) to learn more about the school. At the time, she was working in home health care and ready for a change.

“While I was doing that, I wasn’t doing any art. I was pretty unhappy. And I was really unhappy about seeing how the system treats sick people. So that was making me worse,” she said.

Spencer went on to study sculpture at CIA, receiving a bachelor’s degree in fine arts. Since then, her work has been exhibited around the city, including at Cleveland State University, SPACES Gallery and the Sculpture Center.

On a recent morning in her studio, Spencer weaved together long pieces of dried reed grass typically used in baskets, tying off sections with hemp thread.

While working on the piece, she said her focus remains on what she’s doing in the moment.
Due to the pandemic, not as many people are visiting her studio. It’s an inviting place, with lots of natural light coming through windows, illuminating her art on display. 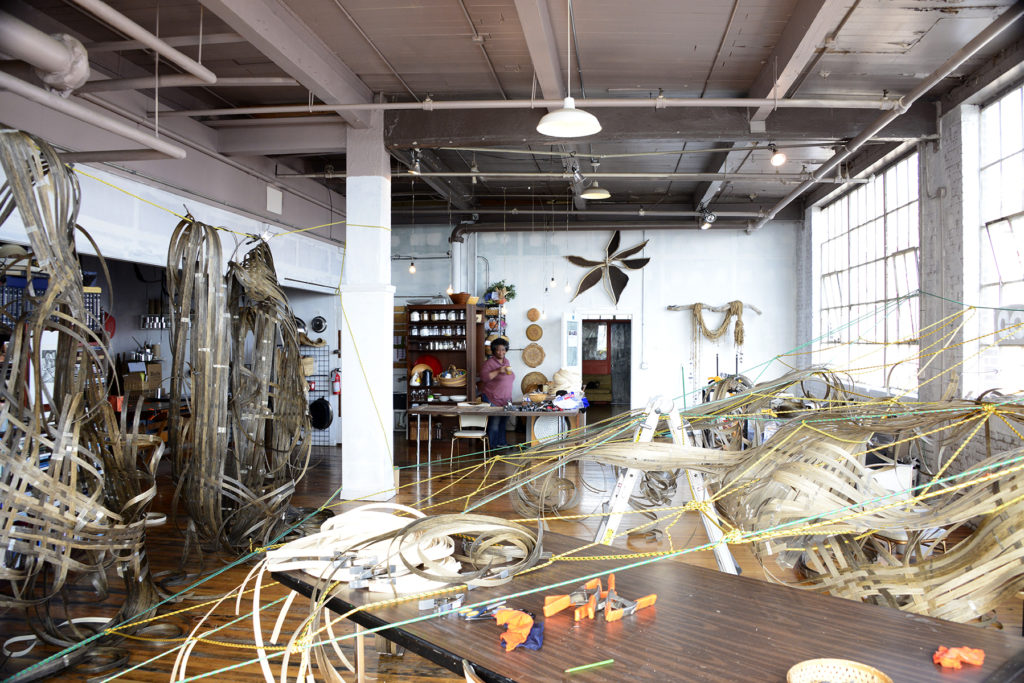 While Cleveland’s 78th Street Studios has been hosting small events, those are limited to a couple hundred people, compared to the thousands that have traditionally attended art walks every month.

“Trying to maintain being an artist, it is very hard right now,” she said.

In addition to making art, Spencer also is a job coach, but work has been tough during the pandemic.

In describing her art, Spencer said her sculpture expresses her joy and love for humanity, while her social justice pieces express anger. She had stopped doing the latter for a while, because she said she felt it wasn’t healthy to be caught up in those feelings. After a former Minneapolis police officer was charged in George Floyd’s death earlier this year, she renewed her focus to examine social issues through art.

“I’m going to feel that way anyway, so I’m making a lot more of my controversial kind of stuff,” she said. 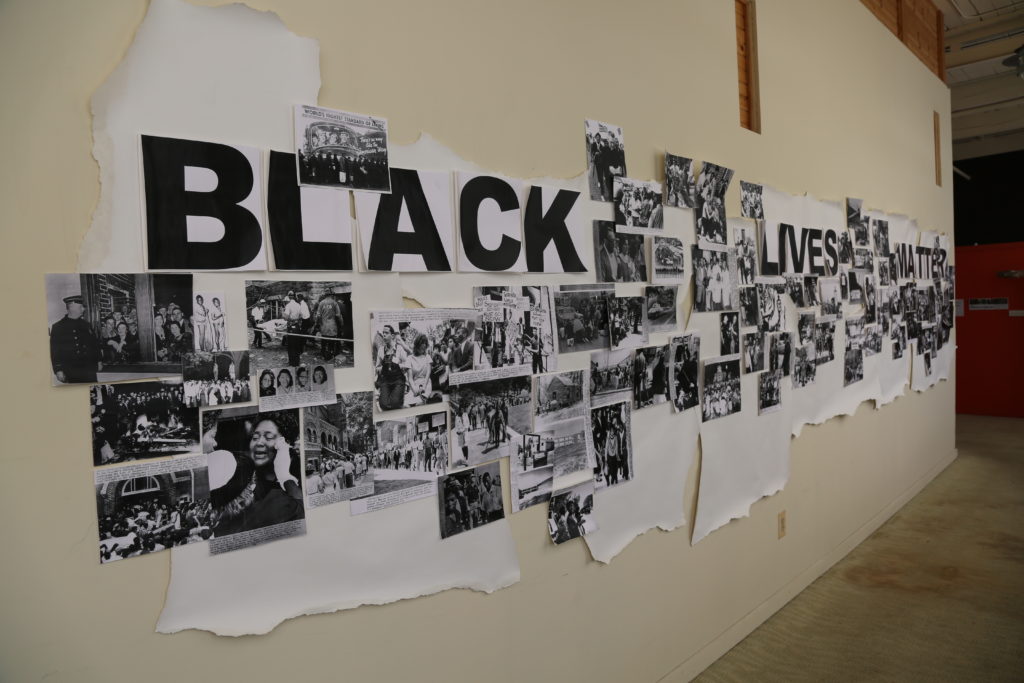 A Black Lives Matter mural of images on the wall outside of Spencer’s studio in Cleveland. Photo by Carrie Wise/ideastream

Years earlier while Spencer was a student at CIA, one piece she created didn’t sit well with someone, she said.

She had decorated a Christmas tree with ornaments made to represent Black people who died by lynching, and the tree was removed from a hallway outside of a previous studio space where she worked in Cleveland. Spencer said she later found it broken in the basement.

“They took it upon themselves to get rid of it,” she said.

While she realizes some might be unable to look at trauma in art, she doesn’t think artists or people should necessarily avoid such work.

“If you can’t see the images, and these images, they happen, they happen to people … and you are having a big problem looking at them, think of the people that have the problem, losing their loved ones,” she said. 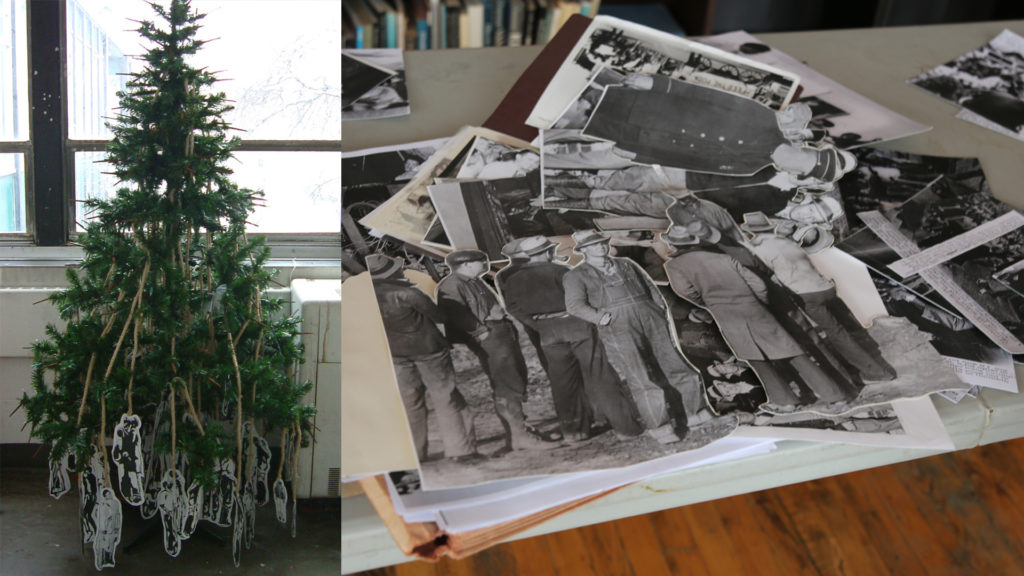 On the left is Spencer’s “Season for Change,” which is a Christmas trees with images that represent Black people who were lynched by white mobs. On the right are cutouts of old pictures on a table in Spencer’s studio. Photo courtesy of Charmaine Spencer. Photo by Carrie Wise/ideastream

Another piece she did as a student was a painting that included a collage of images of white men “standing around proud they lynched somebody,” she said.

To Spencer’s surprise, she found “nobody was horrified.”

Years later in her studio, she looked at a cutout of one of those images, showing a man looking confident in his stance and expression. She said she wants people to understand that the safety of all people – not just Black people – is threatened when someone participates in taking a person’s life. 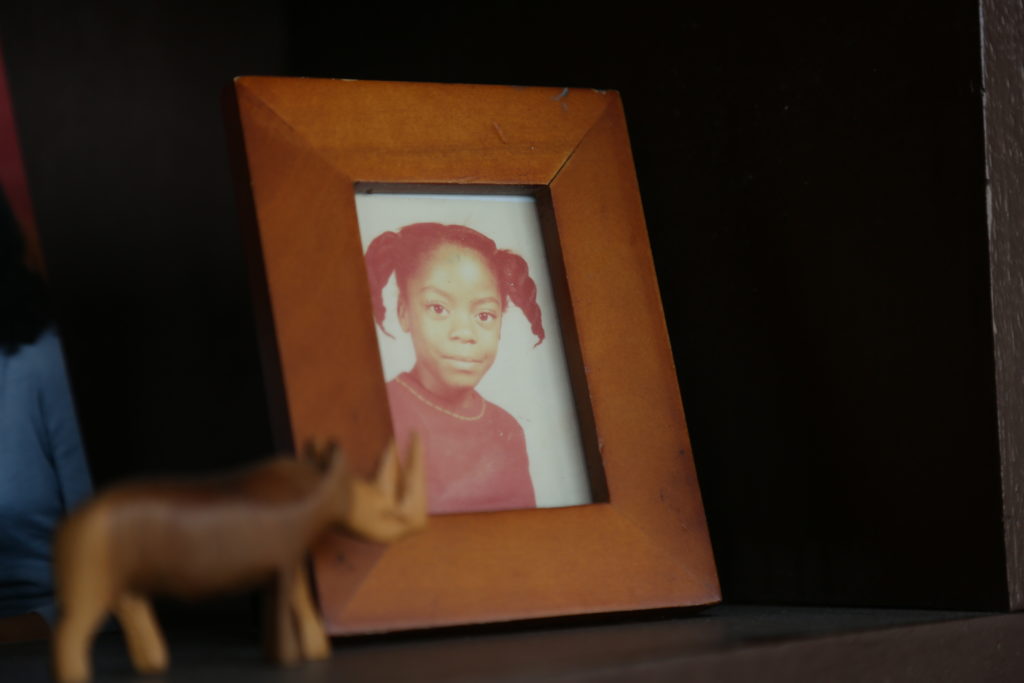 Spencer at a young age. Photo by Carrie Wise/ideastream

Spencer said she dreamed of being an artist at a young age. But even in her own studio, she isn’t necessarily recognized as one.

“I’ve had people come into my studio and walk up to my friend, who is white, and say, ‘I love your studio,’” she said.

It’s hard to know what opportunities were denied or judgments were made because she’s Black, but she said she knows the discrimination happens.

“The only thing you can do, I think, is create your own system,” she said. “And, yes, it’s a very difficult thing to do.”

How Cleveland is reflected in Spencer’s art

Cleveland makes its way into Spencer’s sculpture in different ways. Sometimes it’s working local material, such as driftwood from Lake Erie, into the artwork. Other times it’s taking inspiration from the city’s architecture or its history. 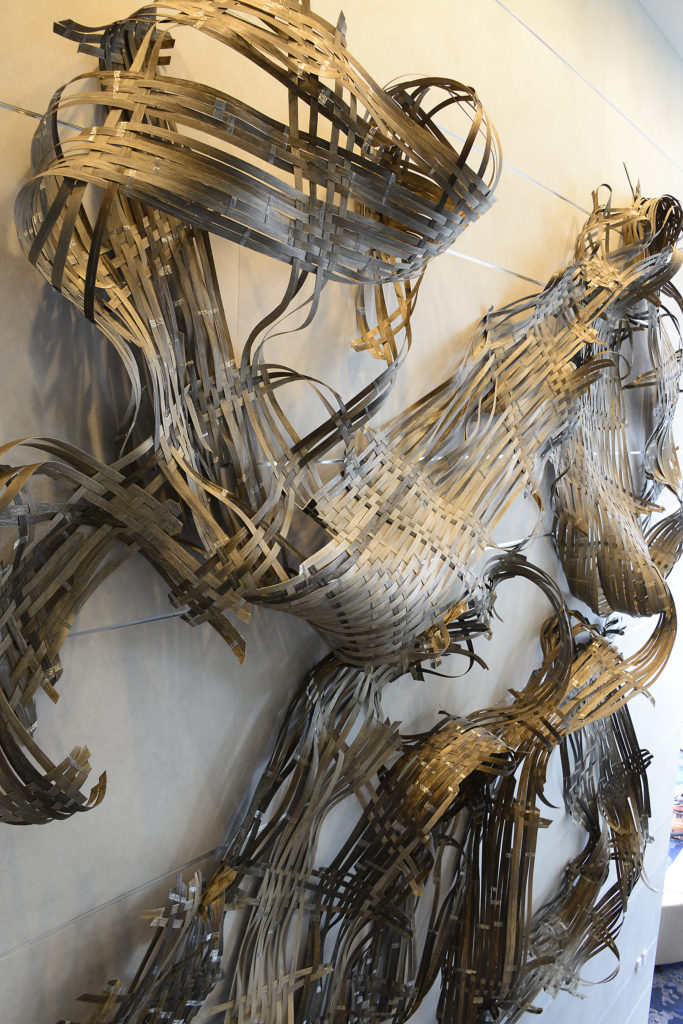 Spencer’s approach to creating sculpture is to start working and see what emerges.

“I never do a model unless it’s a commission,” she said. “You have to figure out, like, ‘OK, now I’m going to make this, like, structure stay in the middle of this.’ So you figure out a way.”

Spencer also stays open to changing the art. One wooden sculpture, for example, was going to be displayed like a labyrinth on the floor of an art show. During the setup for the exhibit, Spencer’s sculpture was moved to the side to provide working space, and she said she ultimately decided she “liked it better that way.” It became a “wall labyrinth.” 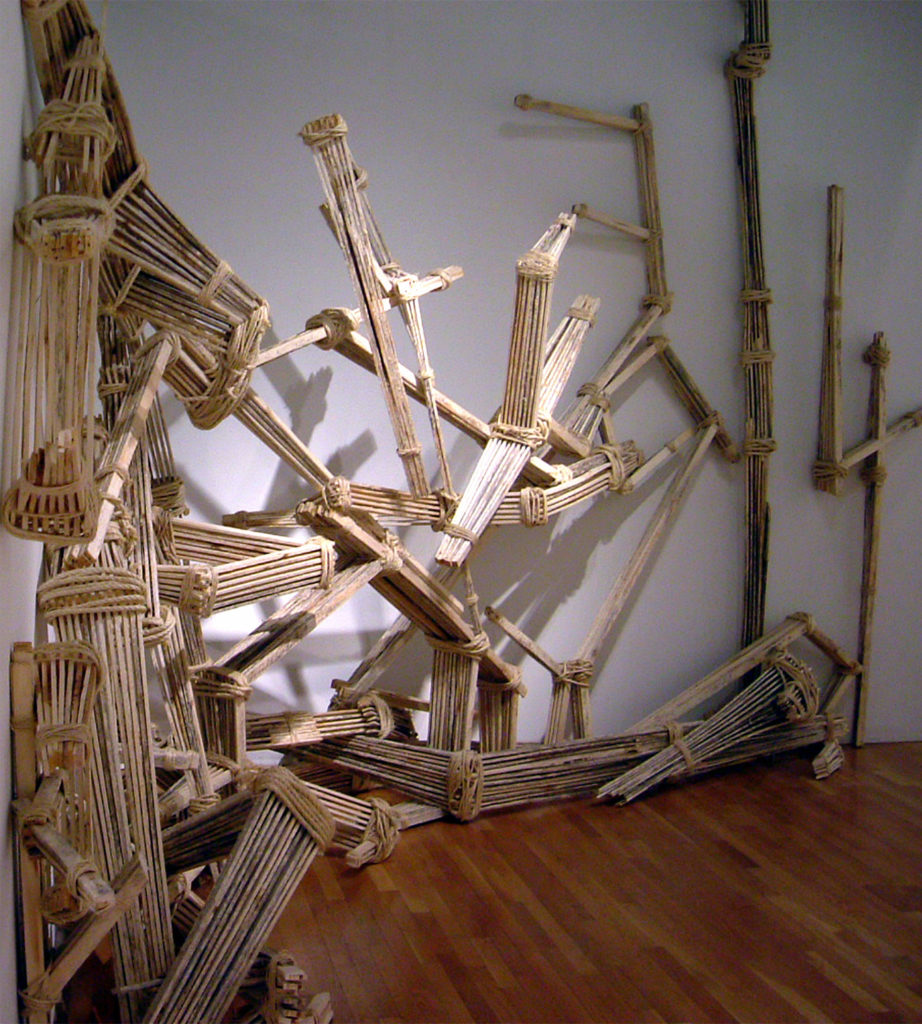 Spencer said she doesn’t have a favorite piece, but enjoys the experience of creating.

“You lose yourself in the sculpture,” she said. “Especially when you’re finding out some things, like that the materials can do or you can do with the materials that you’ve not done before.”