Did Edvard Munch paint a mystery work at St. Olaf College? That’s up for debate.

NORTHFIELD, Minn. — When a beguiling oil painting arrived on the campus at Minnesota’s Saint Olaf College in 2005, it came with mysterious origins. It was rumored to be by famed Norwegian impressionist painter Edvard Munch. But, it lacked appropriate documents to prove it.

A gift by alumnus Richard Tetlie, “Eva Mudocci” had previously been reviewed by Munch scholars. Gerd Woll, head curator at the Munch Museum in Oslo, Norway, viewed the painting in Washington, D.C., in 2005, but decided to not include it in the official catalogue raisonne. Other scholars dismissed it entirely based on digital images of it. 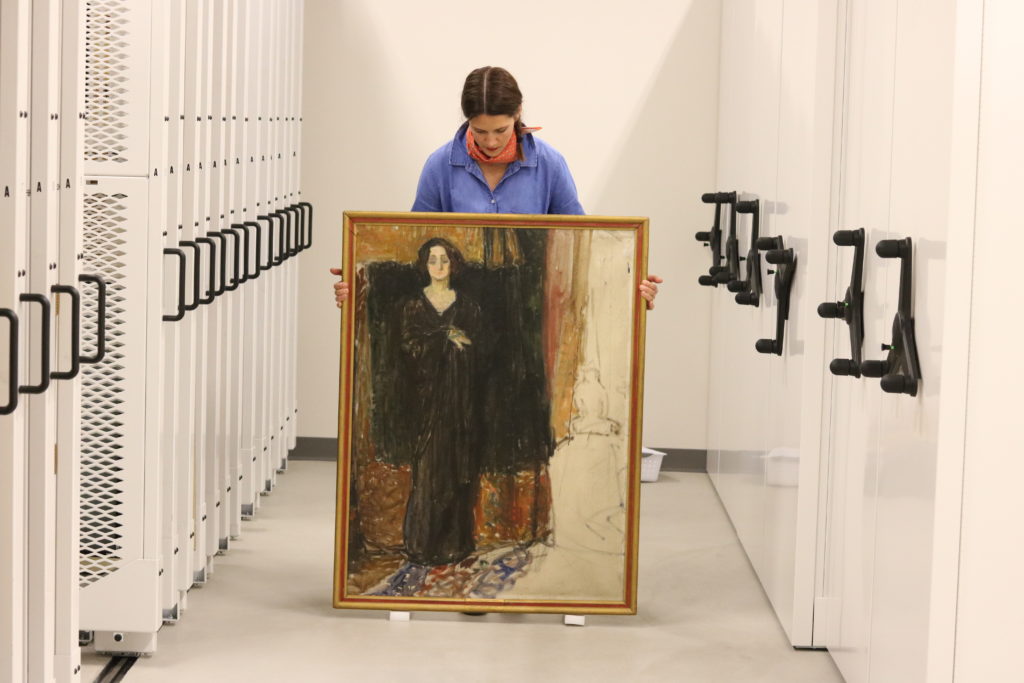 The skepticism was enough for Flaten Art Museum director Jane Becker Nelson to not take the artwork seriously. Instead, it hung in the dining room of the college president. For years, it was a conversation piece — that Mudocci, a violinist of some repute in Europe in the early 1900s, had been a one-time muse of Munch was never in question, and the pair’s close but stormy relationship continued to be a point of great speculation — but nothing more.

But recent events have prompted renewed inquiry into the authenticity of the painting. First, while conducting research for a biography on violinist Eva Mudocci, author Rima Shore discovered documents of interest, including a receipt of sale in 1959 by a Danish auctioneer that placed the artwork among the possessions sold by Kay Nielsen, a close personal friend of Muddoci and her longtime performance and life partner, Bella Edwards. The artwork, then-titled “Lady in a Black Dress,” was purchased by a Danish art dealer for the equivalent of $60 today, according to Shore.

The painting hung in the dining room of the college president. For years, it was a conversation piece — but nothing more.

Several months ago, Nelson sent the painting for a scientific analysis. The results have been encouraging.

“The work can now be dated to the time period that we know that Munch and Mudocci were together,” Nelson said. “And the materials are consistent with those used by Munch.”

But the analysis is not absolute proof. The authority to determine if the work belongs among Munch’s works rests with the scholar community at the Munch Museum in Oslo, Norway. To date, they have declined to get involved, and museum officials did not respond to our request for comment for this story.

“The problem with authentication, period, is that most people don’t want to do it anymore, because of legal ramifications that have arisen over the last few decades,” Minneapolis-based art appraiser Miles Fiterman said.

Art collectors who buy work on speculation can lose large sums of money if an artist’s foundation does not authenticate the work. And in turn, those decisions can leave the foundations vulnerable to lawsuits, which, according to Fiterman, has sometimes forced those organizations to close.

However, the latest revelations and scientific report have not gone unnoticed by the wider Munch scholar community. Reinhold Heller, professor emeritus at the University of Chicago, recently sat for hours with the painting. Though not entirely convinced it was painted by Munch, he does think the subject is Mudocci.

“Regardless of who the painter is, it is so fascinating to see a work so unfinished that it shows how the artist was thinking. It’s closer to what Munch would have done in 1904 or 1905, which is the time he was together with Eva Mudocci.”

Heller said he expects other scholars to renew discussions about the painting in the near future.
Known simply as “Eva” at Flaten Art Museum, the painting has captured the imagination of students on campus. Nelson said now everyone knows who Munch is.

Related Content
Arts & Culture
For the first time ever, ‘All the Rembrandts’ are on display in Amsterdam
Arts & Culture
‘Moonlight’ writer hopes audiences leave his new play ‘full of questions’
Arts & Culture
With East Village exhibition, the art of Jean-Michel Basquiat comes home
Top Stories
Arts & Culture
How holograms are adding a new dimension to our online world

Remember Star Wars where there was a little Princess Leia hologram or the holodeck in Star Trek? Hologram technology is…

One of Cuba's most celebrated avant-garde painters, Mariano Rodríguez, was a prolific 20th century artist whose exposure in the U.S.…