Rapper A$AP Rocky charged with assault over fight in Sweden

STOCKHOLM — A Swedish prosecutor on Thursday charged rapper A$AP Rocky with assault over a fight in Stockholm last month, in a case that’s drawn the attention of fellow recording artists as well as U.S. President Donald Trump.

Rocky, a platinum-selling, Grammy-nominated artist whose real name is Rakim Mayers, has been in custody since July 3 as authorities investigate a fight he was allegedly involved in on June 30 before appearing at a music festival.

Prosecutor Daniel Suneson said in a statement that he filed charges against the artist and two others “suspected of assault causing actual bodily harm, having come to the conclusion that the events in question constitute a crime and despite claims of self-defense and provocation.”

The rapper and the other two suspects, who were described as members of his entourage but not identified, will remain in custody until trial.

The Stockholm District Court plans to announce at a later point when that will take place, and the prosecutor has recommended that it set aside three days for the hearing. The charges can carry a maximum sentence of two years in prison.

Videos published on social media appear to show a person being violently thrown onto the ground by Rocky, 30. A defense lawyer has said it was self-defense.

Suneson said that he concluded otherwise after studying videos available to investigators.

“It is worth noting that I have had access to a greater amount of material than that which has previously been available on the internet,” he said. “In addition to video material, the injured party’s statements have been supported by witness statements.” 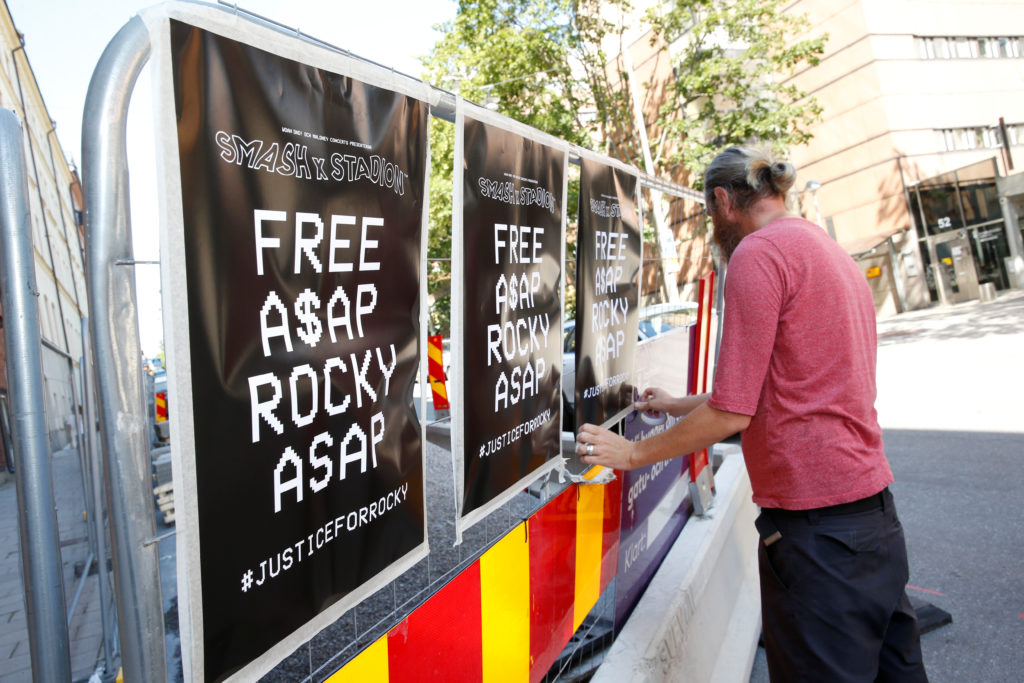 A man puts up posters outside the Kronoberg custody, as a prosecution for assault and battery was announced against U.S. rapper ASAP Rocky in Stockholm, Sweden July 25, 2019. Photo by Fredrik Persson/TT News Agency/via Reuters

Suneson added that there were initially two injured parties in the case, but the allegations concerning one of them were dropped due to “insufficient supporting evidence” and the charges relate to only one alleged victim. That person has not been identified.

A counter-allegation was made by the artist’s bodyguard against one of the alleged victims, but that case was closed earlier this week, the prosecutor said.

Sean “Diddy” Combs, Justin Bieber and Kris Jenner are some of the celebrities who have publicly expressed support for Rocky. The artist has collaborated with Kendrick Lamar, Cardi B, Drake and Selena Gomez.

On Saturday, Trump said he spoke with Swedish Prime Minister Stefan Lofven about A$AP Rocky and “offered to personally vouch for his bail,” something that is not available under Swedish law. Urged on by the first lady and celebrities including Kanye West and Kim Kardashian West, the president had said in a Friday tweet that he would intervene to try to free Rocky.

Lofven’s press secretary, Toni Eriksson, later said that the two leaders had a “friendly and respectful” conversation in which Lofven “made certain to emphasize the complete independence of the Swedish judicial system, prosecutors and courts” and stressed that the government cannot and will not attempt to influence the legal proceedings.

Geir Moulson in Berlin contributed to this report.