Regina King says a special moment in her directorial debut was seeing one of Sam Cooke’s most enduring songs in the script.

Cooke’s “A Change Is Gonna Come” is an anthem of the civil rights movement. And in King’s film, “One Night in Miami …”, the song is sung by “Hamilton” star Leslie Odom Jr., whose performance ends the movie on a high, but bittersweet, note.

The tired resignation of the song’s final lyrics — “But I know a change is gonna come, Oh, yes it will” — along with the tears shed by Odom Jr. as he sings it, convey a strong message that is heartbreakingly familiar. In the wake of a year filled with protests over racial injustice and police brutality, “A Change Is Gonna Come” is as applicable to America today as it was when Cooke first released it.

“While Sam Cooke was played all the time in my household, [“A Change Is Gonna Come”] was probably not the song that resonated for me as a kid,” King told the PBS NewsHour’s Jeffrey Brown. “I went and played the song after I read the script. And I have to be honest — that was the first time the song just filled me up in a way that it never had before.” 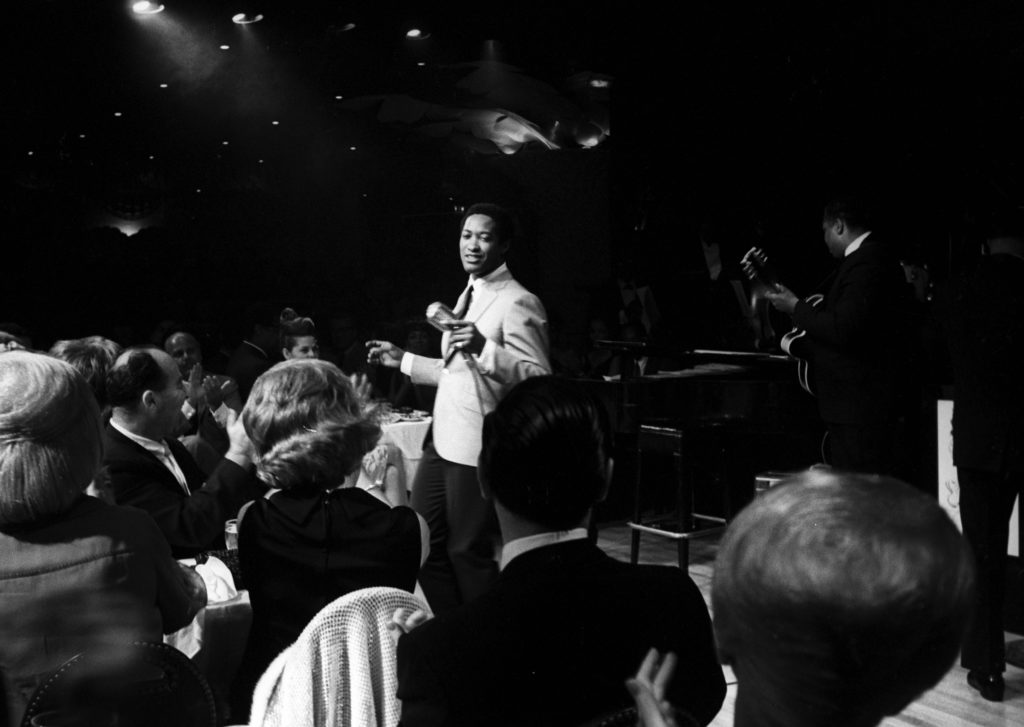 Sam Cooke on stage with a band at New York’s Copacabana nightclub in June 1964. Photo by Ben Martin/Getty Images

“One Night” tells a fictionalized version of a real moment in history, when Malcolm X (Kingsley Ben-Adir), Cassius Clay, who later changed his name to Muhammad Ali (Eli Goree), Jim Brown (Aldis Hodge) and Cooke spent one evening — Feb. 25, 1964 — together. Set on the night of a young Ali’s historic championship win, the four friends gathered in a hotel room to celebrate. Screenwriter Kemp Powers imagines the four men discussing the impact of racism within American society and their personal roles in dismantling it.

King said the dialogue in Powers’ script was the star, and it needed the right actors to “bring it to life in a way that would feel like you’re a fly on the wall, like you were having the opportunity to witness a private conversation publicly.”

Each actor portrays the men’s personal and intellectual perspectives. They butt heads over differing values and politics — but ultimately walk away rejuvenated in their fight for racial justice and equality.

For Cooke, in the movie’s telling, that new energy was channeled into writing “A Change Is Gonna Come.” In real life, Cooke actually was moved by Bob Dylan’s “Blowin’ In The Wind,” a song he said he was somewhat ashamed that he hadn’t written it himself.

Today, “Change” is revered as one of the most famous protest songs of the 1960s.

“I loved his voice,” King said. “His voice was a voice that even if I had never heard the song, if Sam Cooke was singing it, I would immediately know that it was Sam Cooke.”

Cooke died at age 33 in December 1964, the same year “One Night” takes place. Police responded to a call from a Los Angeles hotel manager who said she shot Cooke after he attacked her, and though the death was ruled a justifiable homicide, there are a number of conflicting details about that evening, which were most recently the subject of an episode of “ReMastered,” a documentary series on Netflix.

“One Night” was released on Prime Video the same month as Cooke’s birthday. He would’ve been 90 this year.