Roscoe 'Fatty' Arbuckle, a star of the American silent screen who was accused of rape and manslaughter in 1921. Photo by Hulton Archive/Getty Images
Film & TV

The sexual assault case that shocked Hollywood almost a century ago

Decades before the arrest and conviction of movie mogul Harvey Weinstein, sexual assault and violence was a prevalent problem among the Hollywood glitterati. One of the first mass media cases of this terrible abuse centered on the once-popular film star Fatty Arbuckle and what happened during a wild party on Labor Day of 1921.

Roscoe Conkling Arbuckle was born in Smith Center, Kansas, on March 24, 1887, weighing more than 13 pounds. The Arbuckle family moved to the Los Angeles area (Santa Ana, California) when Roscoe was 8. There, his schoolmates teased him for being overweight with the nickname of “Fatty,” which he retained for the rest of his life. A few years later, a vaudeville troupe visiting Santa Ana asked him to perform with them. Arbuckle loved the applause and was immediately, and forever, typecast as a comical, lovable, portly juvenile.

Soon he was a major star on the vaudeville circuits and played theaters all around the world. In 1914, he was “discovered” by Paramount Pictures. The film studio paid him the princely sum of $1,000 a day plus 25 percent of each film’s royalties. So popular were his silent movies that, in 1918, Paramount upped the ante by paying him $3 million to star in 18 motion pictures over the next three years–a salary second only to Charlie Chaplin. Arbuckle mentored Chaplin and discovered Buster Keaton, who made several films with Arbuckle, and spoke admiringly of his skills as a film comedian: “I learned it all from him.”

Delmont claimed Arbuckle said, “I’ve waited for you five years, and now I’ve got you.”

On Sept. 5, 1921, Arbuckle’s friend Fred Fischbach planned to throw the party to end all parties at the St. Francis Hotel in San Francisco. The guest of honor was Arbuckle, whose latest film, “Crazy to Marry,” was a national hit. Fischbach rented three rooms (No’s. 1219, 1220, and 1221)–all connecting to one another. He brought along a hefty supply of bootlegged booze (this was still the era of Prohibition), lots of eager starlets and music. Among the showbiz women invited to the party was a 25-year-old aspiring actress named Virginia Rappe.

According to a witness-guest named Maude Delmont, Arbuckle and Rappe downed three or more gin and orange wine drinks together when he pulled her into one of the adjoining rooms. Delmont claimed Arbuckle said, “I’ve waited for you five years, and now I’ve got you.” 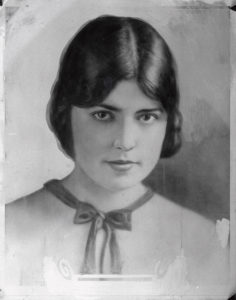 Within an hour, Delmont claimed to hear screaming and tried to enter the room, but Arbuckle had locked it shut. Eventually, Arbuckle opened the door, clad in pajamas, wearing Virginia’s hat on his head and, Delmont said, a big “Fatty Arbuckle smile” on his face. Inside the room, Delmont charged, Rappe was on the bed in pain, yelling, “I am dying, I am dying. He did it.” The hotel doctor and nurse were called. They moved Rappe to another room to rest for a few days until finally being taken to a hospital where she died, on Sept. 9, of a ruptured urinary bladder.

Delmont told the police that Arbuckle had raped Rappe and that the impact of his weight (he was more than 266 pounds) ruptured her bladder. Later, Rappe’s agent, Al Semnacker, made the story worse by claiming that Arbuckle used a piece of ice to rape her–a story that quickly transmogrified into the obscene use of a Coca-Cola or wine bottle. Other witnesses testified that Arbuckle had actually used the ice to rub on her stomach as a means of relieving her belly pain.

Arbuckle turned himself into the San Francisco police on Sept. 10. He was charged with manslaughter and his mugshot made front-page news across the nation. Arbuckle told a very different story of what happened. He claimed that the drunken Virginia became so hysterical that she tore off her clothes. Complaining of shortness of breath, Arbuckle said, she began vomiting, which he thought was the result of drinking too much liquor. He tried to calm her down by getting her in a chilled bathtub and then called for the hotel doctor.

At the trial, an ambitious district attorney named Matthew Brady used and misused his witnesses to make his case against Arbuckle. There were conflicting testimonies and a great deal of drama, including the claim that Rappe’s fingerprints on the doorknobs suggested her attempt to escape the room, and that the doctor and nurse treating Rappe testified that she did not mention being raped — testimony the district attorney had thrown out as hearsay.

Other hearsay claims included the story that Rappe was suffering severe abdominal pain for over six weeks, which she blamed on a sexual relationship with another man. This statement is especially interesting because if Rappe contracted a sexually transmitted disease, such as gonorrhea or chlamydia, the infection could have advanced into pelvic inflammatory disease, which can develop into a serious, chronic condition. Another theory was that she may have suffered from the effects of a botched abortion, which also could have led to her urinary bladder problems.

Arbuckle’s lawyers presented the coroner’s autopsy report that concluded that Rappe had chronic inflammation to her bladder but there were “no marks of violence on the body, no signs that the girl had been attacked in any way.” This disproved the allegation of an external cause or force (such as Arbuckle jumping on top of her) for the bladder rupture. But the pathologists also reported no evidence of pregnancy, previous abortions, or sexually transmitted diseases.

There were actually three Fatty Arbuckle trials. The first one ended on Dec. 4, 1921. The jury deliberated for five days and voted 10-2 for his acquittal. A second trial began in January and ended less than a month later. It, too, resulted in a deadlocked jury, 9 to 3, but in favor of a guilty verdict.

After the two mistrials, a third trial was held in March and April. At these proceedings, Arbuckle allowed his lawyers to be far more aggressive in their approach to shaming Rappe. Several witnesses who knew her testified that she had long had chronic cystitis (bladder infections and inflammation), which was exacerbated by drinking alcohol. Some blamed the victim by testifying that she often drank heavily, and when she was drunk at parties she tended to disrobe in front of the guests. Others testified that Virginia was known to be sexually promiscuous.

Arbuckle’s lead attorney, Gavin McNab, also attacked the veracity of Maude Delmont’s testimony. McNab unveiled her other life as “Madame Black” who procured young women for parties thrown by wealthy men. Afterward, she and her stable of girls would often accuse these male attendees of rape, and blackmailed them into paying large sums of money. 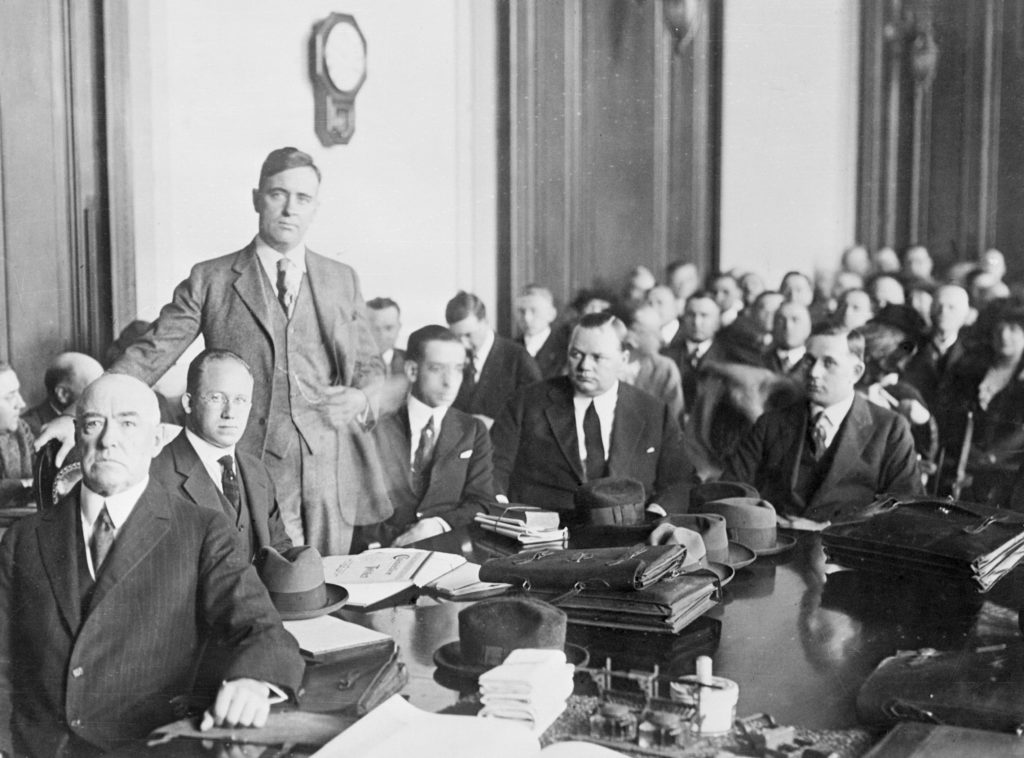 The courtroom where one of the trials of Roscoe “Fatty” Arbuckle was held. Left to right are: Attorneys Gavin McNab, Nat Schmulowitz, Charles Brennan (standing), Milton Cohen, the defendant Arbuckle and Joseph McInerney. Photo by Bettmann/Getty Images

After a little more than five minutes of deliberation, the jury acquitted Arbuckle of all the charges against him. The jury publicly stated, “We wish him success and hope that the American people will take the judgment of 14 men and women that Roscoe Arbuckle is entirely innocent and free from blame.”

But was he? Arbuckle may have not been guilty of manslaughter. And he likely did not cause Rappe’s ruptured bladder or her subsequent death. But behind that locked door in Room No. 1219 of the St. Francis Hotel, it sure sounds as if some type of sexual violence or unwanted sexual advance may have occurred. Since both participants are now dead, we will never know for certain.

After the trials, the motion picture industry barred Arbuckle from appearing on the screen. His career was ruined and his bank account depleted. Still, he fought to get back in the movies. The industry ban was lifted eight months later, but no one really wanted to see him on the silver screen. Keaton helped Arbuckle financially and with jobs in his production unit. Arbuckle began working behind the camera, occasionally directing films under the name of William B. Goodrich (or Will B. Good). In 1932, he made a screen comeback by doing a series of “two-reeler” comic films for Warner Brothers. The shorts were well-received and in June 1933, he signed a contract with Warner Brothers for a full-length motion picture. Celebrating with his friends that evening, Arbuckle declared, “This is the best day of my life.” Later that night, he died in his sleep of a heart attack. He was 46.

Nearly 100 years later, sexual violence continues to be a major public health problem on college campuses, the workplace, and in too many other corners of American society. It affects millions of people each year and is often unreported because the victims are ashamed, embarrassed or fear retaliation. According to the Centers for Disease Control and Prevention, more than one in three women experience sexual violence involving physical contact sometime during their lifetime, and one in four men experience sexual violence involving physical contact during their lifetimes.

We can all play a role in prevention by teaching our children and students about sexual violence, consent, safe dating and healthy sexuality; creating safe environments in our schools and workplaces with a zero tolerance for sexual harassment of any kind; promoting social norms that protect against sexual violence; and providing support and treatment for those who have survived sexual violence to lessen the harms.