Our April pick for the PBS NewsHour-New York Times book club “Now Read This” is Julia Phillips’ “Disappearing Earth.” Become a member of the book club by joining our Facebook group, or by signing up to our newsletter. Learn more about the book club here.

More than a decade ago now, I started to dream of writing a book set in Russia’s Kamchatka Peninsula. That region, 4,200 miles east of Moscow, is one of the most beautiful places in the world. It hangs off the edge of the country into the Bering Strait. It’s packed with volcanoes, geysers and natural wonders – I couldn’t wait to go.

Looking at pictures made my heart ache. I tried to pour that ache into the book.

When I arrived in Kamchatka for the first time in 2011, I learned it was even more spectacular than I’d imagined from a distance. Getting to live there during that year-long research trip and a second visit in 2015 was the great opportunity of my life. As I worked on the manuscript for “Disappearing Earth,” I kept revisiting photographs of the peninsula, remembering places seen and people met. Looking at pictures made my heart ache. I tried to pour that ache into the book. 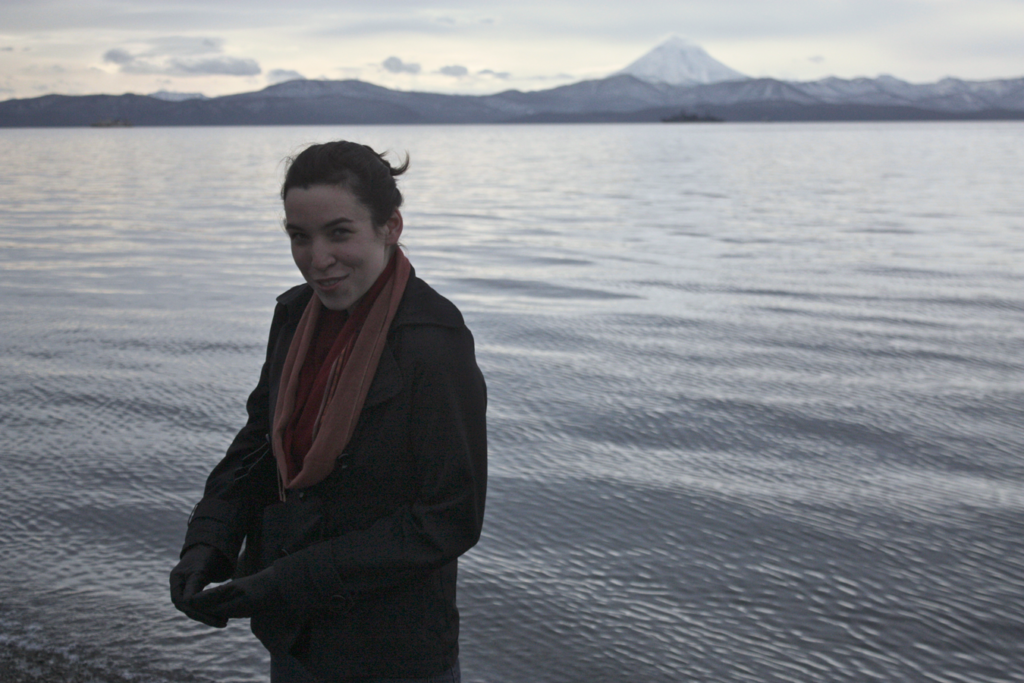 This picture was taken barely a month into my time on Kamchatka. In it, I’m facing the heart of the region’s capital city, Petropavlovsk-Kamchatsky; the city is built around a bay, and its center – municipal buildings, offices, a theater, a statue of Lenin – is set right on the shore. The first chapter of “Disappearing Earth” takes place in this same city center along this shoreline. The book’s first few paragraphs include a line that the water “was calm, barely touched by ripples that made the bay look like a sheet of hammered tin.” That hammered-metal detail came from memories jogged by photos like this one. 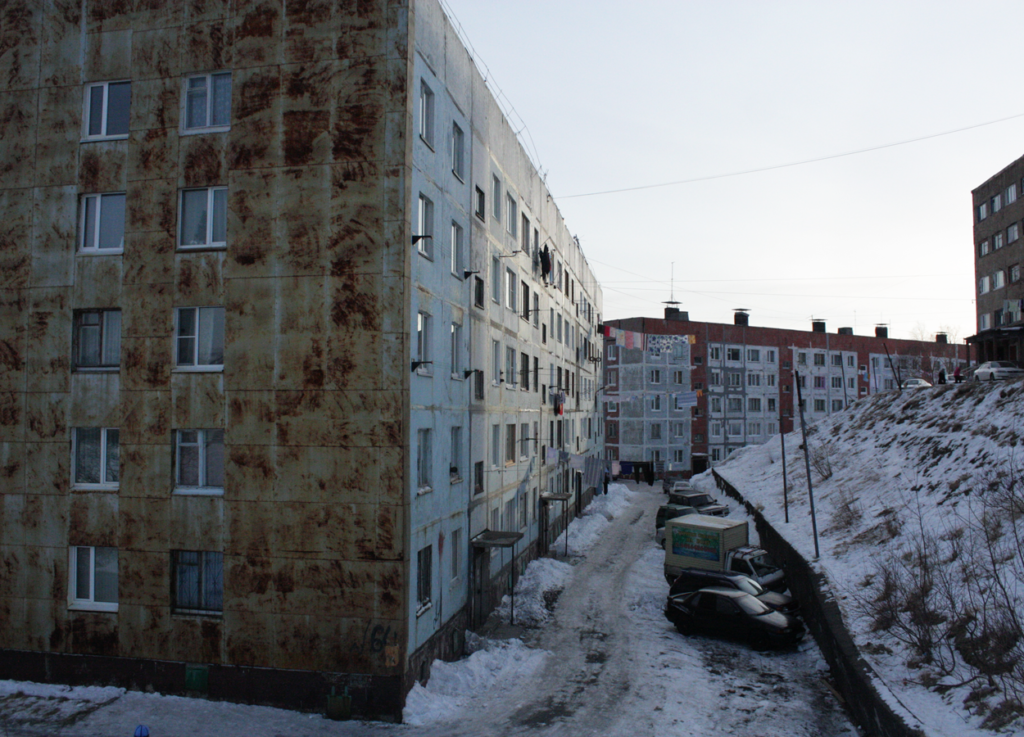 A street in Petropavlovsk-Kamchatsky. Photo courtesy the author

Petropavlovsk-Kamchatsky is where most people in Kamchatka live. It’s where infrastructure, resources and power on the peninsula are concentrated. The book’s second chapter describes the city in more depth:

Though “Disappearing Earth” starts there, its narrative spirals out to cover much more territory… 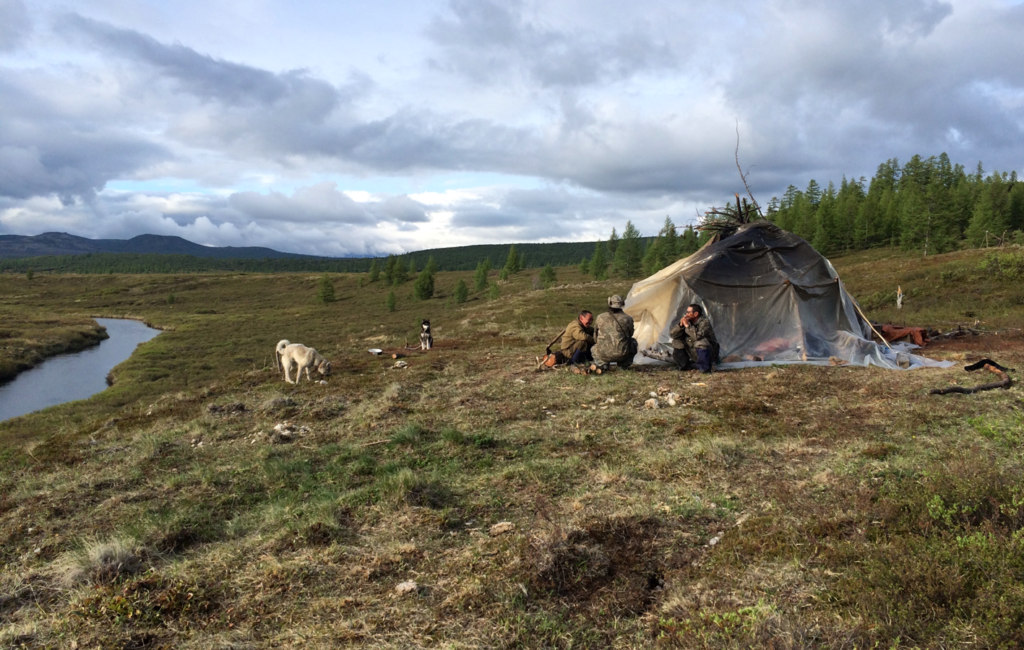 Reindeer herders resting outside the village of Anavgai, in Kamchatka. Photo courtesy the author

…Including central Kamchatka, which is more valley and tundra than urban shore. This photo is of reindeer herders resting at their camp outside the village of Anavgai. People have been herding reindeer in Kamchatka for thousands of years.

One of “Disappearing Earth”‘s characters is the daughter of a herding family and has sharp memories of school vacations spent in camps like these:

“In early summer, the herders drove the deer closer to the village, so the animals could graze on mosses only thirty kilometers from home instead of three hundred. All the same, to reach them, Ksyusha’s family had to ride on horses for hours through plains and mountain passes. When she was little, her parents tied her to the saddle with a rope around her waist, and every time she nodded off on her mare’s wide back, her father yelled her name to startle her awake. The sun moved above them as they repeated that routine. At ten years old, she graduated to holding her own reins. The horses aged, their paces slowed, but the tundra kept the same shrill degree of emptiness.”

She remembers sleeping on horse blankets inside her grandparents’ yurt, “smelling the day’s sweat with fresh crushed grass trapped underneath.” 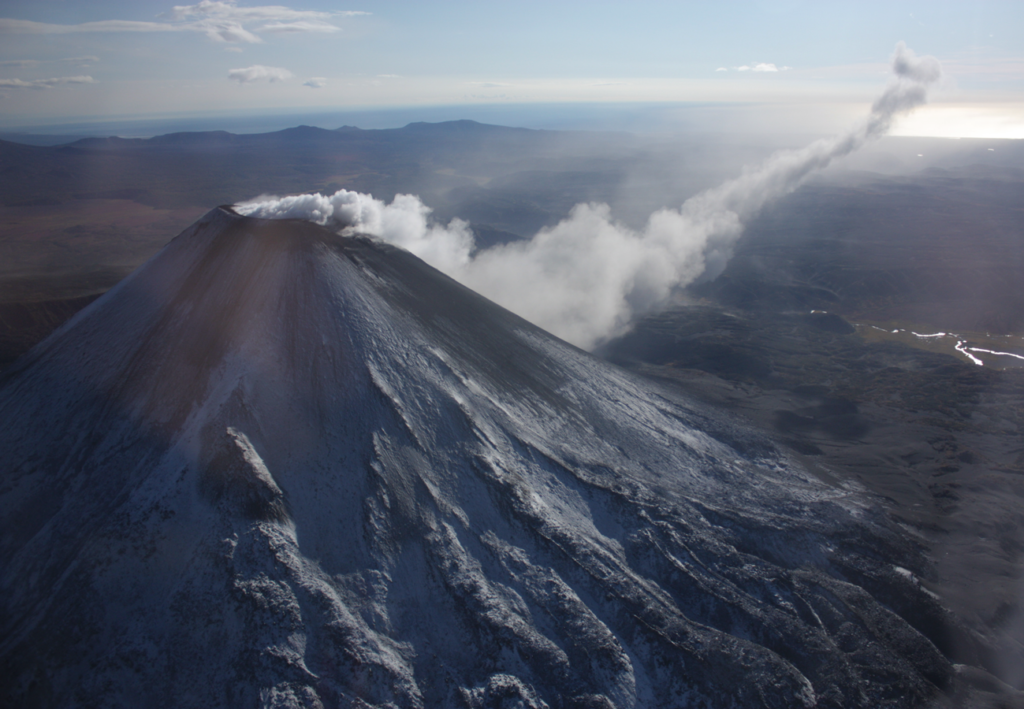 The Klyuchevskaya stratovolcano in Kamchatka. Photo courtesy of Julia Phillips

Since “Disappearing Earth” came out, I’ve had the incredible luck of getting to talk about the novel with people who’ve read it. Sometimes people ask if any characters or scenes are based on real people or times from Kamchatka. My answer is no, but a qualified no. Fiction writing for me is a quilting together of ideas, feelings, experiences both actual and pretend, news stories read, stories overheard…it’s based on reality in the same way dreams are based on reality, where your sleeping mind grabs an image and a person and a location then mixes them all together with your imagination to make something entirely new and strange. In real life, for example, I had the opportunity to visit the Kronotsky Nature Reserve, an enormous protected swath of Kamchatka. I was a tourist there, but in the novel, I made one character a Kronotsky tour guide, so she could have her own view of that place:

“If she boarded the bus to the park office, she would make it there to surprise them all in the middle of their lunches. The building would smell like it always had, that mix of paper, rags, and bleach. The eco-education girls would kiss her cheeks and the park director would come over to squeeze her hands. They might say, ‘Zoyka! What perfect timing. We’ve got an extra spot for you on today’s trip.’ A flight over the Klyuchevskaya stratovolcano–a helicopter to South Kamchatka Sanctuary.”

That character might, like I did, see a volcano view out a helicopter window, but she would see it with very different eyes. Looking back on these pictures as I worked on the manuscript was painful because I missed Kamchatka so much, but it was also joyful because I got to imagine, and then write down, what other people’s experiences might be.