‘Shame takes our bodies away from us’: Read an annotated page from ‘The Power’

Our March pick for the PBS NewsHour-New York Times book club Now Read This is “The Power” by Naomi Alderman. Become a member of the book club by joining our Facebook group, or by signing up to our newsletter. Learn more about the book club here. 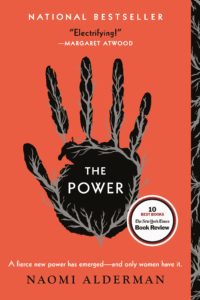 “The Power” by Naomi Alderman. Courtesy of Little, Brown & Company

In “The Power,” novelist Naomi Alderman imagines a world in which women develop a special superpower — the ability to send out painful electric shocks — that gives them physical dominance over men and sometimes leads to violence.

Though the novel was written years before the #MeToo movement, some of its pages explore what Alderman describes as “the sense that someone can do something to you that might stay with you forever and they perhaps don’t even know that they did it.”

But in Alderman’s topsy-turvy world, it is the women who more often inflict that on men. In one haunting scene, a girl uses her superpower on a boy after he tries to kiss her, which makes him feel both excited and ashamed. His shame over the incident, Alderman writes in the novel, is “like rust working its way through his body.”

“Shame takes our bodies away from us. I can’t say it more clearly than that,” she explains. Read more of what Alderman was thinking in her annotation of that scene below. (Click on the yellow text to see the annotations.)

The sensation grows, steadily and swiftly. At first it is pinpricks in his hand and forearm, then a swarm of buzzing prickles, then it is pain. He is breathing too quickly to be able to make a sound. He cannot move his left arm. His heart is loud in his ears. His chest is tight.

She is still giggling, soft and low. She leans forward and pulls him closer to her. She looks into his eyes, lined with lights of brown and gold, and her lower lip is moist. He is afraid. He is excited. He realizes that he could not stop her, whatever she wanted to do now. The thought is terrifying. The thought is electrifying. He is achingly hard now, and does not know when that happened. He cannot feel anything at all in his left arm.

She leans in, bubblegum breath, and kisses him softly on the lips. Then she peels away, runs to the pool and dives, in one smooth, practised movement.

He waits for the feeling to come back to his arm. She does her laps in silence, not calling to him or splashing water at him. He feels excited. He feels ashamed. He wants to talk to her, but he is afraid. Maybe he imagined it all. Maybe she will call him a bad name if he asks her what happened.

He walks to the stall on the corner of the street to buy a frozen orange drink so he won’t have to say anything to her. When the others come back from the beach, he falls in gladly with plans to visit a further cousin the next day. He wants very much to be distracted and not to be alone. He does not know what happened, nor is there anyone he could discuss it with. When he imagines asking his friend Charles about it, or Isaac, his throat clamps shut. If he said what happened, they would think he was crazy, or weak, or lying. He thinks of the way she laughed at him.

He finds himself searching her face for signs of what happened. What was it? Did she mean to do it? Had she planned, specifically, to hurt or to scare him, or was it just an accident, involuntary? Did she even know she’d done it? Or was it not her at all but some lustful malfunction of his own body? The question chews at him. She gives no sign that anything happened. By the last day of the trip she’s holding hands with another boy.

There is a shame like rust working its way through his body. He thinks over that afternoon compulsively. In bed at night: her lips, her breasts pressing against the smooth fabric, the outline of her nipples, his absolute vulnerability, the feeling that she could overpower him if she wanted. The thought of it excites him, and he touches himself. He tells himself he is excited by the memory of her body, the smell of her like hibiscus flowers, but he cannot know for certain. The things are tangled together now in his mind: lust and power, desire and fear.