In Marcus Samuelsson’s new cookbook, the chef pays tribute to Black women who have been the “backbone of American food.”

Among the restaurateurs he names is Leah Chase, the culinary legend whose famed Dooky Chase’s Restaurant in New Orleans opened in the 1940s, at a time when the city’s segregation laws made it illegal for Black and white customers to dine together. The restaurant, which she helmed with her husband Edgar “Dooky” Chase II, also became a meeting place for civil rights leaders and their allies — and later, fed creole cooking to Presidents George W. Bush and Barack Obama. (Samuelsson’s cookbook recounts how Chase smacked Obama’s hand after putting some hot sauce on his bowl of gumbo. “Don’t mess up your gumbo,” she told the president.) 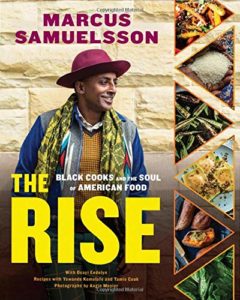 Chase also wanted to offer Black customers a spot to not only enjoy the foods they loved — that famous gumbo, chicken Creole with jambalaya, among other dishes — but to provide an “elegant, dignified experience of enjoying good food and company. A little panache,” Samuelsson writes in “The Rise: Black Cooks and the Soul of American Food.”

“Dooky wasn’t just about the food,” he told the PBS NewsHour.

Samuelsson, who calls Chase a “driving force” in his own aspirations as a chef, recounts in his book how he reached out to the legendary chef a couple weeks after Hurricane Katrina made landfall 15 years ago. He asked whether she had intended to close the restaurant following the storm’s destruction. The restaurant had flooded with about 5 and a half feet of water inside. “I lost everything but the art on the wall,” Chase told NOLA.com, recalling the aftermath.

Chase’s answer wasn’t to close. It was to rebuild. She ran her restaurant for another 14 years, cooking up until her death at 96 in 2019.

This is a major part of Chase’s legacy, Samuelsson said: “[W]hat it means to have ownership and be in the community and of the community.”

Samuelsson said Chase pushed him to aim high and to work within the community. He said the “bones” of Dooky Chase and one of his own restaurants — Red Rooster in New York — are similar in that they employ folks from the area.

He also said Dooky Chase has a “four-wall experience” he tries to emulate with his own restaurants: art, food, hospitality and music.

Samuelsson pays homage to the Queen of Creole Cuisine in his cookbook.

Another recipe in his cookbook — one for soup joumou, a dish culturally significant to Haitians — was criticized this week for the way it was published online by food magazine “Bon Appétit.” Traditionally a dish based on squash, the recipe listed sweet ingredients for a soup that was savory, a point on which several commenters pushed back.

After the backlash and calls of cultural appropriation, Bon Appétit has since then renamed the recipe and apologized for “misrepresenting” the recipe. The recipe explains the historical context around soup joumou and says that the “Pumpkin Soup With Spiced Nuts” recipe is Samuelsson’s take on the historical dish.

For his part, Samuelsson posted an apology to Twitter, saying he was “deeply sorry” to the Haitian community.

“I am continuing to absorb the response to our misrepresentation of a culture I so deeply admire and will work to do better in the future,” he wrote.