Our August book club pick for Now Read This, the PBS NewsHour’s book club with The New York Times, is Daniel Nieh’s “Beijing Payback,” a fast-paced thriller about a young man whose discovery upon his father’s death of his involvement in a vast crime syndicate leads the protagonist on a journey to tie up loose ends with his father’s former associates back in China. 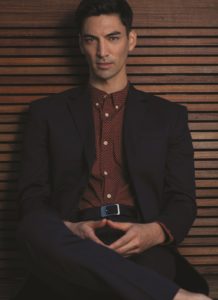 College student Victor Li had, for most part, led a comfortable life until his father’s sudden passing, with a comfortable home, good friends and a passion for basketball. But upon the learning that his father’s work involved more than just running a restaurant chain, his understanding of his family begins to change. In Beijing, Victor confronts decades-old grudges, violent spats, and a shocking new enterprise that his father’s organization wants to undertake. He also begins to better understand the sacrifices made by his father, who lived in China during its leanest Communist years before immigrating to the U.S.

June Now Read This author Lauren Wilkinson, in a review for The New York Times, called Nieh’s book “a propulsive first novel that aims to entertain” while considering larger themes of identity and privilege.

“The money earned from the brotherhood’s illicit activities in Beijing is the reason Vincent was able to build an idyllic life for Victor and his sister in California,” writes Wilkerson. “Victor grapples with the moral implications of this with the convincing clumsiness of a sheltered 20-something.” Throughout the novel, Nieh, who is a Chinese-English translator, offers examples of oft-repeated advice from Victor’s father, reminding him of “all he has inherited culturally and emotionally.”

Nieh will join us at the end of the month to discuss “Beijing Payback.” We hope you’ll read along.