YA literature has more LGBTQ characters than ever. Here are 5 books to read

It's the 50th anniversary of the Stonewall riots this month, when members of the gay community fought back against a police raid on what was then one of the few queer-friendly bars in existence — the Stonewall Inn in New York City's Greenwich Village. The bar was a gathering place for young gay and trans people, and the days-long violent protests became a major turning point in the fight for gay liberation.

To mark the anniversary, the PBS NewsHour asked the New York Public Library's Caitlyn Colman-McGaw, manager of young adult programs, for recommendations of some of her favorite gay YA books. On view now at the NYPL is "Love & Resistance: Stonewall 50," a free exhibition that provides an intimate look at how LGBTQ culture has transformed — both before and after the 1969 Stonewall uprising — through images, memorabilia and ephemera.

"Fifty years after the Stonewall riots, the world of YA is full of fascinating queer and trans characters," wrote Colman-McGaw. "This explicit representation on the page is relatively new — and we in the book world still have work to do to ensure all readers see themselves on the page."

But, she wrote, the world of YA is "finally giving LGBTQ+ teens the literature they deserve."

In her own words, here are five of her favorites in LGBTQ young adult literature.

1. "If I Was Your Girl" by Meredith Russo 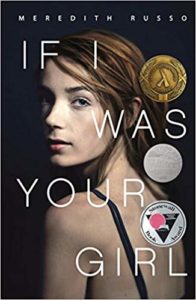 Amanda Hardy is the new girl and things are going exactly as you'd imagine — she's got a solid gang of friends and a crush on the very cute Grant. Amanda worries that acknowledging she is trans will ruin all of her new relationships — a fair concern in a world consumed by bigotry. Thankfully, Amanda's friends surprise her but not always in the way she expects. Come to this book for the great writing and compelling characters, but stay for the inspiring friendships.

Russo's latest book, "Birthday," which also features trans characters, is out this month.

2. "Aristotle and Dante Discover the Secrets of the Universe" by Benjamin Alire Sáenz

Sáenz's writing is so gorgeous his books live in your heart. Ari is struggling with his own anger when Dante, a nerdy dude who is also weirdly confident, comes into his life. As their friendship turns romantic, the two boys learn about themselves in ways both touching and relatable.

3. "When the Moon Was Ours" by Anna-Marie McLemore

A lusciously written exploration of what it's like to invent yourself and how we protect each other. Miel and Sam both don't fit in, but the love between them runs deep. The magic in this story creeps in as effortlessly as the roses that grow from Miel's wrists. If you're looking for immersive, ethereal writing with beautiful, trans characters, McLemore is the writer for you.

4. "I Wish You All the Best" by Mason Deaver 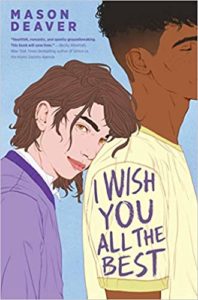 Ben De Backer is one of the first non-binary characters to grace the pages of YA, as a main character anyway. After coming out to their unsupportive parents, Ben struggles to manage their anxiety disorder in a chaotic environment (and let's be honest, when is high school not chaotic!?). When they meet the adorable Nathan Allan, Ben's senior year seems to be looking up.

Sometimes it takes a while to figure out who you want to kiss, and for Amanda it takes a while to feel right. But that doesn't stop her from valiantly, and often messily, trying! Along with her newfound understanding of her sexuality, Amanda has to grapple with growing up and discovering a family secret that will change the way she sees her loved ones. (Editor's note: This is a graphic novel.)

READ MORE: Looking for a good book? Here are 8