CAMBRIDGE, Mass. — On a quiet residential street close to Harvard University, there’s a wood-shingled house that’s easy to miss. Save for some funky-looking angled awnings around the windows, it’s pretty nondescript. But its simplicity belies its ambition. Welcome to HouseZero, which claims to be the most energy-efficient building in the world.

Ali Malkawi, a Harvard professor of architecture and technology and the founding director of the Harvard Center for Green Buildings and Cities, designed HouseZero. When asked about the name, he chuckled.

“Because there are a lot of zeros,” Malkawi said. “The house doesn’t use almost any energy for heat and cooling. It doesn’t have any electrical light during the day. The building does not have a carbon footprint, including the amount of energy throughout the building materials.”

The energy it takes to heat and cool a building takes up nearly 40 percent of energy used across the world, according to the Center for Clean Air Policy. It’s a troubling figure as climate change threatens human habitation in many places. Malkawi is trying to change not just how much energy a building consumes, but how much it produces.

The Cambridge house he designed has no lights, no heating or air-conditioning system, and barely a utility bill. While most homeowners or tenants would rejoice over the idea of never having to pay a heating bill, the goal of HouseZero is to produce more energy than it will ever consume. Using the concept of passive design, windows automatically open if it starts to get a little warm or stuffy (they can also be opened manually). When the temperature dips outside, a solar chimney keeps the inside temperate and fully ventilated. 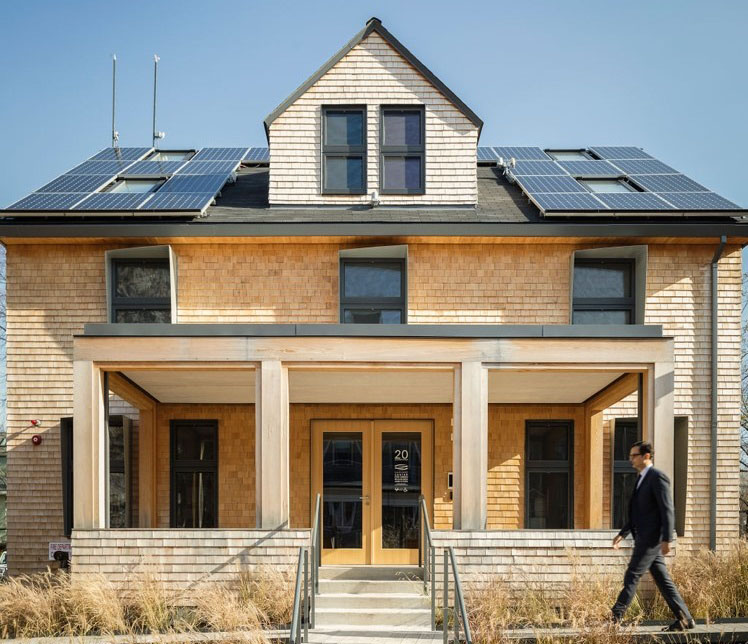 The exterior of “HouseZero,” which is located outside of Boston. Photo courtesy of Harvard Center for Green Buildings and Cities

Passive house design has been around for a while, with roots in Sweden and Germany. Its design principles are based on taking advantage of the climate outside of the house by using solar energy, superinsulation and constant ventilation. The goal is to maintain a comfortable temperature inside while greatly reducing the need for additional heating or cooling. It has gained popularity throughout Europe and more recently in the United States, where there are certification standards. Massachusetts even has its own passive house organization.

Michael Knezovich, communications manager for Passive House Institute US, a Chicago-based organization that set the passive building standard and certification in North America, said passive building construction has exploded in the past two to three years.

“As recently as 2012, we had 12 fully-certified projects, and all but one were single-family homes. Now there are hundreds. The most dramatic growth has been in apartment buildings and high rises,” Knezovich said.

While it may be easier to find passive homes and buildings in the Pacific Northwest and New York, Knezovich described Boston as a small hotbed with several passive building projects in the pipeline.

The Passive House Institute provides training for architects and builders. Knezovich said in the days before passive building construction started to ramp up, contractors were wary because of the potential liability.

“We realized that we needed to develop a training for builders, and they were very receptive,” Knezovich said. “It requires a little more precision and a little more care, and a lot of builders were looking for projects like that because there’s a greater sense of satisfaction.”

While the goal of passive buildings is high performance, some may call it the gateway to zero net energy design, meaning a building that only consumes as much energy as it produces on-site.

Ian Bowles, managing director of Windsail Capital Group and former Massachusetts secretary of energy and environmental affairs, said when it comes to new construction, the zero-energy home is where the state should be heading, but it’s a matter of getting the market to catch up.

“Ten to 20 years from now, no question, the building code should require zero energy,” Bowles said. “But retrofit is the biggest challenge. It’s cost-prohibitive. That’s a threshold for a lot of folks.”

In 2008, Massachusetts passed the Green Communities Act, making it a nationwide leader in environmental legislation. The Stretch Energy Code went one step further. Municipalities that adopt the stretch code require new home construction to meet a rating target on the HERS (Home Energy Rating System) index. The state Board of Building Regulation and Standards reports that250 municipalities have adopted the Stretch Code as of November 2018.

HouseZero incorporates both passive and zero net energy design. But Malkawi wanted to take that a step further and create a “positive energy” house that ultimately will send some power to the grid.

Very little energy is needed to run the house, but solar panels on the roof are used to power the heat pump and equipment, like computers. During the night, the house switches to solar-powered batteries. A geothermal pump is also available as a backup system.

All of this simple, natural design also involves really smart technology, which for a house originally built in 1924, made for a challenging renovation. The retrofit included extra thick cement flooring wired with cooling tubes and a highway of cables and sensors capturing data like air flow, temperature and CO2 levels. What’s behind the walls and beneath the floor can be seen wearing augmented reality goggles.

No one actually lives in HouseZero. Malkawi describes it as a “living lab” where students and researchers can learn about the relationship between buildings and their environment. The 17 million data points captured in-house every day are pulled into a giant database. They inform the system’s algorithms about any changes inside and outside the building. Basically, the building is learning how to respond not only to weather forecasts but also the behavior of its inhabitants.

Malkawi hopes that the information gleaned from HouseZero will prove that ultra-efficient buildings like this one are scalable in any climate.

WGBH is a public media station located in Boston, Massachusetts.