MEXICO CITY — What does it sound like to look for a lost loved one? This art installation doesn’t look away from the horror and pain of that reality.

At University Museum Contemporary Art in Mexico City last year, multiple speakers wrapped visitors in a sonic collage, recorded from a group of civilians, made up of mostly women, who search the desert for “clandestine graves” of missing loved ones.

That work, called “V.[u]nf_4”, is the latest in a series of sound pieces by Luz María Sánchez that address the “unnecessary force” and everyday violence that affect many Mexicans.

In the past 13 years, as Mexico’s war on drug cartels ramped up, so did the number of the civilians caught in the crossfire. According to the Mexican government’s latest official count, at least 61,637 people have been reported “disappeared” over decades, with 97 percent of those cases stemming from 2006 onward.

One “cannot just close your eyes to reality.”

In the search for drug war victims who went missing, officials have found more than 3,600 clandestine graves. But journalists and activists, many of whom find the government’s response to the violence inadequate, have cautioned that the numbers don’t fully reflect the scope of the devastation.

Sánchez’s sound work immerses visitors in that bitter context. As an artist, when it comes to Mexico’s violence and disappearances, Sánchez told the PBS NewsHour that one “cannot just close your eyes to reality.”

“When I was growing up, it was very normal to be in the middle of a shooting when you were driving to work,” Sánchez said. Her own father was killed at their home in 1982, when she was 11.

Visitors to Sánchez’s installation can select which sound collage to have echo through the gallery space, but all of the options include the audible crunch of footsteps and the metallic clangs of shovels hitting the dirt. Sánchez said there are also “modified fragments” of Krzysztof Penderecki’s musical composition “Threnody for the Victims of Hiroshima.” There’s also laughter.

An audio excerpt from Sánchez’s sound installation, provided by the artist, which she called a “fraction of the experience.” Sánchez and her assistants Josué Martínez Alcántara and Fernando Gonzalez Buenrostro captured field recordings of a civilian group searching for mass graves in the desert to produce a “construction of immersive sound.”

Sánchez said that, while shadowing the civilian search group Las Rastreadoras de El Fuerte, or The El Fuerte Trackers, what caught her attention was the bond among group members as they searched for the mass graves. Despite the pain they carried, there were moments of levity that isn’t necessarily expected of families of victims of forced disappearances.

How do these women survive within this life of extreme violence? That was one of the main questions Sánchez said she wanted to answer. “Their loved ones are taken away, and we don’t know if they’re dead or alive.”

Mirna Nereida Medina Quiñones, founder of Las Rastreadoras de El Fuerte, told Sánchez in 2019 that they are compelled by two main, “painful” questions: Where? And why?

In the installation, there are also five steel “T” rods that lay nearby in a row. In their searches, the group spikes the rods into the ground, and then they smell the tips for the stench of death — possible human remains — before digging. 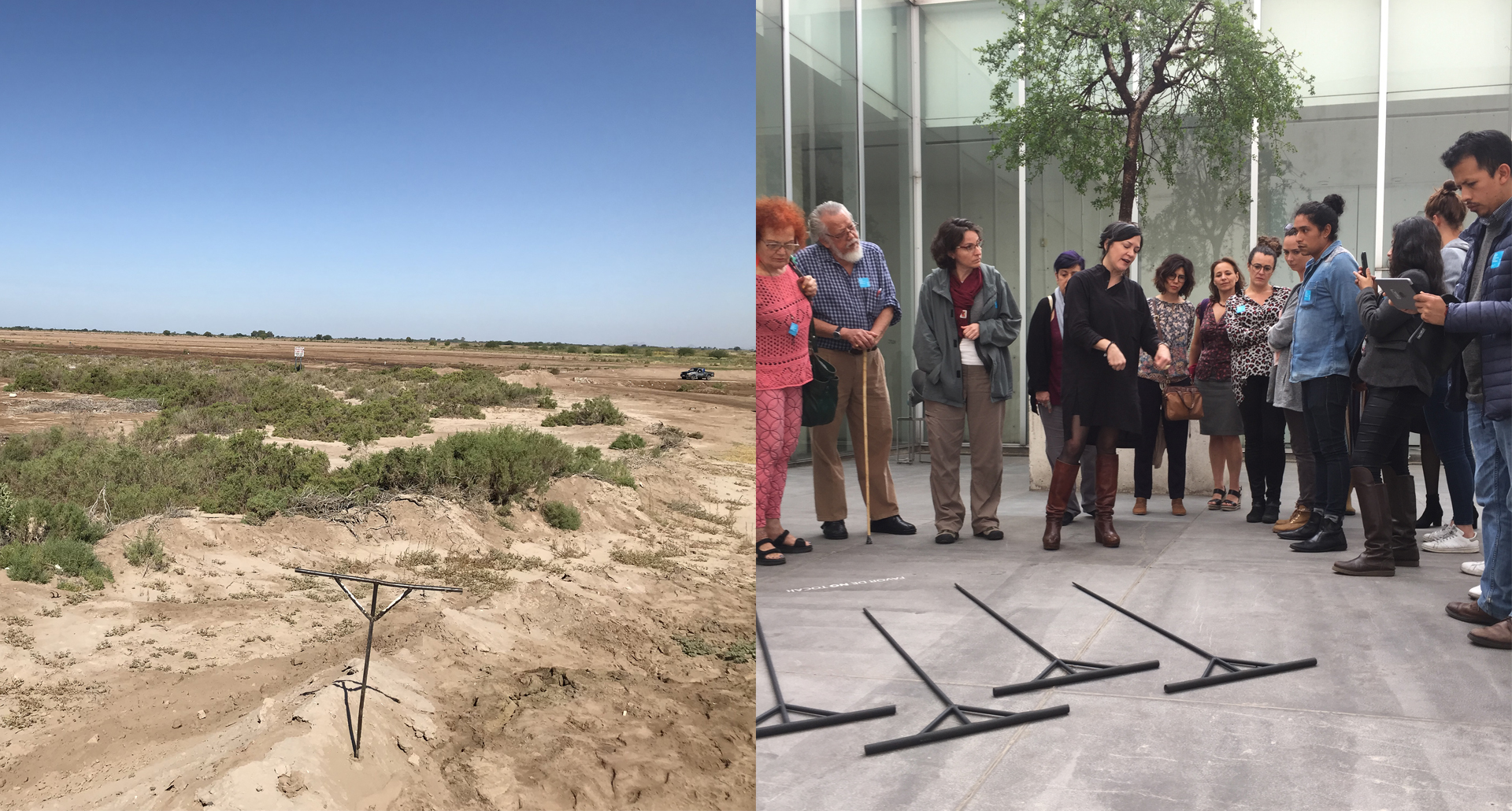 On the left, a “T” rod is seen in the desert. In the right photo, Sánchez speaks to a group of visitors to the exhibit about the rods. Photos courtesy of Luz María Sánchez

Sánchez also isolates one woman’s voice saying, “Look, there’s a bone” — whether human or animal is not immediately clear.

In another moment, someone observes, “Poor Chulis, look at her crying.”

Sánchez said these women are often working in the desert “with almost zero support from the government or any other group,” and that part of her goal with this installation, which will be shown at the 2021 Venice Biennale, is to build empathy for them.

Sánchez spoke with the PBS NewsHour’s Jeffrey Brown about why sound is her chosen entryway into this issue, how she seeks to build empathy, and how the piece, in a sense, is still a work in progress.

The idea here is to use sound. Why sound? What about it interests you?

I was trained as a musician, and I work in cultural radio stations in Guadalajara. And even though I work with video and visuals and sculptural elements, I really think that the sound is something that you feel with your whole body. So even though we may come to a museum or gallery and see things and try to understand what it is, when you have sound, it’s something that goes beyond, maybe, [the] logical aspect of the work, and works in a different way because it works through your body as well.

Now these are very specific sounds. Tell me what these sounds are.

The sounds are the voices and interaction of a group of females mainly. There’s a couple men in the group as well, but mainly the sound of a female when they are interacting, going out for a search outside of Los Mochis in Sinaloa state, a northern state in Mexico. They do this kind of a different spot search for corpses of other family members that were taken away, either by police forces or by cartels.

And so what we hear is: When they get out of the car, when they are getting their tools — and all these kind of jokes, and this kind of a personal interaction among them — and then we hear them, on spot, digging in certain spaces and the interaction among them, what they find. Some of them didn’t find any bodies, but they were talking about finding some bones that, at the end, were animal bones and things like that. So, that’s the kind of sound that we hear through this 8-channel installation.

So the idea is to take me or the visitor into the experience.

In my case, I’m sharing with the visitor this particular sound that I found when I was going with them for another project. So I was visiting them several times, like once a year, for three years. I traveled to Los Mochis. We were doing this application for them to use. And I went with them to these searches because the app has to be used on spot. So it was very important to see how they interact in the desert, like they arrive as a group and then they disperse, et cetera.

What took my attention the most was the fact that even if they are looking for their loved ones, there is this kind of a very emotional, kind of a family sense of union, even though we know what they’re looking [for], and what’s the activity they’re going to do that day.

Very painful, because they may find their kids, their sons or daughters. But this other part: a very humane, almost like a group of sisters together in the desert. It took my attention, let’s say. And that’s why that’s the kind of sound I wanted to bring to the museum, not the other sound that people may expect, which is they saying the name of their kids and trying to create awareness about that. But the other part, the human part, I think that was what I wanted to share with the public here in Mexico City.

But why? I mean, why sort of bring us into that experience through sound?

I think when you go and follow these groups of women, they are mainly doing this by themselves with almost zero support from the government or any other group. You find that the thing that is missing as a society is empathy. But how do you build empathy? That was one of my main questions. First of all, how they survive within this context of extreme violence because their loved ones are taken away and we don’t know if they’re dead or alive.

It’s very real for them.

But second, how do you make other groups of citizens in Mexico to understand and maybe have some empathy with them. And it’s difficult because they do demonstrations, they go to media, they give interviews. But us, as a society, maybe because we are trying not to get bold emotions, we try to think about them as different groups. “Not me. This is not going to happen to me. My kid is in my house.” So how do you build empathy? And I found that by bringing these sounds here, those sounds — and not the other ones that are calling to your brain to understand the dimension of the tragedy — but the other ones, the other ones are calling to your heart, may be the option. And it seems like it worked, at least for the feedback I had when this was on exhibition all during last year.

Everything you just said could be for a nongovernmental advocacy group. It could be for journalism. Why is art the way in?

You may record the same sounds as I do, the same videos that I did. But when you construct all that data into something that is more emotional-driven, that’s a difference. Because then, the person will go out and look for more information, but he already felt this kind of sound environment that you will not build through journalism nor academia, a paper, nor other media. It’s a feeling, a sensation, because sound really hits into your body and takes you beyond people imagining the digging and everything and the voices. When we had the public close their eyes and they may imagine the whole scene. And this is something that you will not get through journalism or academia, a [scholarly] paper.

I still think there are people that would wonder, though, why is this art? Why is this in a contemporary art museum?

For the experience, it was, I will say, a success in the sense that people will go out really thinking about what these women are doing in the middle of the desert, even though they didn’t have any image to relate to.

For example, one of the persons working for the missing people in Mexico with the federal government, one of the comments she made was that the sounds in [the Mexican state of] Coahuila are different than the sounds of Los Mochis. And I didn’t know that because I haven’t been there. And the reason is because in Coahuila, the cartels and police alike or military, they do not bury the dead bodies, they disintegrate the bodies through acids. So family members, they go in. They go with this kind of tools where they put the earth on top of it and start doing this — they call it in Spanish cernidor — so they do the shh, shh, shh until they get little pieces of bones or something. So she told me the sounds are different. You should go and record that, she told me. And then she said that maybe in Veracruz, since it’s this muddy kind of thing, it’s a different sound. She was giving me ideas of expanding this artwork because she found it really compelling in terms of feelings. You will never think about that.

READ MORE: How this light installation connects strangers across the Mexico-U.S. border

Why poems can be safe spaces during the pandemic

Why poems can be safe spaces during the pandemic