The 'melee' of Jan. 6, through a photographer's lens

On Jan. 6, 2021, photographer Nate Gowdy was at the U.S. Capitol on assignment for Rolling Stone when what was billed as a pro-Trump rally escalated into an insurrection. He was on his way to take photos of the rally at the Ellipse when groups of people started walking toward the Capitol.

Hours later, Gowdy writes in his new book, he was "caught in a melee of war cries, adrenaline and suddenly surging bodies."

After covering the mayhem outside the Capitol, Gowdy faced his own chaotic situation days later. His camera and computer with his Jan. 6 images were stolen from Washington's Union Station.

"I would have sacrificed an arm or a leg to get those photos back," he said.

Beyond capturing a shocking chapter in American political history, the images were also meant to be the conclusion to a book he had been long working on.

As friends tried to console him and help him replace his equipment, one acquaintance had a lucky, one-in-a-million break, spotting his original gear for sale online, and eventually reuniting him with his images.

"Insurrection," a recent collection of 124 of Gowdy's photos, offers a timeline of the day's events through vivid portraits of the Trump supporters who broke into the complex while Congress counted Electoral College votes to confirm President Joe Biden's 2020 election victory.

More than 950 people have been arrested for participating in the Capitol insurrection, the Justice Department reported Wednesday — two days ahead of the attack's two-year anniversary. Hundreds of demonstrators and law enforcement officers were physically injured. The Capitol building sustained $1.5 million in damage. Eighteen journalists were assaulted and news equipment and cameras were damaged, according to the U.S. Press Freedom Tracker. Nine deaths have been connected to the attack and its aftermath.

"Almost four years prior to Jan. 6, 2021, I stood in the audience at the Inauguration Day stand and stared in disbelief as [President-elect Trump] vowed to uphold the Constitution and to end the specter of societal 'American carnage,'" Gowdy said. "Now I found myself in the space – one historically reserved for solemn and dignified assembly – as it was flooded with true American carnage."

Gowdy has worked since 2011 as a photographer for various editorial and commercial clients. He has also produced exhibitions and projects, including "The American Superhero Project" – a series of patriotic portraits featuring people of all stripes – and "Our Students, Their Stories: Celebrating LGBTQ+ Students, Families, and Staff," a project commissioned by Seattle Public Schools.

Trump rallies became a focus of Gowdy's work in recent years, he says in an attempt to better understand the movement. "I wanted to make photographs that could help us bridge this divide potentially. And now I see that because, again, we see what we want to see, they [my images] only perpetuate the divide, certainly with the climate we're in. That's not what I set out to do, but that's what it's become."

The PBS NewsHour spoke with Gowdy by phone and email over the last few weeks about his experience covering the Jan. 6 attack and what led to his new book.

This conversation has been edited for length and clarity. Some of the photos featured in this story are graphic.

I'm curious how you came to be on Capitol Hill on Jan. 6. What led up to that?

Time magazine had reached out after I photographed a Bernie [Sanders] rally here in downtown Seattle being interrupted by Black Lives Matter demonstrators. … And that kind of gave me the confidence to get out there and do it. … I ended up getting the Bernie Sanders cover of Time magazine in June of 2016. … At the time, I'd only had a camera for four and a half years. So that was pretty cool.

The whole time I was out there traveling, self-funding these trips to primary states, sleeping in rental cars and doing what I had to do just to get the photos while this was happening. I thought the whole Trump-MAGA thing was a blip and I thought I had to catch it then and it would be over soon. And, you know, it didn't end…

I saw Jan. 6 as Trump's last stand. Excuse my language, but I knew it would be a stupid day. … I didn't anticipate it being deadly and what it was.

How did you come to be on Capitol Hill on Jan. 6?

I was actually kind of running late that morning on getting to the rally. And so I had a good walk to get there. And so I was walking toward the Ellipse and I was on the National Mall, just past the Capitol, when I encountered a gang of militiamen.

I had a decision to make. I could go where every other member of the media probably was, which was at the rally in anticipation of Donald Trump. Or I could go in the direction of what I saw as potentially being the big story.

These radical militants – it was like it was as if they were ditching class early. It's like everything was happening in the direction I was walking at the Ellipse, and they're walking in the opposite direction in loose formation, chanting "f*** Antifa" over and over to a sparsely populated National Mall.

Did you ever go inside the Capitol at any point during the day?

No, I did not. … Everyone on that terrace where the inauguration platform [was on the West Front of the Capitol] had their backs to us. And so there was obviously something going on behind them. And that's where the battle for the tunnel was. And that's why I got to a higher elevation to have a view of it. But I didn't want to be in the middle of it.

I didn't have any protective gear, whereas a lot of my colleagues out there that day were militarized – wearing gas masks, goggles, helmets, boots, kneepads, you name it. But that also worked to "other" them, … whereas, I was wearing a maroon hoodie and Carhartt beanie and, besides my N95 mask and cameras othering me, a lot of people who were suspicious of me couldn't be 100 percent certain I wasn't a fellow "patriot" for the cause.

You were able to kind of blend in a little bit.

Yeah, I think in ways that worked to my advantage. But, that said, I was still attacked twice that day for having cameras.

How have you been since that day? How has what you saw affected you? Are you doing okay?

A lot of people care about me and ask that question a lot. And my response is that I don't feel like I have any lingering trauma from that day. A whole lot of people do. And I'm just fine.

The trauma I experienced regarding that day didn't have to do with the danger and the chaos or the events of Jan. 6. They had to do with on my way back to Seattle – … my camera, my computer and my photos were stolen. I'd just witnessed and photographed the most historic thing I've been to. And suddenly that was all gone, but for the 25 medium-res JPEGs I delivered to Rolling Stone.

Tell me about that.

This book's photos were almost lost. On Jan. 8 at Union Station, my backpack–in it, my camera, hard drives, and laptop–were stolen. If not for the sleuthing efforts of an acquaintance, this book would not exist. Just two days after the theft, he found my camera listed on an online marketplace. I messaged the seller that it was unmistakably my Leica Q and laptop. Silence.

So close yet so far from recovering my things and particularly these images, I boarded my flight home to Seattle. Upon landing, I learned that the seller wanted me to call them. Over the phone, they claimed that they had "found" my backpack. "Praise be to God," they exclaimed, for putting us in a position to help each other–as they attempted to extort $2,000.

Very fortunately, they agreed to return to the scene of the crime for the exchange the following day at Union Station with my friend. Amtrak Police officers went above and beyond to work with him to arrange a safe and successful sting operation. For a multitude of reasons, I didn't press charges. The detained individual was banned from Union Station, but didn't spend the night in jail.

What gave you the idea for a book?

I've been a photographer since I got a camera in 2011, and I've always been kind of pretty obsessed with photo books. Photography is the only thing that I let myself collect and get materialistic about. And so I've always kind of done long-form documentary projects in anticipation of curating the archives into books. And I've just never had the means to do that. And so I've wanted to do this for a long time. …

What spurred me to do this one was my ex-partner's parents. When I met them, they're very Trumpian. I love talking politics, but I tried to redirect away from politics with them. But when I mentioned, you know, I was there at the Capitol on Jan. 6 at the insurrection, her father threw a fit and made a scene at the restaurant we were at – at just me calling it an insurrection. That's when I got the idea that, "Wow, people need to see this. They need something they can hold in their hands and point to and say, 'Yes, this happened. Look, here it is.'" 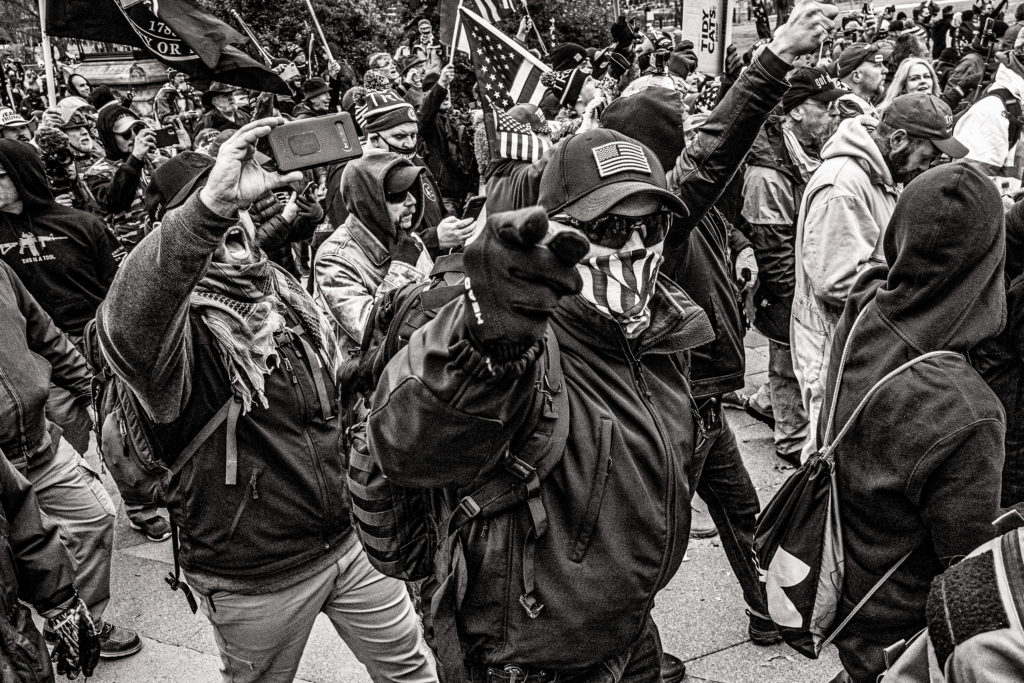