NEW ORLEANS — A new exhibit that recently appeared at the Newcomb Art Museum in New Orleans forces us to engage a side of society normally out of sight: the lives of incarcerated women.

Until last year, Louisiana was the prison capital of the world. The state incarcerated one out of every 75 adults. According to a 2016 report by the Vera Institute of Justice, 80 percent of the women in the prison system are mothers. Additionally, 82 percent of women are in jail for nonviolent offenses. Women in jail are also disportionately black and Latina. Regarding the incarceration of women, former U.S. Attorney General Loretta Lyench has said, “When you incarcerate a mother, you actually incarcerate a family.” 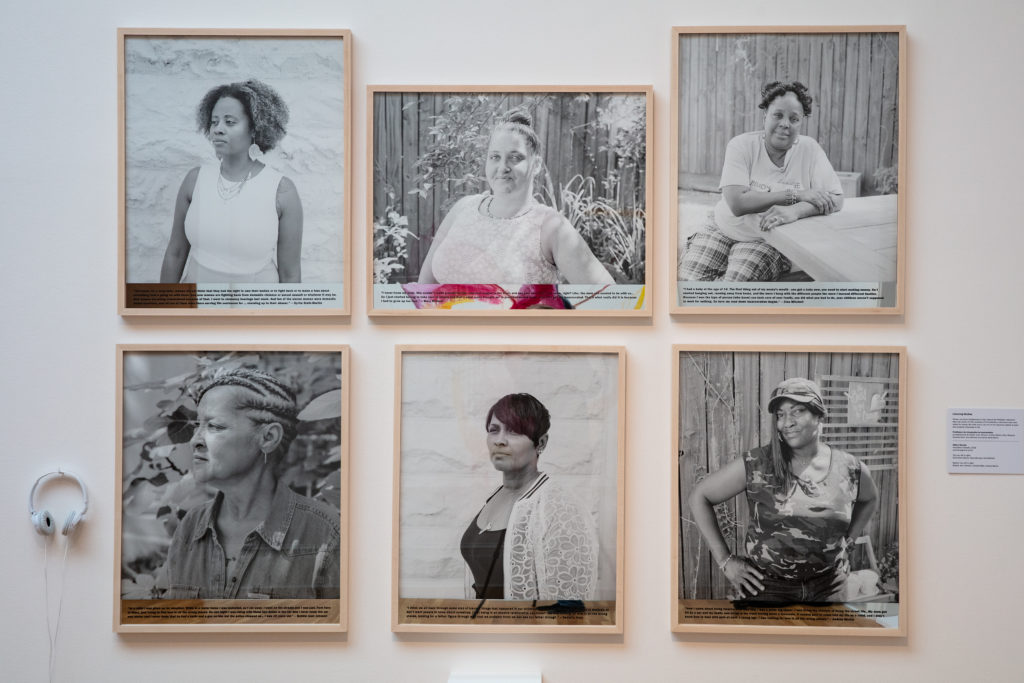 Portraits of the “PerSisters” by Allison Beonde. Photo by Jeffrey Johnston, courtesy of the Newcomb Art Museum of Tulane University, New Orleans

For Dolfinnette Martin, being a parent was the “hardest piece of being in prison.”

“Every day, I worried about my kids, every single day,” she told LPB’s “Art Rocks,” adding “my crime isn’t who I am.” 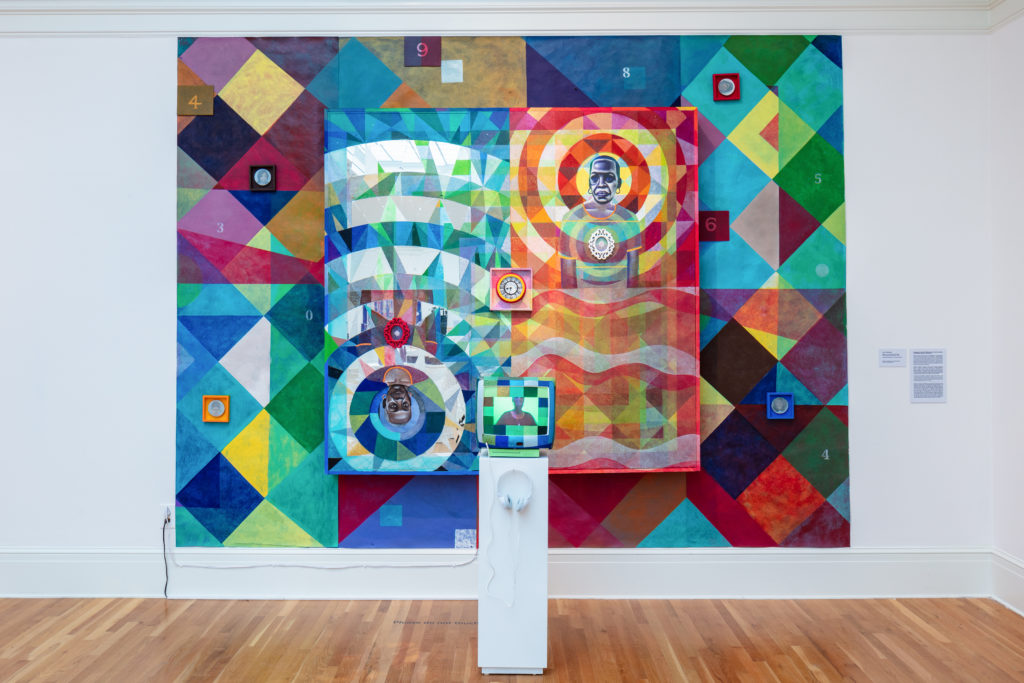 “Whispers to God, Being Here When Women Need Me to Be Here!” by Carl Joe Williams is inspired by the story of Dolfinette Martin who’s formerly incarcerated. The artwork includes video testimony from and a mosaic portrait of Martin. Surrounding the mosaic portrait of Marton are smaller vignettes of other incarcerated women. Photo by Jeffrey Johnston, courtesy of the Newcomb Art Museum of Tulane University, New Orleans 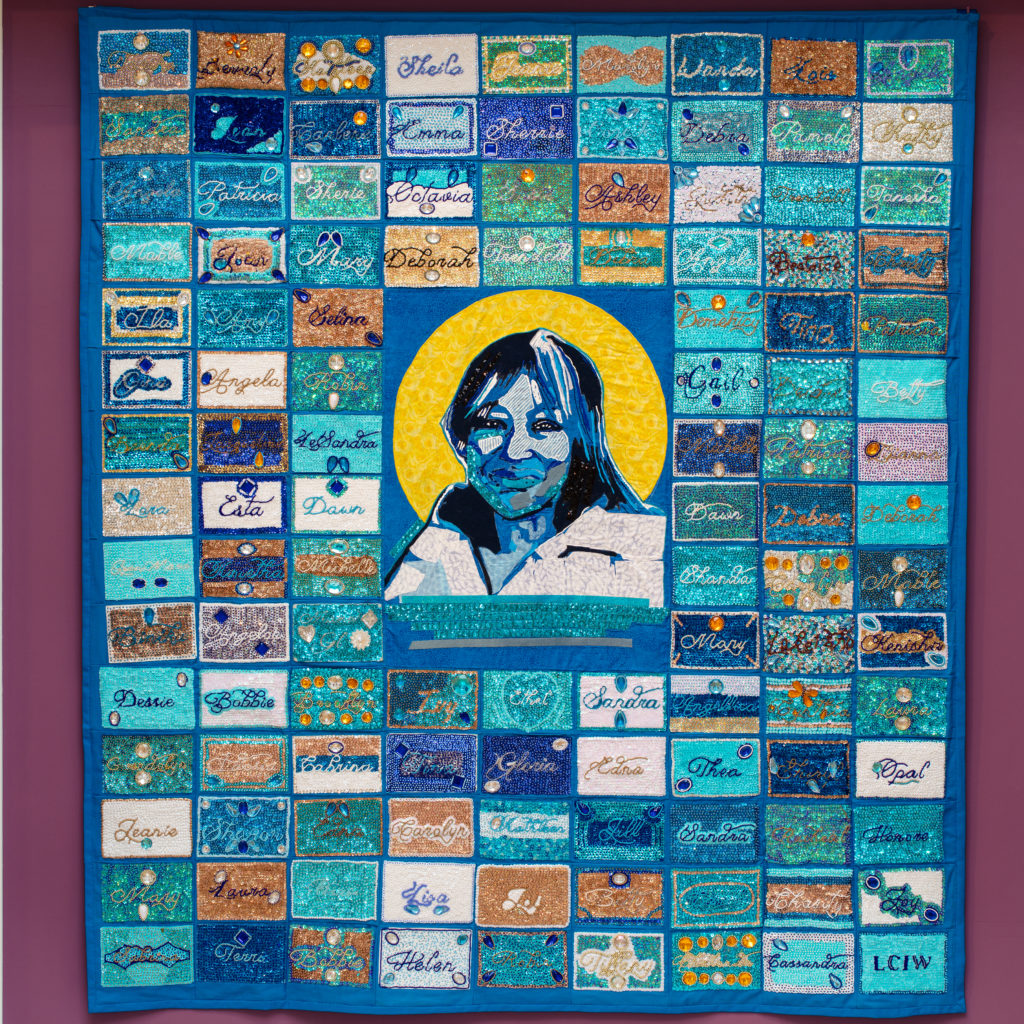 “The Life Quilt” (2018) features the names of 107 women serving life sentences in Louisiana in 2017. The quilt was compiled by Selina Anderson of the Louisiana Correctional Institute for Women (LCIW) Drama Club. Photo by Jeffrey Johnston, courtesy of the Newcomb Art Museum of Tulane University, New Orleans

To illuminate these women’s experiences, curators at the Newcomb Museum connected artists with current and former inmates to create the traveling exhibit “Per(Sister).” They went out and interviewed 30 formally incarcerated women in the community and documented their stories. The museum then asked 30 artists to interpret these women’s stories through various mediums of art.

“Art is a very benign, safe vehicle to talk about things that we may not talk about with our families, we may not talk about in our communities,” the museum’s director Mónica Ramírez-Montagut said, adding that the exhibit is “informally educating the community about the issues around incarcerated women and to build better empathy and understanding on the root causes for the high incarceration rates in the state.

The exhibit is expected to travel to other cities this year.

LPB’s weekly series "Art Rocks!" explores the broad spectrum of art in the state of Louisiana.