The Capitol made out of gingerbread? You butter believe it

Like many of us, members of Congress and their staff are probably looking for a sweet escape from the rush of deadlines, debate and difficulties that come this time of year.

This year’s display — which is an estimated 3 feet tall and 5 feet long — features more than 30 gingerbread characters. Those inside the gingerbread structure don frosty face masks, while some outside are without masks. At least 15 feet of LED string lights, a couple of Nutcracker characters and a giant gingerbread Christmas tree round out this year’s confectionary construction.

Fred Johnson III, the senior area manager of food operations for Sodexo in the House of Representatives, and his team first built the Capitol gingerbread model in 2017. While they produced the model this year in less than a week, it took a lot longer to start from scratch four years ago. At the time, a vice president at Sodexo asked Johnson if the staff could pull off a simple gingerbread house to display inside the Capitol. No one in the Capitol had ever constructed a gingerbread model of the building in its two centuries of existence.

“Me being me, I don’t just simply do a gingerbread house that you would do, on display, on a small table, in an area of the dining room,” Johnson said. “The first year took me the longest. I lost a lot of sleep trying to figure out, ‘How in the world do I do a replica of the Capitol?'”

So he started testing recipes. Johnson said for a large gingerbread display, the key is having a durable cookie that will hold up.

The biggest challenge, however, was constructing the Capitol’s iconic dome out of gingerbread. For that, Johnson used a mixing bowl and Rice Krispies treats.

“When you make molds, you use Rice Krispies treats. It’s a great filler,” he said.

Once he freezes the sticky treats, he pops the mold out of the bowl and then forms the gingerbread dome over top. After a complex process of freezing the dome, cutting out its windows, freezing it again and baking it, the Rice Krispies-marshmallow mold is carefully removed before the gingerbread dome is baked again to hold the shape.

After the dome is done, it’s on to the structure and the theme of the display. The latter has changed over the years. In 2019, a train track circled around the gingerbread Capitol to mark the 150th anniversary of the completion of the Transcontinental Railroad.

While the sweet Capitol replica has displayed history, it’s also been a part of history. Photographers captured House Speaker Nancy Pelosi walking past the model on the same day the body voted to impeach then-President Donald Trump in December 2019. Jordan’s King Abdullah II was on the Hill during the model’s debut year in 2017 and got a photo next to it. 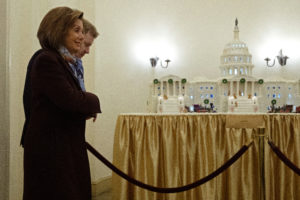 WASHINGTON, DC – DECEMBER 18: Speaker of the House Nancy Pelosi (D-CA) walks past a gingerbread model of the U.S. Capitol as she arrives at the capitol alongside her Press Secretary Drew Hammill December 18, 2019 in Washington, DC. The House is scheduled to vote on two articles of impeachment against President Donald Trump later in the day. (Photo by Chip Somodevilla/Getty Images)

In order to bake, mold and construct the model each year, the team needs an eye-popping number of ingredients. In 2019, 175 pounds of gingerbread, 110 pounds of icing and 18 pounds of butter were all used to build the model.

When the Capitol gingerbread model is transported to its spot in the Capitol, “you realize you’re moving something that weighs a few hundred pounds,” Johnson said.

In 2020, Johnson moved the construction of the model to his own home because of the COVID-19 pandemic, and displayed it there, too, posting pictures of the process on Facebook and on a website.

This year, Johnson wasn’t sure if there was going to be a gingerbread model because the Capitol is closed to the general public due to the pandemic. But, he said, people kept asking whether the sweet smell of gingerbread would be back this year.

People were searching for it, Johnson said, “and you can tell who they were because they were very joyful when it was done.”

Johnson said the team’s frosted, sweet-smelling creation is now part of the Capitol’s holiday tradition. “I’d like to hope that it’s there 100 years from now,” he said.

Members of Congress, their staff, and journalists working in the Capitol, as well as guests with official business, have until Jan. 3, 2022 to see the model in the building before it is disassembled. 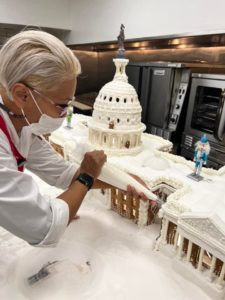 Stephanie Charns, a pastry chef who volunteered to help with the 2018, 2020 and 2021 gingerbreads, said the goal of the project is to bring people in the Capitol — including the people who worked on the model — back to their Christmas memories.

It’s about letting “people go back to their childhood and have these aromas,” she said. “You just take that moment and you breathe in the cinnamon, and you think back to when you were a kid. That’s the motivation because, for anybody in hospitality, that’s the whole thing — you’re there to make somebody else happy.”