An artist in China works on a print. Image by 心奕 (Cindy)
Arts & Culture

Urbanization profoundly impacts our livelihoods, ways of life and outlook, often for the better. But the benefits of life in larger cities — for many, upward mobility and more steady income — can also come with the loss of a rich rural or indigenous craft culture.

Seeing that strain inspired Rebecca Hui to start Roots Studio in 2016. The social enterprise aims to bridge the gap between native artists and customers across the world by “digitizing last-generation art into an online library” for royalty licensing.

Roots Studio partners with villages and uses uses high-quality scanners to upload artists’ designs to its online repository. Artworks can be ordered as gallery prints, stationery, or as patterns for brands to license and print on their own products.

What captivated her “was this inherent connection to material that wasn’t wasteful or just consumerist, but really reflected intergenerational heritage and identity.”

The company has digitized more than 3,000 indigenous designs to date and works with around 20 communities worldwide. While most of these are in India, the organization has expanded to include displaced Syrian artists based in Jordan and has run pilot programs in rural China and Panama.

Hui’s journey began when she was an undergraduate at the University of California, Berkeley, where she took a course in “Global Poverty and Practice” and learned about India’s rapid urbanization and its mega metropolises like Calcutta and Mumbai.

Most Indians still live in rural areas (65 percent, according to 2017 World Bank data), but that is rapidly changing as people move to search for economic opportunities. Between 2011 and 2016, an estimated 9 million people a year migrated between different Indian states. And that trend is expected to continue — last year a publication funded by the Indian government informed investors it was preparing “for the biggest human migration on the planet.”

Hui said she became “fascinated” with this process and moved to the state of Gujarat for a summer when she was 19 to work for a landscape architect and get a better understanding of this mass movement. When she returned to the U.S., she was “so attached” to questions of “rural and urban transitions” that she decided to apply for a Fulbright fellowship to conduct her own research in India.

Crisscrossing the country for her research project (a study of human-animal conflict and interaction in the context of the transition from rural to urban areas), Hui observed first-hand the sustainable practices of rural, agrarian villages. Without access to mass manufacturing, people made everything they owned using sustainable materials, custom fit for each purpose. 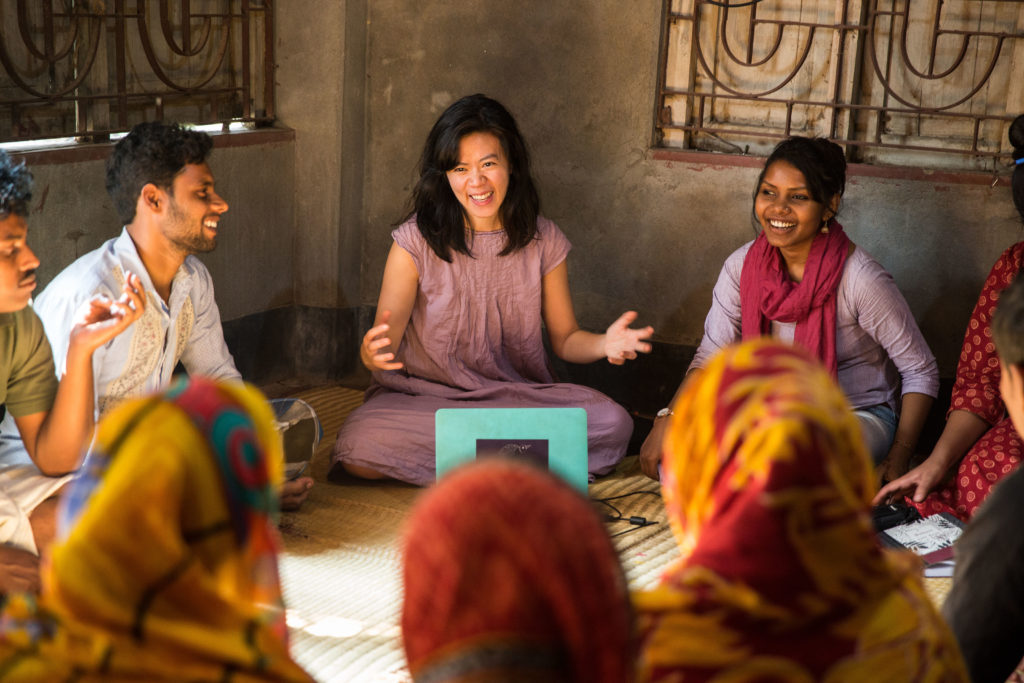 What captivated her “was this inherent connection to material that wasn’t wasteful or just consumerist, but really reflected intergenerational heritage and identity,” she said. For example, the women in one village she visited made their own clothing, designed to be a narration of their life stories.

And yet artists who wanted to make a living were forced to move in order to access metropolitan art markets, or they sold their wares through fair trade handicraft markets that were only able to pay makers 2 to 3 percent of profits.

Hui wanted to know whether it was possible to “support the local economy of the village and make that prosperous enough so that it could be an alternative to migration,” she said.

“We are losing a lot of the core culture and traditions of what makes India what India is.”

Through each license, Roots Studio reports that it is able to return significantly more profits than otherwise available–providing a sustainable source of income while preserving artists’ works. On average they return at least $100 per transaction to producers. In comparison, artists in one Indian community were receiving around 1,200 INR ($14) for each transaction in their local village and 2,500 INR ($36) in larger Indian cities. Hui was recognized for this model in this year’s Forbes’ 30 under 30 social entrepreneurs list.

Roots Studio tends to work with communities that are generally indigenous or rural and have a cultural heritage that stems from their physical environment, their history and their shared sense of identity. These groups are also “starting to see loss of people because of the lack of income,” Hui said. This means they are generally at an inflection point where, without intervention, their art practices may die out.

Himani More, a textile designer and one of a handful of contractors who work full-time for Roots Studio in India, said when the team first approaches a community, it focuses on building rapport. Once they’ve explained the company’s model, they run a series of feedback sessions focusing on understanding the local artwork and answers questions and concerns about Roots Studio’s model. It can be a challenge to get communities on board at the beginning, More said. To combat this, they consistently visit each community and focus on the needs and concerns of artists.

The team then gets to work sorting, selecting and digitizing artwork that would work best for Roots Studio’s online repository and a global market. More, who is from the city of Pune in Maharashtra, is passionate about the preservation aspect of this work.

“We are losing a lot of the core culture and traditions of what makes India what India is,” she said. 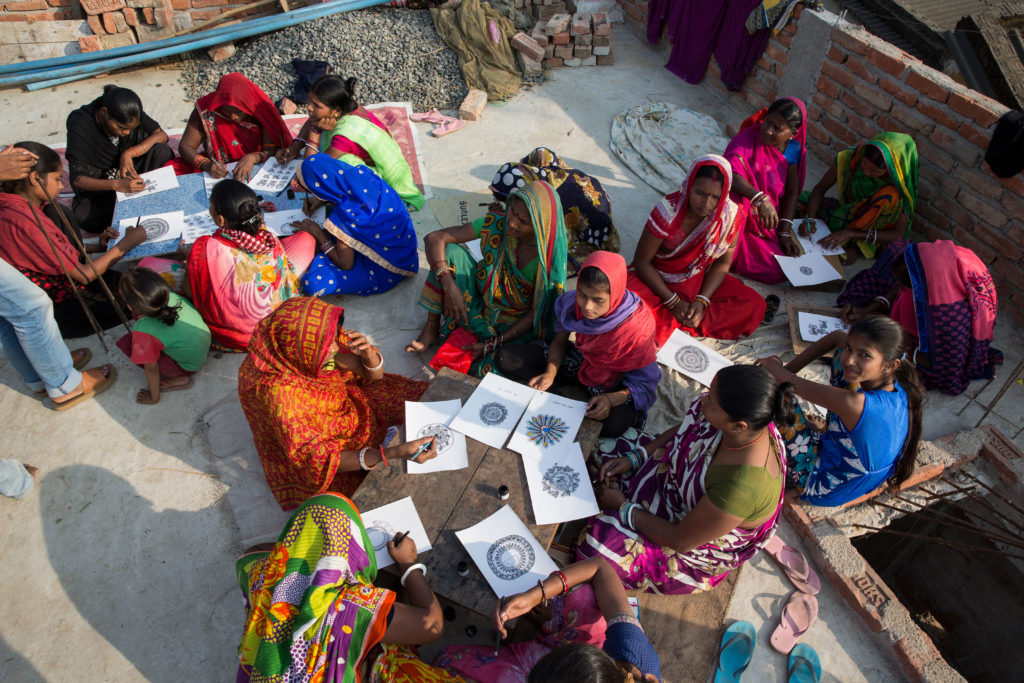 Half of Roots Studio’s gross profits go back into the communities it works with. “Our theory of change is that we can create a way that pays an income and a livelihood that makes these artists realize what they have is appreciated,” and that it can support “not only the artist but also the community as a whole,” Hui said.

Three-quarters of the returns from Roots Studio go toward the individual artist who made a sale. The rest is put in a communal fund for the village more broadly. That model pays back the contributions of the community beyond “the individualistic concept of artistry in the West,” Hui said. For example, some of the peoples the organization works with make their own paper and material for other artists to paint with. Other artforms require the accompaniment of a musician or a “pradhan,” a singer who narrates the story depicted in the artwork.

Communities vote on how to use their proceeds. Hui said one community chose to use this as a “participation fund” and divided it among artists who submitted work to Roots Studio but did not make sales. Another village used it to fix the water supply to their community. Where possible, Hui’s team also runs workshops for artists focused on surface pattern design knowledge, technology and financial literacy.

Hui herself is working to “aggressively” grow the market side of the business. In the past year, Roots Studio has partnered with several international brands including H&M, Tommy Bahama, PrAna and Outdoor Research. Hui said consumers can expect to see products with Roots Studio artwork in stores next year.