Jonathan Christensen Caballero (left) and Joann Quiñones are two artists and friends who explore complexities of identity within their respective bodies of art. Both use mixed media, such as ceramics and found objects, to explore these themes. Photos by Vicky Diaz-Camacho/Flatland and courtesy of Joann Quiñones
Arts & Culture Kansas City PBS Missouri

KANSAS CITY, Mo. — A face can tell a story — with a grimace, a smile, a crinkle of an eye, or even the texture of skin.

For friends and artists Joann Quiñones and Jonathan Christensen Caballero, faces tell complicated stories of race and class. Woven within the artists’ respective works are their experiences grappling with their own identities and the working-class histories of their families.

Quiñones and Caballero have solo exhibitions at Belger Arts in Kansas City, Missouri. Both artists use casted molds of the faces of family and friends as the core of their work, a method that’s helped them forge a deep bond as artists and friends.

“It feels like a really good metaphor for identity, right?” Quiñones said. “You pour this liquid, it’s shaped by the exterior plaster, the mold it hardens and then in the inside, there’s really nothing. It’s hollow.

“For me, that’s been a metaphor for my whole experience growing up.” 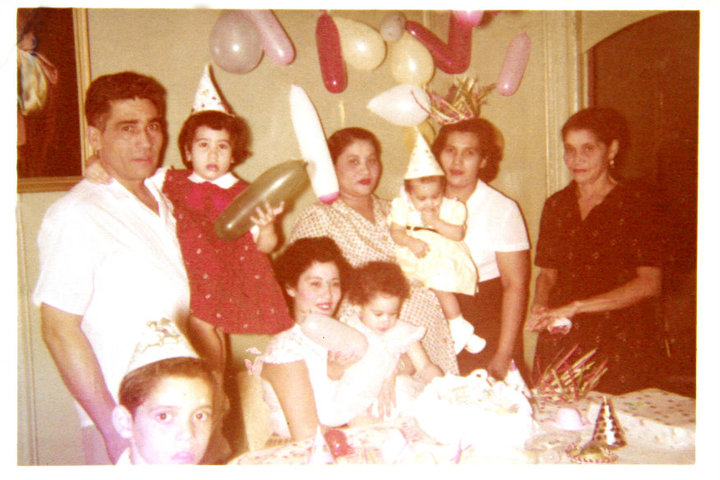 Joann Quiñones and family during a birthday party. Photo provided by the artist

Raised by her working-class parents in Brooklyn, she took the academic route and got a doctorate in literary studies. After that, she taught English for 17 years at Earlham College in Indiana.

But teaching at a liberal arts college didn’t satiate her passion for social justice issues. So she sought out a new vocabulary: ceramics.

As the descendant of a long line of sugar cane workers in Puerto Rico, she understands the fraught history of the U.S. occupation and its effects on the economics and labor on the island. So in 2015, fueled by her family history and her own experiences of racism, colorism and featurism — seeing how Afro-Caribbean children with lighter skin and Eurocentric features were favored, for instance — she sought to address those topics through her art.

“I learned a lot about racism, not from my outside experiences, but from within my own family,” she said. 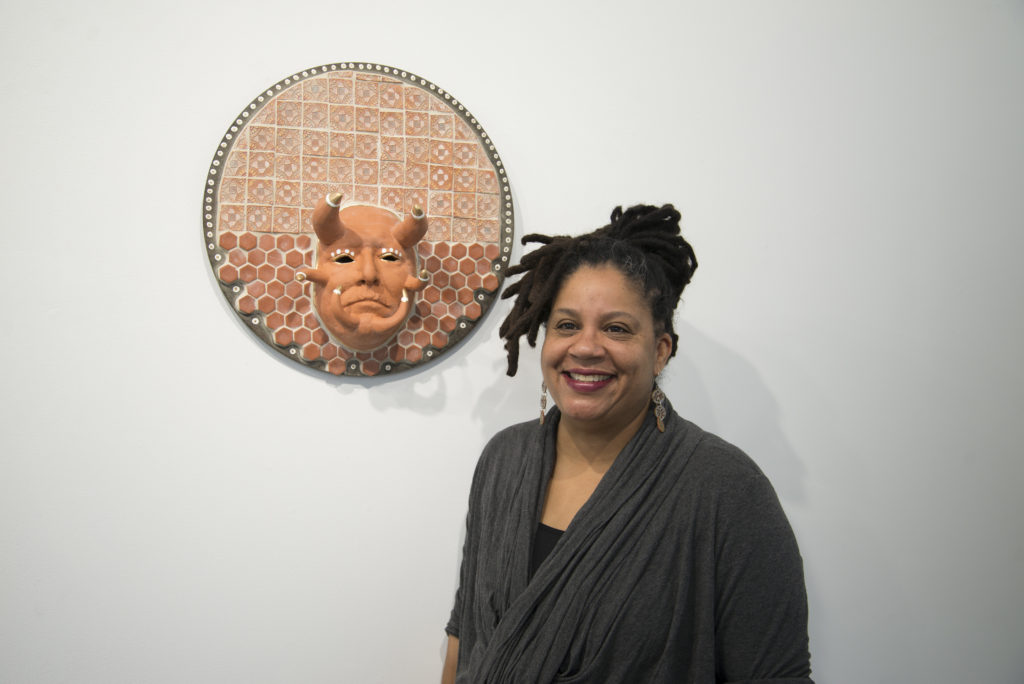 Quiñones stands in front of one of her pieces, “Vejigante Mestizo.” The vejigante – or demon face – is a staple in Spanish folklore and Puerto Rican Carnival festivals. Photo provided by the artist

Her work explores where these sentiments are rooted and how those histories inform present-day racial tensions, as well as the Afro-Latinx identity.

She added: “How do you use artwork to kind of go back and show people like, ‘Man, we have a really complex history.’”

For her, it’s all about education and reexamining historical implications on certain communities.

Her works’ titles carry with them certain meanings. Consider, for example, the word “mulatta,” a term for those with mixed white European and Black ancestry. Another word — “mestizo” — is referring to a person of mixed ancestry with a white European and an Indigenous background.

Many of Quiñones’ works reference styles, patterns and cultural iconography from Spanish, West African and Puerto Rican history. Pictured here, from left to right, is: “Exile,” “Lucia,” and “Toussant of Ward Avenue.” Photos provided by the artist

According to her website, some of her hybrid forms allude to “what it means to be both and neither – black, Puerto Rican, a citizen, a woman, and queer.”

Nearly life-size figures confront the viewer, drawing on aesthetic traditions from Puerto Rico, West Africa and Spain such as dress styles and tile patterns. Figures made of terracotta and porcelain, which are also ordained in voluptuous silk and cotton gowns, represent stories of sexuality, domesticity and, more specifically, labor.

These themes are also present in Jonathan Christensen Caballero’s work.

According to the Belger Arts, “his work focuses on the immigrant experience and gives visibility to the struggles of the working class, including Latin American laborers in the United States.”

His mother was an elementary school cafeteria worker who emigrated from Panama and his father, who is Danish, was an on-site mechanic. He remembers the confusion he felt as a kid living in Utah when he had to choose which box to check for race on a standardized test. The option was “white” and, in parentheses, “non-Hispanic.” 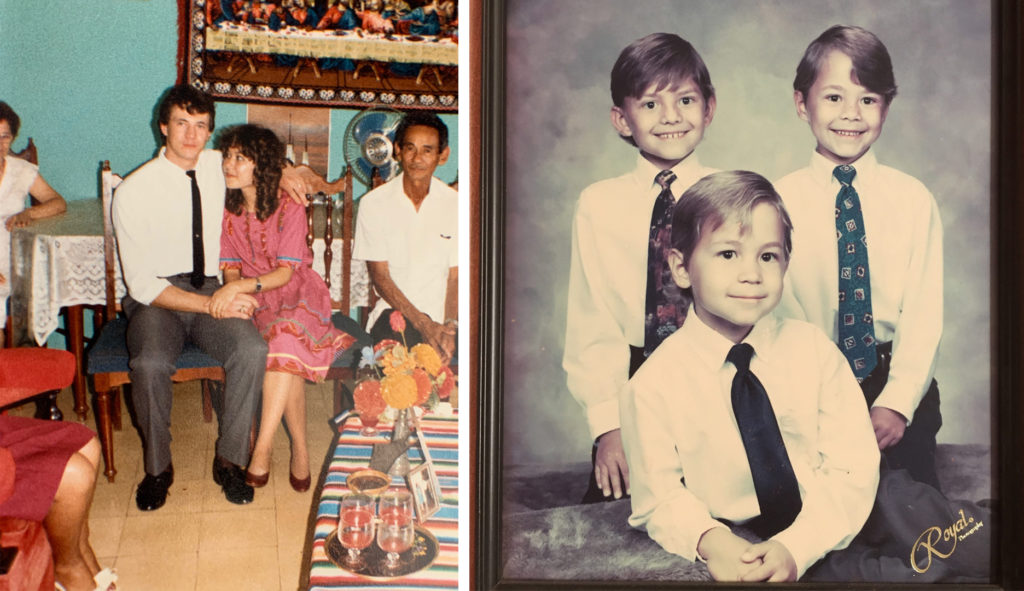 “For me, my own identity and my Latinx identity has been something that I’ve had to come to grips with because the labeling has changed,” he explained. “I’m equal parts of my mother and my father. And so it’s like, ‘So what am I?’”

This question and his parents’ working-class background informed much of what he explores in the figures on the Belger exhibit floor.

His figures employ the casts of faces and limbs, while the bodies are formed of second-hand thrifted material. Caballero cuts the clothing into strips, tying and knotting the pieces, many of which are a deep-blue indigo color. This is intentional, he explained, hearkening back to pre-industrial times when Maya civilizations used the pigment in murals. 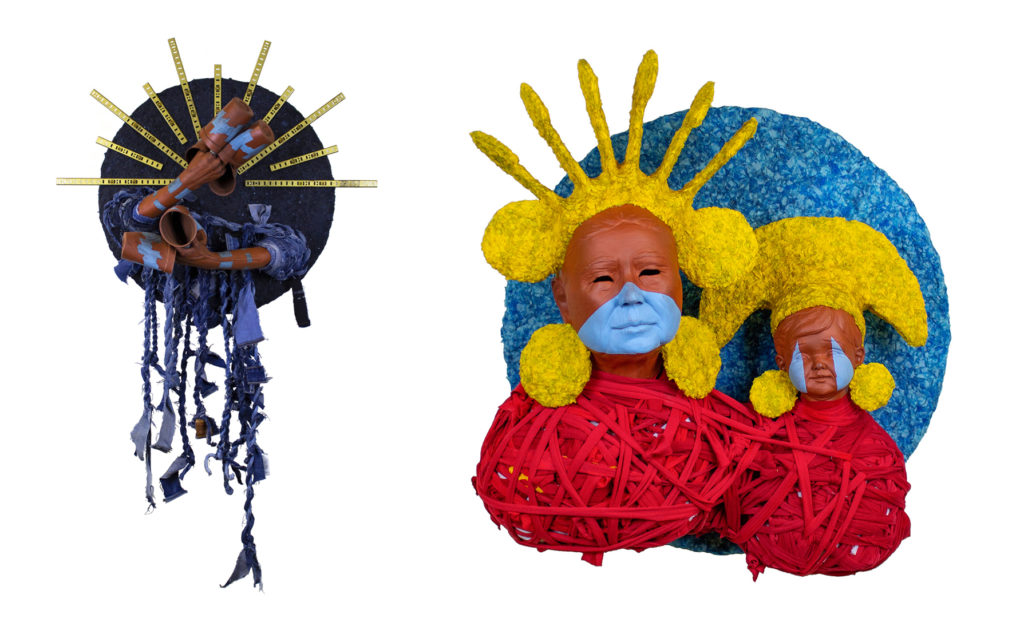 These repurposed materials are laid over mesh, which forms the rest of the body. The simple use of second-hand cloth is a comment on the labor industry, and on the laborers behind the clothes and other items used, such as Solo cups, and thrown out on a day-to-day basis.

The two artists met in graduate school, feeding off of each other’s histories and shared interest in pre-colonial art. While studying and collaborating, they forged a deep bond that’s physically present in both their works.

In fact, Caballero and Quiñones feature one another. They exchanged casts of their own faces and shipped the final pieces to one another. In a sense, it’s their way of cementing their similar lived experiences.

Jonathan Christensen Caballero holds a cast of Joann Quiñones’ face. Both he and Quiñones exchanged casts of their faces and mailed them to the other. These casts feature in each of their exhibits. Photo by Vicky Diaz-Camacho/Flatland

Quiñones uses terracotta, sometimes painted with bold, black pigments or starchy white. Her figures’ faces are accented with stripes of rich gold. The idea, she said, is to spark conversation about the legacy of slavery and stolen labor. And Caballero’s use of faded denim, shredded pieces of cloth and folded metals urges the viewer to confront what consumers value — or don’t.

In many ways, the two artists’ works are tools to spur dialogue about the sometimes painful truths of privilege, racism and economic influence on society at large.

They also share the same sentiment: the Latinx identity is often seen as a monolith but it shouldn’t be seen as such. They’re examples of the complexities found within the Latinx community.

However, they both value the camaraderie they found with one another as two Latinx people in predominantly white spaces, such as the art world.

It’s a message they want others to share, too.