How this artist is expanding the meaning of ‘feminism’

ALBUQUERQUE, N.M. — Many colorful lines rise and fall to form a mountain-like shape. Below all the swirling and connecting lines is a word in all caps: FEMINISMS.

Haley Greenfeather English, who painted the large mural, wanted to underscore how many different ideas about feminism exist.

“I’m trying to say that feminism is for everybody,” she said. “Everybody is a feminist.” 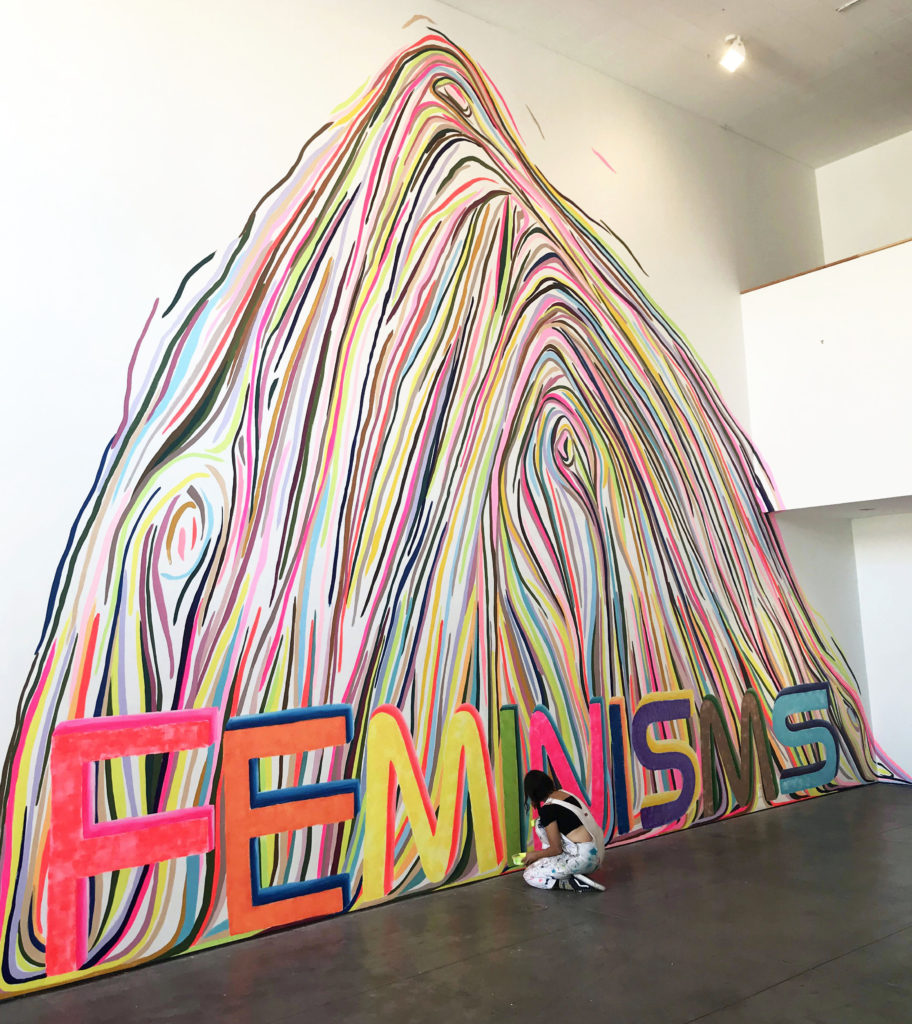 This was also the starting point of the piece and for the exhibit “Queer Indigenous Feminisms,” which intentionally added that “s” to the word. A partnership between 516 ARTS and the Wheelwright Museum of the American Indian in Santa Fe, the exhibit’s featured artists, whose work can be viewed online, wanted to treat feminism and its themes with a great deal of elasticity.

For English, an artist of Red Lake and Turtle Mountain Ojibwe descent, feminism through a queer and Indigenous lens is what resonates most. Her mural, with its many different colors and lines, is about all the different ideas about feminism coming together into one form. When she initially started sketching out the mural, it changed over time.

“It came in a million different forms,” she said.

“The word ‘feminine’ is in it, a matrilineal idea of women caretaking people, like having babies and taking care of those babies,” she said. “I think the idea comes from the feminine and the way that women caretake for their families and everybody around them. But the idea is that everybody can do that. Not just women. Men can do it too. People that are nonbinary can do it. Queer people can do it, gay people can do it. To me, that’s where it comes from, the essence of the feminine and caretaking.”

Born and raised in Albuquerque, New Mexico, she said she’s also compelled to create every day because it’s healing for her.

“My dad, growing up, talked a lot about healing in his work, and when I had the realization that I use art in the same way, in order to heal, I also want to use it to help other people heal,” she said, as she took New Mexico PBS on a virtual tour through her creative space.

English, also an educator, is compelled to explore humor in her work.

“Humor is incredible because humor, specifically clowns, are used as teachers,” she said. “I’m a teacher and my main form of pedagogy is to use humor in my work and teach people because it creates human connection,” she said.

English also strives to break down Western cultural biases with her art.

“This idea of radical inclusivity and taking care of our relatives and being good ancestors to people, I don’t hear a lot of people outside of Native people talking about that kind of thing and what that means and how we can expand the idea of feminism to include everybody and to not make it an exclusive idea,” she said.

This originally appeared on NMPBS’ ¡COLORES!