How this artist heard a second calling in the church

Ads for Procter & Gamble. Glassware patterns for Anchor Hocking. A line of Gibson greeting cards for black consumers — among the first of their kind. A major fast food company’s collectibles for one of the biggest film franchises in history.

But long before that, 6-year-old Yvette was bedridden with tuberculosis, and it was a visiting nurse who was the first to notice her natural talent. Dalton received home check-ups and school lessons from Mattie Ingram Lyle, who alerted Yvette’s parents to their child’s art ability. After that, they made sure she had the supplies and support to succeed.

Yvette eventually became an art teacher, then set up shop with her husband. With a small loan and the help of recent art school graduate Donna Weaver, they created the “Black Velvet” line for Gibson Greeting Cards in the early 1970s, essentially filling a hole in the market. The greeting cards, which featured photographs of Dalton’s family members, friends, and even Dalton herself, were a hit. But when a recession came along in the mid-1970s, their small business was one of the casualties. Soon after, she and her husband divorced. 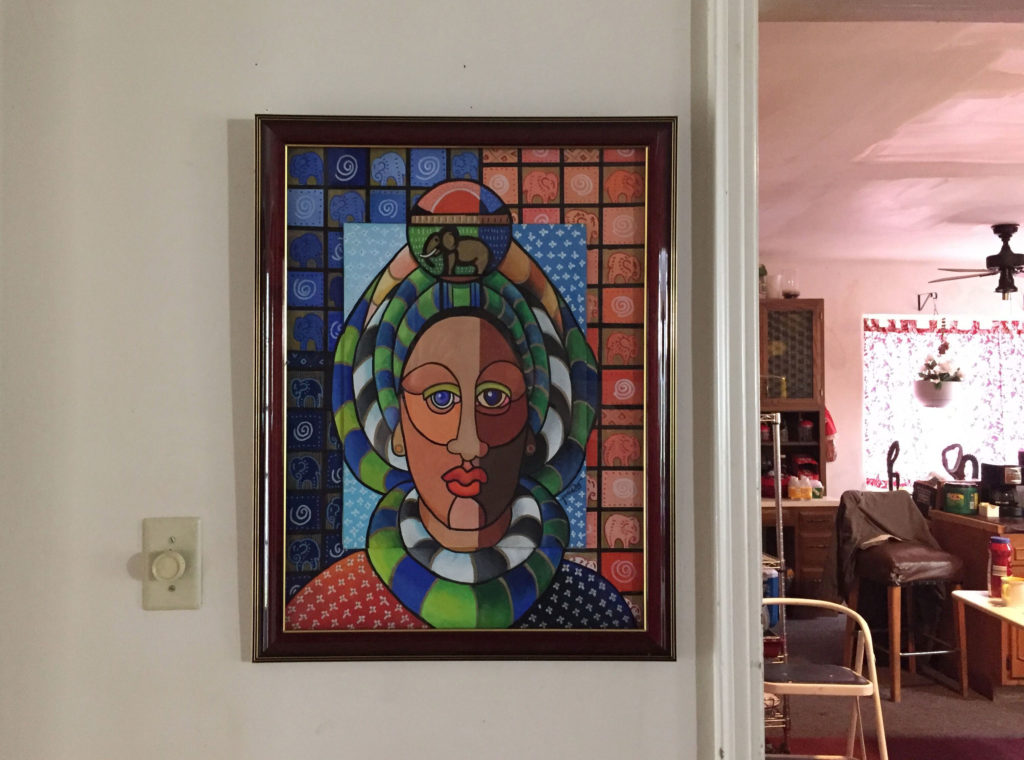 Dalton’s painting “The Matriarch” (2013). Dalton said the work was inspired by the women she met on a 2010 trip to visit her youngest daughter, who at the time was living in Johannesburg, South Africa. Photo by Ann Rotolante/ ThinkTV Network

Dalton then moved to Lancaster, Ohio, to work in the art department of Anchor Hocking, a glassware company. In 1979, right before Christmas, the director of her department asked who would be available for some extra work over the holidays. Yvette volunteered, not realizing that the project was to design a set of four collectible glasses for Burger King to promote the upcoming “Star Wars” sequel “The Empire Strikes Back.”

“They gave me photographs of what they wanted on these particular glasses,’ she told ThinkTV. “They also had me sign a paper that I would not, not, not tell about Yoda,” the Jedi Master first introduced to audiences in “The Empire Strikes Back,” she said.

Dalton’s career trajectory was literally blasting out of this world by the late ‘70s. Yet she had another calling. 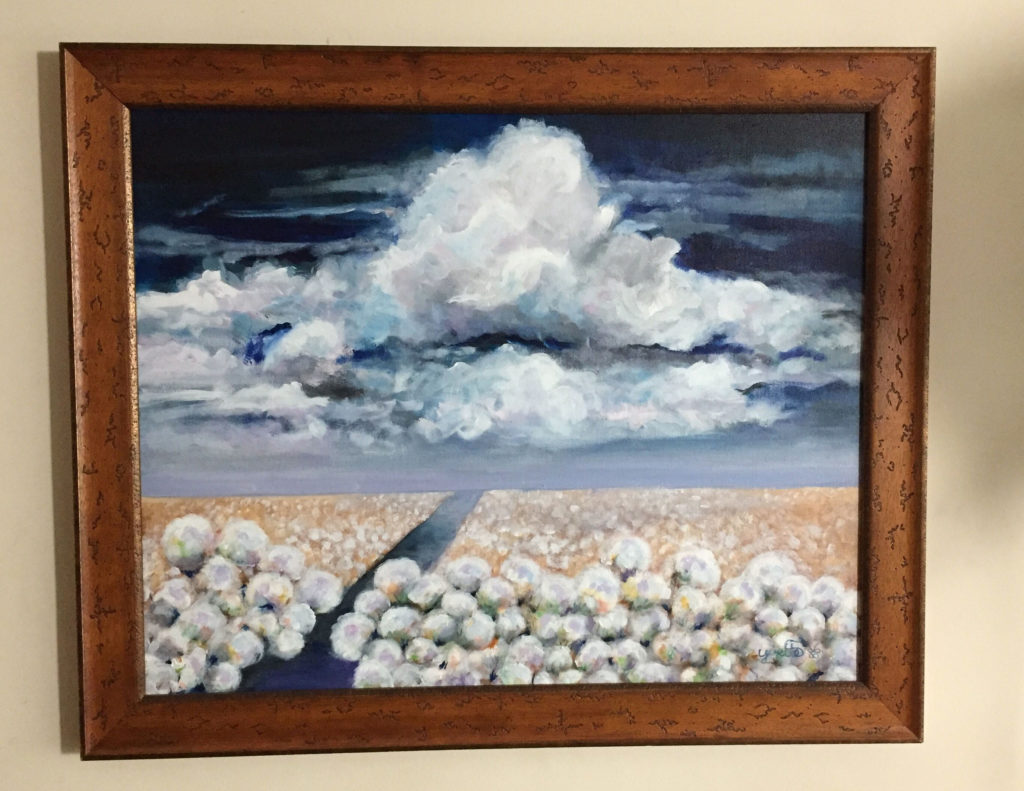 Dalton had been thinking about making a change for some time. The pastor at her church in Cincinnati asked if she had ever considered going into the ministry, thus planting a seed.

“I thought he was absolutely crazy cause I had never seen a woman pastor in my entire life, and I told him no,” she said. But that seed started to grow, and she finally decided to go into the ministry — if she could combine her art experience with a theological education.

After completing seminary school in San Francisco, Dalton became pastor of Shawnee Presbyterian Church in Louisville, Kentucky, where she surprised the small congregation with a Christmas display of handmade angels flying up into the sanctuary. She later secured stewardship positions within the Presbyterian Church that allowed her to combine theology with art, and retired in 2010. 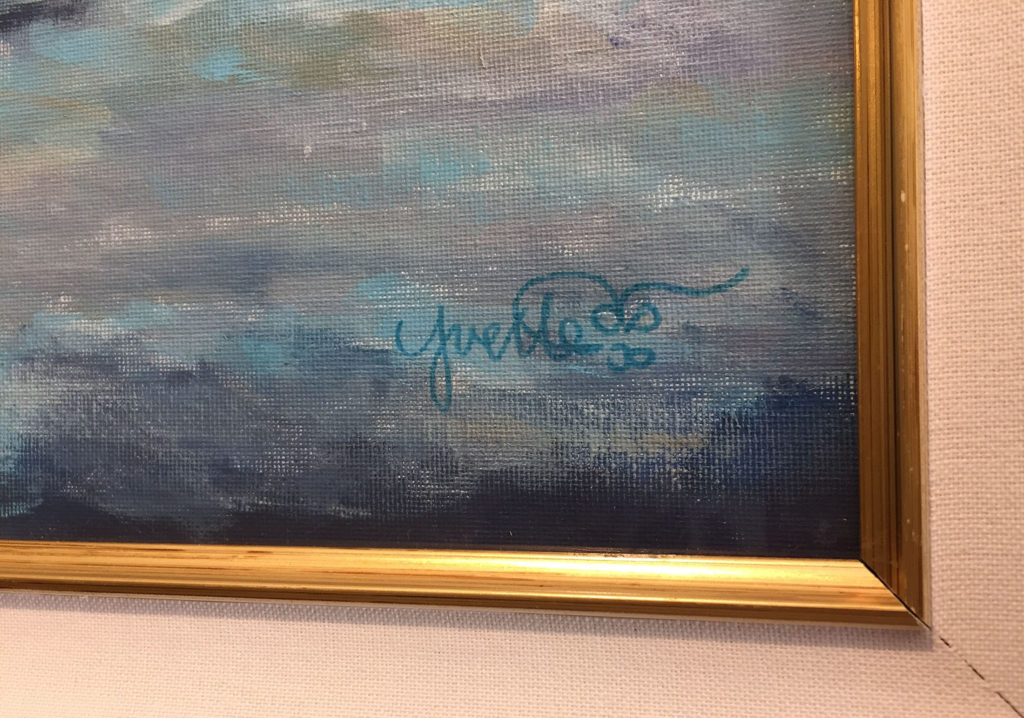 Dalton’s signature on one of her paintings. Photo by Ann Rotolante/ThinkTV Network

“In retiring, I always said, I want to go back to being an artist, only this time on my conditions.” Dalton, 76, has returned to her hometown of Dayton, Ohio. She now works primarily in acrylic paint and collage, and has even taught a few classes. But this accomplished artist is still growing and trying new things.

“You know, when you see somebody’s artwork many times, you can tell that’s their artwork because that’s their style? I don’t have that yet, but I’m enjoying it,” she said.

ThinkTV Network's "The Art Show" takes a look at the artists and the art scene in and around Cincinnati and Dayton.