In 2006, when molecular biologist Rana Dajani returned to Jordan after completing her PhD in Iowa, she noticed something about the children she encountered.

Growing up with her family in that country — and now as a mother — reading was considered a cherished pastime. When she was a child, Dajani’s parents would read aloud to her and her seven younger siblings, who all went on to devour books.

But although almost all of Jordan’s population can read (an estimated 95 percent as of 2015) many children weren’t reading outside of academic and religious contexts. They didn’t read for fun.

Research in the U.S. and U.K. has associated reading with longer lifespan, increased empathy and well-being, and reading fiction in particular has connections to increased processing skills, like creativity.

Some were begging for their parents to read to them, and others stashed books for safekeeping under their pillows.

To help kids in her neighborhood fall in love with reading, Dajani sought to replicate her own experience. So in 2006, she picked a ubiquitous public space for a reading circle: her local mosque. “It’s got a bathroom, it’s carpeted, it’s accessible, it’s safe, it’s empty in the mornings,” she said.

Donning a funny hat, she would offer animated readings of age-appropriate stories to the kids who showed up.

From that first session, Dajani has stuck to a couple of tenets. Despite the location of the group, themes of religion and or education were excluded from her book choices. Instead, Dajani wanted to expose kids to stories relatable to their everyday lives.

She also read in Arabic. “In order for the kids to fall in love, it has to be in their native tongue,” she said. At the end of storytime, Dajani lent physical books to children who wanted to take them home.

Over time, as the sessions continued, Dajani started to hear anecdotal feedback from parents: Some children had started to do better at school, some were begging for their parents to read to them, and others stashed books for safekeeping under their pillows.

Dajani continued to experiment with and refine the format of her neighborhood reading program. After winning the Synergos Award for Arab world social innovators in 2009, which helped her access more resources to branch out and start a program that trained volunteers from other neighborhoods. Dajani also provided them with a “seed library,” which helped them sustain their own local book collections.

A decade later, her nonprofit, now dubbed We Love Reading, has expanded to more than 40 countries globally and has trained more than 7,000 adults to foster a love of literacy in children. Around 4,000 have gone on to establish their own libraries.

“We want to reach every child in every neighborhood across the world,” Dajani said. 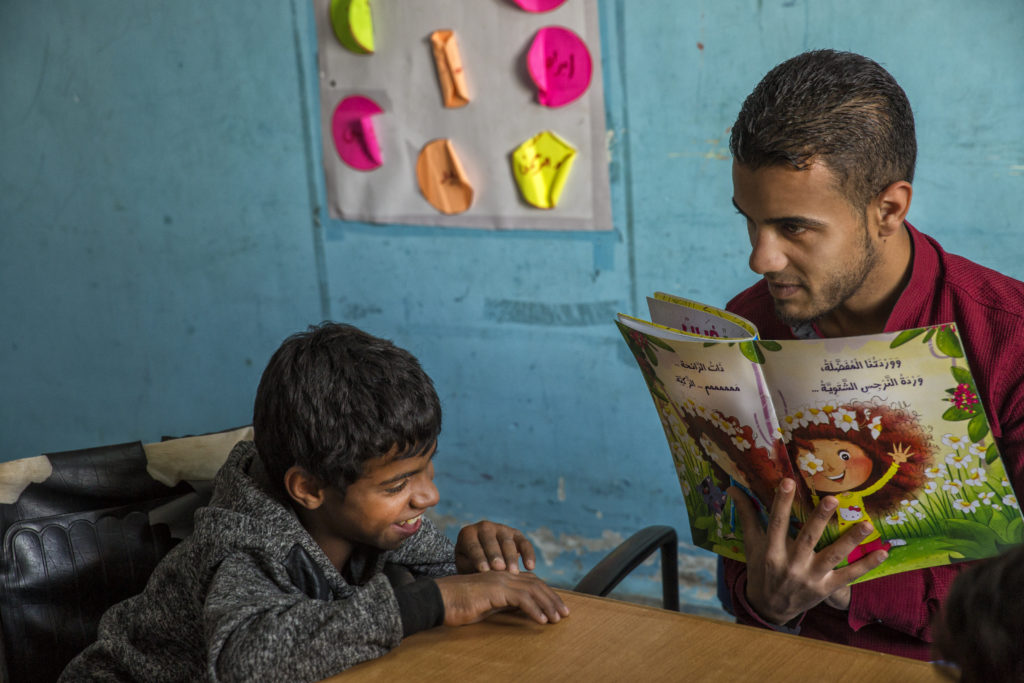 A reading session in Mafraq, Jordan. Photo by Saskia Keeley/ We Love Reading

Close to home, the charity’s flexible model was easily adapted to serve children of Jordan’s large Syrian refugee population. Dajani found that once refugees had been trained, they could carry the program with them, finding times and places that were safe for children to read, and becoming a “placeholder” for those without access to formal schooling.

The charity has also branched out to produce its own children’s books with underlying universal themes of non-violence, conserving the environment and caring for vulnerable populations. Saskia Keeley, a photo-documentarian who worked with the organization in Jordan, watched as Syrian children in the Azraq refugee camp read about refugees. “It was telling their story and they were very, very involved,” she said.

“It was telling their story and they were very, very involved.”

We Love Reading has also partnered with international NGOs in South Sudan and in Jordan, and in 2017, was awarded a U.N. prize for mother-tongue literacy education.

Dajani has lately been working to gather data backing up her hunch about the program’s benefits. Using her scientific training, she co-wrote an article in 2017 with researchers from Qatar University showing how the informal educational intervention of her nonprofit increased children’s knowledge about environmental issues and impacted their behaviors at home.

Collaborating with Dima Amso, a developmental psychologist at Brown University, We Love Reading ran a pilot study with an initial group of 30 to 40 Jordanian children that suggested the program has an impact on both cognitive development and executive function.

“Things are very promising and we do feel good about continuing in this direction,” Amso said.

The group also plans on translating an Arabic online training program and mobile app for would-be volunteers into more languages.

Last weekend, Dajani called into a session in Vietnam via Skype, speaking with more than 200 volunteers who had signed up for We Love Reading’s first training in that country.

“We’ve been called a social movement–we’ve become viral!” she said.