Catan is one of several tabletop games you could play while social distancing. Photo by Barry Chin/The Boston Globe via Getty Images
Arts & Culture

You’re at home. You’ve already binge-watched everything, reorganized your furniture, fiddled with your dusty guitar or finally finished “War and Peace.” You’re yearning for a new creative outlet or at least find a new way to connect with family and friends. Why not give the world of tabletop games a closer look?

Tabletop roleplaying games (or RPGs) like Dungeons and Dragons have been surging in popularity over the last five years, alongside more conventional card and board games, transforming what was once a niche hobby into a thriving industry.

Tabletop RPGs are unique from other games in their ability to pull players into complex worlds of fantasy and adventure, while often shedding the need for a board. All you need is a set of rules, some dice and a lot of imagination. In that regard, it’s a perfect way to escape cramped quarters and maintain relationships with family and friends during the pandemic.

READ MORE: 8 books to read in the time of the coronavirus

“It’s a very good social tool to bring people together,” said Matt Mercer, a voice actor and dungeon master for the Dungeons and Dragons livestream show “Critical Role.” “Your imagination can take you wherever you need.”

Since the start of stay-at-home orders in most states, game developers for modern card and board games say they have also seen an uptick in players joining up through video chat services or other online platforms, according to some who spoke with the PBS NewsHour. Guido Teuber, a game designer for the award-winning Settlers of Catan (now known simply as Catan), noted an influx of players now interested in their online resources, a trend he attributes to the pandemic.

“It’s been a massive increase,” said Teuber, talking about the game’s online resources. “We never really paid much attention to it, but now it’s gotten our full attention.”

But knowing where to start with tabletop games can be tricky — especially now when you can’t easily gather around a single table. Navigating online meetings is its own challenge, there’s also a large number of titles and styles to choose from, which might be intimidating for beginners.

“The easiest way to get access to roleplay games is to play in someone else’s game first,” said Grant Howitt, the game developer of the RPG Honey Heist.

To help navigate the abundance of dice and cardboard, we asked tabletop gamemakers to recommend some of their favorites. The list below also includes a few games that are accessible for new players.

D&D is the most popular tabletop RPG in the world, and for good reasons. One of the first in the genre, the creators have had decades to refine the system and ensure beginners and longtime players alike have an enjoyable experience.

Set in a rich fantasy world of elves, goblins and (of course) dragons, players take on the role of adventurers helping townspeople, looting dungeons and occasionally saving the world.

You can find a lot of resources on the internet for learning the game and tools to make the experience easy and enjoyable such as D&D Beyond. Watching livestreamed game sessions like the one played on “Critical Role” can give potential players a chance to see how the game works.

“Tabletop gaming is such a readily available experience,” said Mercer, who has also written official material for D&D. “It’s a much easier time now than it ever was to dive in.”

In this RPG, you play small, heroic mice working together in a forest of dangers.

It’s a familiar setting for anyone who has read the “Mouse Guard” comics or have read similar books like “Redwall” by Brian Jacques or “Mrs. Frisby and the Rats of NIMH” by Robert C. O’Brien and Jane Leslie Conly.

The game, recommended by Mercer, is well designed for all ages, making it a good choice for families looking to spend quality time during social distancing.

A grittier RPG, Cyberpunk sends players to an ’80s-inspired dystopian future where corporations and power-hungry cyborgs rule the streets. The game contains adult themes, and is perhaps best played among mature friends.

The developers have released an easy jumpstart kit for the latest version of the game, Cyberpunk Red, with a full version on the way. The pre-established characters and simplified ruleset makes it easy to try before the full game comes out later in the year.

The premise is simple: You’re a group of bears in hats trying to steal a trove of honey.

This humorous tabletop RPG by Grant Howitt is easy to pick up and play since the rulebook is only two pages long.

Howitt said a great feature about roleplaying games is that they’re made for you to make it your own.

“It is primarily you and your friends crafting a story together,” he said.

Fiasco, also recommended by Mercer, throws the players into the middle of a heist gone wrong.

Another RPG built for simplicity, Fiasco doesn’t require a game master to lead the other players through the narrative. With multiple possible scenarios, the goal for each player is to make it out alive while achieving their personal ambitions, even if they clash with another player. 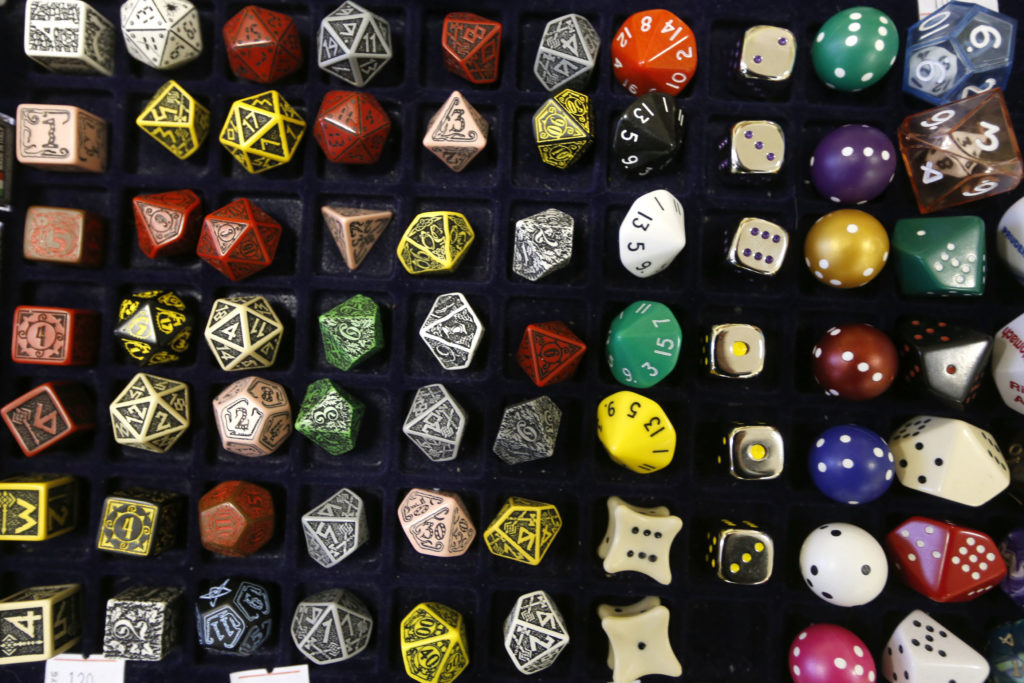 Sets of dice are seen on display during a board games festival in St. Petersburg, April 20, 2014. REUTERS/Alexander Demianchuk

Catan pushes players onto a fresh continent where resources are scarce and building settlements takes both cooperation and shrewd strategy.

Similar to Monopoly, it makes players compete for land and wealth, but takes it to another level of complexity.

Amid widespread public efforts to keep people at home, Teuber said the company has been working to expand their online resources for the new influx of players.

Exploding Kittens is a fast-paced card game built for people who enjoy a little toilet humor. It’s designed by comic artist Matthew Boyd Inman of “The Oatmeal,” a long-running web comic series that covers a variety of topics including cats, Nikola Tesla and sriracha hot sauce.

The goal of the game is to avoid getting “exploded” by an exploding kitten card, and the last player alive wins.

Teuber said he enjoys playing this game with his family after dinner, especially now that family dinners have become a habit again.

In this card game of deceit and accusation, most of the players are given roles as villagers, while one is deemed the werewolf. Players must figure out which one of them is the monster before it eats everyone in the village.

There are many variants of this game, including Mafia and One Night Ultimate Werewolf, which make players figure out who is and is not on their side.

Set in the 1930s, players assume the roles of elected officials of a liberal democracy, but some are secretly fascists and one is the “secret Hitler.” The goal is to figure out who the fascists are before Hitler is permanently elected as chancellor.

With mechanics similar to Werewolf, this game of political intrigue tests the players’ knowledge of each other, and how good they are at sniffing out lies.

More abstract than the previous entries, this board game is about creating beautiful tiled patterns while wasting as little currency as possible.

Inspired by decorative Moorish tiles from Spain, this game emphasizes aesthetics without going over budget.

Related Content
Arts & Culture
19 immersive museum exhibits you can visit from your couch
Arts & Culture
Famous paintings come to life in these quarantine works of art
Arts & Culture NEPM Massachusetts
Want something to do? The Dr. Seuss museum has an idea or two
Top Stories
Arts & Culture
DC art exhibit makes shoes out of trash in nod to the ‘Great Shoe Spill of 1990’