For more than two decades, Mariah Carey and Boyz II Men could not be knocked off their U.S. Billboard throne. From December 1995 to March 1996, their ballad “One Sweet Day” spent 16 weeks at the top of the charts, setting a record that outlasted the megahit-makers that came after them: Taylor Swift, Kelly Clarkson, Beyonce, Outkast, Green Day, Alicia Keys, Jay-Z and Adele.

In 2017, the Puerto Rican club jam by Luis Fonsi and Daddy Yankee tied the longest-running streak set by “One Sweet Day.” Two years later, the record was broken by the breakout country rap single by Lil Nas X (though his streak was snapped on Monday when Billie Eilish’s “Bad Guy” took No.1).

Both “Despacito” and “Old Town Road” came from artists who were relatively unknown on the global stage, but that wasn’t what made them surprising.

The staying power of “Despacito” and “Old Town Road” defies one of the most profound changes in the music industry over the last 20 years: Individual songs and albums don’t stay popular for very long (a dynamic that at the moment also seems true of our culture more broadly).

A hit album today spends less than five consecutive weeks in the Top 40 on average, according to a new study published Tuesday in Royal Society Open Science. Thirty years ago, the same class of hit in the U.S. would ride the top charts for up to three times longer, the study found. This trend is international, true of music charts in the U.K., Germany and the Netherlands, too. 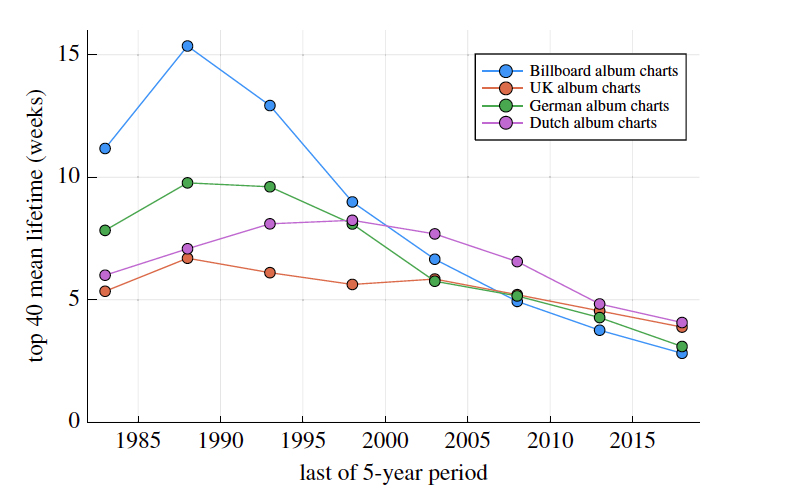 Average lifetime in the top 40, namely the number of consecutive weeks an album is listed on average among the top 40. The data have been pooled for trailing 5-year periods. Chart by Schneider L. and Gros C., 2019, Royal Society Open Science/CC BY 4.0

“Nowadays, you are either No. 1 from the start or essentially never,” said Claudius Gros, a theoretical physicist at Goethe University Frankfurt in Germany who co-led the study.

So what set “Old Town Road” and “Despacito” apart? For one, they show that a great song can still buck these new trends by relying on decades-old tricks — like those employed by musicians like Johnny Cash and studio producers behind the “Macarena” — to maintain a pinnacle position.

If you’re still sore that “One Sweet Day” lost its crown (just me?) you can take heart that it’s still in its own league. That’s because, thanks to campaigns on digital media and due to the nature of music streaming platforms like Spotify and Apple Music, it may be easier today to game the charts than it used to be.

What the scientists found

The U.S. Billboard has evolved over 50 years in terms of how many albums get mentioned — from the Top 40 to Top 100 to the modern day Top 200. Regardless, this list tracks the most popular albums, rather than individual songs, from week to week.

As a concept, it’s been applied to chaos theory in mathematics or adaptation in evolutionary biology — arenas where thousands if not millions of factors interact to create certain outcomes. For example, people wonder how hippos and blue whales can be cousins, and complex systems theorists are trying to explain it.

The average lifetime in the charts for an individual album has dropped by two-thirds since 1990, from 15 to five weeks in the U.S., the study found.

This decline has paralleled an increase in how many of the top albums reach the No. 1 spot in their first week. Since 2000, about 80 to 90 percent of No. 1 albums have started there on the first day they were released. In the late 1980s, this crème-de-la-crème figure hovered under 10 percent.

“If you’re not listed No. 1 in the first week, you essentially have no chance to ever reach the top,” Gros said. “In the 1970s and 1980s, this was completely reversed. Successful albums would enter the charts in 10th or 30th position, and it would take about six weeks to climb to the top.”

Gros and Schneider made a series of charts to describe how the “lifetime distribution” — the chance of any album reaching the top slots for any given number of weeks — had changed over the decades. They broke the numbers into four-year chunks — 1970 to 1983, 1984 to 1988 and so on through 2018.

In the two graphs below, notice the blue and orange lines in the chart on the left? The lines bend upward and have a peak, showing there used to be an average lifespan — of five weeks — for top albums that charted from 1979 to 1988.

“Then you had a handful of albums that listed for much shorter times and then a few that stayed for longer times,” Gros said.

That’s what’s known as a normal distribution** or a bell curve. It suggests that top albums back then behaved in a routine, normal way with few exceptions or outliers.

But see how the lines start to stretch out and angle downward like a water slide over the years? That’s because music popularity began to follow this pattern, known as the power law.

The team found similar but not as precise patterns — see below — when they looked at the Hot 100, which tracks the performance of individual singles rather than whole albums. Over the decades, the lifetime distribution of singles does appear to be straightening out (right panel below), as if it wants to follow the power law too.

Lifetime distribution for singles in the most recent years (right panel) appears to be straightening out, as if it wants to follow the power law. Chart by Schneider L. and Gros C., 2019, Royal Society Open Science/CC BY 4.0

Other studies have found a similar connection between singles success and the power law.

(**Yes math heads, I know that it is technically a log-normal distribution.)

Why the power law can mean music profits

This power law means music charts are constantly sitting at what mathematicians call a critical point. Imagine you are bending a twig and it breaks. The precise moment where it snaps is a critical point. Music charts, according to Gros and Schneider’s study, are always on the verge of changing from one state to another, always in transition.

That’s because, “in this case, there is a strong feedback between people buying music and what the musicians create and directly promote,” Gros said.

Nowadays, you are either No. 1 from the start or essentially never.

Back in the day, it took time to purchase music. Disc jockeys at radio stations had broad control over the music that people heard, so it might take weeks before a new song hit the airwaves. You would need to hear the track a couple of times to build enough desire to go buy the album. That tacks on a few more days. Then you might need to wait to save up a few dollars, or catch a ride to the record store.

But today, an artist can instantly tell millions of Twitter or Instagram followers that a song or album has dropped. Listeners can instantly download or stream it on iTunes or YouTube. The music will start trending and then spread to top playlists across Spotify or Apple Music. That will generate more buzz and more streaming.

Gros’ study argues the reactions in this feedback loop between consumers and digital promotion are moving faster and faster — and other experts agree.

“If a listener wants to be on the cutting edge of exploring the new content and, hey, see something blowing up, they want to be in it,” said Andrew Mall, an ethnomusicologist and music industry expert at Northeastern University, who wasn’t involved with the study. “It’s a kind of feedback hype.”

A world defined by feedback hype is unstable, according to the study. People’s decisions become dependent on what’s trending, and these trends never stop changing. 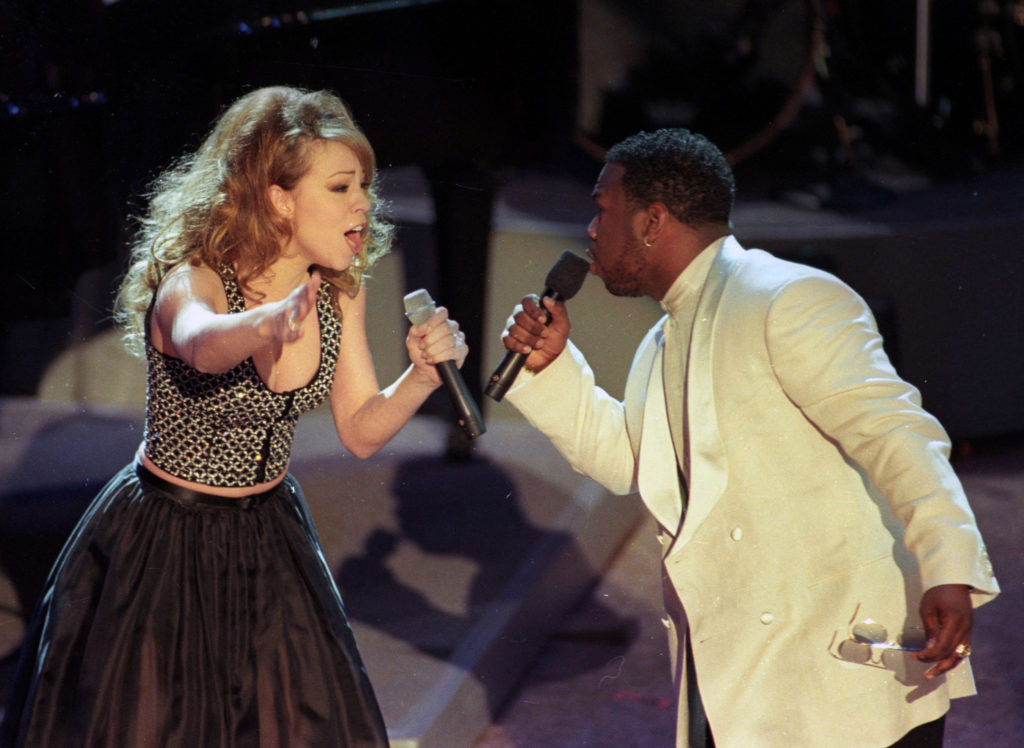 Spotify, for example, continually refreshes its most popular playlists like “Today’s Top Hits” and “New Music Friday” — and landing on those lists can now dictate success. A 2018 report in NBER found placement on those Spotify playlists can increase a song’s popularity by a respective 20 million and 14 million streams on average.

“After many years of distress, the music industry has actually seen its revenues increase pretty sharply because streaming is working,” Joel Waldfogel, a music industry economist at the University of Minnesota, who authored the NBER report and the recent book, “Digital Renaissance: What Data and Economics Tell Us about the Future of Popular Culture.”

Being listed on “Today’s Top Hits” typically comes with $162,000 in earnings from Spotify alone, and Waldfogel said this popularity likely feeds revenue streams from other platforms.

But once the curators remove a song from these playlists, the number of streams drops almost immediately, suggesting those plays had hinged on feedback hype.

Why it matters for artists today

Rather than lose relevance, Mall said “Despacito” and “Old Town Road” capitalized on this feedback hype by repeatedly adapting. They made crossover remixes that targeted different places around the world, one after another.

“We’ve had crossover hits for decades. They’re essentially songs that are charting well in a particular region, market or genre,” Mall said. “Johnny Cash did it late in his career by working with producer Rick Rubin.”

For “Despacito,” success started among Spanish-language charts, but after a few months, Fonsi and Daddy Yankee released a crossover remix with Justin Bieber.

That allowed the momentum from Latin America to feed the song’s success in the U.S. and then globally, extending its stretch on the top of the charts.

Mall said that followed the mold of “Macarena,” which started as a rumba dance song in Spain. The creators — Los del Río — made a handful of remixes. Those gained traction in Mexico and Colombia and then caught the attention of a producer in Miami, who launched the hugely famous English version.

After a couple months, the Billboard controversy and one Billy Ray Cyrus remix, the song solidified its favor among country fans. Lil Nas X then released a string of crossover remixes with international stars like the Korean boyband BTS.

Each digital campaign and remix reset the feedback hype.

“They’re absolutely doing it strategically to reach new audiences because those audiences are going to fuel commercial and chart success,” Mall said.

A Brief But Spectacular take on living what you teach

Rare documents with 12 signatures of Dr. Martin Luther King Jr. sold on Wednesday for more than $130,000. They were…

A Brief But Spectacular take on living what you teach