Garth Brooks accepts the award for entertainer of the year at the 53rd Annual CMA Awards in Nashville, Tennessee on Nov. 13, 2019. Photo by Harrison McClary/Reuters
Music

Garth Brooks wins entertainer of the year at CMAs, despite female push

The Country Music Association Awards almost fully honored and highlighted the women of country music — whose songs have been heavily dismissed on country radio over the years — until two words were uttered when they named its entertainer of the year: Garth Brooks.

Wednesday night’s show kicked off with a performance featuring country female acts across generations, included three female hosts and had Maren Morris as its top nominee. But in the final moments, Brooks won the top prize over Carrie Underwood, who many had hoped would be the first female to win entertainer of the year since 2011.

Brooks did highlight female acts during his acceptance speech at the Bridgestone Arena in Nashville, Tennessee.

“If they gave this award for this show tonight, I’d have to give it to Reba McEntire’s performance,” Brooks said, while also praising Kelsea Ballerini and Luke Combs, who won two honors.

All eyes seemed to be on Underwood, who had a successful year with her album “Cry Pretty” and an all-female tour, for an entertainer of the year win. The last woman to win the prize was Taylor Swift, and Underwood was this year’s sole female nominee.

Underwood hosted the show alongside McEntire and Dolly Parton, and though she didn’t win any awards, Underwood did win over the audience: She was a vocal beast, hitting all the right notes and more during a smoky performance of “Drinking Alone.” 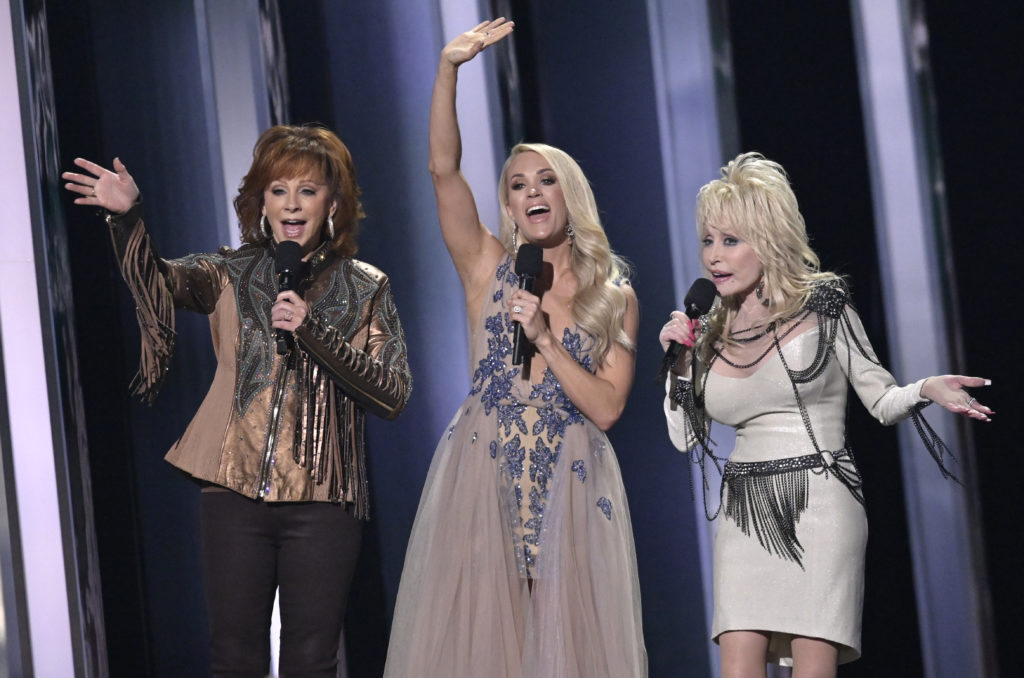 Morris also marked the big night for female country acts by taking home album of the year for “GIRL.” The award also went to her producer busbee, who died in September at age 43 from brain cancer.

“I would be really remiss if I didn’t mention a huge facet of why this album sounds the way it does, and we miss him so dearly. He texted me the morning that we got the nomination for album of the year this year, and we were so excited, and that’s our friend busbee,” a teary-eyed Morris said onstage. “His wife Jess is here tonight and she looks so beautiful. Thank you for sharing your husband with us once a month, and my heart just goes out to you and your beautiful daughters. I hope when they listen to this record or any of the songs that he made that made us all better, they know how amazing their father was.”

Kacey Musgraves, who won four Grammys this year, picked up female vocalist of the year and music video of the year for “Rainbow.”

“The female creative spirit, the female energy is really needed right now, it’s really important and I feel like it’s something that Earth needs. So whether it’s me that’s up here or any of the other women in this category, I just think that it’s a beautiful thing and I’m very appreciative,” Musgraves said.

Other women who won Wednesday included Ashley McBryde, who won new artist of the year, and fiddle player Jenee Fleenor, named musician of the year. 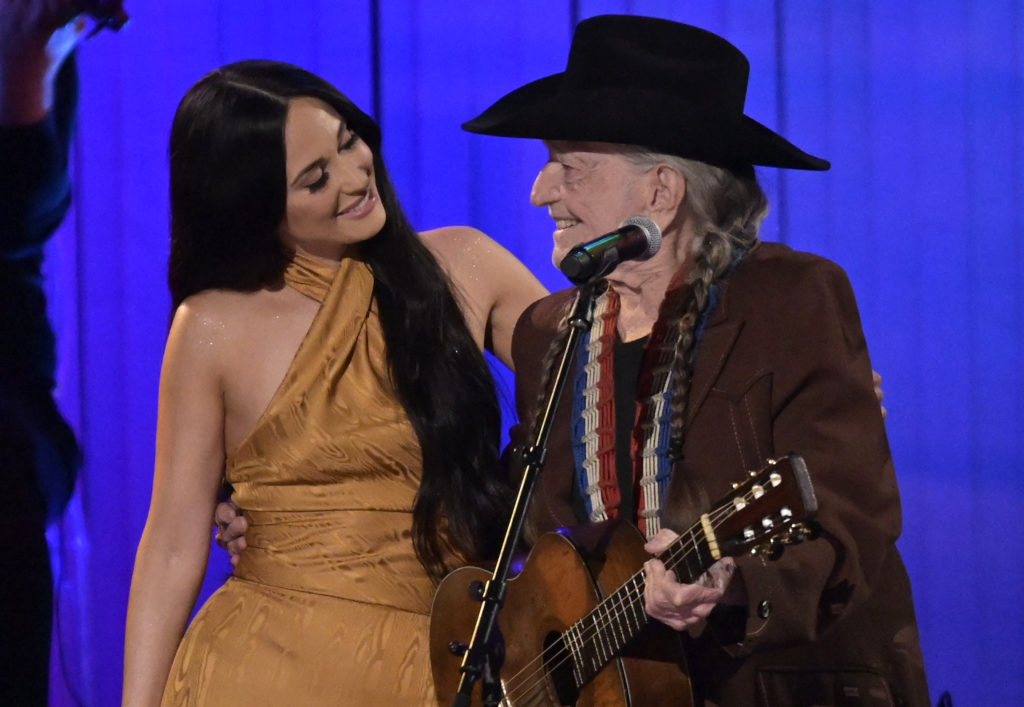 Musgraves, joined by Willie Nelson, gave a wonderful performance of “Rainbow Connection” from “The Muppet Movie,” even weaving in some of her own song “Rainbow.” Pink also shined, with Chris Stapleton by her side, as she performed the song “Love Me Anyway.” And Dan + Shay, who won vocal duo of the year, gave a beautiful, heartwarming performance of the hit “Speechless.”

In a white dress and standing on a stage donned with white flowers, Morris — who is pregnant — performed her hit song “GIRL,” touching her belly as she hit a high note at the end of her performance. 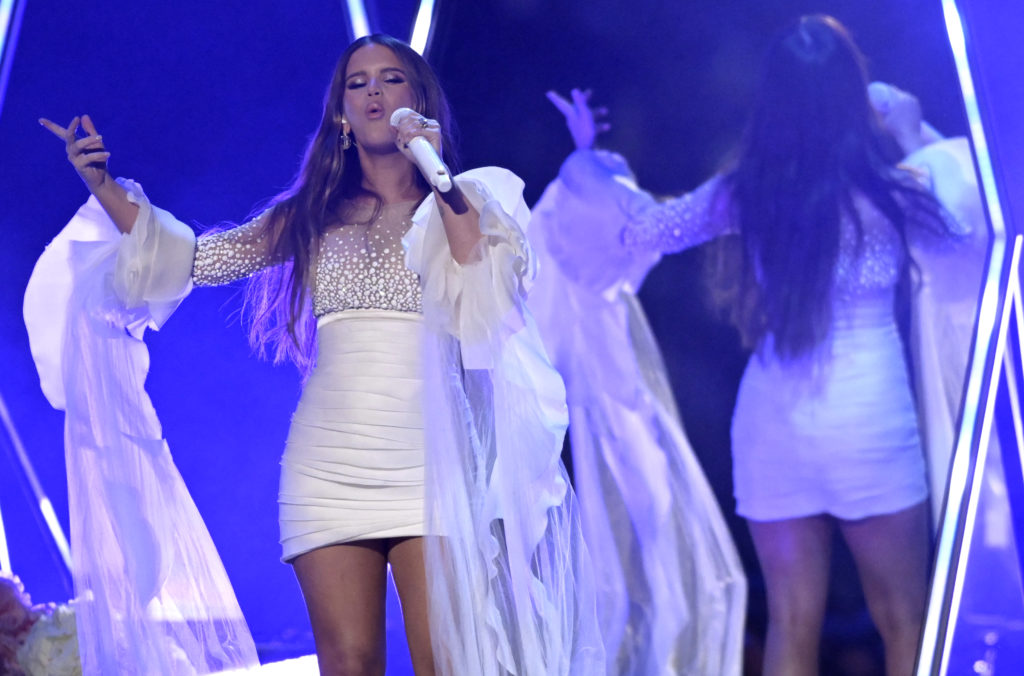 “GIRL” was also nominated for single of the year and song of the year, but it lost in both categories (the winners were Blake Shelton’s “God’s Country” and Combs’ “Beautiful Crazy”). Morris also lost musical event of the year to Lil Nas X and Billy Ray Cyrus’ ubiquitous No. 1 hit, “Old Town Road.”

Combs, who has dominated the country charts and streaming services with his songs and albums, also won male vocalist of the year, beating out Stapleton, Keith Urban, Thomas Rhett and Dierks Bentley.

“I remember sitting on my parents’ porch as a little kid and watching Vince Gill win this same award,” he said. “Country music means everything to me.”

After the performance Parton asked, “What do you call three women hosting the CMAs?”

“Your lucky night,” she screamed.

McEntire added that they joined forces to host the show and perform the opening number to inspire young women watching the awards show from their TV screens.