Lulu Wang poses backstage with the award for Best Feature for the film "The Farewell" and for Best Supporting Female which she accepted on behalf of Zhao Shuzhen, also for "The Farewell." Photo by Lucas Jackson/Reuters
Film & TV

The win Saturday for “The Farewell” was a surprise, but also a fitting finale to a Spirit Awards that exalted female filmmakers and put forth a far more diverse field of nominees than the film academy. Wang referenced the conversation around the dearth of female filmmaker nominated by the Academy Awards in her speech.

“You don’t have to encourage women. There are lots of women making films, in film school,” said Wang. “What women need is just the job. Give them the freaking job!”

The Spirits, held in an ocean-side tent on the Santa Monica, California, beach the day before the Oscars, often diverges greatly in tone from the weekend’s other, more formally attired award show across town. But the winners — including “Moonlight,” “Spotlight” and “Birdman” — have often lined up.

Yet more so than in years, the Spirit Awards hardly overlapped with the Oscars this time around. “The Farewell” was shutout by the film academy, which instead heaped nominations on bigger-budget epics including “1917,” “Once Upon a Time … in Hollywood” and “The Irishman.” The Spirits, the premier awards ceremony for indie film, cap nominees at a budget of $22.5 million.

“The Farewell” also won best supporting performance by a female actor for Zhao Shuzhen, the grandmother (“Nai Nai”) in the film. Many expected the award to go to Jennifer Lopez (“Hustlers”). Wang said Shuzhen, a Chinese actress, couldn’t attend the show because of coronavirus travel restrictions. 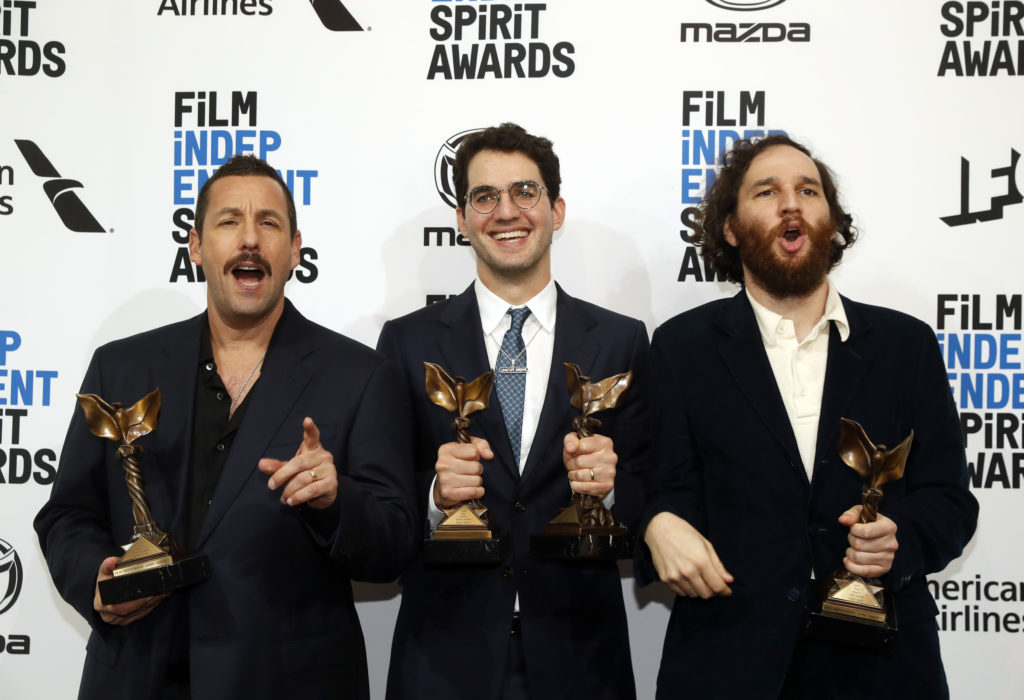 (L-R) Adam Sandler holds his Best Male Lead award as he poses backstage with Benny Safdie and Josh Safdie with their Best Director awards, all for “Uncut Gems. Photo by Reuters

The boutique studio A24 dominated the Spirits, winning trophies for “The Farewell,” “Uncut Gems” and “The Lighthouse.” “Uncut Gems” led all films with three awards, including best performance by a male actor for Sandler, best director for Josh and Ben Safdie, and best editing.

Sandler, who received a standing ovation, compared his Oscar “snub” to losing best looking in high school. But he did win best personality, an honor he compared to his Spirit Award.

“As I look around this room, I realize the Independent Film Spirit Awards are the Best Personality Awards,” Sandler joked. Referring to the Oscar nominees he said, “Their handsome good looks will fade in time, while our independent personalities will shine on forever.”

Only one Oscar favorite among the actors was also competing at the Spirits: Renee Zellweger. She won for her performance in the Judy Garland drama “Judy.” “Cheers to you from the beach, Ms. Garland,” Zellweger said.

And just one movie up for best picture on Sunday was nominated for the Spirit Awards’ top prize: Noah Baumbach’s “Marriage Story.” It won for Baubmach’s screenplay and was awarded the Spirits’ ensemble award, dubbed the Robert Altman Award.

Baumbach thanked “Parasite” director Bong Joon Ho — the category’s expected co-winner on Sunday — for not being nominated for best screenplay. (Though a favorite for top awards on Sunday, “Parasite” won a single award at the Spirits, for best international film.)

In his second speech of the afternoon, Baumbach dismissed the idea that independent film and the Spirit Awards are “the minor leagues.”

“To me the movies we’re celebrating here today, they are the movies,” said Baumbach. “They are as major as anything.”

While this year’s Oscars only feature one acting nominee of color, the Spirits nominees — including nominations for Alfre Woodard (“Clemency”), Octavia Spencer (“Luce”), Taylor Russell (“Waves”) and Jonathan Majors (“The Last Black Man in San Francisco”) — were notably more diverse. All of the nominees for best supporting performance by a female actor were women of color.

While the Academy Awards have been criticized for again nominating an all-male field of directing nominees, Alma Har’el (“Honey Boy”) and Lorene Scafaria (“Hustlers”) were both among the Spirits’ nominees for best director. Olivia Wilde won best first feature for her high-school comedy “Booksmart.” A recently created grant for mid-career female filmmakers dubbed the Bonnie Award was also given to Kelly Reichardt (“Wendy and Lucy,” “First Cow”).

In her opening, host Aubrey Plaza alluded to the different perspective of the Spirits.

“The Independent Spirit Awards are always cooler than the Oscars,” said Plaza of the awards put on by Film Independent, a nonprofit group of about 7,000 film enthusiasts. “It’s the daytime, we’re on the beach, we recognize female directors.”

The spotlight belonged to filmmaking couples at the Spirits. Though Greta Gerwig’s “Little Women” was ineligible, her partner, Baumbach, thanked her from the stage. “Though she made a movie too expensive for the Spirit Awards, she’s no less independent than anyone here,” he said. Wang’s win came a year after her boyfriend, Barry Jenkins, won best feature at the Spirit Awards for “If Beale Street Could Talk.”

READ MORE: How music amplifies the drama in these two Oscar-nominated movies