LOS ANGELES — Subtitle this: “Parasite” is the first non-English language film to win best picture in the 92-year history of the Academy Awards.

Bong Joon Ho’s masterfully devious class satire took Hollywood’s top prize at the Oscars on Sunday night, along with awards for best director, best international film and best screenplay. In a year dominated by period epics — “1917,” “Once Upon a Time … In Hollywood,” “The Irishman” — the film academy instead went overseas, to South Korea, to reward a contemporary and unsettling portrait of social inequality in “Parasite.”

True to its name, “Parasite” simply got under the skin of Oscar voters, attaching itself to the American awards season and, ultimately, to history. The win was a watershed moment for the Academy Awards, which has long been content to relegate international films to their own category. 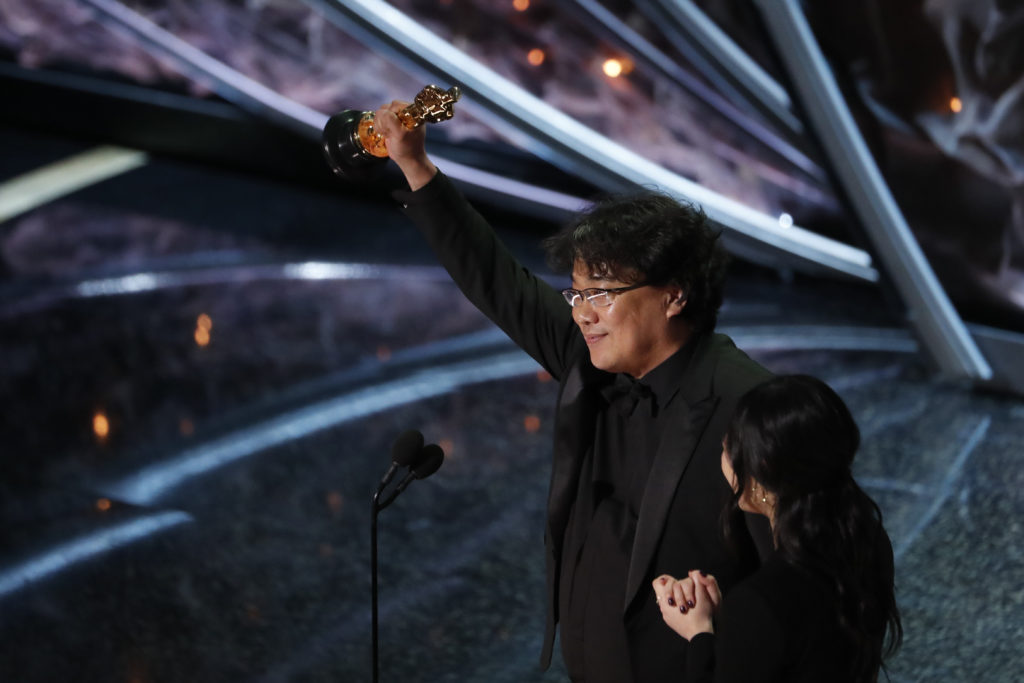 The win for “Parasite” — which had echoes of the surprise victory of “Moonlight” over “La La Land” three years ago — came in year in which many criticized the lack of diversity in the nominees and the absence of female filmmakers. But the triumph for “Parasite” enabled Hollywood to flip the script, and signal a different kind of progress.

In doing so, the film academy turned away another history-making event, again denying Netflix its first best-picture win despite two contenders in “The Irishman” and “Marriage Story,” and a big-spending awards campaign blitz.

Few categories were more certain coming into Sunday’s Oscars than best supporting actor, which Pitt has had locked down all awards season. While Pitt (who in 2014 shared in the best picture win for “12 Years a Slave,” as was a producer) has regaled audiences with one-liners in the run-up to the Oscars, he began his comments on a political note.

“They told me I have 45 seconds to speak, which is 45 seconds more than the Senate gave John Bolton this week,” Pitt said, alluding to the impeachment hearings. “I’m thinking maybe Quentin does a movie about it.”

Pitt said the honor had given him reason to reflect on his fairy-tale journey in the film industry, going back to when he moved to Los Angeles from Missouri. “Once upon a time in Hollywood,” said Pitt. “Ain’t that the truth.” 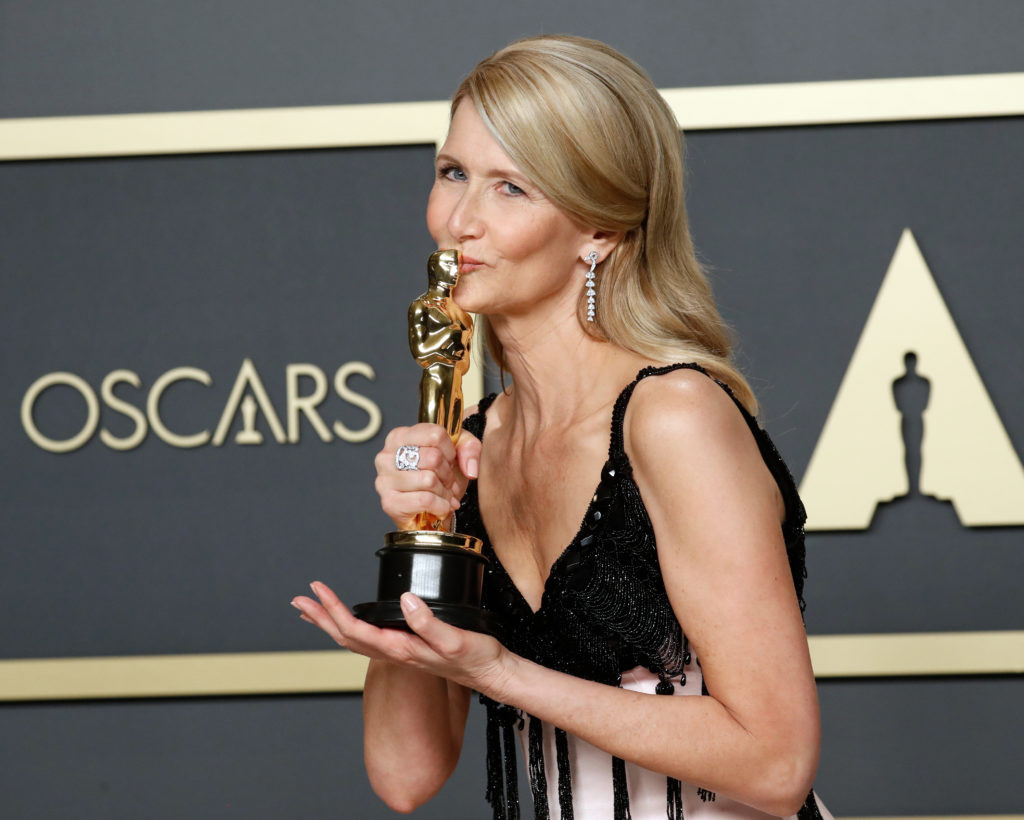 Laura Dern poses with the Oscar for Best Supporting Actress in a “Marriage Story” in the photo room at the 92nd Academy Awards in Hollywood, Los Angeles, California. Photo by Lucas Jackson/Reuters

Most of the early awards went according to forecasts, including Dern winning for her performance as a divorce attorney in Noah Baumbach’s “Marriage Story.” Accepting her first Oscar, Dern thanked her in-attendance parents, “my legends, Diane Ladd and Bruce Dern.”

For the 87th time, no women were nominated for best director this year, a subject that was woven into the entire ceremony — and even into some attendees’ clothing. Natalie Portman wore a cape lined with the names of female filmmakers who weren’t nominated for best director, including Lulu Wang (“The Farewell”), Greta Gerwig (“Little Women”) and Mati Diop (“Atlantics”).

Coming on a rare rainy day in Los Angeles, the ceremony was soggy and song-heavy. Some performances, like Eminem’s performance of “Lose Yourself,” were unexpected (and drew a wane response from Martin Scorsese). All of the song nominees performed, including Elton John who won with his longtime songwriting partner Bernie Taupin for their “Rocketman” tune.

The hostless ceremony opened on a note of inclusion, with Janelle Monae performing “A Beautiful Day in the Neighborhood” and her own song, “Come Alive,” with an assist from Billy Porter. “I’m so proud to be standing here as a black queer artist telling stories,” Monae said. “Happy Black History Month.”

There were milestones, nevertheless. In winning best adapted screenplay for his Nazi satire “Jojo Rabbit,” the New Zealand filmmaker Taika Waititi became the first indigenous director ever to win an Oscar. He dedicated the award to “all the indigenous kids in the world who want to do art, dance and write stories.”

“We are the original storytellers,” Waititi said. 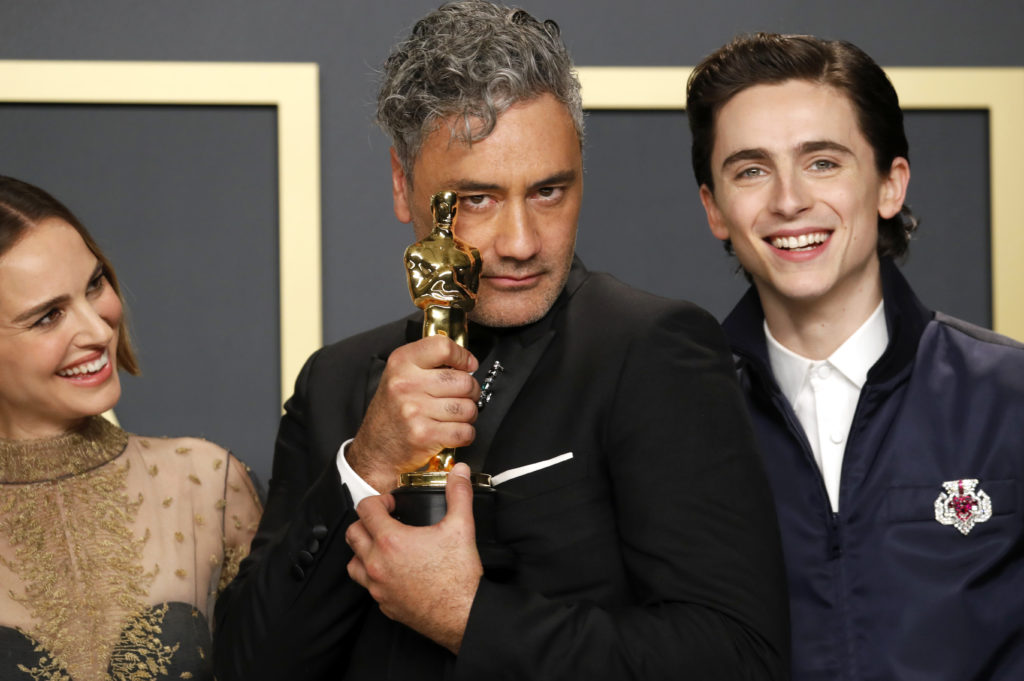 Taika Waititi poses with the award for Best Adapted Screenplay for “Jojo Rabbit” with presenters Timothee Chalamet and Natalie Portman in the photo room during the 92nd Academy Awards in Hollywood, Los Angeles, California. Photo by Lucas Jackson/Reuters

“Joker” composer Hildur Gudnadottir became only the third woman to ever win best original score. “To the girls, to the women, to the mothers, to the daughters who hear the music opening within, please speak up,” said Gudnadottir. “We need to hear your voices.”

Awards were spread around to all of the best-picture nominees, with the lone exception being Martin Scorsese’s 10-time nominee “The Irishman.”

Netflix came in with a leading 24 nominations. Along with the win for “Marriage Story,” the streamer’s “American Factory” won best documentary. The film is the first release from Barack and Michelle Obama’s Higher Ground Productions. No studio has spent more heavily this awards season than Netflix, which is seeking its first best picture win after coming up just shy last year with “Roma.” 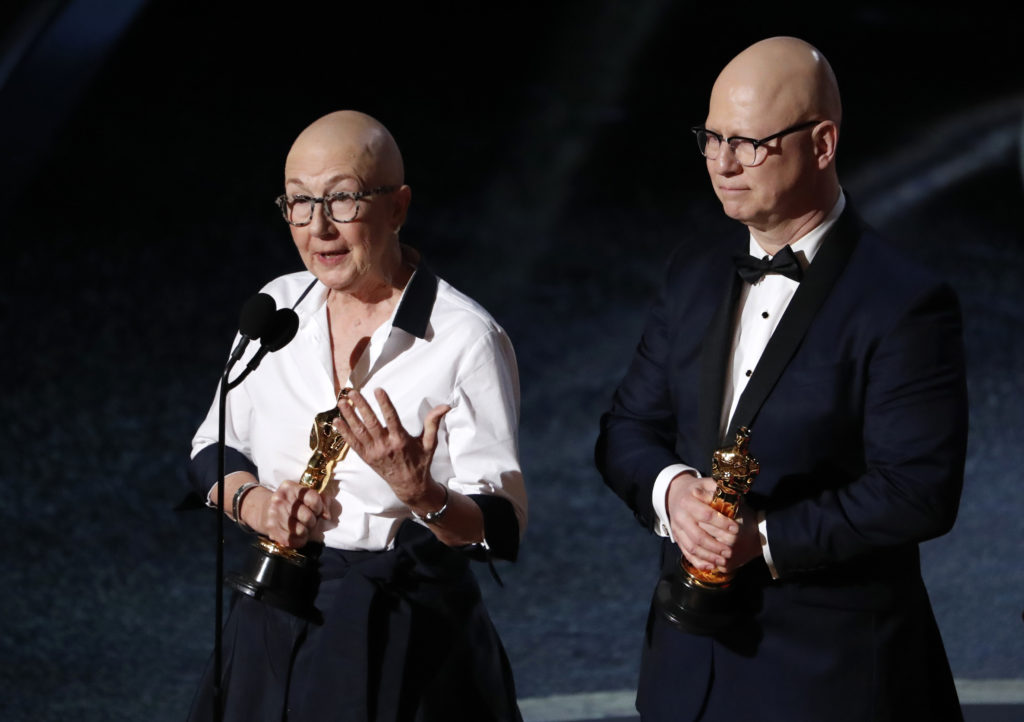 Pixar extended its domination of the best animated film category, winning for “Toy Story 4.” It’s the 10th Pixar film to win the award and second “Toy Story” film to do so, following the previous 2010 installment.

It was an early award for the Walt Disney Co. which despite last year amassing a record $13 billion in worldwide box office and owning the network the Oscars are broadcast on, played a minor role in the ceremony. The bulk of its awards came from 20th Century Fox (“Ford v Ferrari”) and Fox Searchlight (“Jojo Rabbit”), both of which the company took control of after its $71.3 billion acquisition of 21st Century Fox last year.

Disney’s ABC, which is broadcasting the show live, hoped a widely watched field of nominees — including the $1 billion-grossing “Joker,” up for a leading 11 awards — will help viewership. Last year’s show garnered 29.6 million viewers, a 12% uptick.

In a year of streaming upheaval throughout the industry, this year’s Oscar favorites were largely movies released widely in theaters. They also predominantly featured male characters and came from male directors.

After a year in which women made significant gains behind the camera, no female directors were nominated for best director. The acting categories are also the least diverse since the fallout of #OscarsSoWhite pushed the academy to remake its membership. Cynthia Erivo (“Harriet”) is the only actor of color nominated. Those results, which have been a topic in speeches through awards season, stand in contrast to research that suggests the most popular movies star more people of color than ever before.